IWM - Bullish into the summer

Good morning. Here is something to begin your opex Friday.... 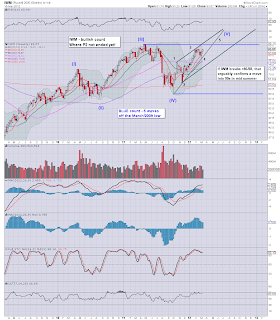 This is similar to the SP' chart I've posted a few times lately, the 'p3 ain't even started yet' theory. Without question, we have a bull flag being confirmed, and a move to 85/87 within the next few weeks looks comfortably viable.


The Swans are not being allowed to land

Despite all the Black Swans circling (and there are a LOT of them)..none of them are currently permitted to land by the Bernanke. I kinda picture him with a ground to air missile battery, and he is very much still in control.  Occasionally he'll fire off a few missiles, take out any of those Swans that are looking to land.

IWM targets:
near term: a break above the recent high of 83 - 84/85 confirms the bull flag

Yeah, the Permabear is now Long. A very difficult few buttons to press, but its my 'best guess'.

It could easily be the sign of a top (often is), but..the weekly chart says UP UP UP, at least to test 86 within a few weeks. I've done all I can. 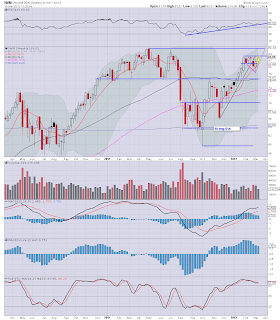