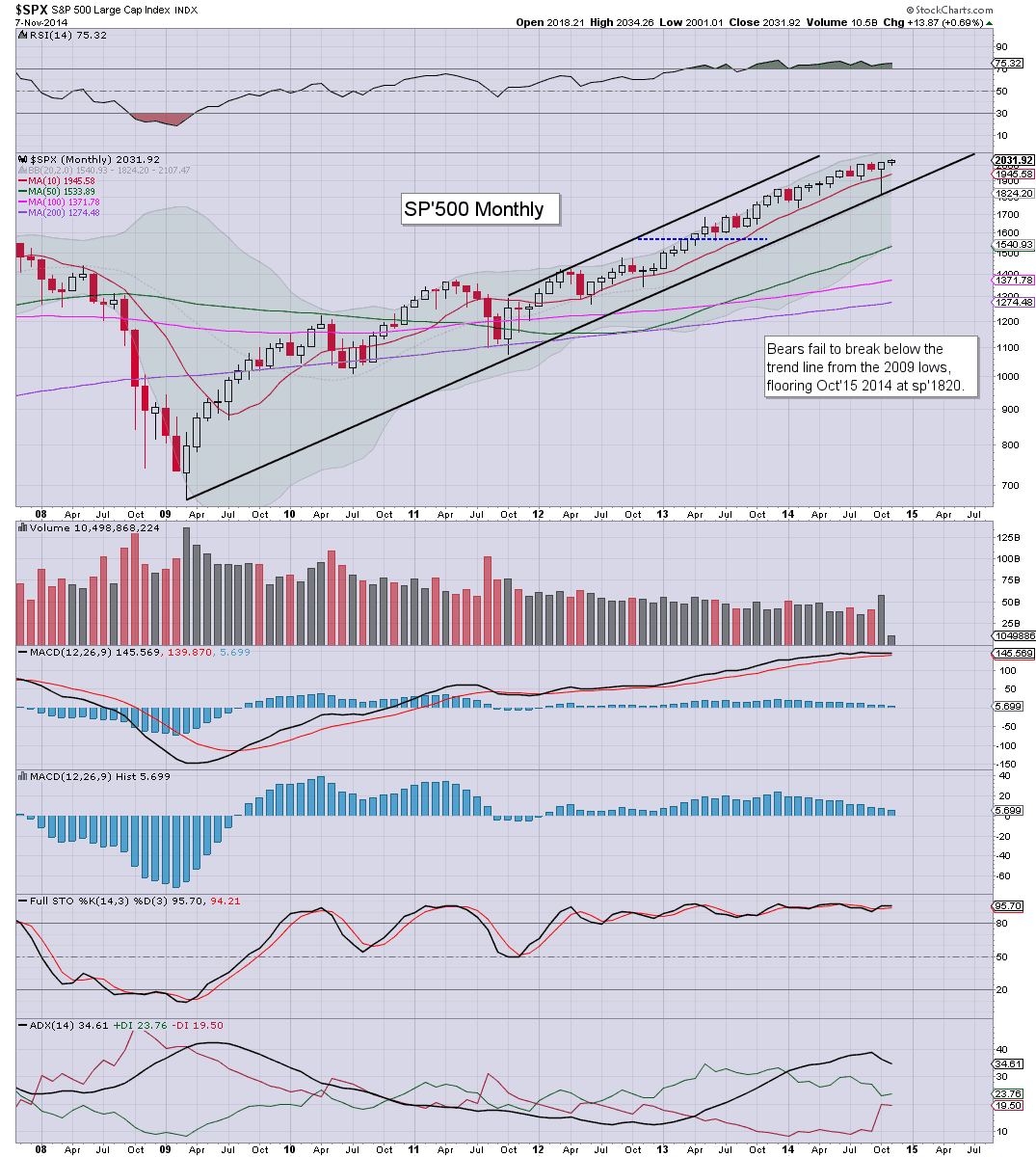 A new historic high of 2034, with the sp'500 having climbed 214pts across 18 trading days.. an incredible gain of 11.7%. Underlying MACD (blue bar histogram) continues to tick lower, despite the huge ramp from mid October.

What is most stark, the closing candle for October... a spike-floor candle just 1% above rising support of sp'1800, it bodes very bullish for the remainder of the year. Indeed, 1820 is now a key floor, and frankly, it looks unlikely that the bears will be able to break below it for some months... perhaps.... some years. 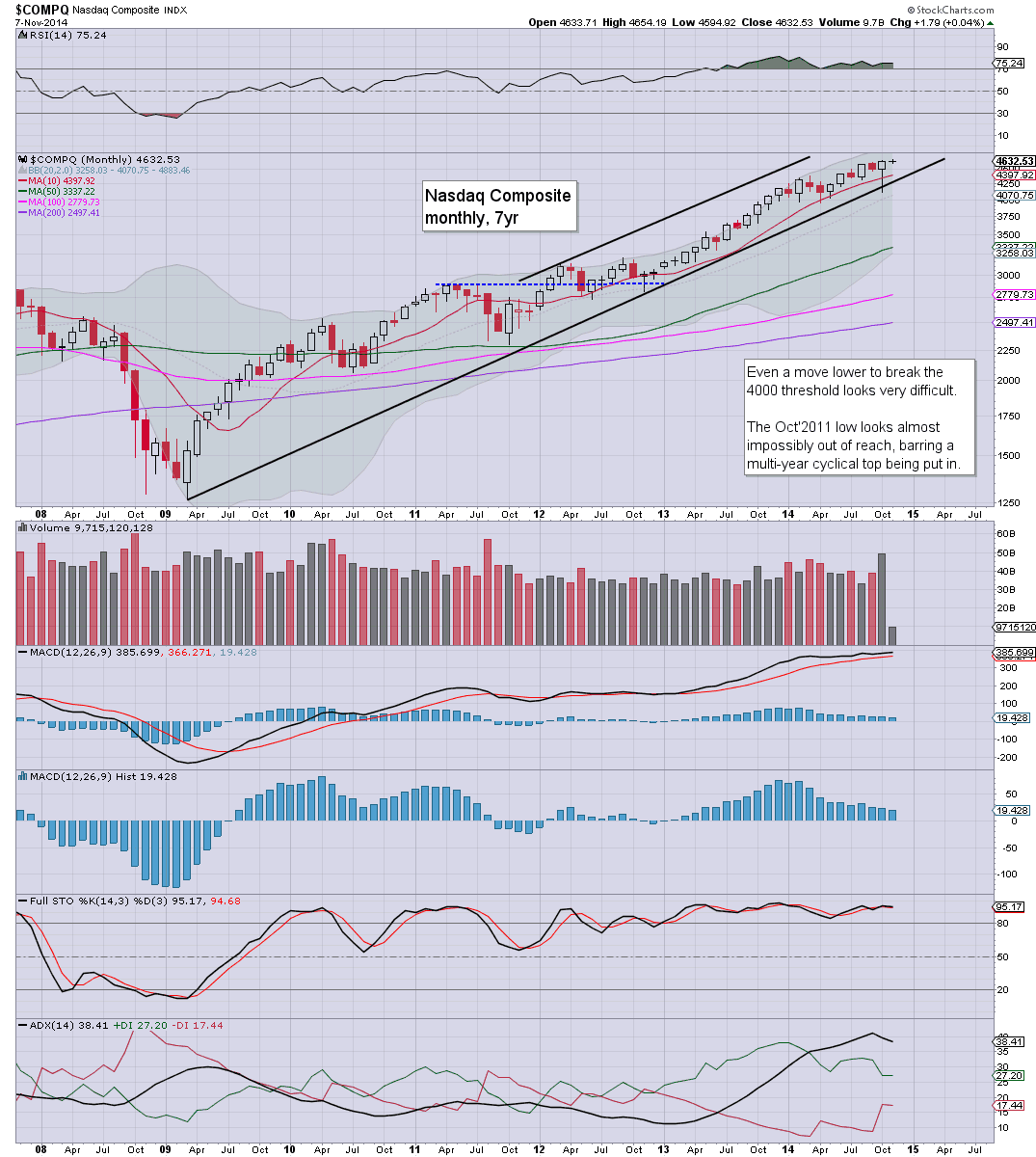 The Nasdaq Comp' is now just 500pts shy of the March 2000 high of 5132. With a spike-floor candle in October, the bulls are back in full command, and we're charging higher. At the current rate of increase, the all time high will be exceeded in April/May 2015. 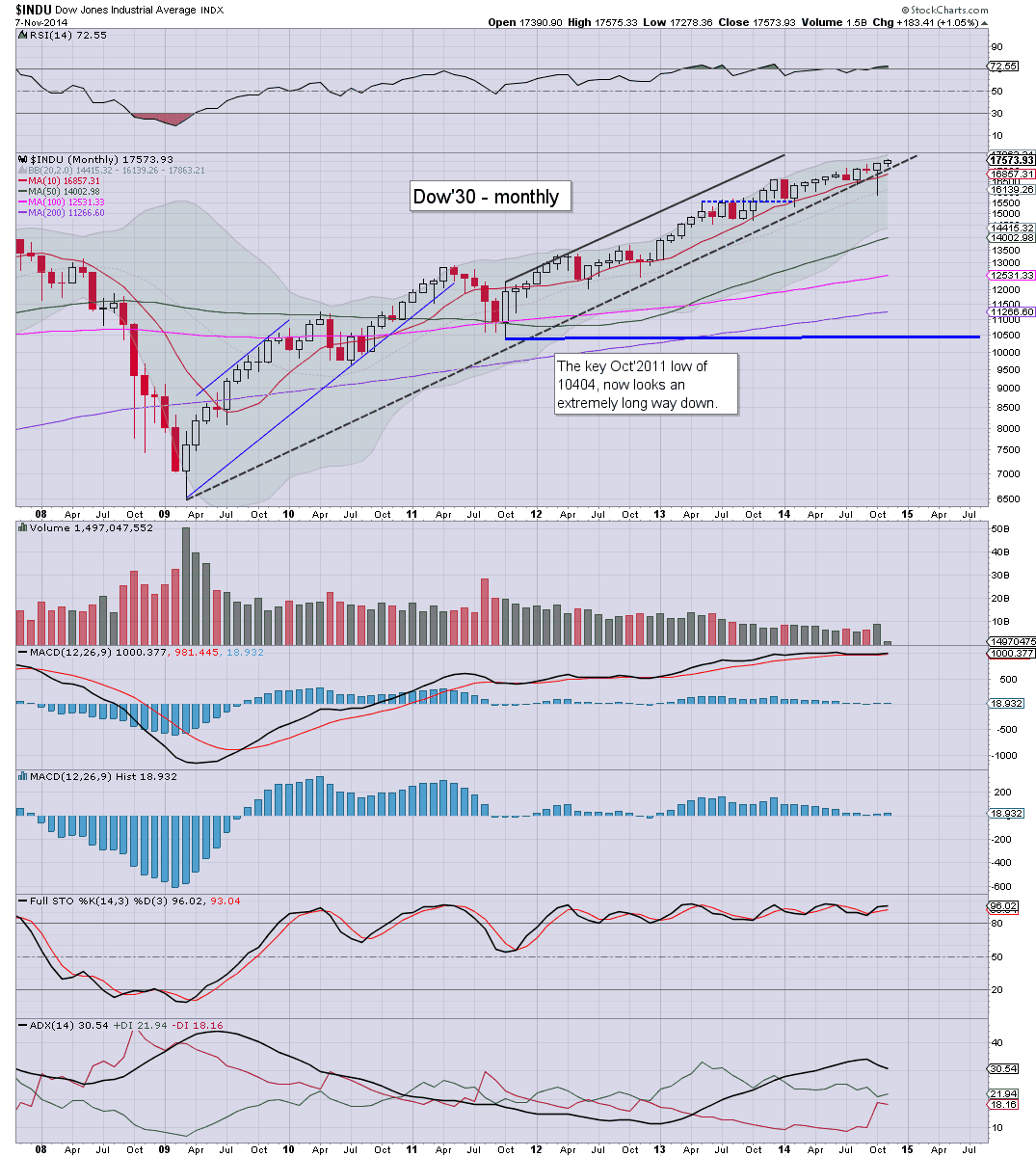 The Dow has climbed 1718pts since the mid October low of 15855, a clear gain of 10%. On any basis this should be a huge relief to the bulls, as the Dow had broken the key rising trend. With the ongoing ramp into the 17500s, the underlying MACD cycle has turned positive.. and looks primed to climb into early 2015. 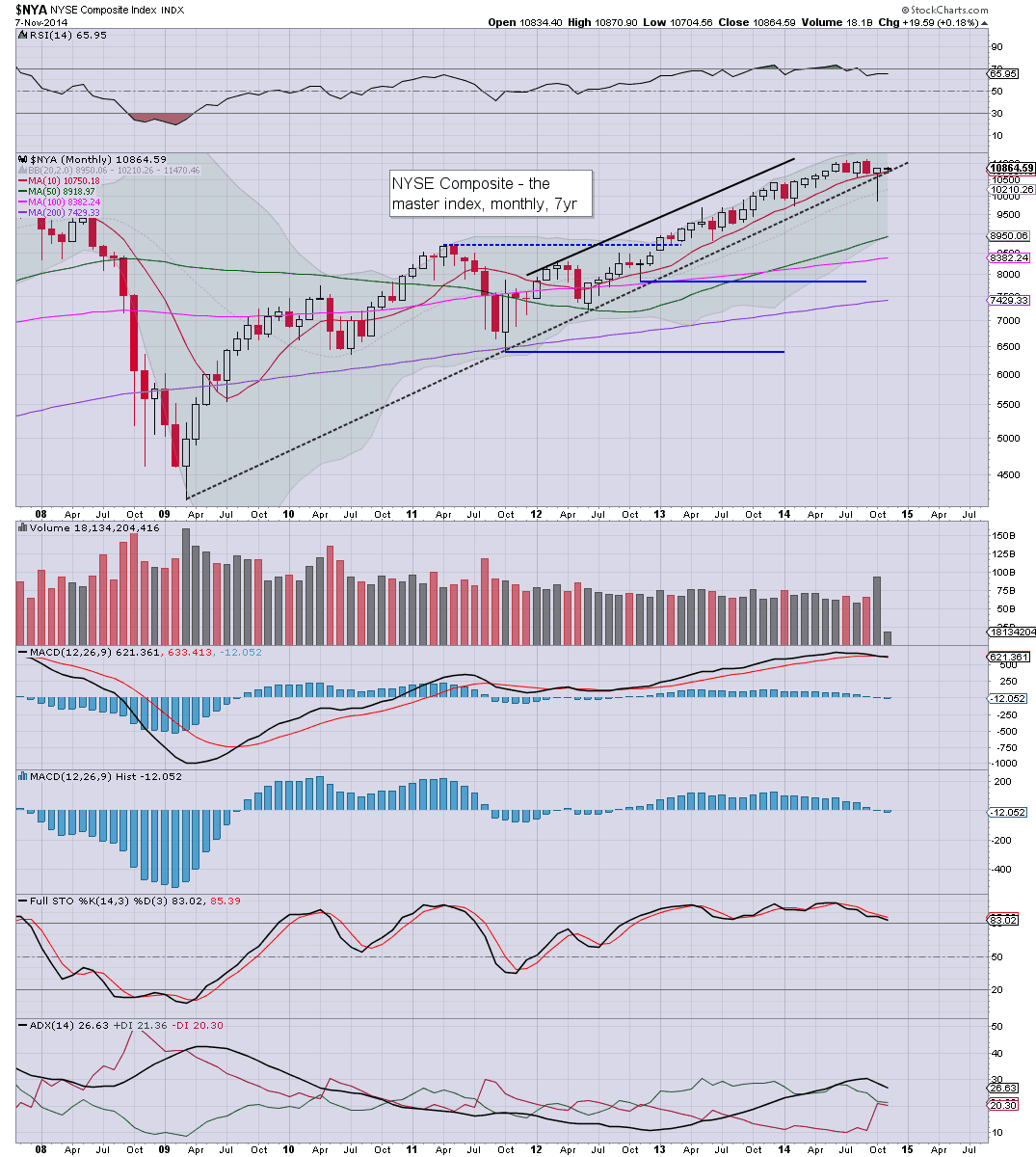 The master index continues to climb, having briefly lost the 10k level in mid October. A November close in the 11000s looks viable, which will open up the 11300s by year end. Despite the 18 days of recovery, underlying MACD remains marginally negative. 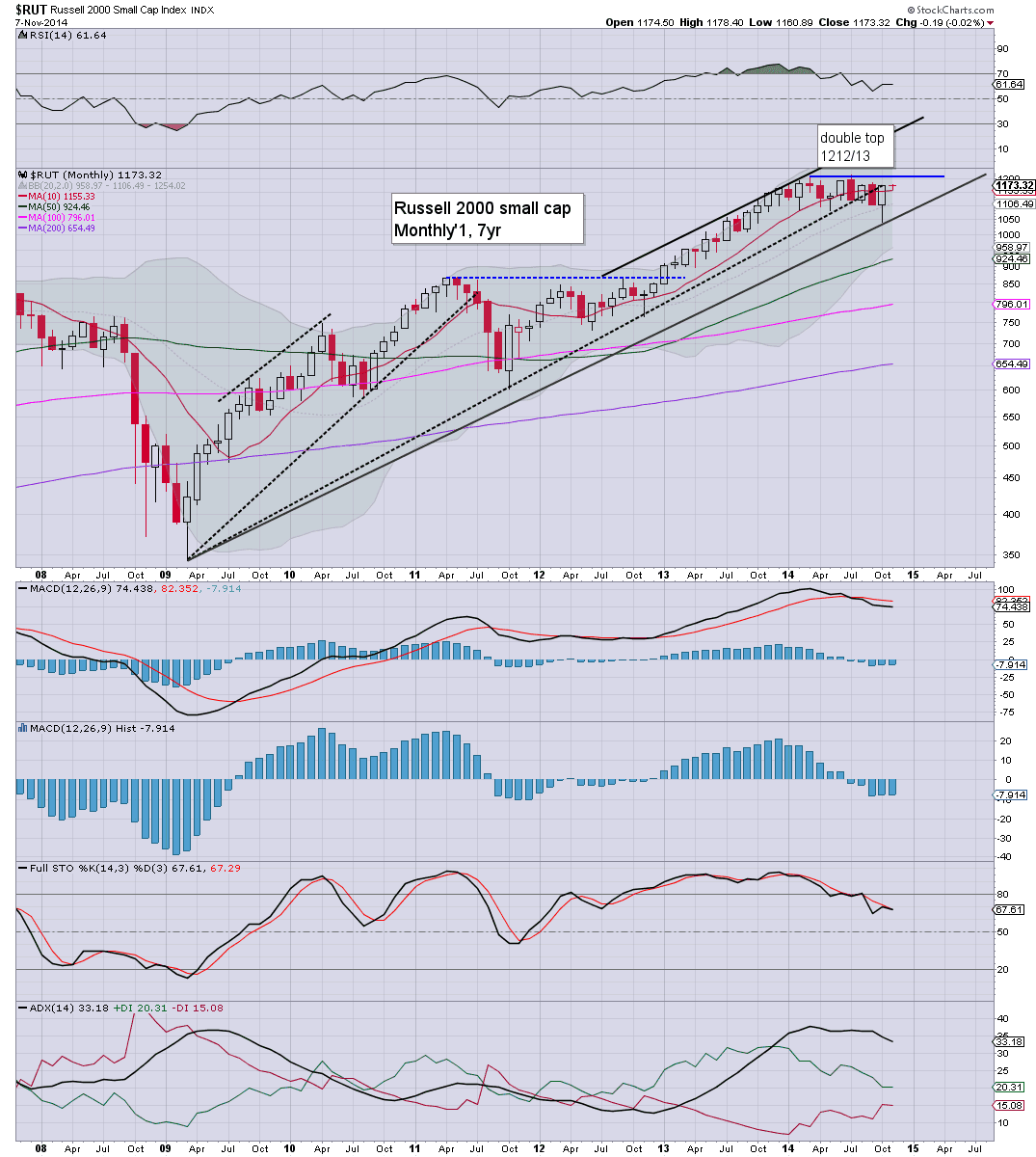 Underlying price momentum remains negative for the fifth consecutive month, but it looks like the R2K is going to get the opportunity to turn positive cycle in late Dec/early Jan. 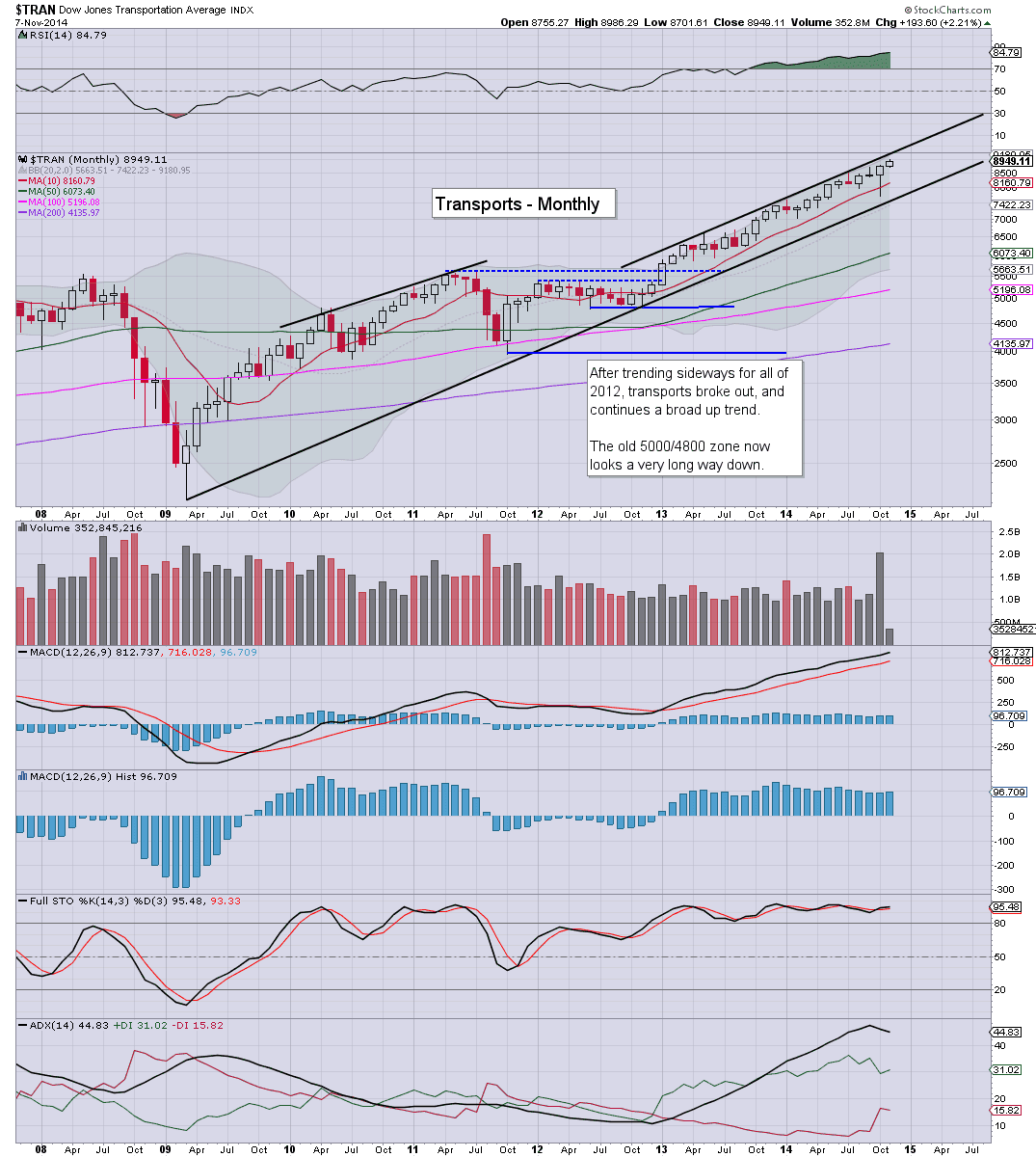 The old leader - Trans, is currently higher for the ninth month of 11 this year.. and those 2 monthly declines were only fractionally negative.

The transports is especially sensitive to energy prices, and with Oil already in the $70s (and set for 65/60 by spring 2015), it will be an extra positive for all those energy hungry companies.

Trans could easily be in the 9000s next week, and it would seem the only issue now is when 10k will be hit. No doubt, that will garner some media/trader attention... although 10k seems more likely in Jan/Feb.

With new historic highs for the Dow, Transports, and sp'500... along with a post 2009 high in the Nasdaq Comp', the equity market is back to an outright bullish posture. We have a clear spike low of sp'1820 from Oct'15th, and frankly, it looks like that won't be tested for many months.

Whilst the US Fed have concluded QE3, equity bears now face the Japanese putting in an underlying bid to not only the US... but ALL world markets.

There is very little scheduled next week. The only significant econ-data are retail sales on Friday. Fed official Bullard (gods damn him to a fiery volcano) is due to speak on Friday, and Mr Market will be listening.. as always.
--

Having not had a proper week off since early 2012... I'm getting somewhat close to burning out. I have no positions.. and will probably leave the market alone for some time. I will endeavour to continue posting here, but I sure as hell don't intend to hit the trading 'buy' button for the remainder of this year.

Back on Monday... probably.
Posted by Permabear Doomster at 17:00:00
Email ThisBlogThis!Share to TwitterShare to FacebookShare to Pinterest

Just another week for the bull maniacs 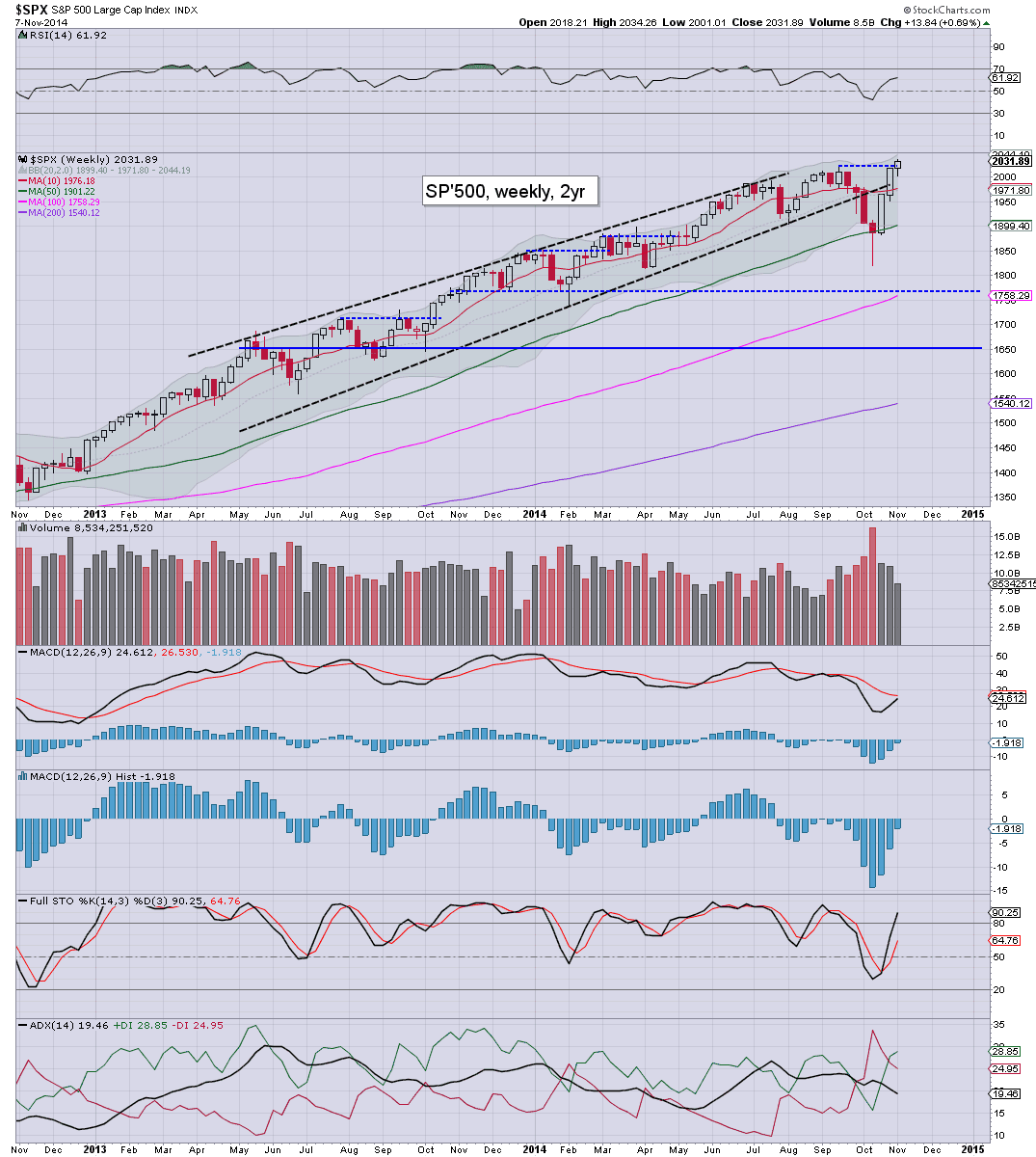 I'm tired... and for many equity bears, I think it has been a worse week than the previous two. After all, many expected a bounce of some significant degree.. into the mid 1900s. Yet.. here we are... continuing to power higher... way past the Alibaba high of 2019.


When will the current rally from sp'1820 stop? A short term retrace seems highly likely... but with each passing day, the downside target just gets higher and higher. Even the sp'1970s - around 3% lower, seem 'tough'. It would seem though that a retrace is all the bears are going to get, with a much bigger upside target.. at least to the 2130s.


Time for another glass of vodka

From now on, in my 'world monthly indexes' post, I will include Russia (I will drop Italy). The Russian market has had a really tough time since the initial bounce from spring 2009 into early 2011. 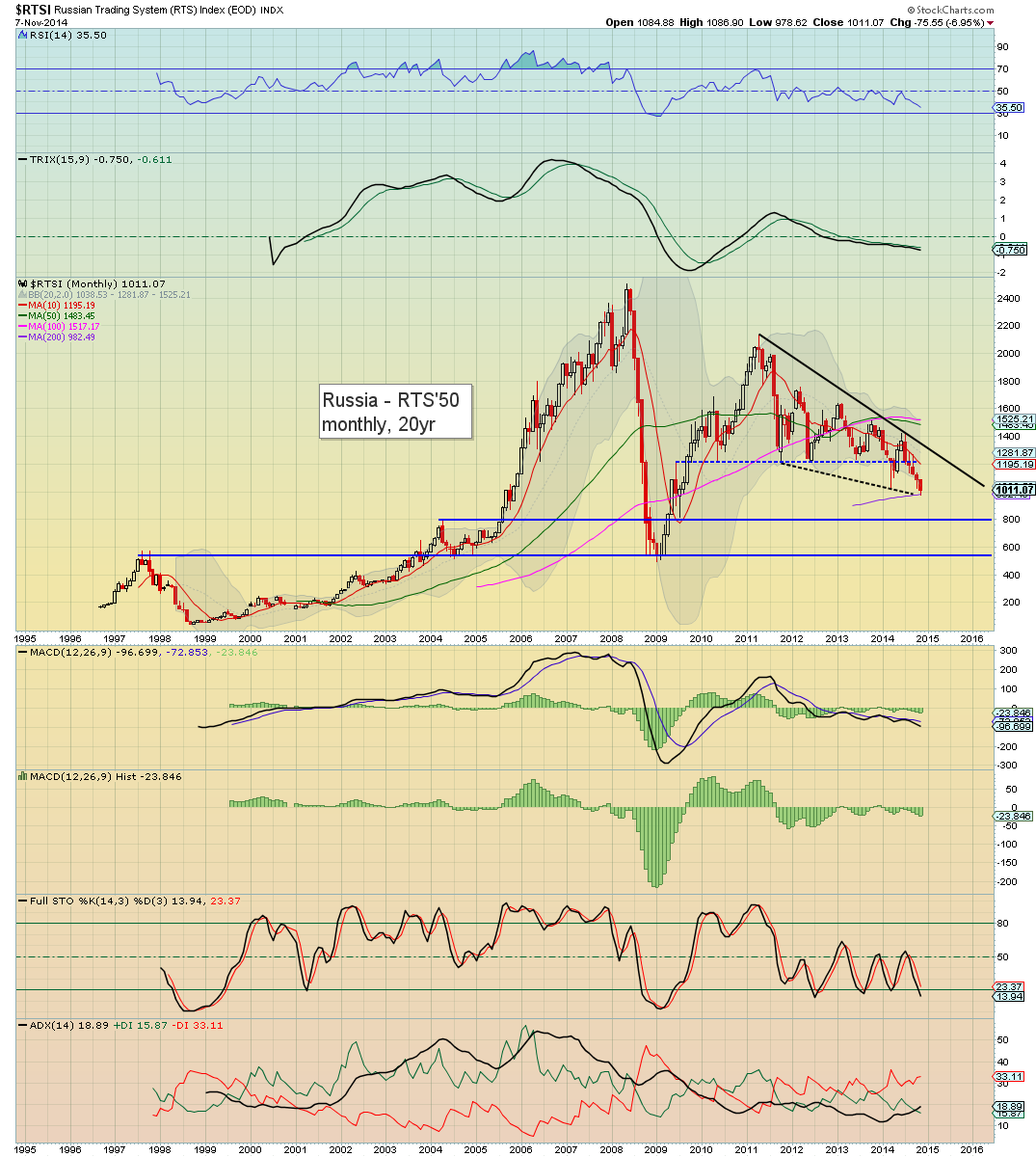 Today was the first time since Aug'2009, that the RTSI'50, went sub 1000. Just reflect upon the fact that whilst most US/EU indexes have all doubled up, the Russian market has effectively been cut in half.

At least to some degree, President Putin must be under some pressure from the Russian financial sector. No doubt falling oil prices are a large part of what is causing the latest equity down wave, since the summer equity peak.

Russian equity bulls need to see a monthly close in the 1400s, before they can get confident that the 3 year decline (giant bullish wedge?) is over.

--
*I have no positions, with little inclination to get involved in anything for the remainder of the year.

Goodnight from London
-
*the weekend post will be on the US monthly indexes
Posted by Permabear Doomster at 04:00:00
Email ThisBlogThis!Share to TwitterShare to FacebookShare to Pinterest 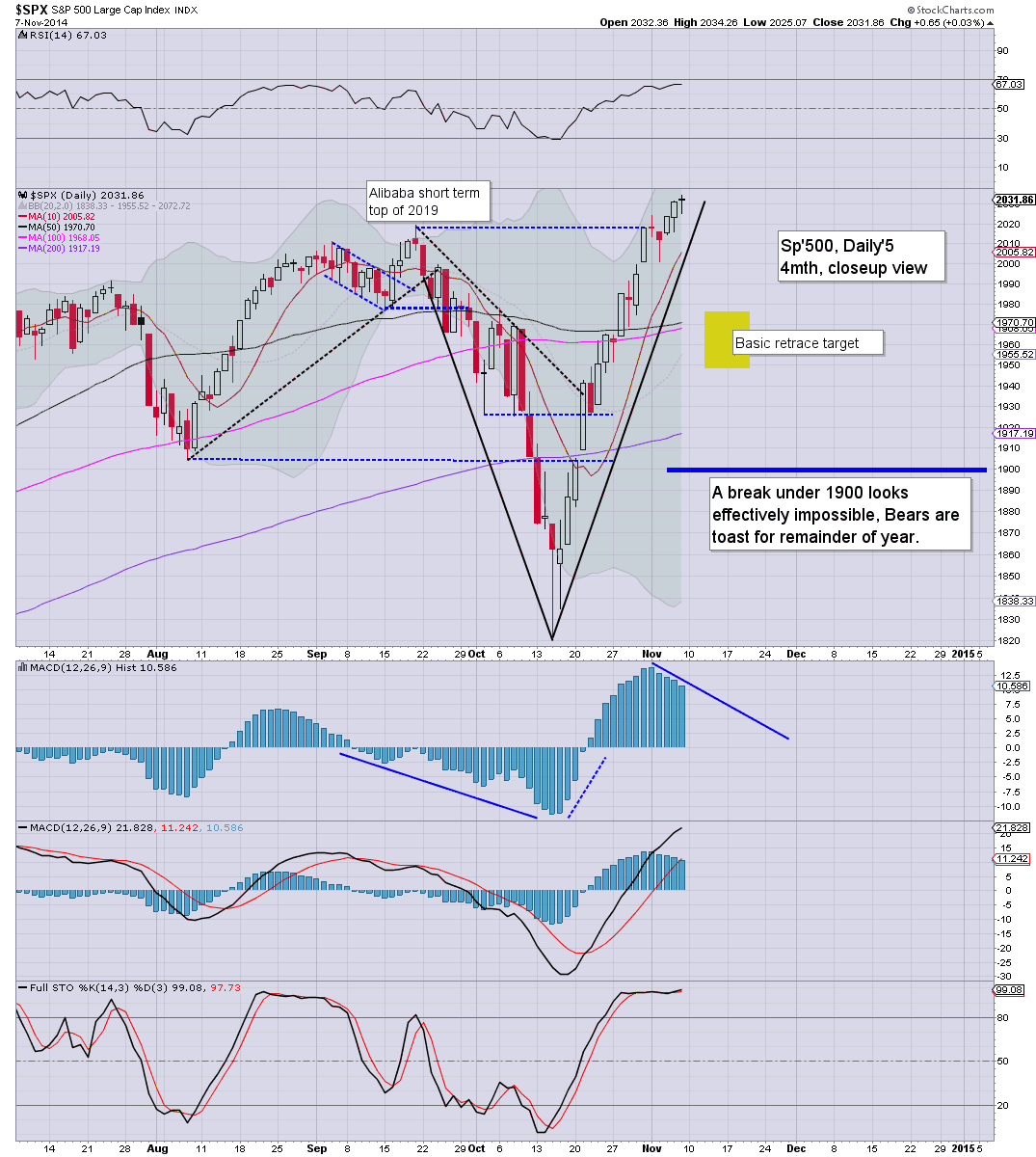 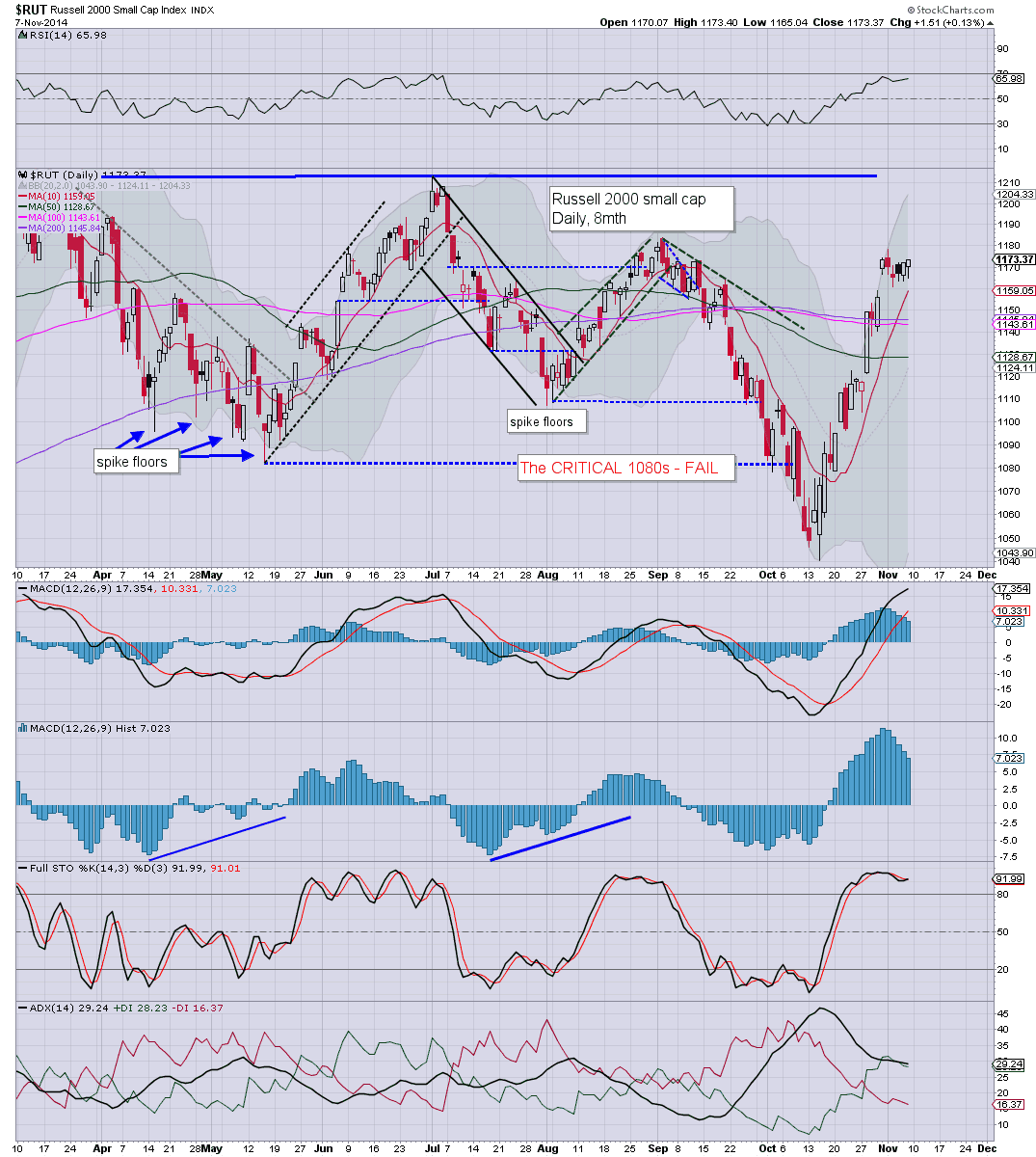 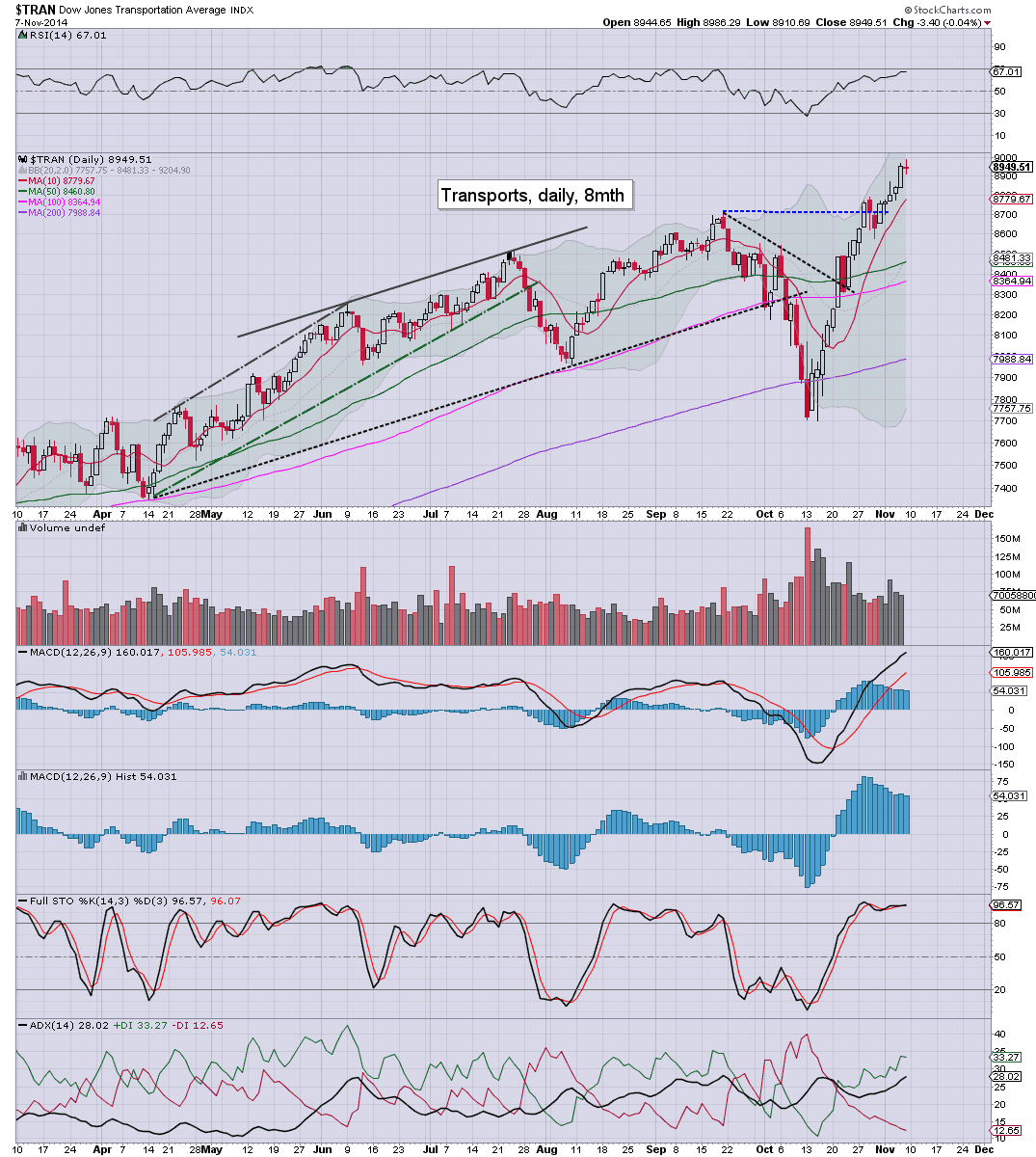