US equities closed moderately mixed, sp'500 u/c @ 1962. The two leaders - Trans/R2K, settled lower by -0.5% and -0.3% respectively. Near term outlook is bullish into late Tuesday, but Mr Market will have an excuse to sell lower on Wednesday, if the GDP data comes in as lousy as some expect. 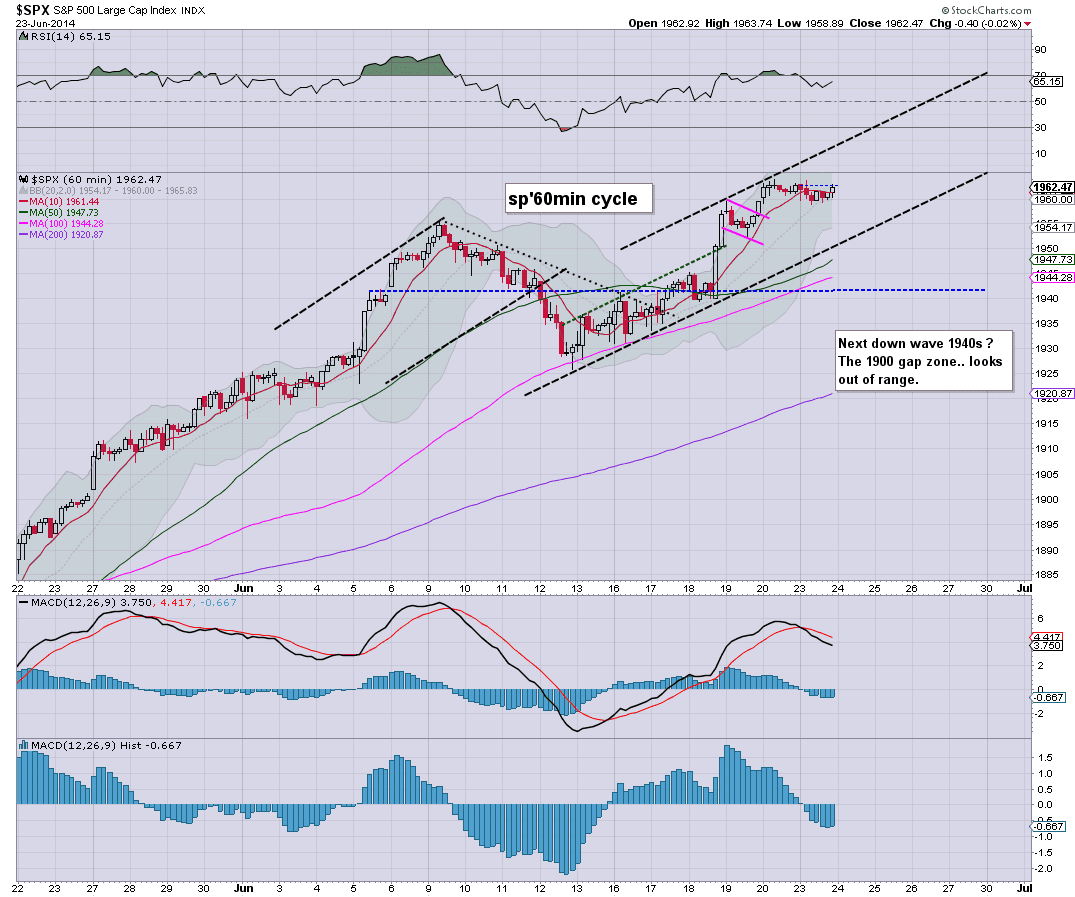 *another pair of games are kicking off..... and I'm going with Cameroon vs Brazil
---

Suffice to say...market is in churn mode.

A fair chance of a brief foray into the 1970s..before a minor multi-day down cycle, but really, I don't think its tradeable.
-

a daily wrap will be posted at 8pm EST

(updates are indeed lighter whilst the football continues!).
--
Posted by Permabear Doomster at 21:00:00
Email ThisBlogThis!Share to TwitterShare to FacebookShare to Pinterest

A quiet start to what will probably be a quiet week. Equity bears remain powerless, and even the sp'1940s look a stretch on the downside. Hourly charts are offering a further wave higher, to the 1970s tomorrow. Metals are holding minor gains, Gold +$3. 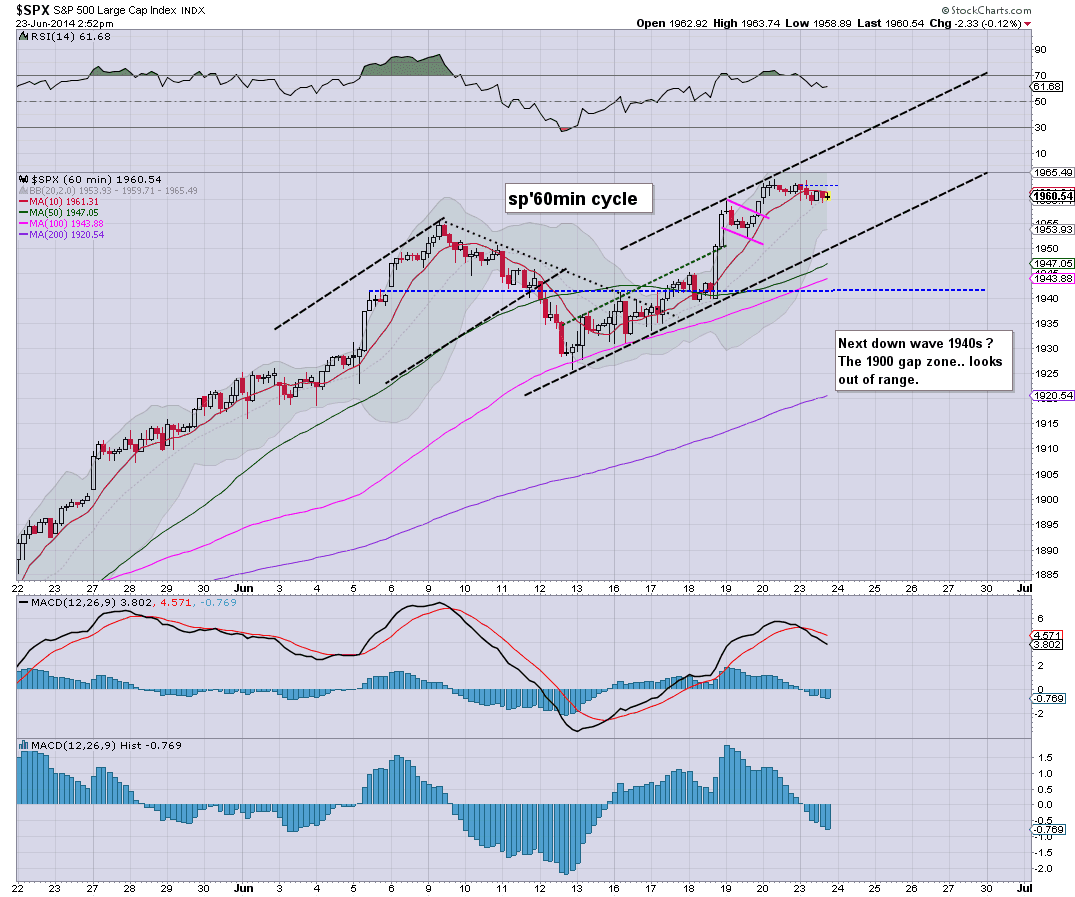 So..a pretty dull day...and frankly..that is likely to be the case for much of this week.

In some ways, I think market is going to remain in a holding pattern until the next set of earnings in 2-3 weeks.

-
*the train wreck that is WFM (which I remain long) is moderately higher, but even the big $40 looks a big level to break over..and more importantly..hold. I'll be surprised if this can break into the 43s before the July'4th long weekend. 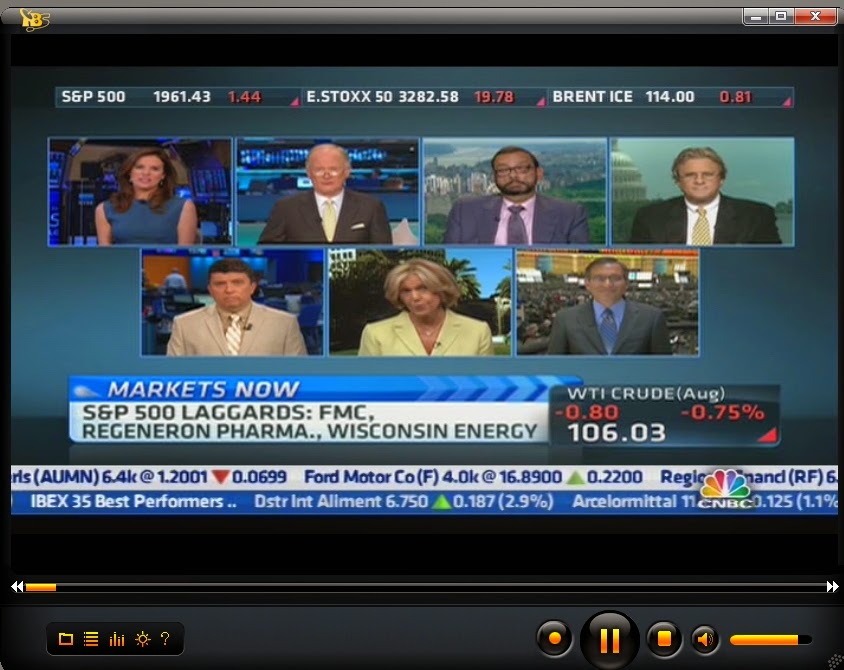 Can you work out which one?
-

The bear is calling for a 300pt sp' drop within 'the next few months'. The bears philosophy was that once we see a drop of 150pts..it would be enough to spook the mainstream into a further 150pt drop...

Interesting to see a doomer bear brought on by clown TV, other than Harry Dent. I guess the latter is on holiday.. somewhere on bear Island (Alaska?).

As many recognise....'broad upside' into mid July...and we'll see how we trade from there.

..back at the close
Posted by Permabear Doomster at 19:53:00
Email ThisBlogThis!Share to TwitterShare to FacebookShare to Pinterest

2pm update - another hour of churn

US indexes continue to see muted price action... and there really isn't anything to move things until the final reading for Q1 GDP this Wednesday morning. Metals are holding minor gains, Gold +$3. 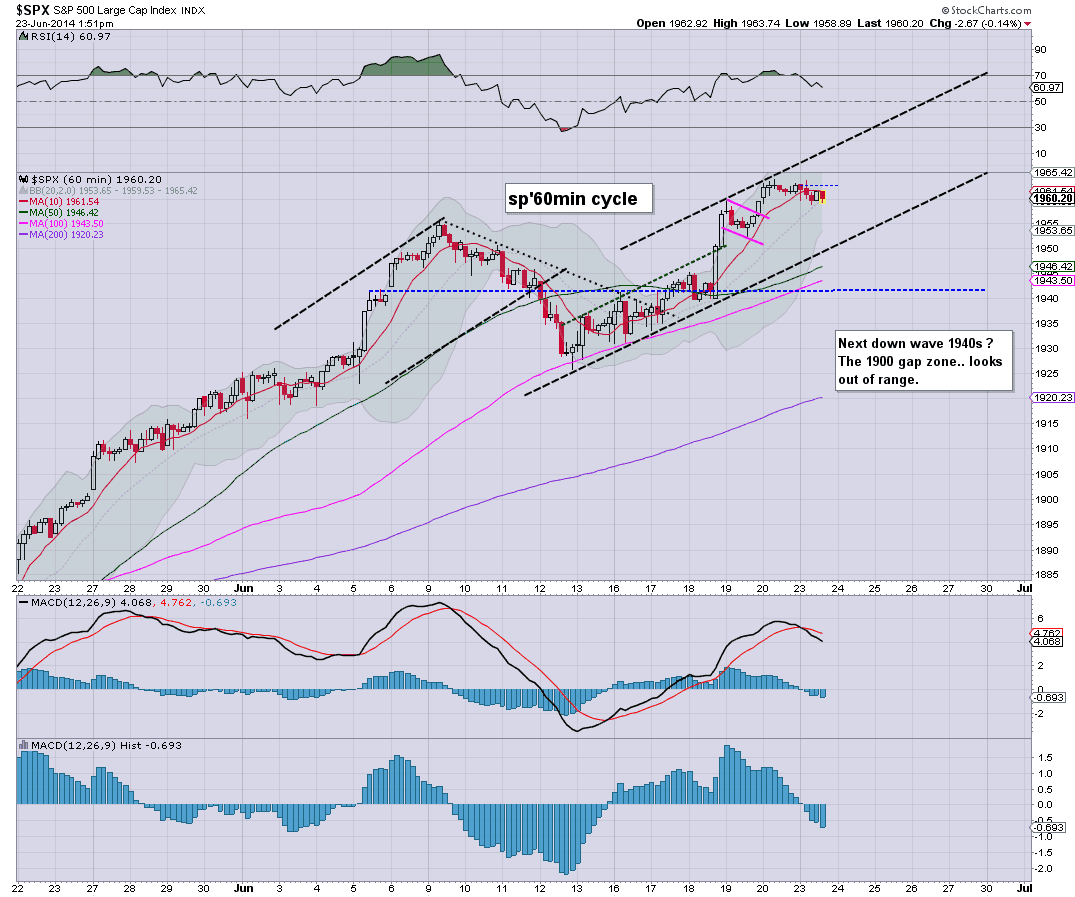 Yes, the above chart is even more 'bare bones' than in the last hour. There simply isn't much to note, other than it now looks, downside might be limited to 1940s.. perhaps... Wed/Thur?

Regardless, it is a lousy short, with the underlying MACD (blue bar histogram) already pretty low, and we could be in the 1970s tomorrow afternoon.
--

Since it was mentioned to me....

RIG - and the other drillers are doing okay. 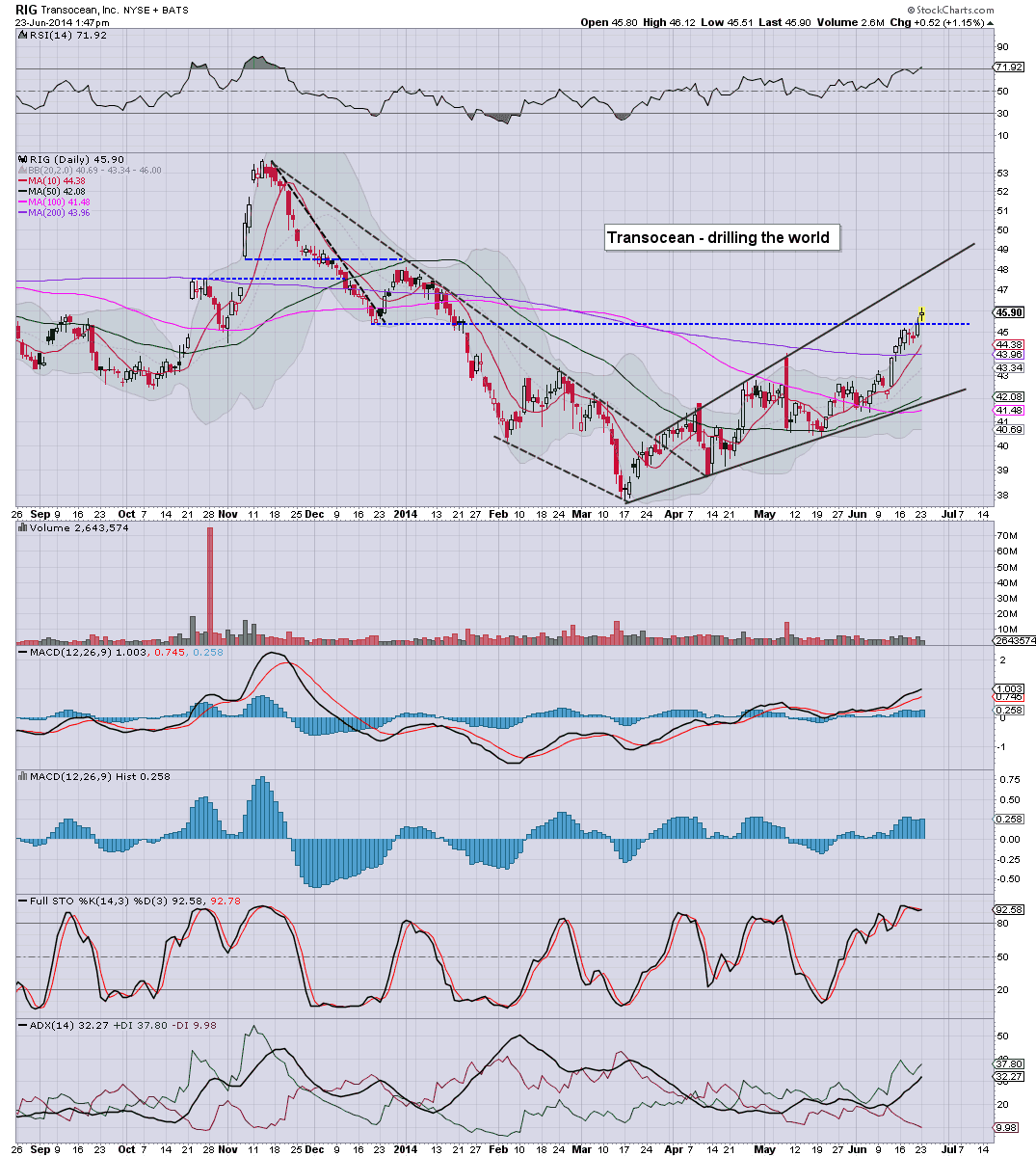 RIG looks to have easy upside into the 48/50 zone by mid July.

I have no position in RIG, having dropped on the earnings gap higher... which was when the stock got smashed -7% later that day.
-

Notable strength: FCX, +3%, and the miners ETF of GDX is also on the rise.
Posted by Permabear Doomster at 18:53:00
Email ThisBlogThis!Share to TwitterShare to FacebookShare to Pinterest 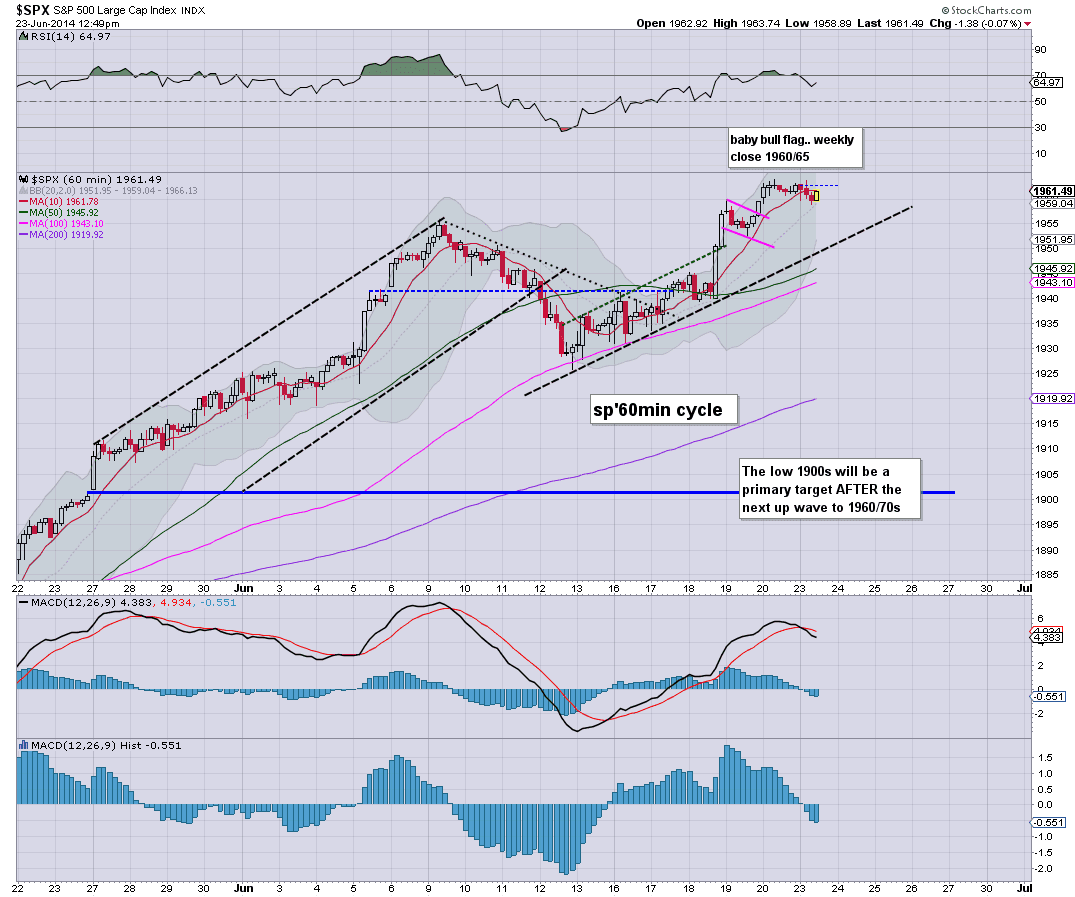 *So far..the football is only marginally less boring than the equity market. Hopefully the evening games will offer something more.
--

Suffice to say...market is content in churn mode...merely allowing all the smaller cycles to reset..before an attempt for the 1970s.

Regardless..there is nothing bearish here.
-

I have my attention on WFM. The one upside of today, the higher trading vol'. and price structure is suggestive a floor is in. The 41/42s look an awful way higher though.
Posted by Permabear Doomster at 17:54:00
Email ThisBlogThis!Share to TwitterShare to FacebookShare to Pinterest

12pm update - time for some games

Whilst the main US equity market is in micro churn mode.. there is little reason why everyone shouldn't have turned their attention to the far more important issue of which game to watch. Should it be Australia/Spain... or Holland/Chile? 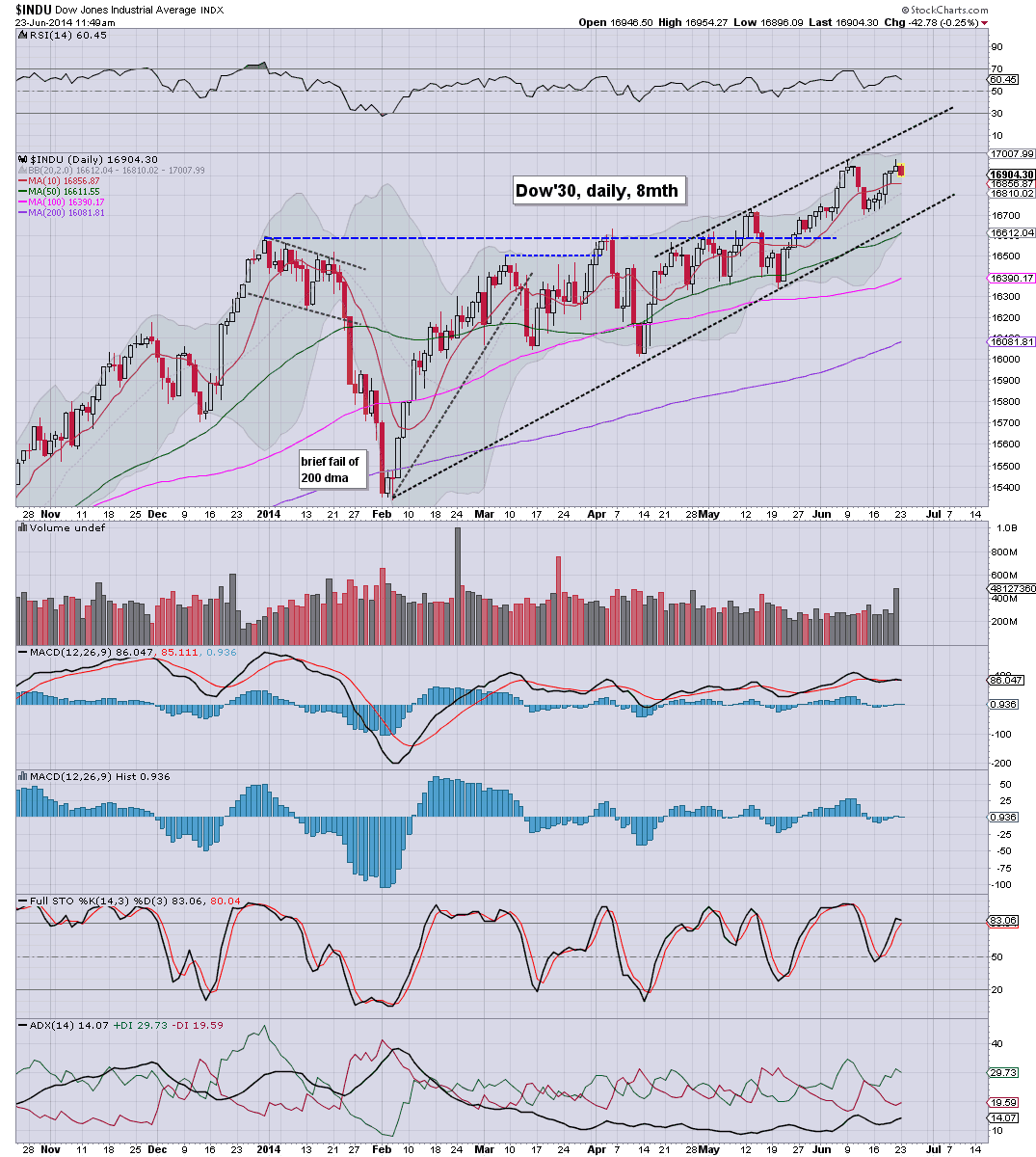 time for kick off....  (I'm going with the Chile game)
Posted by Permabear Doomster at 16:50:00
Email ThisBlogThis!Share to TwitterShare to FacebookShare to Pinterest

The week has started with minor chop for US equities, and this sort of price action could be the case across the week. VIX is higher, but at best..looks set to get stuck in the 12s. Metals are trying to resume the upward climb, Gold +$3. 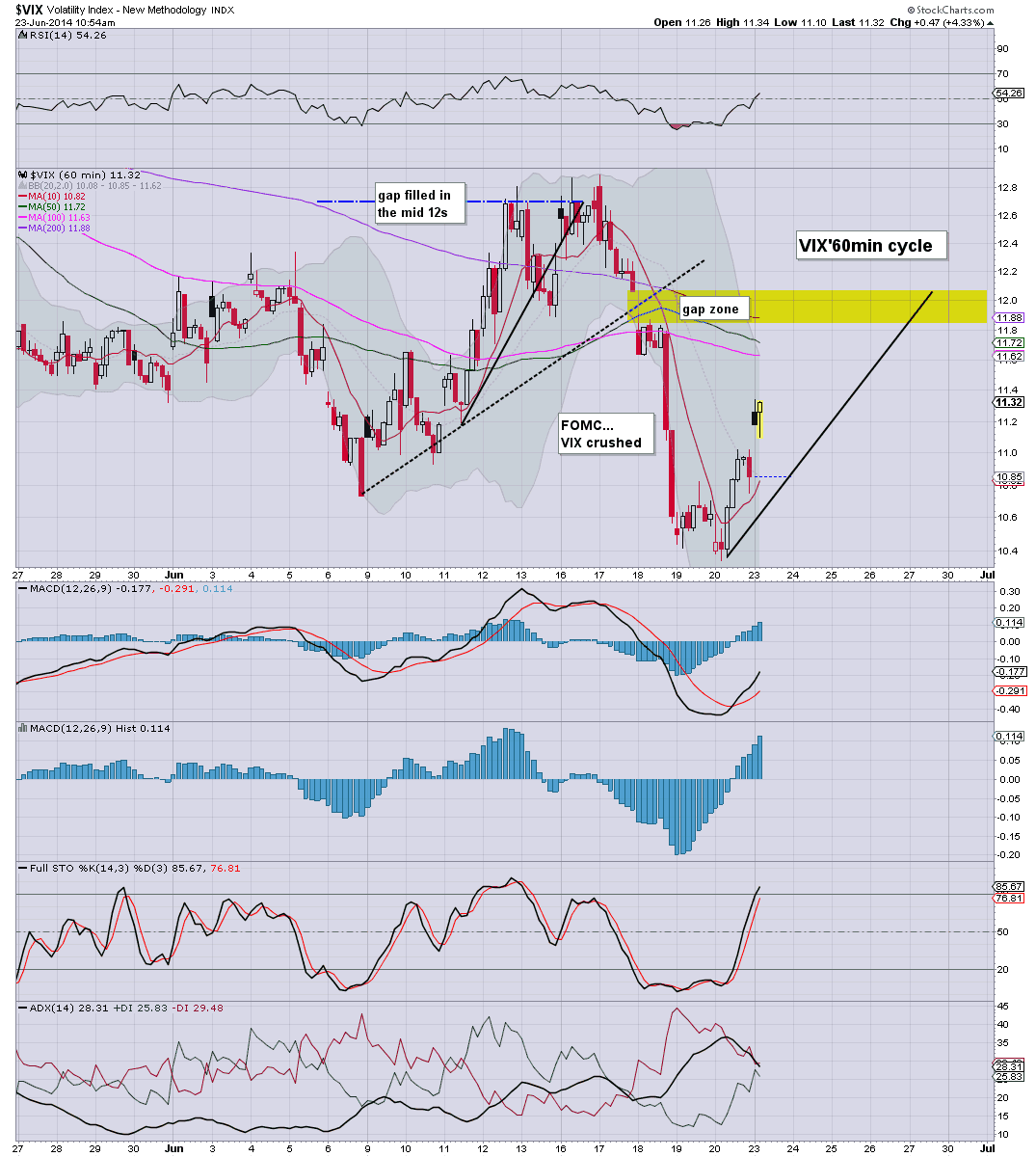 Little to add, and indeed, price action is somewhat muted.

Weekly charts are restrictive to the mid 1960s, whilst the daily charts just about offer 1970/75.. briefly

Regardless, there is no short trade here.
-

*WFM continues to attempt to cement a floor in the low $39s....a daily close in the 40s would be a start.
Posted by Permabear Doomster at 15:55:00
Email ThisBlogThis!Share to TwitterShare to FacebookShare to Pinterest

10am update - minor chop to begin the week

US indexes begin the week with minor chop. Underlying pressure remains to the upside, and todays QE (if small) will no doubt help negate what little sell side there is. Metals appear in consolidation mode.. before the next up wave. 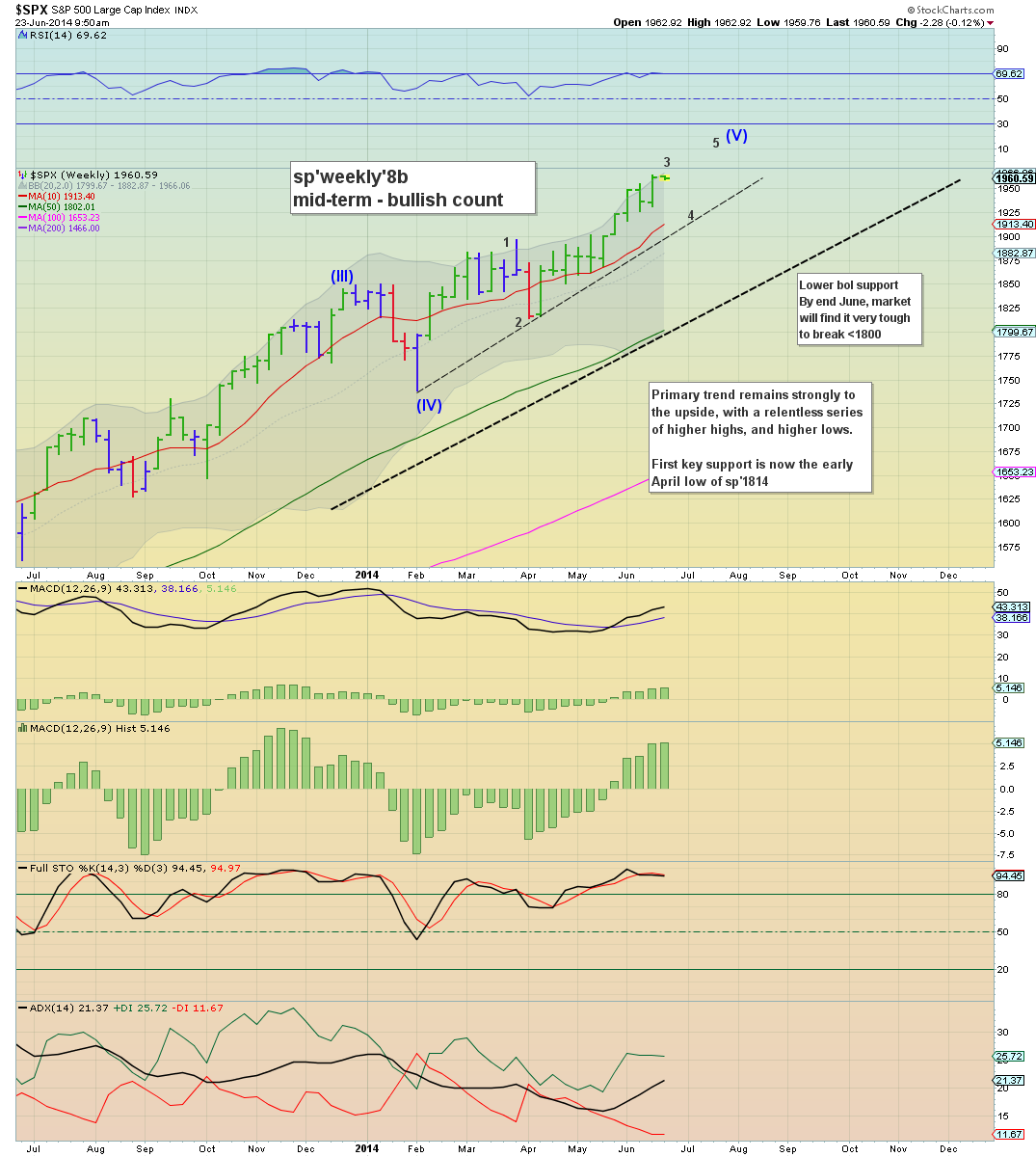 Certainly, the 80/90s look entirely out of range until July, but then, that is just next Tuesday!
--

Naturally, I have my eyes on the train wreck that is WFM. 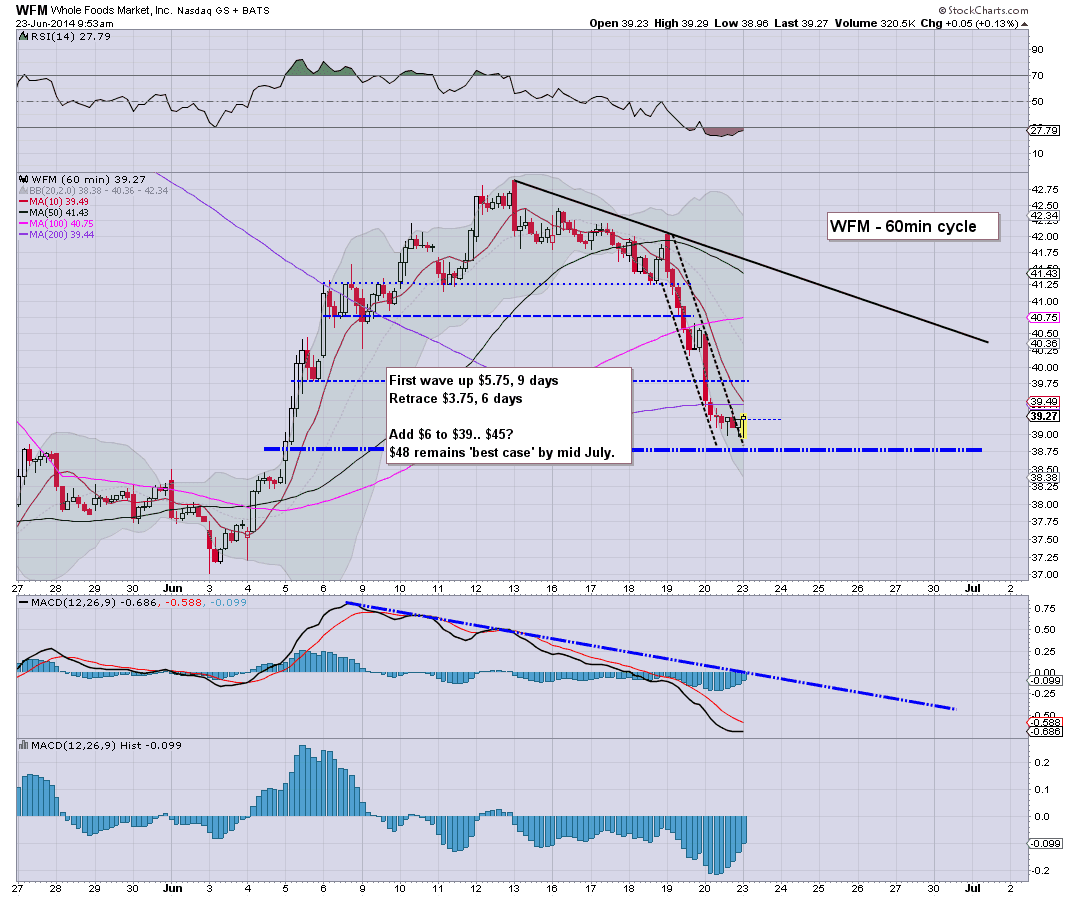 I could do with a break back into the 40s today...or tomorrow..if only to offer an initial sign that a floor is in.
-

Where is a takeover bid when I really need one?
-

*VIX is +2%, but still..only in the 11s.. even the teens look out of range.
Posted by Permabear Doomster at 14:54:00
Email ThisBlogThis!Share to TwitterShare to FacebookShare to Pinterest 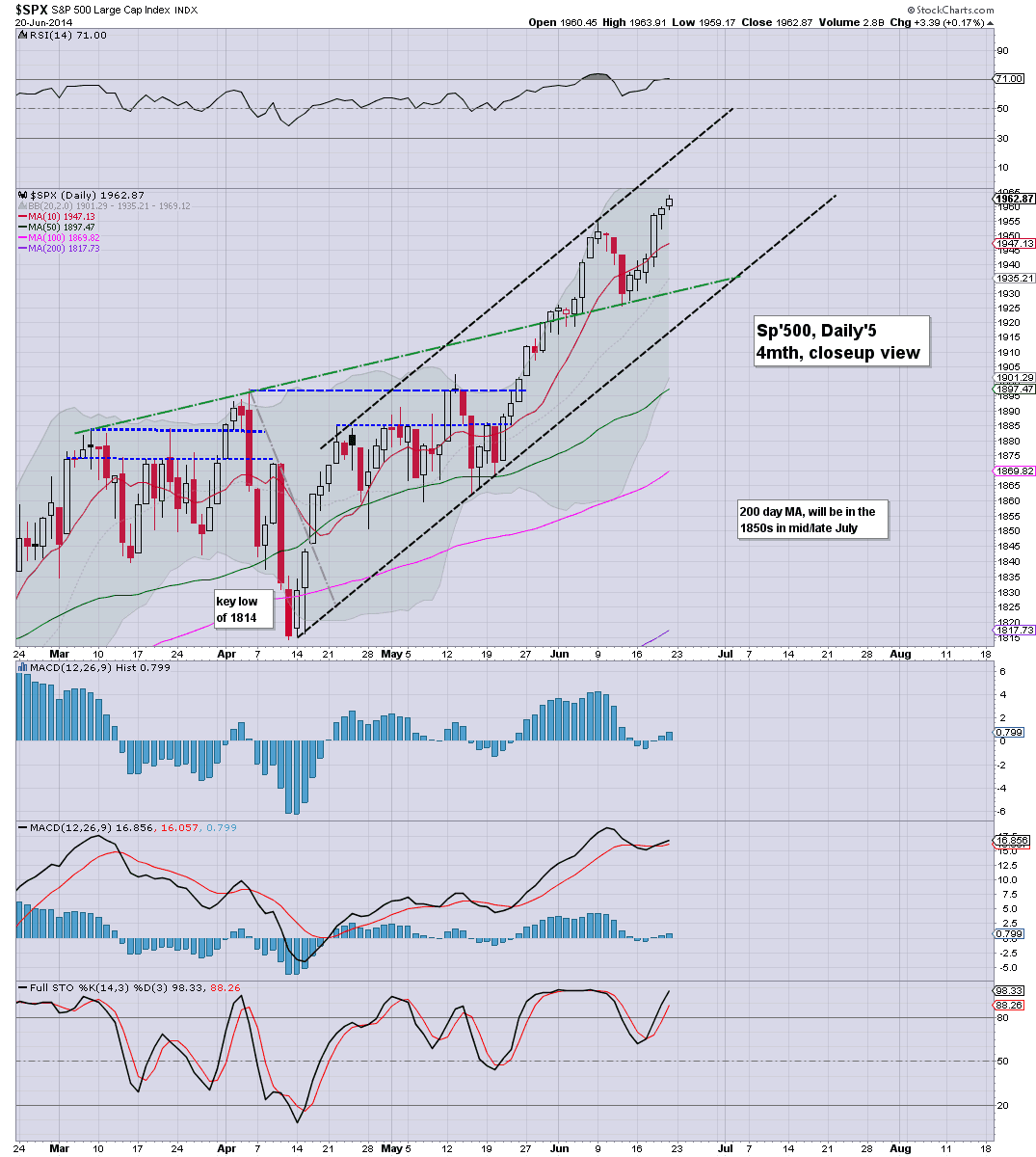 Well, I've little to add from what I noted at the weekend.
--

So...another week...with Wednesday being the day likely to offer a possible short term top, not that I think any downside is tradeable anyway.

Have a good week.
Posted by Permabear Doomster at 13:14:00
Email ThisBlogThis!Share to TwitterShare to FacebookShare to Pinterest
Newer Posts Older Posts Home
Subscribe to: Posts (Atom)