With equities closing with moderate gains, the VIX naturally melted lower, settling -3.1% @ 14.23, with an intraday floor of 13.97. Near term outlook is for the VIX to remain within the 15/12 zone. VIX 20s still look unlikely until April. 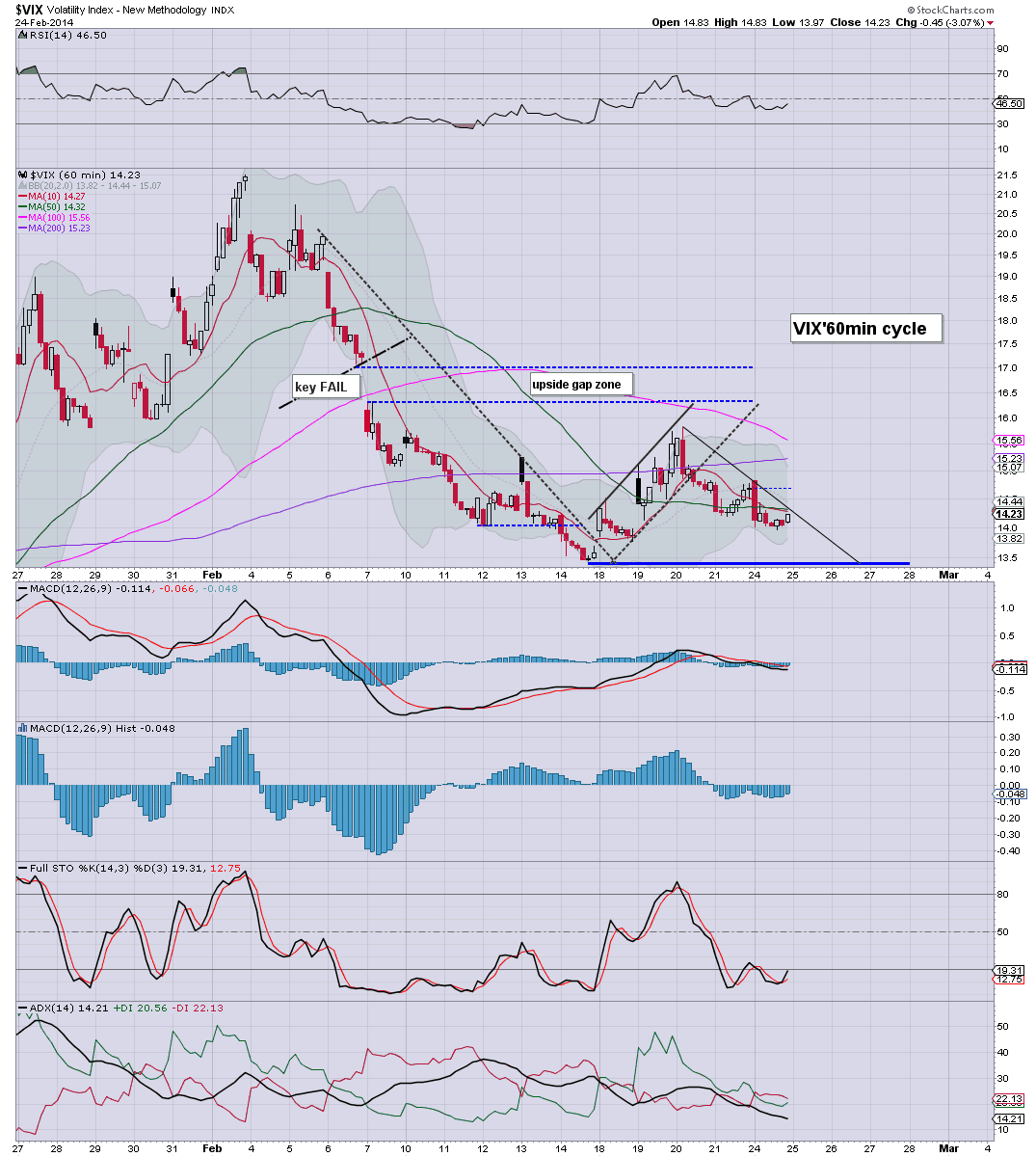 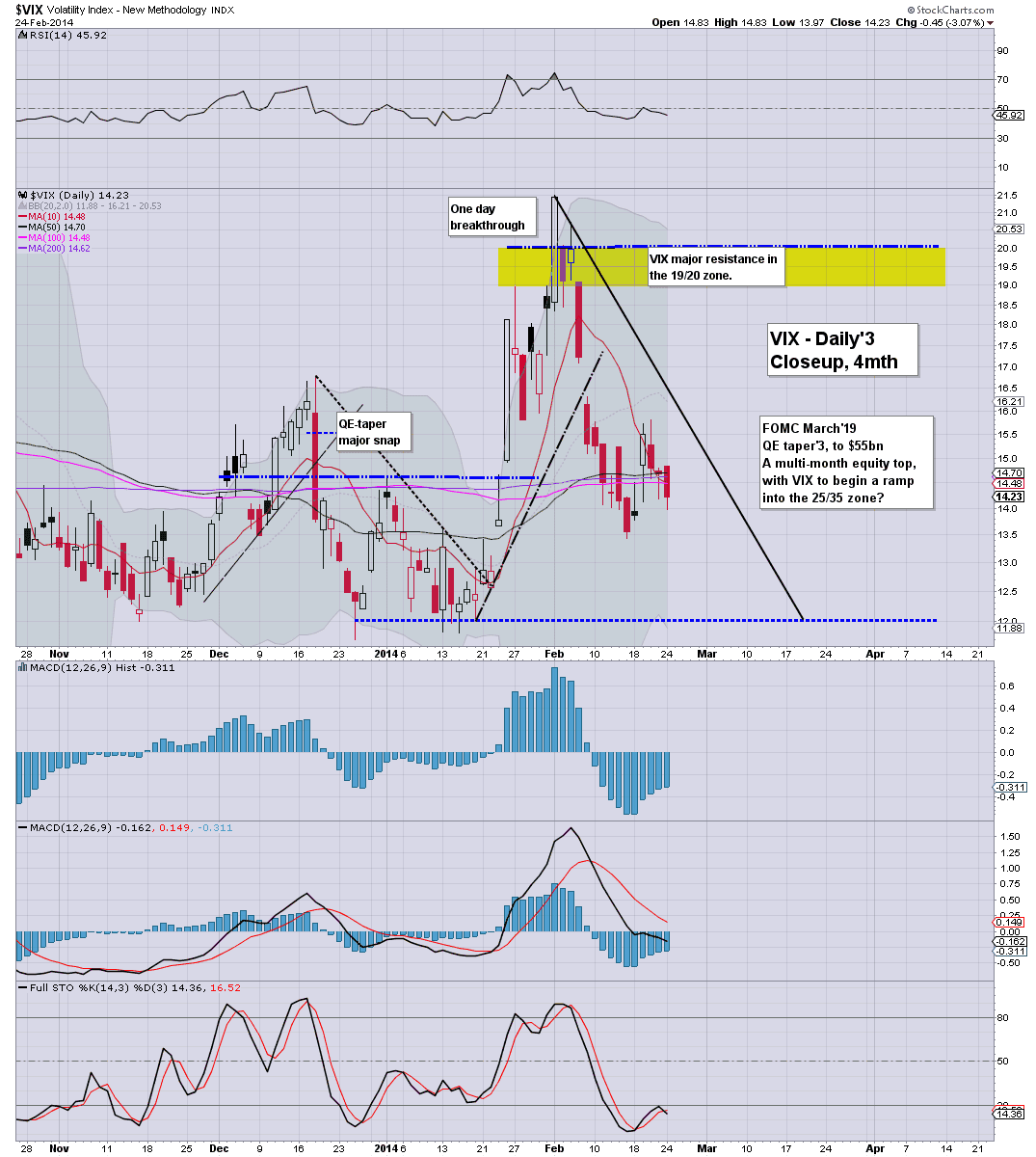 There really isn't anything much to add.

So long as equities continue to broadly climb, the VIX will remain in the low teens. The big 20 threshold doesn't look likely until April.
-- 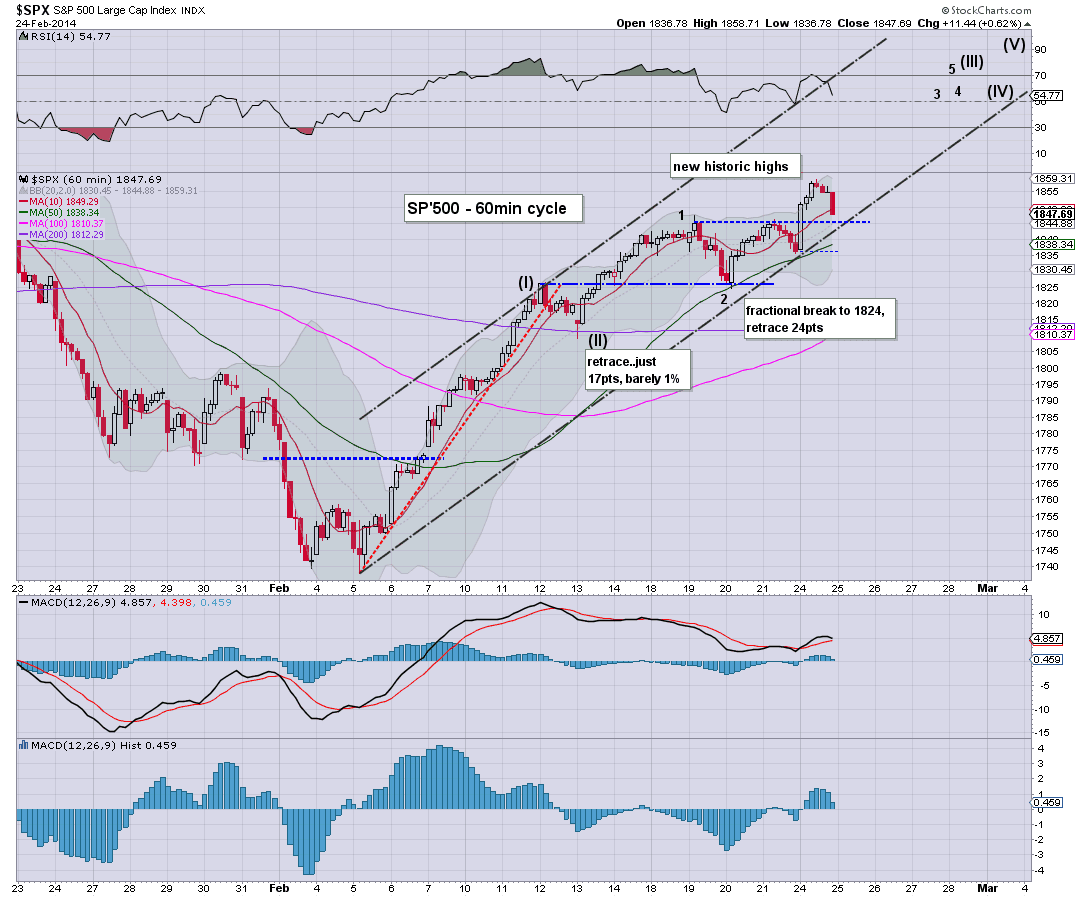 I certainly do NOT think the daily close under 1850 is an issue. After all, we did not close net lower on the day. How could the bears claim anything from today's action?
--

Despite the gains, a relatively quiet day in market land, and I'll leave it at that.

the usual bits and pieces to wrap up the day, across the evening...
Posted by Permabear Doomster at 21:03:00
Email ThisBlogThis!Share to TwitterShare to FacebookShare to Pinterest

The sp'500 looks set for a historic close in the 1850s. The two leaders - Trans/R2K, are similarly higher, and will probably be breaking new highs in the near term. Metals continue to hold sig' gains of around 1%. VIX is merely melting lower in the 14.25/13.75 zone. 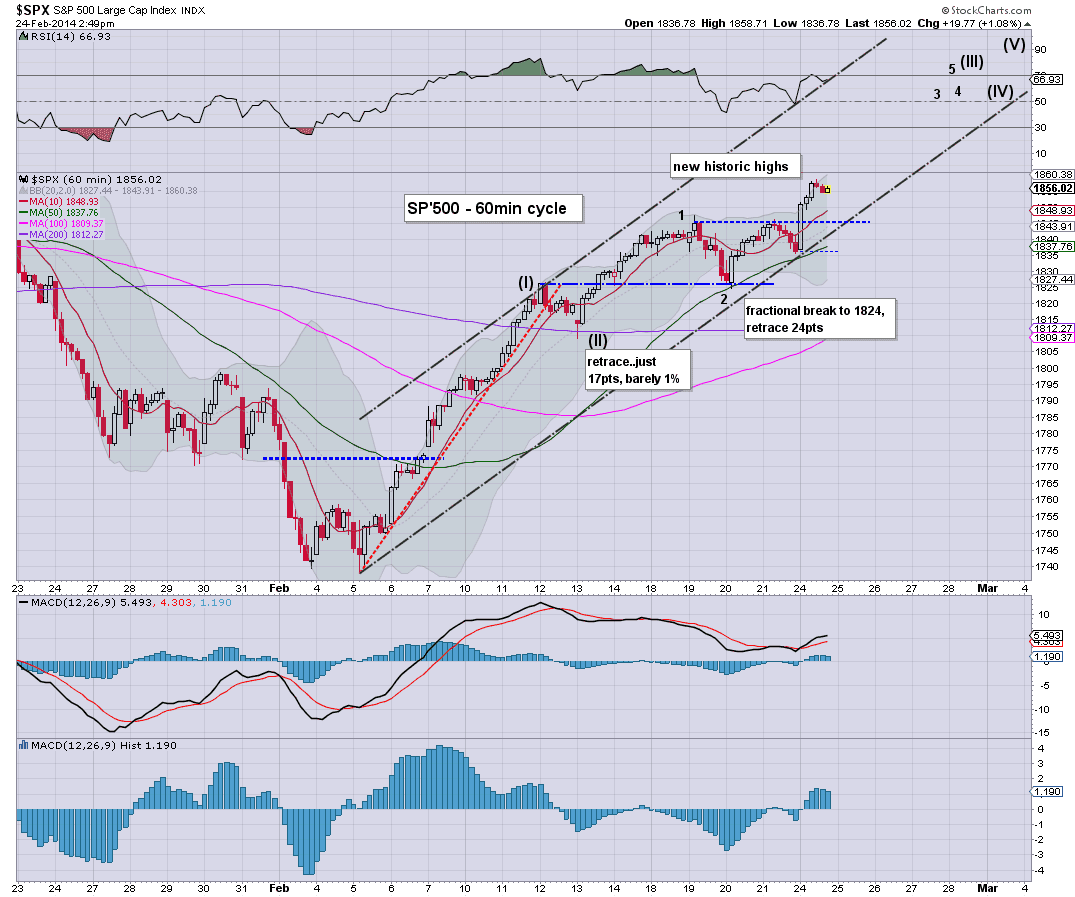 *the hourly charts are offering a baby bull flag, with upside into the 1865/70 zone by Wednesday.
--

Just another day for the bull maniacs. Tomorrow will likely be much the same.

Absolutely no reason why any bear should be getting even marginally excited about the last few hours. VIX is telling the story...a fearless market.
-

3.45pm...you can see how 1850 is again a key level. Regardless of the exact close..we didn't close lower, did we?   back at the close.
Posted by Permabear Doomster at 19:50:00
Email ThisBlogThis!Share to TwitterShare to FacebookShare to Pinterest

Mr Market is comfortably holding the bulk of the gains, with a daily historic close likely in the sp'1850s. With further sig' QE tomorrow, and Thursday, equity bears haven't a hope. Metals holding gains, Gold +$14. VIX is merely melting lower, having now slipped into the upper 13s. 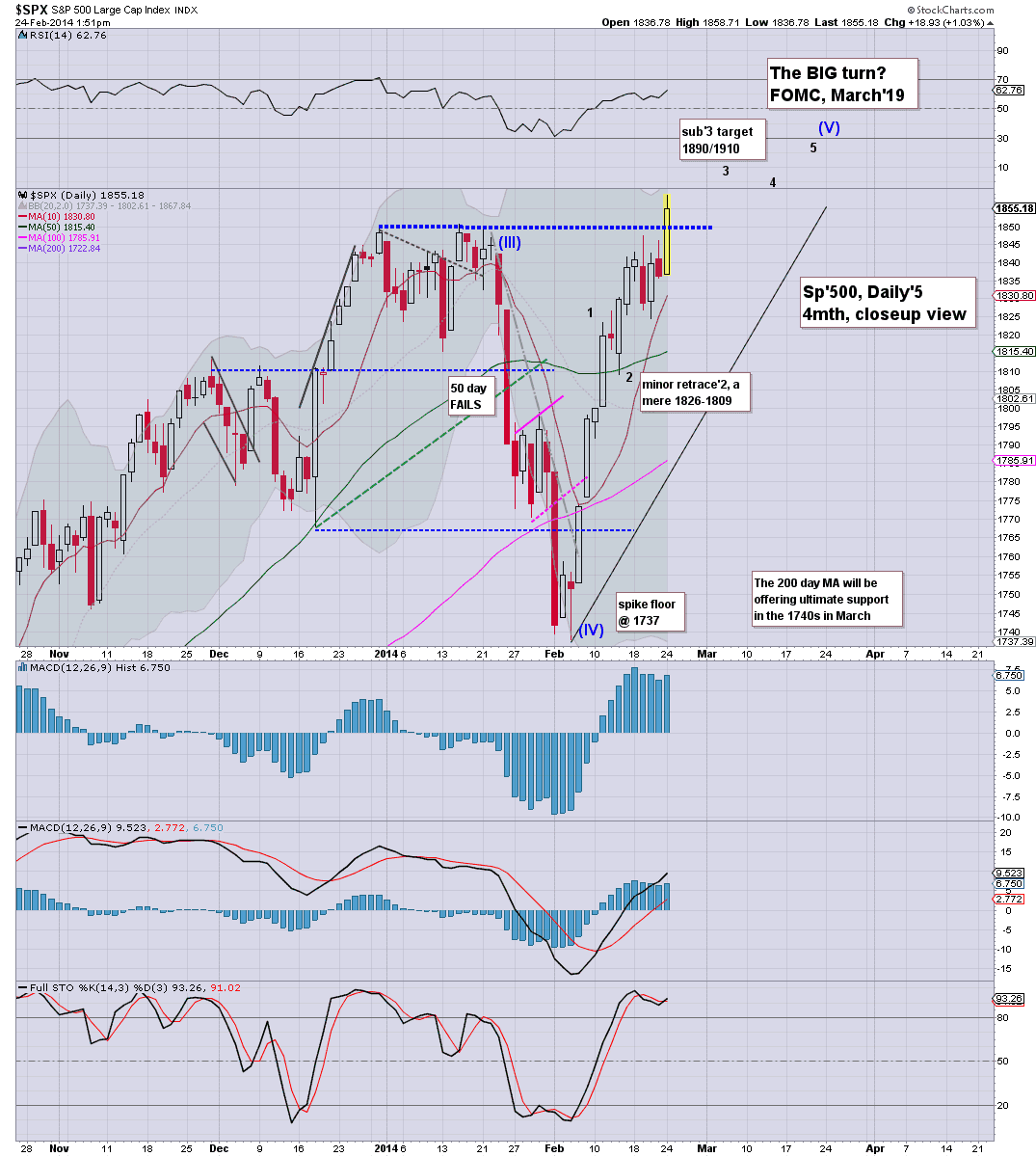 The style of price action has been telling the story for the past few weeks. There continues to be an inexorable push to the upside, helped by significant (if somewhat less) doses of QE fuel.

With each QE taper..the pressure increases on the bull maniacs. Even this market is going to be subject to a correction at some point. 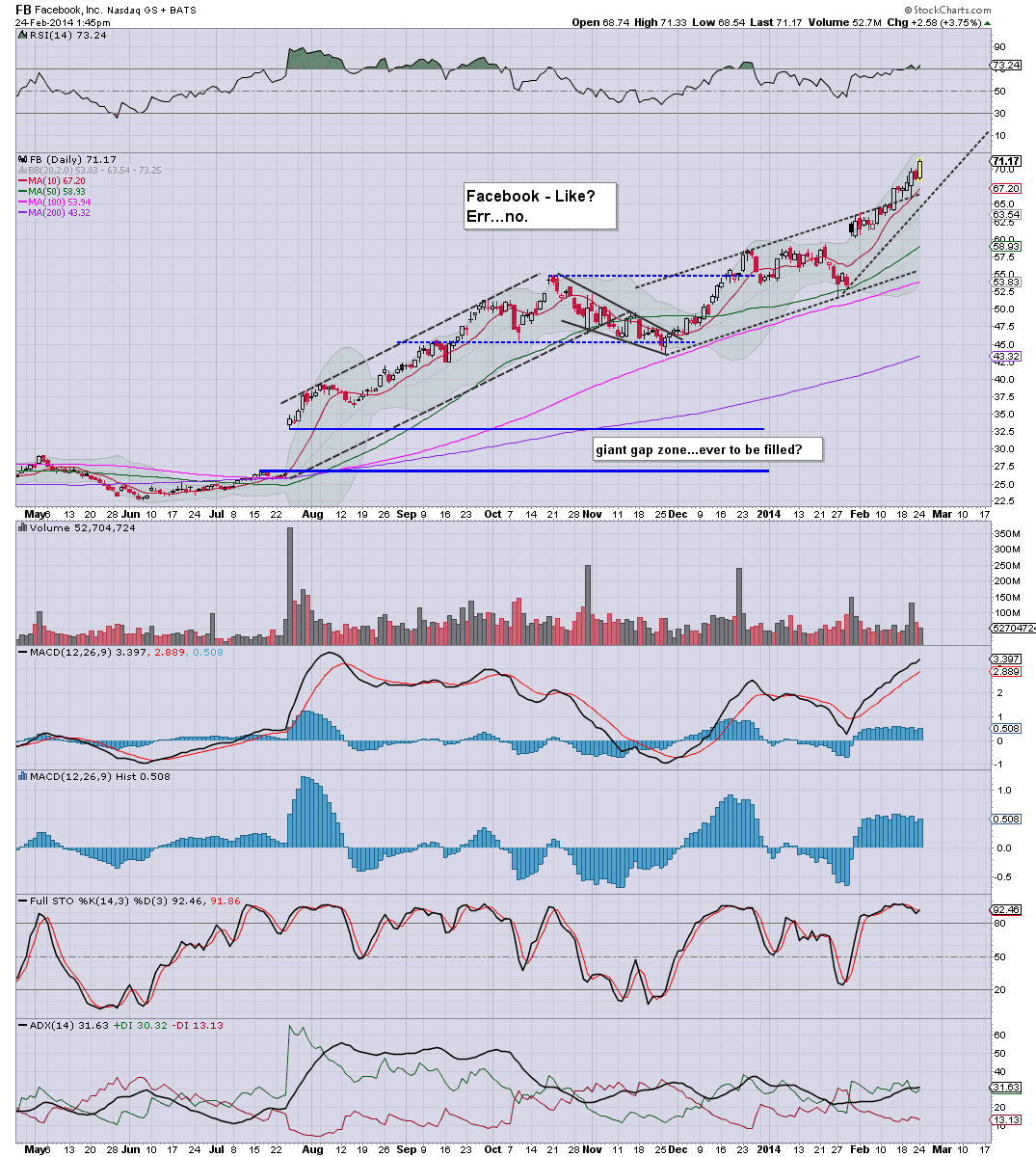 Anyone still doubt that nonsense hysteria stock won't be in the 100s next year?
Posted by Permabear Doomster at 18:52:00
Email ThisBlogThis!Share to TwitterShare to FacebookShare to Pinterest

1pm update - something big on the horizon

US indexes continue to hold significant gains, with the sp'500 set to battle into the 1860s this afternoon..or tomorrow. The two leaders - Trans/R2K, are similarly due to break new historic highs in the days ahead. Metals holding gains, Gold +$12 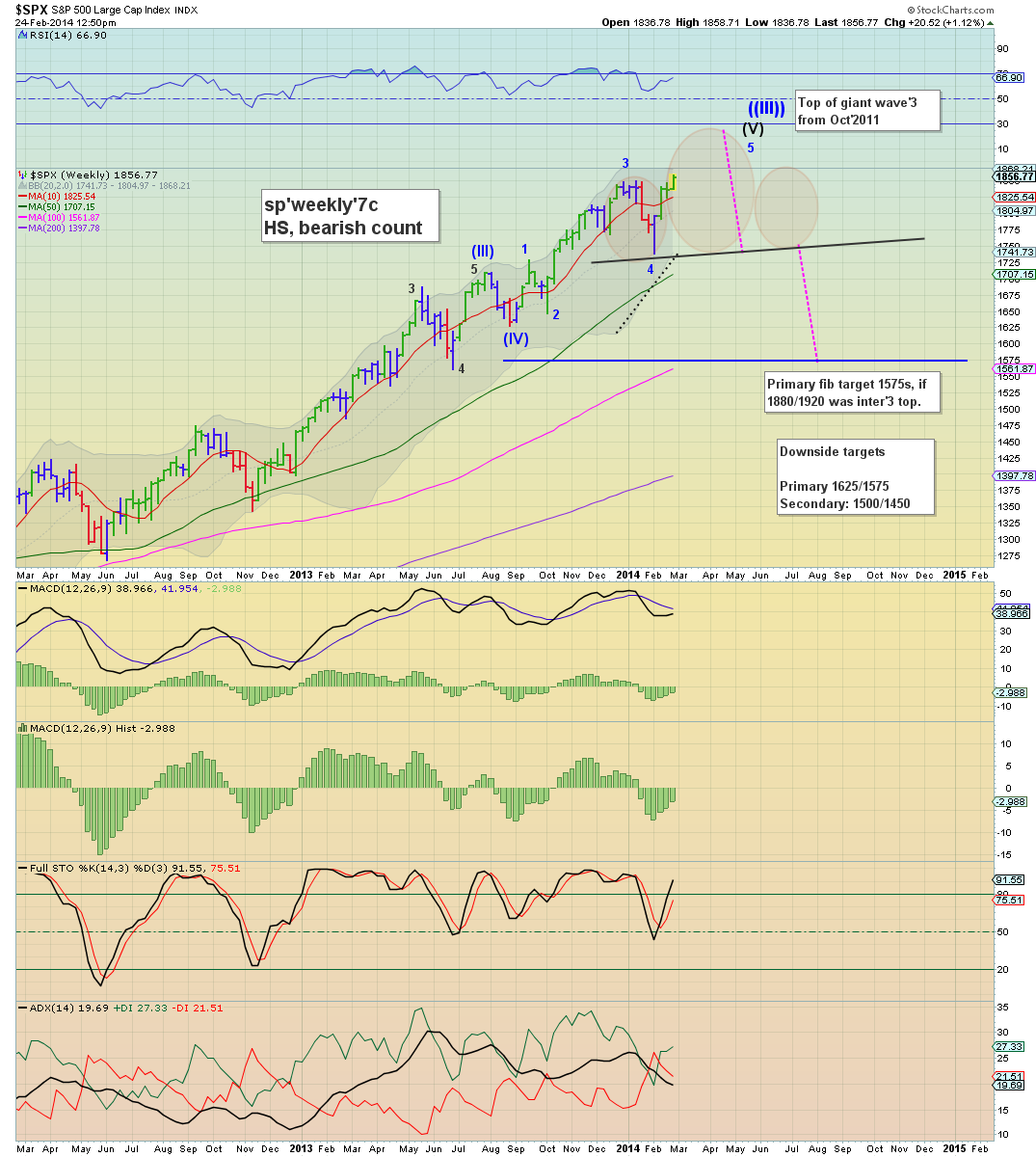 The above chart is unquestionably the most bearish outlook I dare throw out there.

Unlike 2013, we do have a difference this time..with QE being tapered. So long as the Fed don't 'taper the taper' at the next FOMC of March'19th, I think the above scenario has a chance. However, even if the market maxes out, and rolls over in late March, we won't have any initial indication of this bigger bearish scenario until late April at the very earliest.

Anyway, its just an idea..and as ever..one day at a time.

Ghostbuster 'Egon'..aka.. Harold Ramis has died.  see: Chicago Tribune. Not so much my favourite actor, but he certainly was a massive creative influence for many of my favourite movies.

No doubt the 'dogs and cats living together...mass hysteria' moment will also be highlighted by many today.

Arguably...VIX March strike...no good...not enough time. As it is, I do not intend to trade the VIX in the first wave lower in April.

more on that later though...
Posted by Permabear Doomster at 17:52:00
Email ThisBlogThis!Share to TwitterShare to FacebookShare to Pinterest

12pm update - the pomo can only be helping

US equities continue to build gains, with the sp' decisively in new territory, and there is no doubt today's QE-pomo of $2-3bn is helping give an extra kick. Metals are similarly higher, with Gold +$14.  VIX is merely melting lower, with a daily close likely in the 13s. 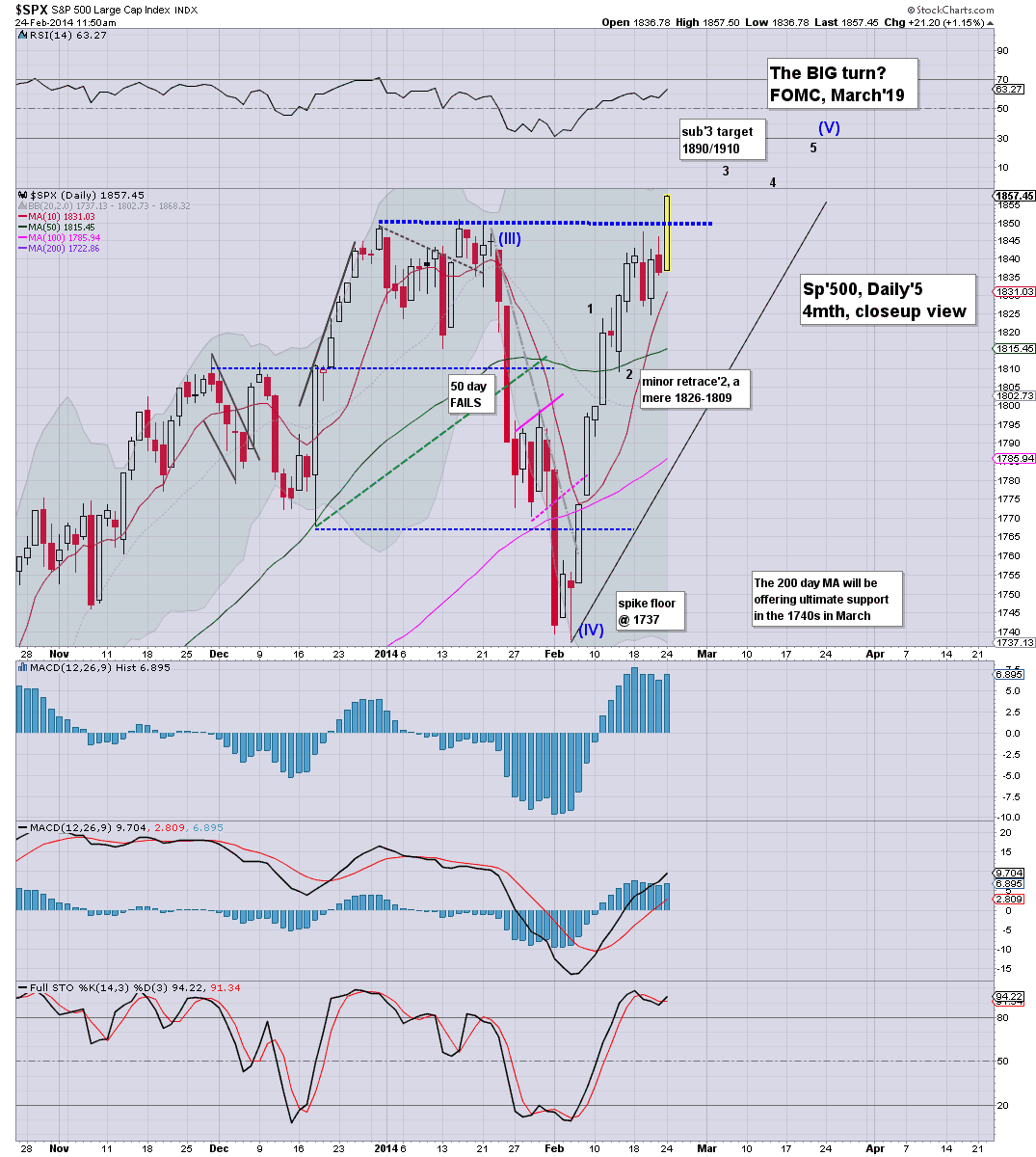 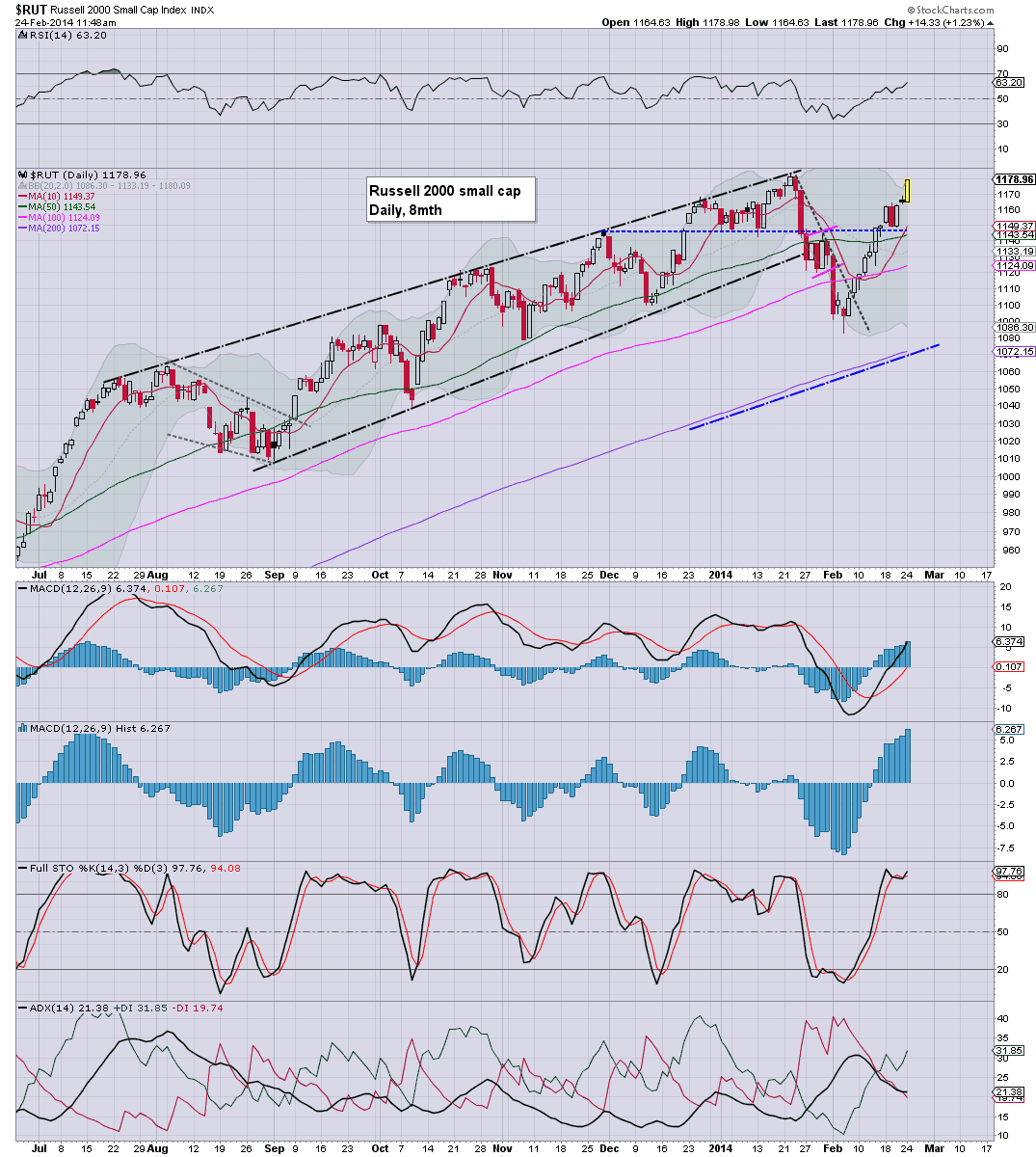 *I highlight the R2K, since its also about to break new historic highs. Trans, will surely follow later this week.
---

What else to say?

Well, we're simply on track. A key high around the next FOMC remains the target.
--

UGAZ -13%...which is a severe swing from earlier 7% gains.
Posted by Permabear Doomster at 16:51:00
Email ThisBlogThis!Share to TwitterShare to FacebookShare to Pinterest

The opening minor gains have quickly built into somewhat significant gains, with the sp'500 decisively breaking into new historic territory. Further upside is expected, with a target zone of 1880/1920 around the next FOMC of March'19. Metals are also building gains, Gold +$13 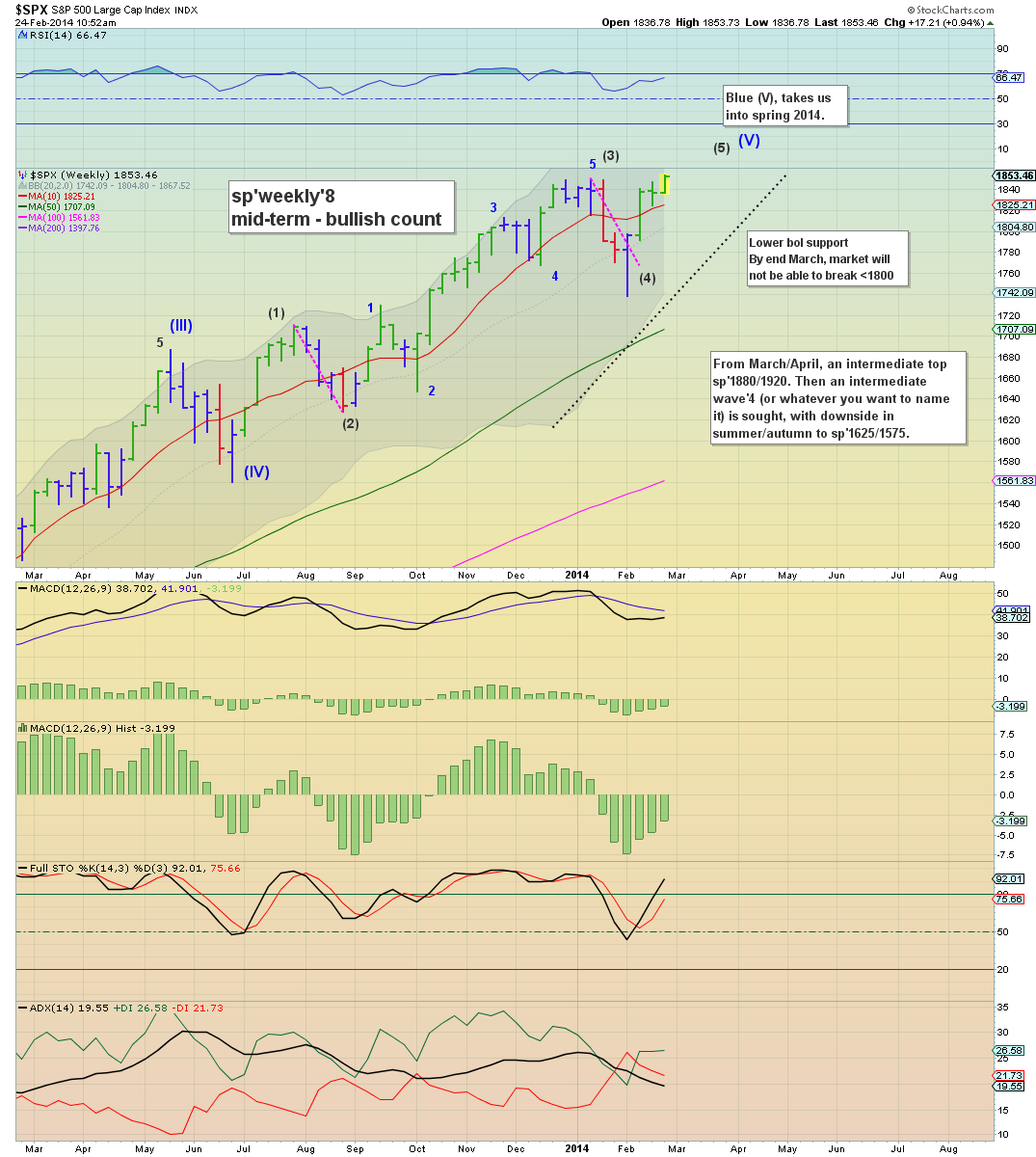 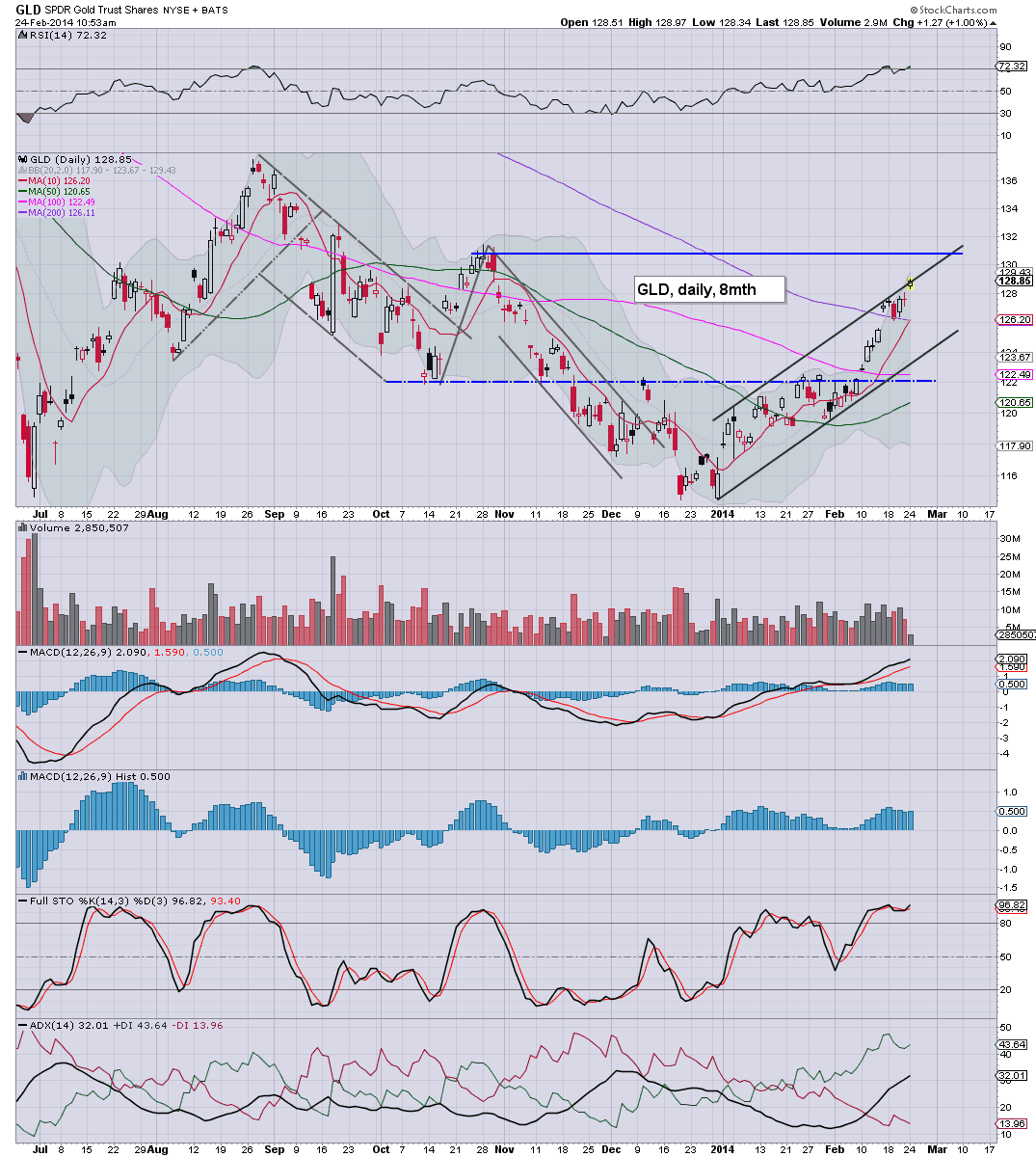 *I have little interest in the minor cycles today. I might stick with the bigger charts for rest of the day.
--

The break above 1850 is decisive, there is no question about the break.

Even Cashin on clown finance TV just now was talking about 'wanting to see 1852'...which would secure upside for rest of the week...and I agree with that.

Upside into end month..and March is usually a strong month too.
--

Transports +1.0%..almost in the 7400s...a good sign for the equity bulls. Maybe a weekly close in the 7500s.
Posted by Permabear Doomster at 15:53:00
Email ThisBlogThis!Share to TwitterShare to FacebookShare to Pinterest

10am update - making a play for new highs

US indexes open moderately higher, and we're on the edge of breaking new historic territory for the sp'500. Metals are continuing to climb, Gold +$8. VIX is -3%, and seemingly about to lose the 14s. 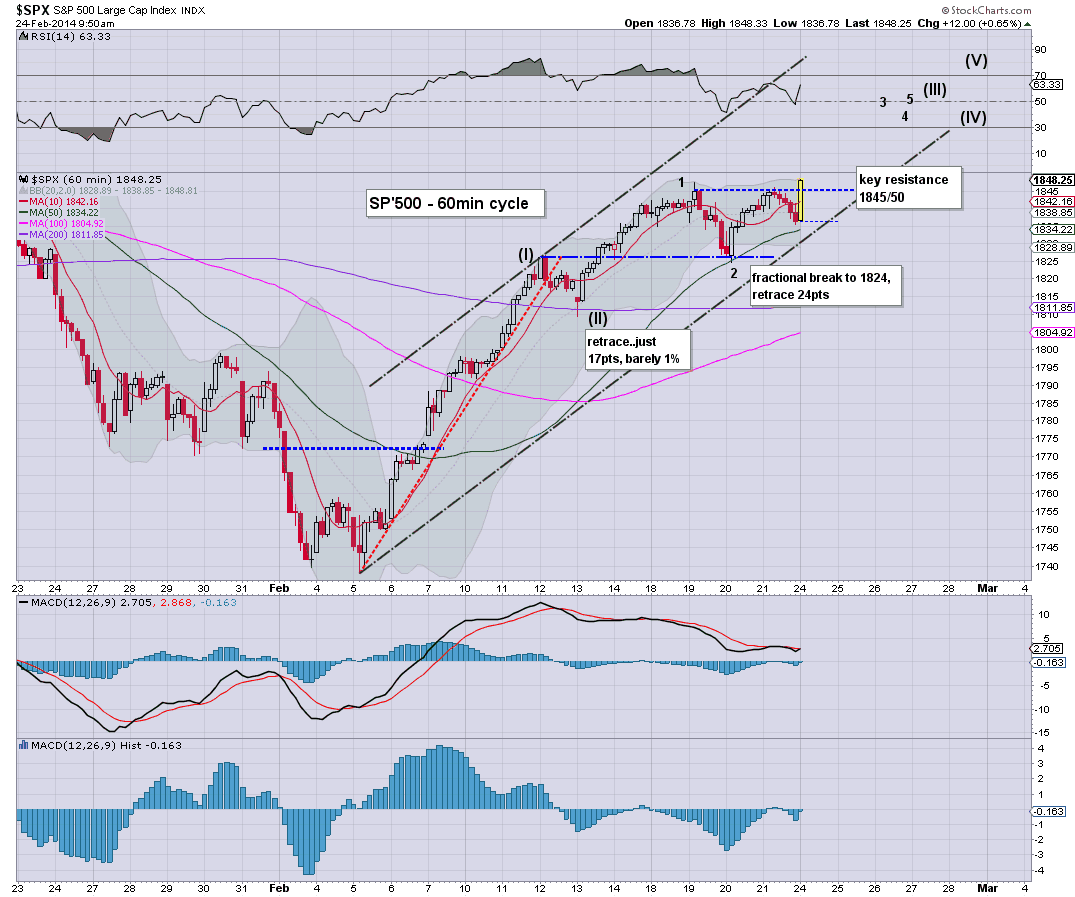 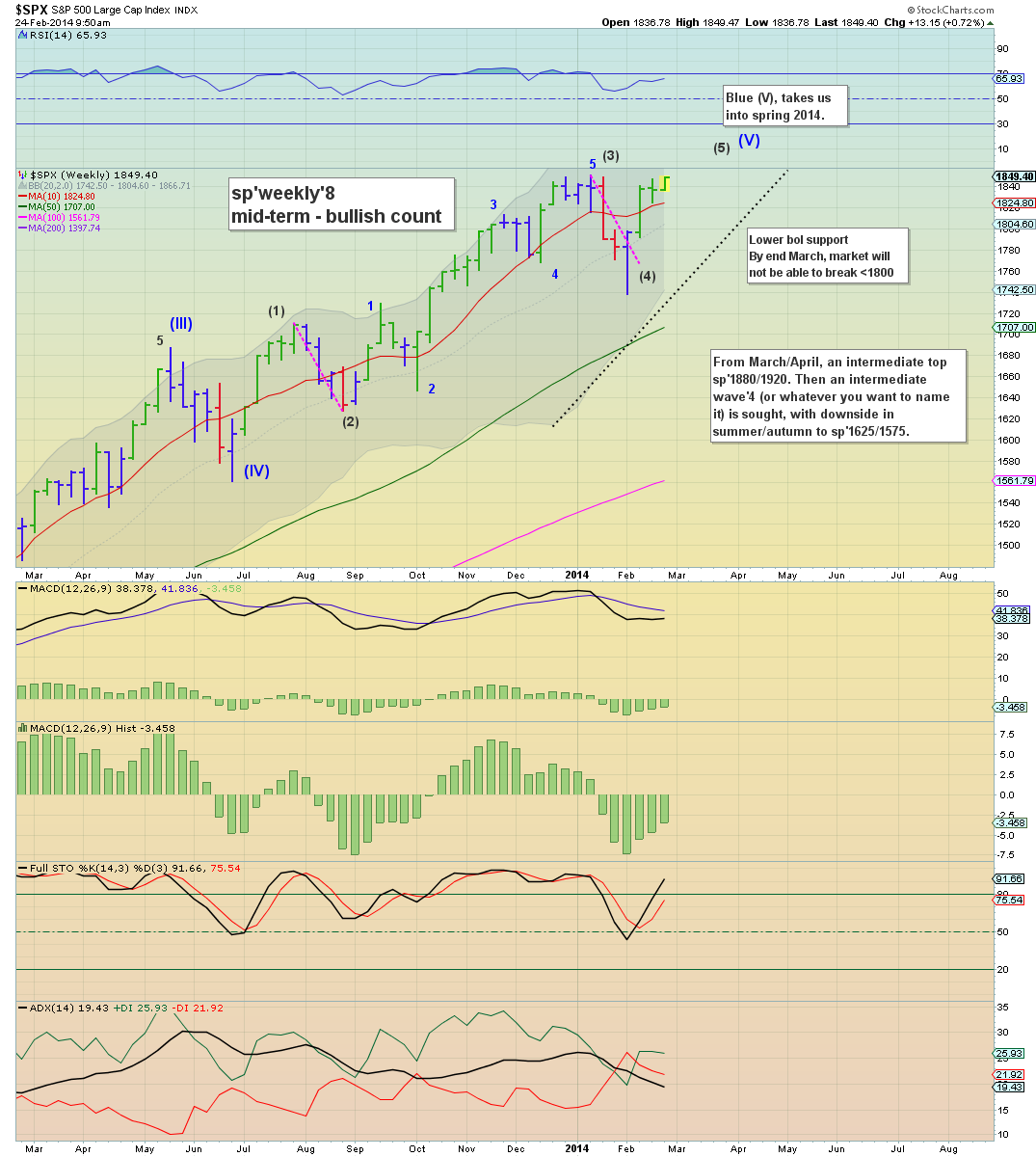 Simply put, there just doesn't seem to be ANY downside power right now.

So..new highs..and chart weekly'8 is STILL on track.  Another few green candles..and then the big turn.

10.10am.. big swing in UGAZ, from +7% in pre-market to -8% right now. Hmm
Posted by Permabear Doomster at 14:51:00
Email ThisBlogThis!Share to TwitterShare to FacebookShare to Pinterest 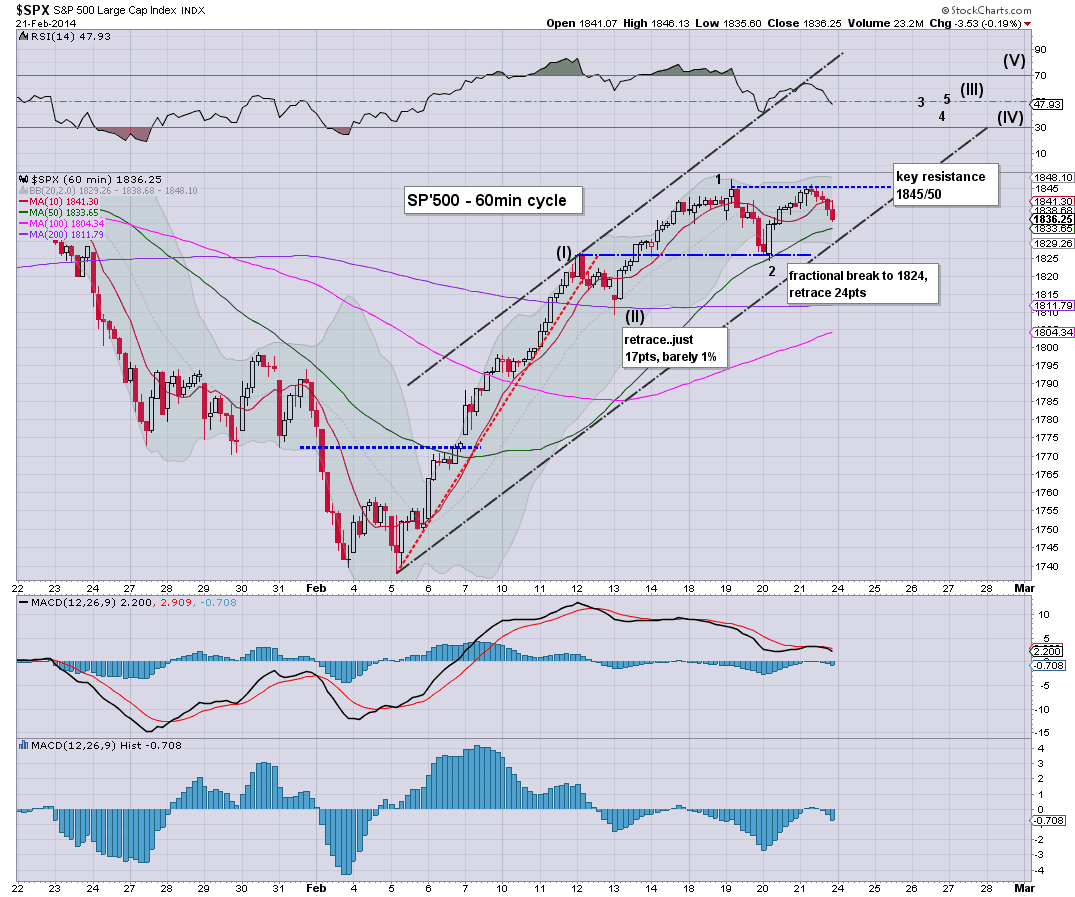 Just about everything is setup in the equity bulls favour this week.

Equity bulls should merely seek a weekly close >1850. That will suffice for end February, and set up new highs across March.
-

*something to watch at the open, weekly charts, lower bollinger, should jump into the 1740s, and thus conclusively ruling out a break of the recent 1737 low for some weeks, if not a few months. Indeed, by end March, we'll have a primary support floor around the 1800 level.

Sure doesn't look to be any downside power.
Posted by Permabear Doomster at 13:19:00
Email ThisBlogThis!Share to TwitterShare to FacebookShare to Pinterest
Newer Posts Older Posts Home
Subscribe to: Posts (Atom)