With equity indexes seeing minor opex price chop to conclude the week, the VIX - as is often the case, was knocked lower in the closing minutes of the week, to settle -0.3% @ 12.49. Across the week, the VIX gained 2.9%. VIX 20s look unlikely until the late spring. 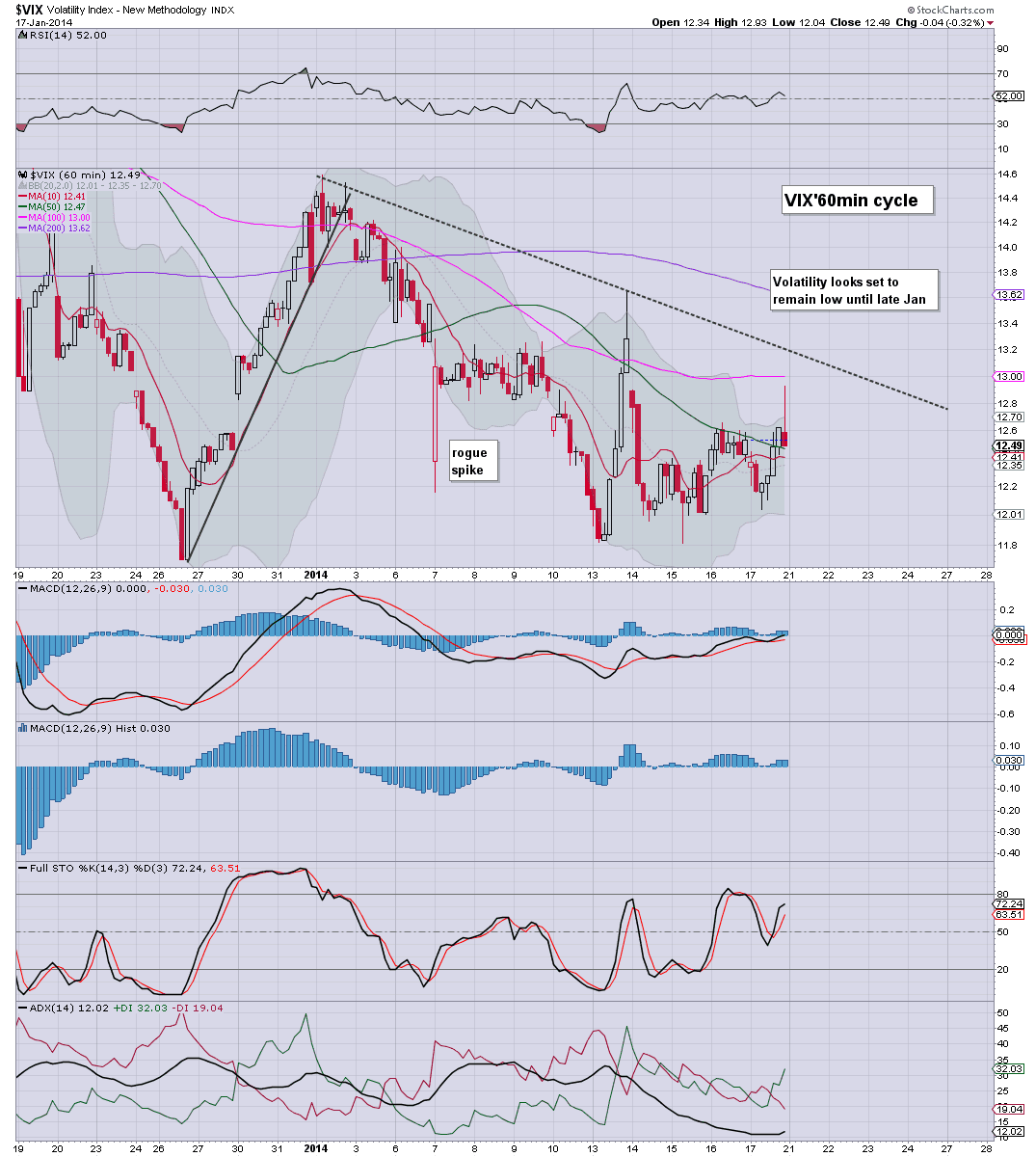 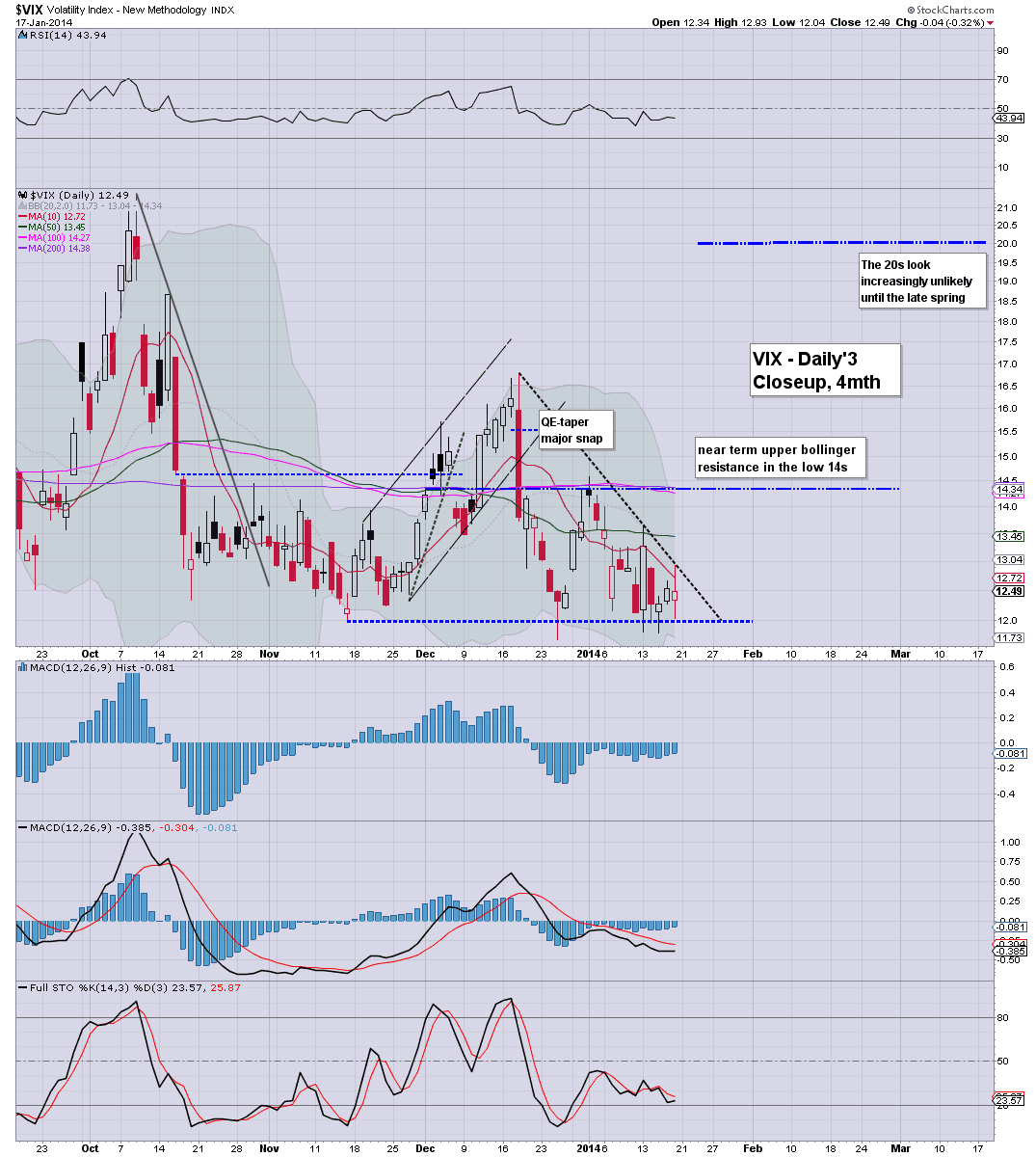 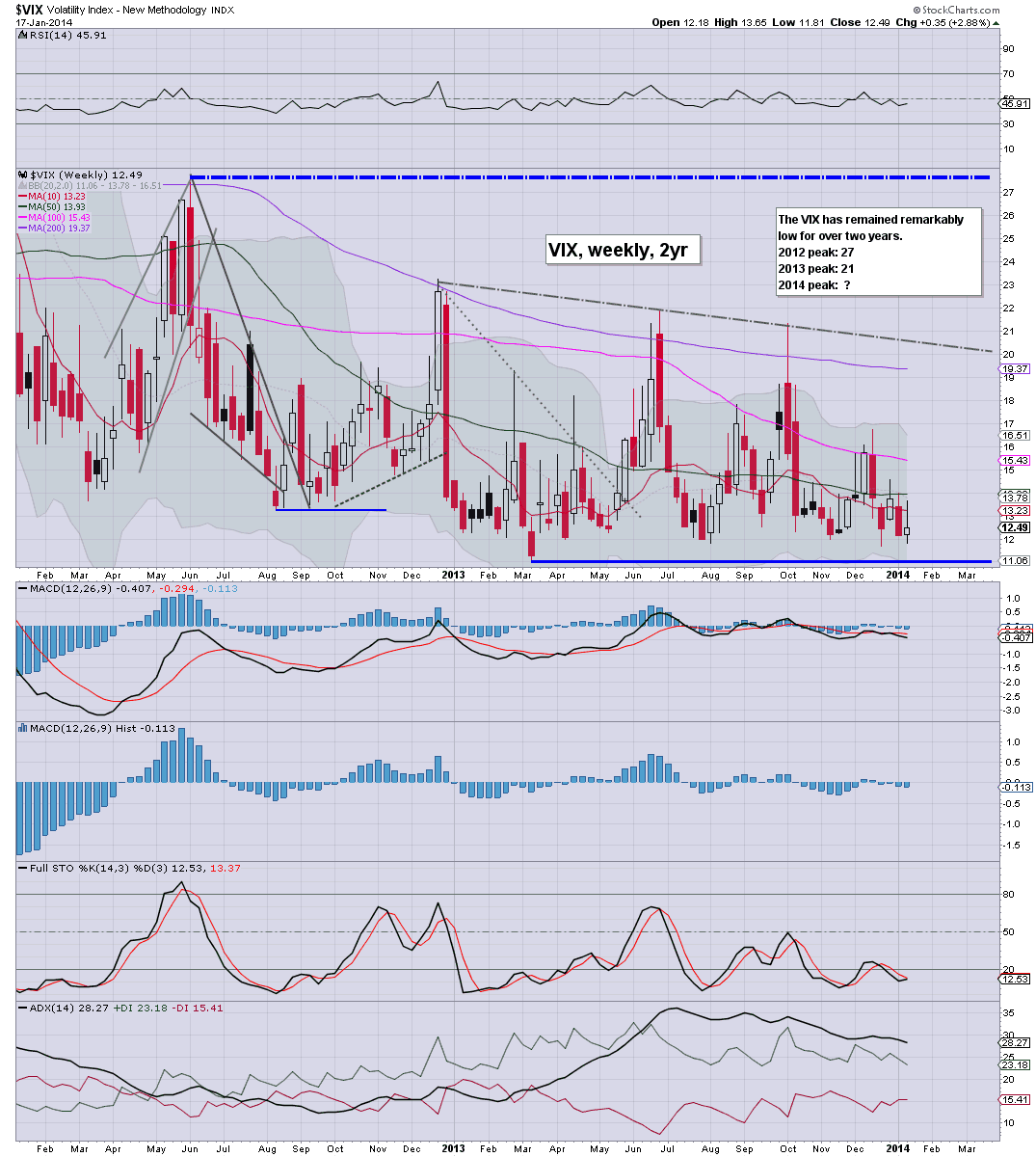 *a typical 'whack the VIX lower into the weekly close' event.
--

There is little to add on the VIX, which remains stuck in a very tight range of 14/11. Even the 15s look out of range for some weeks. Baring some spurious news event, the 20s do not likely for a few months.

I will note, if we do see a sig' equity correction this summer/autumn, I would be seeking a VIX in the 35/45 zone..although the 40s..sure do look...difficult.
--
more later..on the indexes
Posted by Permabear Doomster at 23:00:00
Email ThisBlogThis!Share to TwitterShare to FacebookShare to Pinterest 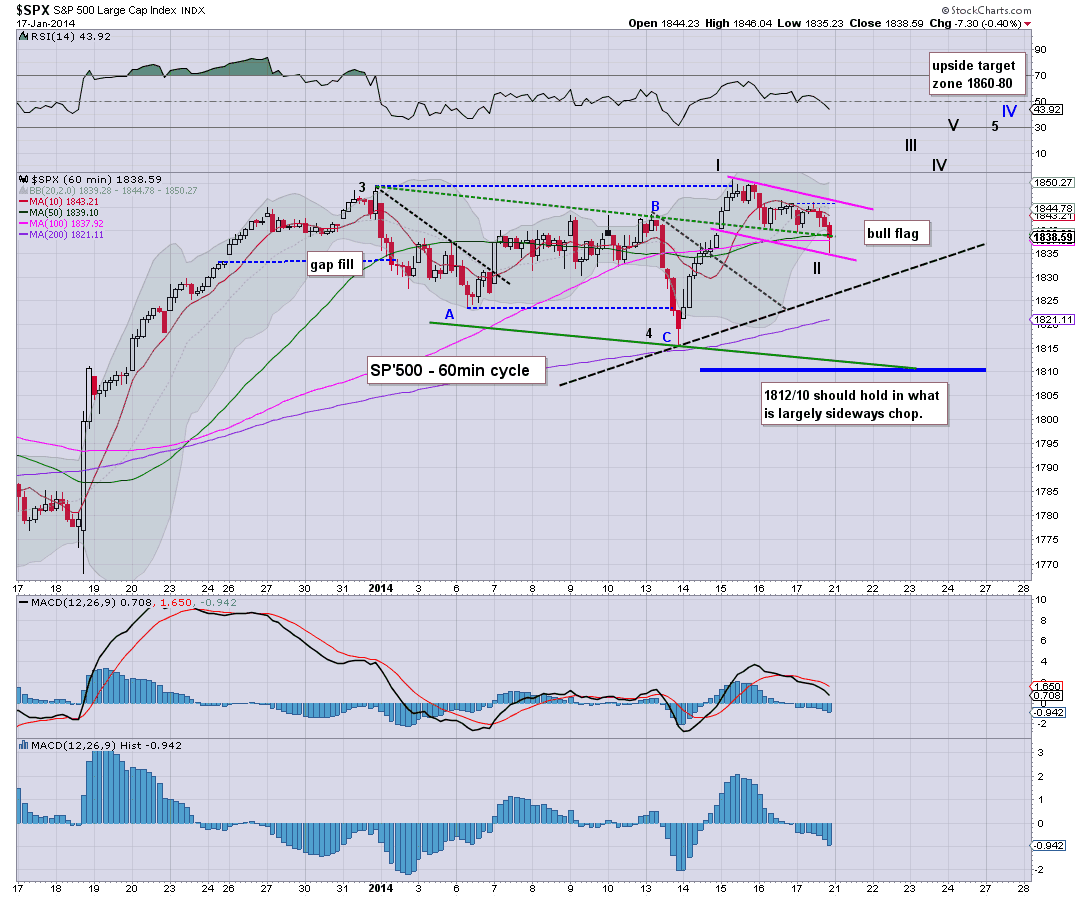 Each point higher..each little rally..seems more annoying, and ever more painful that the previous one. Hell, I've not even shorted this market since last summer, and it still bugs me.

The US equity market is CLOSED next Monday, so we have an extra day to focus on less stupid aspects of our lives.

Have a good weekend....if you can.

--
the usual bits and pieces to wrap up the week..across the evening.

*the weekend post - late Saturday, will be on the US weekly indexes
Posted by Permabear Doomster at 21:02:00
Email ThisBlogThis!Share to TwitterShare to FacebookShare to Pinterest

The equity market remains in chop mode, which in many ways, has been the case for the past 3 trading weeks. We look set to close somewhere in the sp'1845/40 zone, with VIX in the 12s. Metals are holding gains, with Gold +$10..set for a fourth consecutive weekly gain. 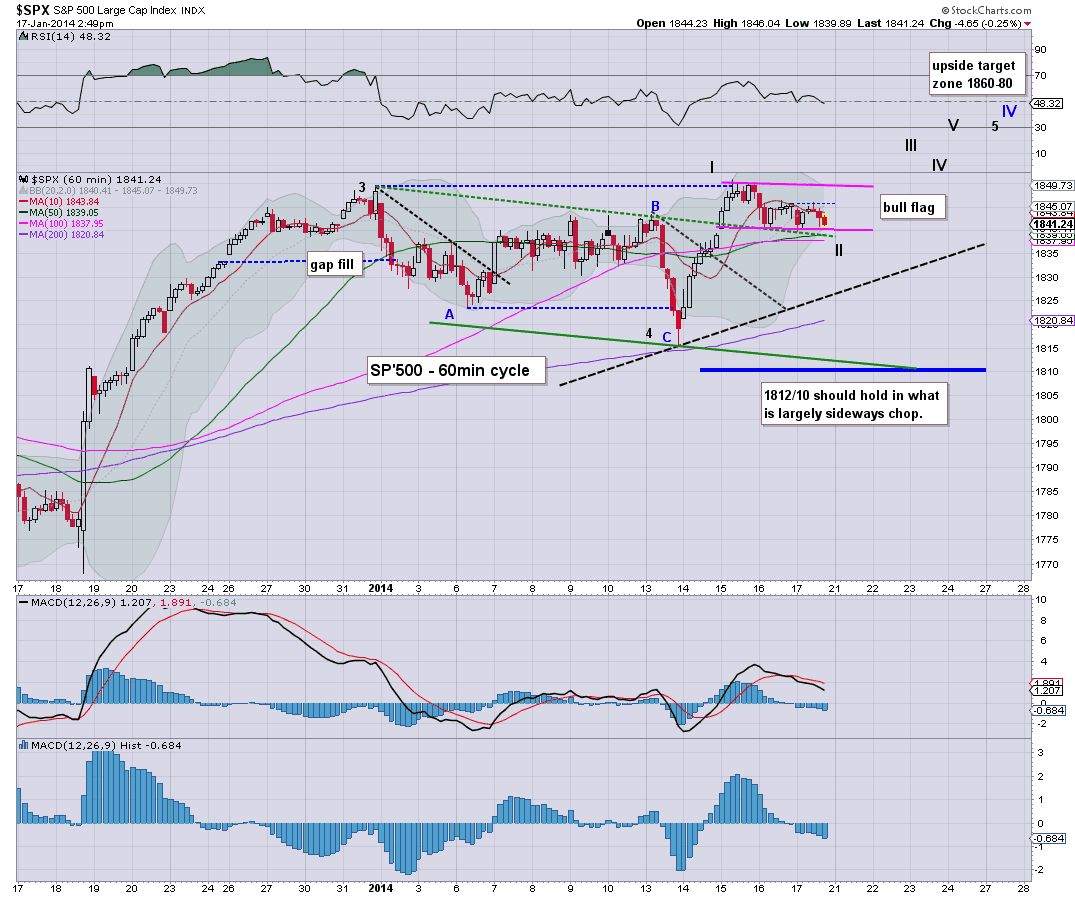 The little down wave of Monday, where we saw significant index declines of around -1.4%..now seems a long time past.

All those who were touting a break into the mid 1700s have indeed largely given up on that hope. Just reflect how clown finance TV were on Monday afternoon. There were endless analysts appearing, mostly all agree 'oh yeah..here comes the 5-10% correction we've been seeking'.

No. There is simply no downside pressure right now.

Even Mr Permabull, Carboni in his most recent video, correctly highlighted the hugely important issue of capital inflows to the USA. Just where else - other than equities, is all this money going to end up?

When you come to realise..and accept that capital flow issue, another 10% higher in the main market doesn't look too bold a target at all.

For now, I will merely note.. it is somewhat curious to see they too are looking for a summer/autumn major correction..before the nonsense resumes to the upside.

Regardless, its all minor noise..and the hourly MACD cycle is arguably reset for another major move higher next week.


3.40pm.. so much for the 1837 low.  Anyway..its alll minor noise..back at the close..to wrap up the week.
Posted by Permabear Doomster at 19:50:00
Email ThisBlogThis!Share to TwitterShare to FacebookShare to Pinterest

The main indexes remain moderately mixed, with most lower by around -0.2%. The standout remains the Dow, +0.3% VIX has turned fractionally positive, but in the grand picture, all such moves are mere noise. Metals holding gains, Gold +$11. 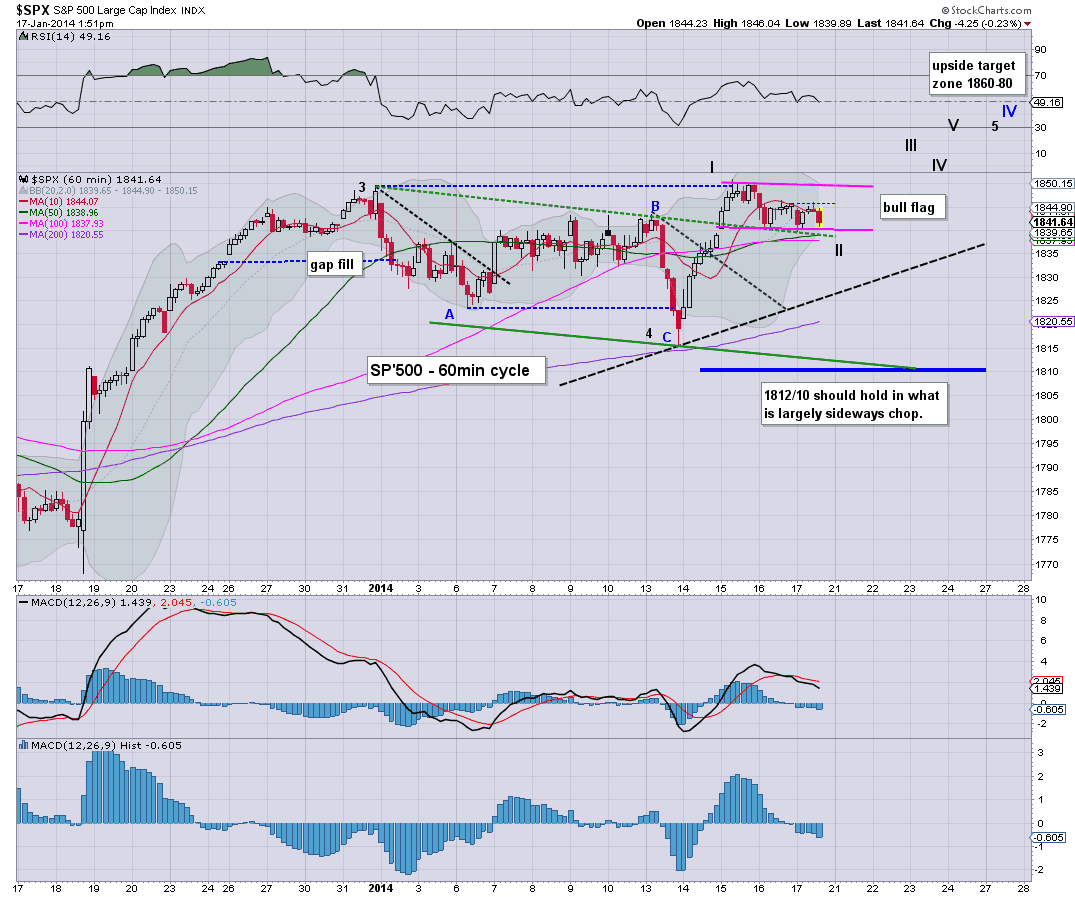 *labelling the micro waves is fraught with endless problems, if you counf the past few days of chop as a small'2, then next week should (in theory) see a break higher to the 1860/70s.
--

Well, just 2 hours until the 3 day weekend...this is very much a typical choppy opex.

I see a fair few people out there already ruling out the sp'1900s ....really? Haven't we learnt anything yet?  Unless I'm mistaken, QE continues at an annual rate of $900bn. 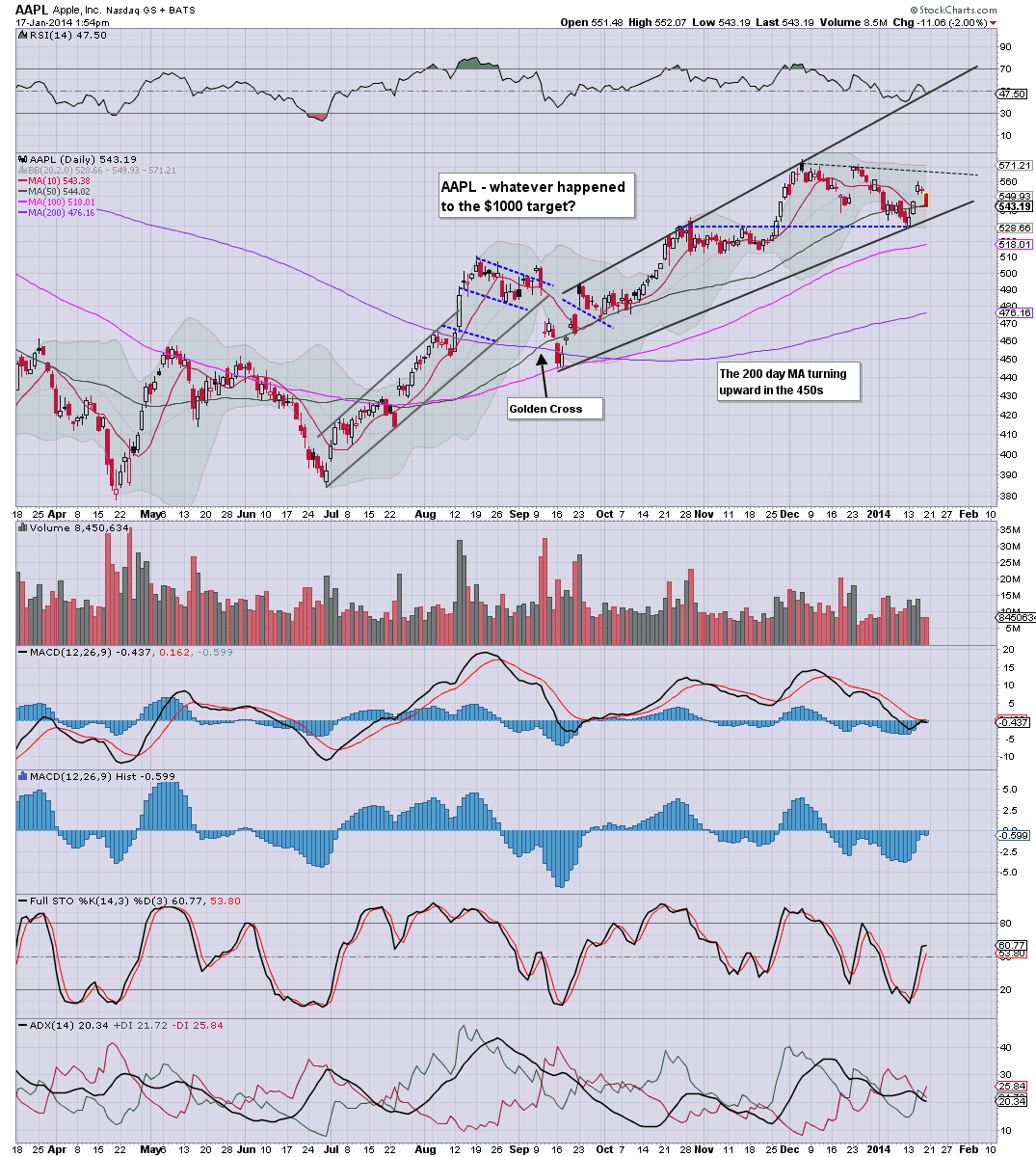 There should be support around 535, but with it being opex, market makers will probably try to pin it around 540 for today's close.
Posted by Permabear Doomster at 18:54:00
Email ThisBlogThis!Share to TwitterShare to FacebookShare to Pinterest 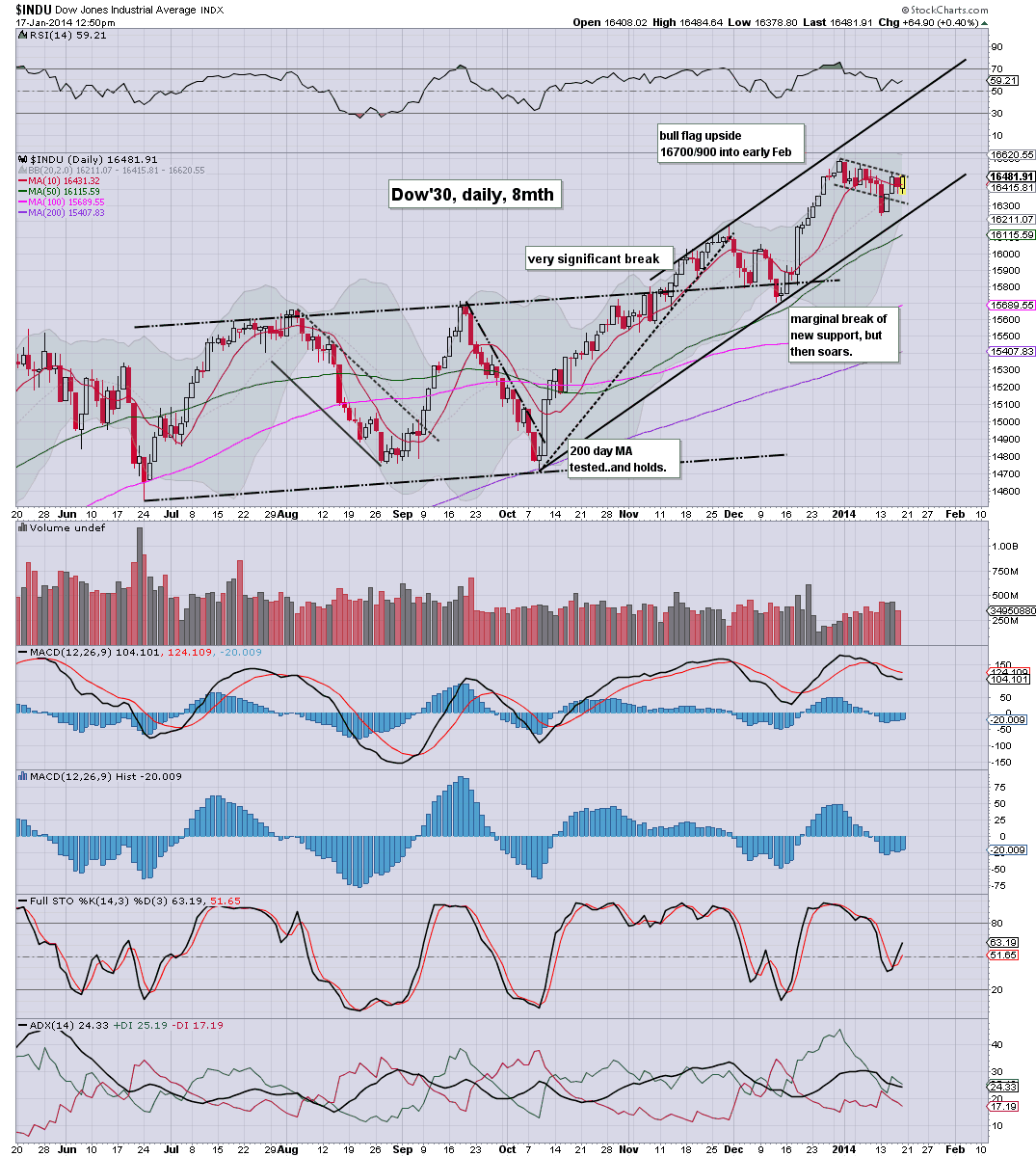 Again, I'm reminded of all the doomer chat we've seen this week, endless talk of 1929 and 'the top really is in this time'. Few seem to have learned anything..even after almost five years of broad equity gains.
-

Those going long VIX..that equally seems a stupid idea. VXX, TVIX, UVXY, will simply decay in the weeks and months ahead. Arguably, the only decent 'go long VIX' signal, is when it breaks 20, and does anyone seriously believe that is viable before the late spring?

Notable weakness : GE, -2.5%, and frankly, that is another bizarrely valued stock..at least relative to the main market.
Posted by Permabear Doomster at 17:56:00
Email ThisBlogThis!Share to TwitterShare to FacebookShare to Pinterest

12pm update - churn into the afternoon 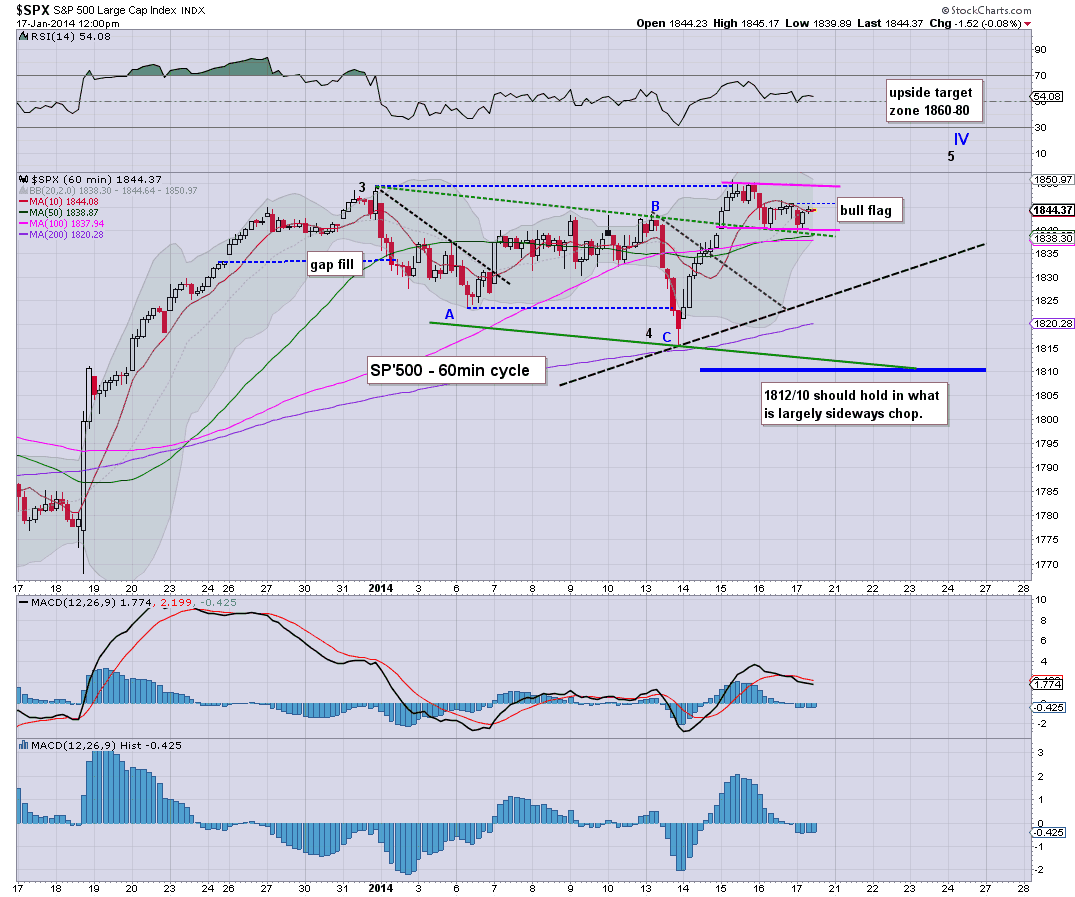 Not much to add, on what is a quiet end to another disappointing week for the equity bears.

I remain increasingly resigned that we won't be breaking <1800 until the early summer.
--

time for tea.
Posted by Permabear Doomster at 17:01:00
Email ThisBlogThis!Share to TwitterShare to FacebookShare to Pinterest

Some minor morning chop/weakness, and it looks like we have a reasonable floor at sp'1839. Metals are holding moderate gains, Gold +$7, and this is helping the miners, GDX +1.9%, but both remain broadly weak. VIX is seemingly likely to melt lower into the weekend. 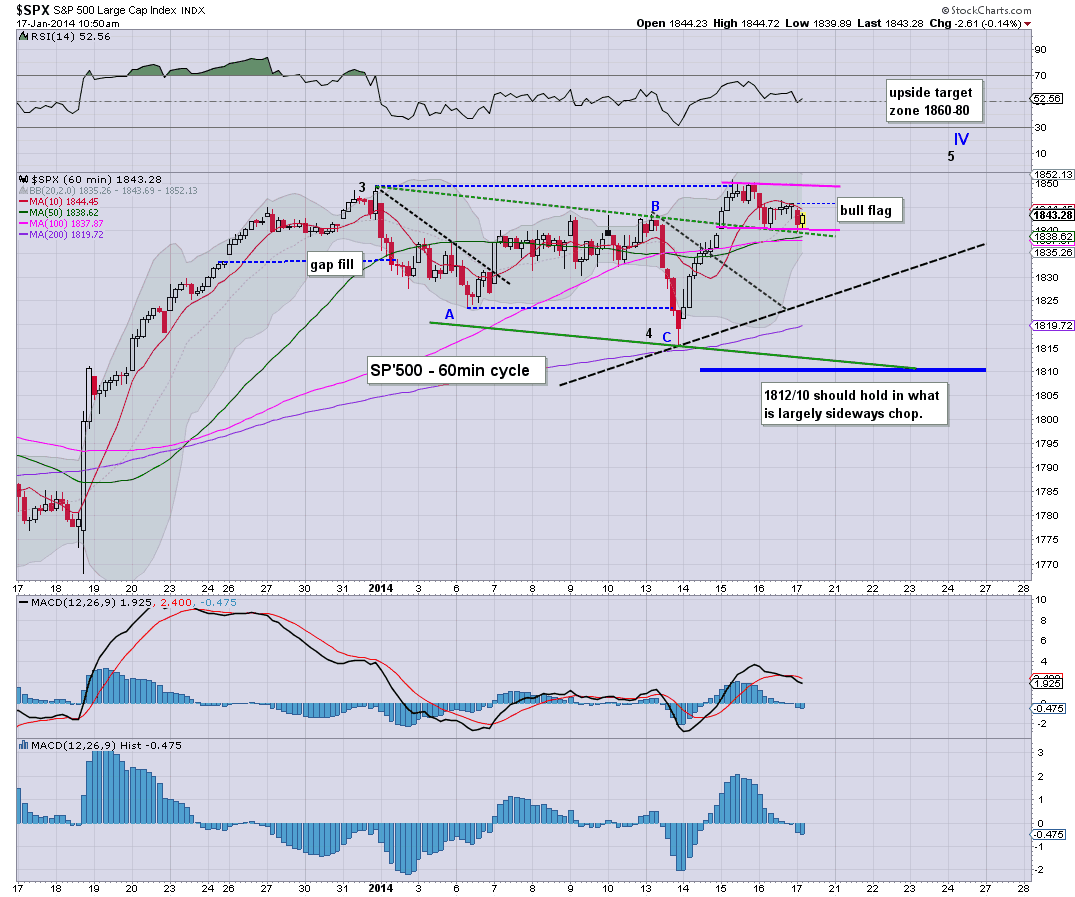 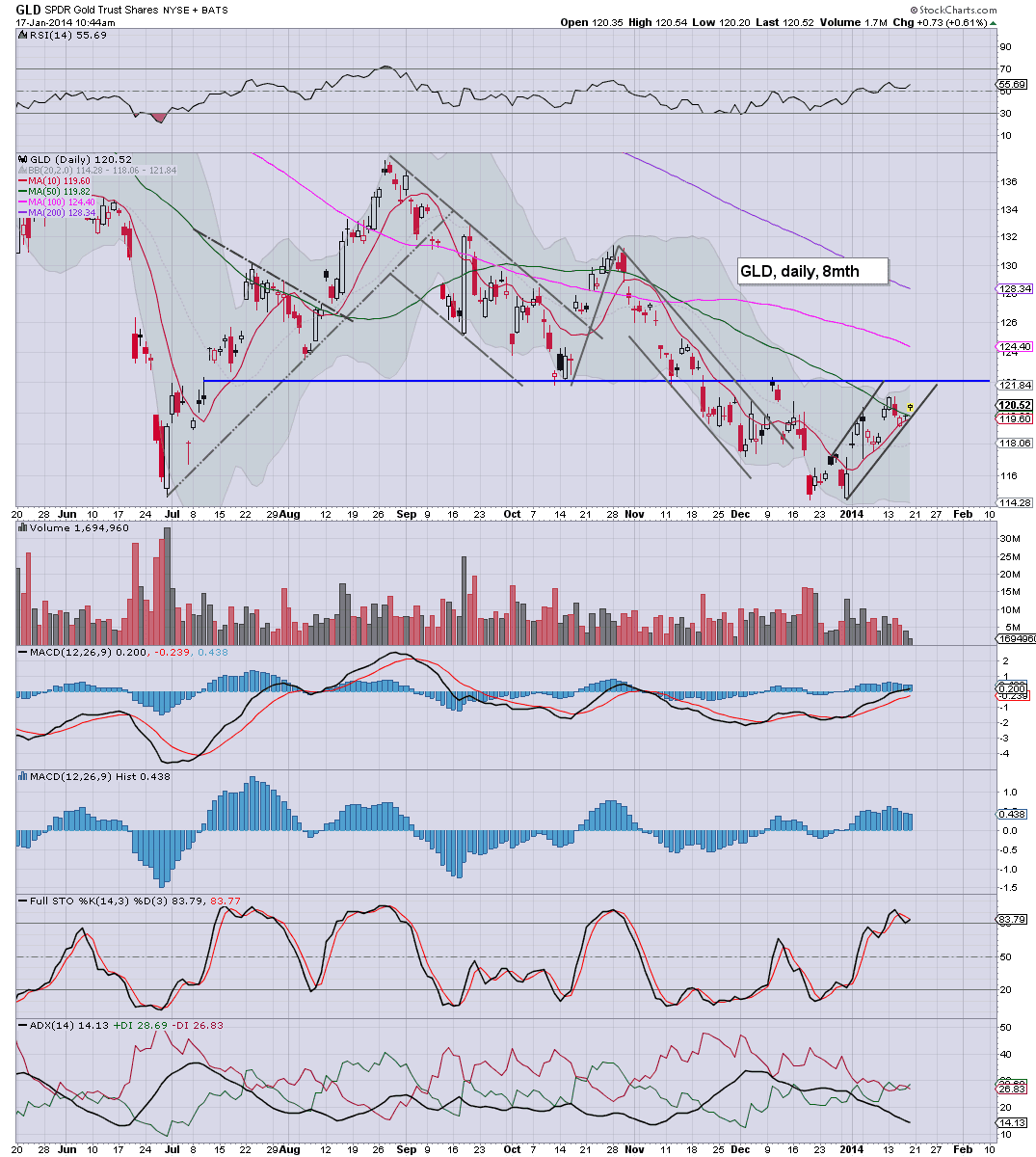 Econ-data came in a little weak, so..that was an excuse for the minor weakness.

With $2-3bn of QE today, there is little reason to expect any further downside today. VIX reflects a market that is fearless..knowing that the Yellen will soon be sitting in her command chair..eager to hit the PRINT button.
--

TWTR, +4%, I've no idea on next earnings...from what I know, another loss is due, which would explain why its not valued at 1 trillion $ yet.
Posted by Permabear Doomster at 15:53:00
Email ThisBlogThis!Share to TwitterShare to FacebookShare to Pinterest

10am update - churning in a bull flag

Market is just seeing some minor chop...within what is very likely a bull flag. Regardless of today's close, the broader up trend remains very much on track, with a target zone of sp'1860/80 by end month. Metals and Oil are both higher by 0.4%. VIX looks set for a weekly close in the 12.25/11.75 zone. 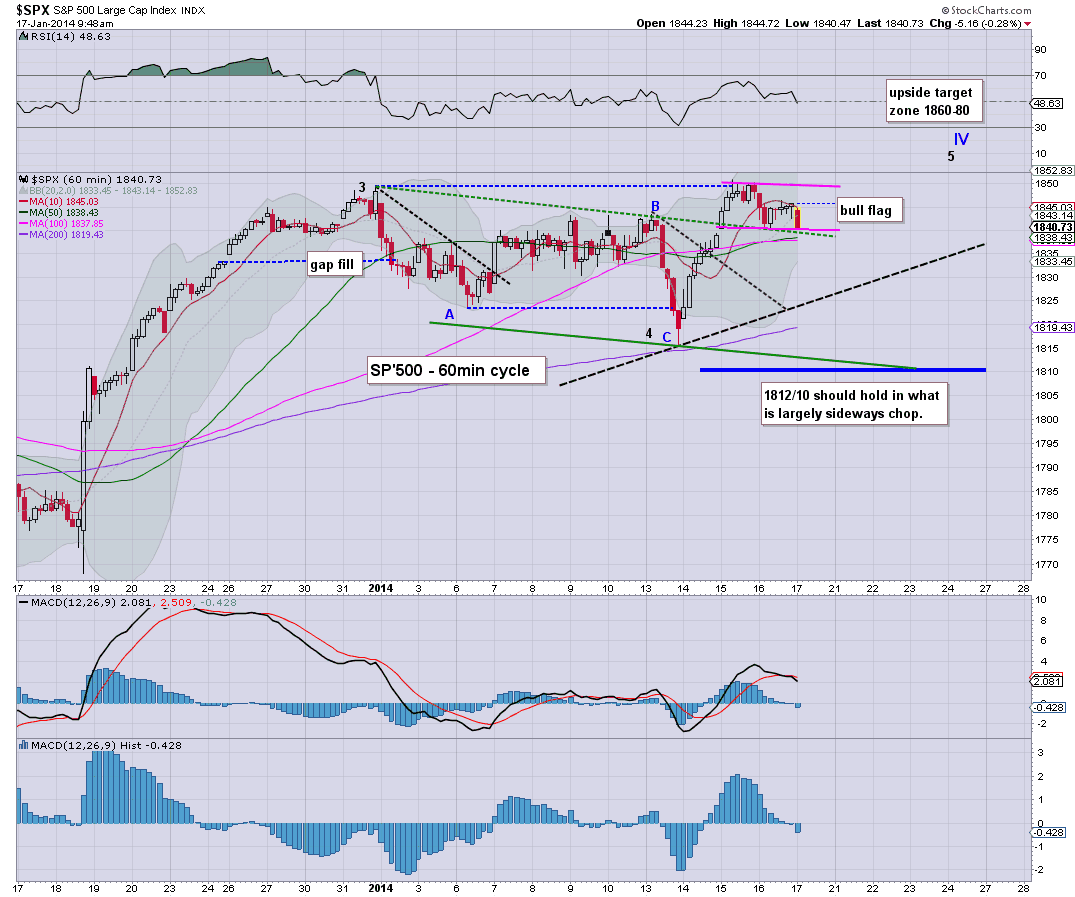 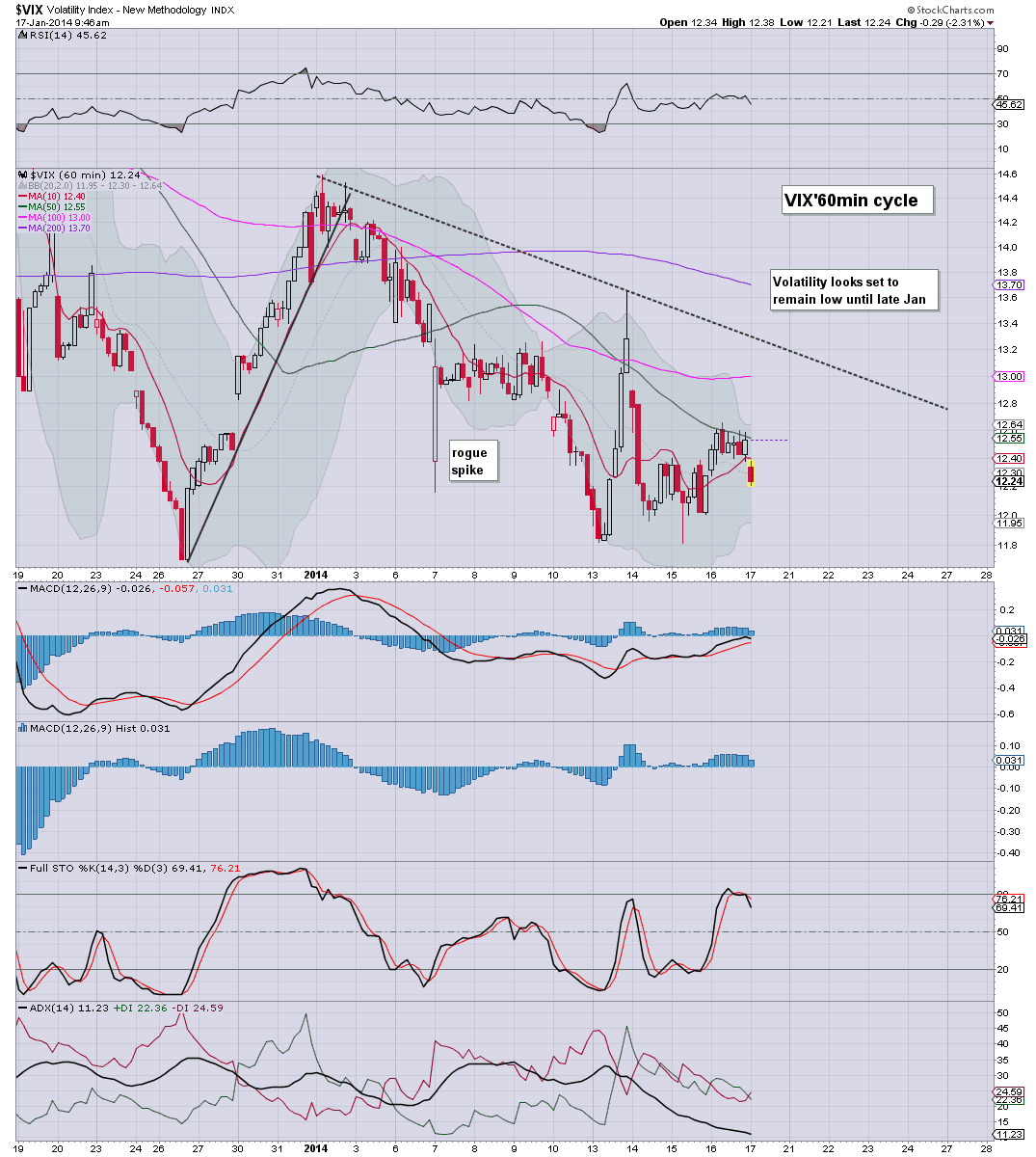 *more than anything..keep in mind, its opex...and with next Monday being closed...could be some real chop as people close out ahead of a 3 day weekend.
---

VIX hourly chart is truly bizarre, when you consider those big swings are merely in a super tight range from 14/11. Even the mid teens are hard to envision for some weeks. The 20s look damn difficult at all this spring.

Strength: TWTR, +6%...naturally, the momo chasers are piling back into that one. URghh

notable strength in MS, +3.8%.
Posted by Permabear Doomster at 14:49:00
Email ThisBlogThis!Share to TwitterShare to FacebookShare to Pinterest

Good morning. Futures are moderately higher, sp +3pts, we're set to open at 1848. Metals and Oil are similarly, a little higher. Today is opex, so..some chop is likely. Equity bulls should be content with any weekly close in the 1840s. 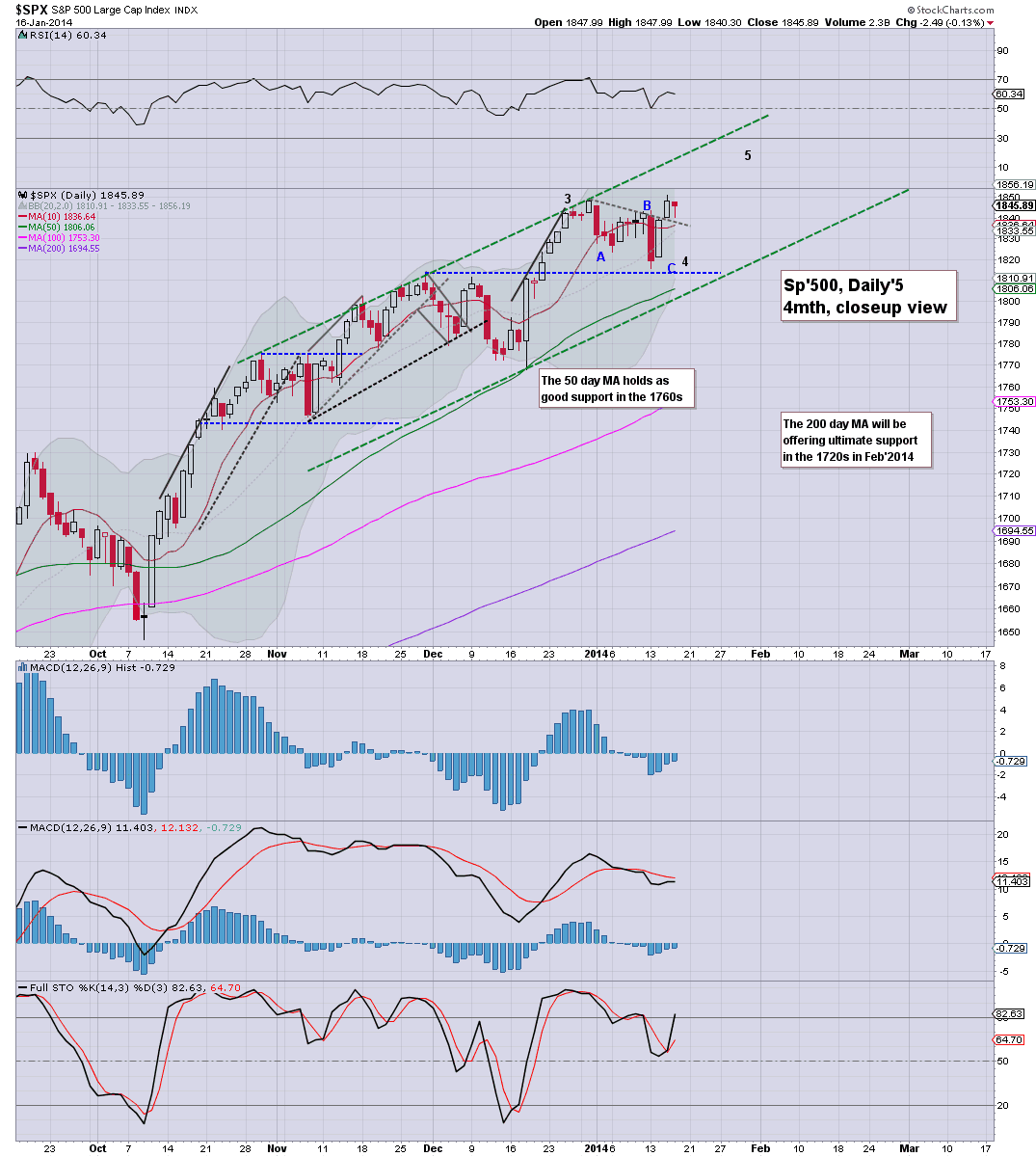 Today is opex..so expect some chop. We've some QE-pomo,  so...what little selling there is..should be more than offset.

A weekly close in the 1850s would confirm yet another failed attempt by the bears to break this market lower.
--

With the bull flags holding..naturally he is bullish into next week. I'm almost a little surprised he hasn't called for the sp'1900s yet.
-

...and another one leaves

As the market continues to battle upward, fewer chartists and traders remain. No doubt, more will leave in the months and years ahead. Contrary to what some might think...I intend to be the last one standing, long after the maniacs on Zerohedge have been ground into dust. 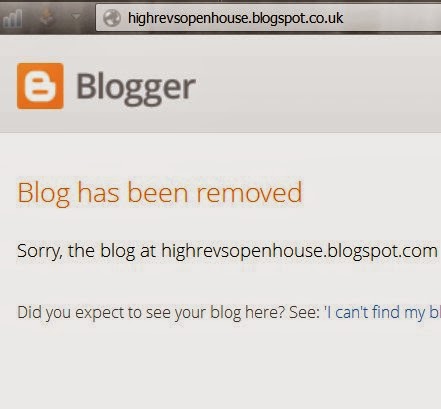 A lot could be said about the past week or so in the market.  Perhaps..its better left for another day. Suffice to say...I ain't going anywhere.
- 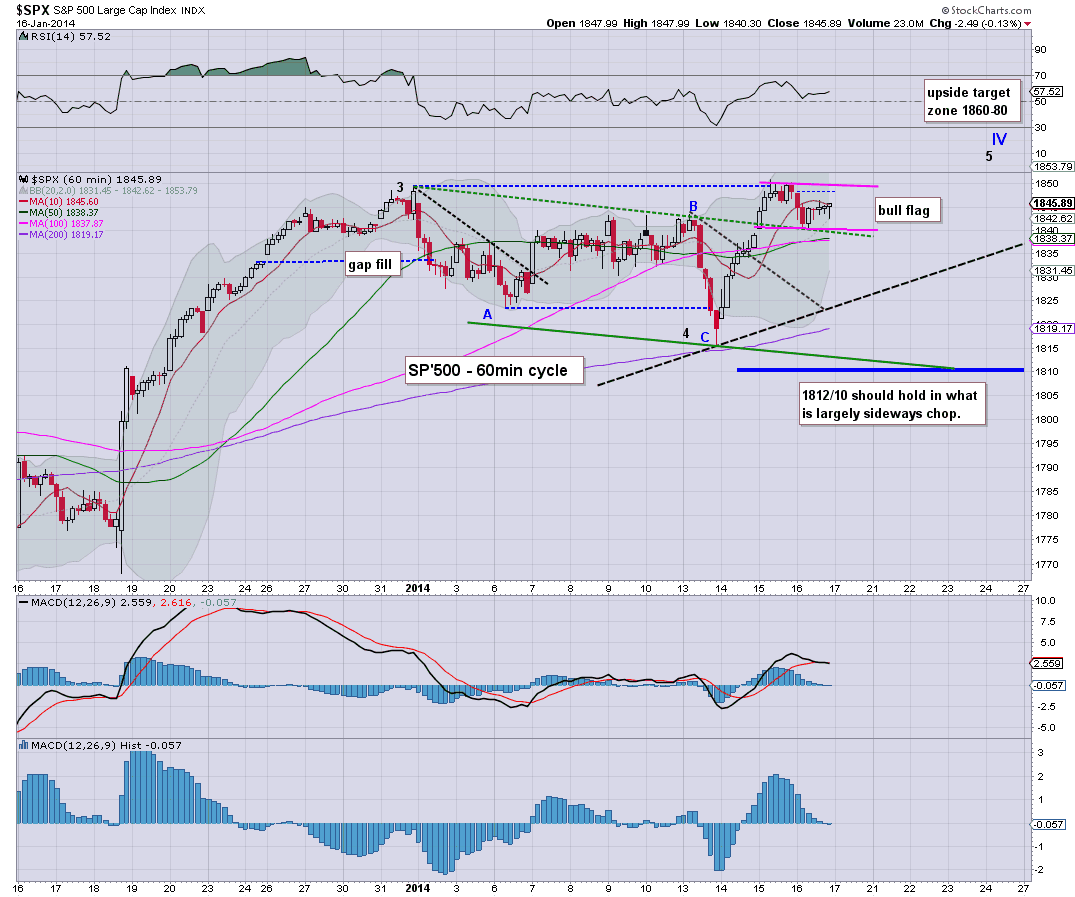 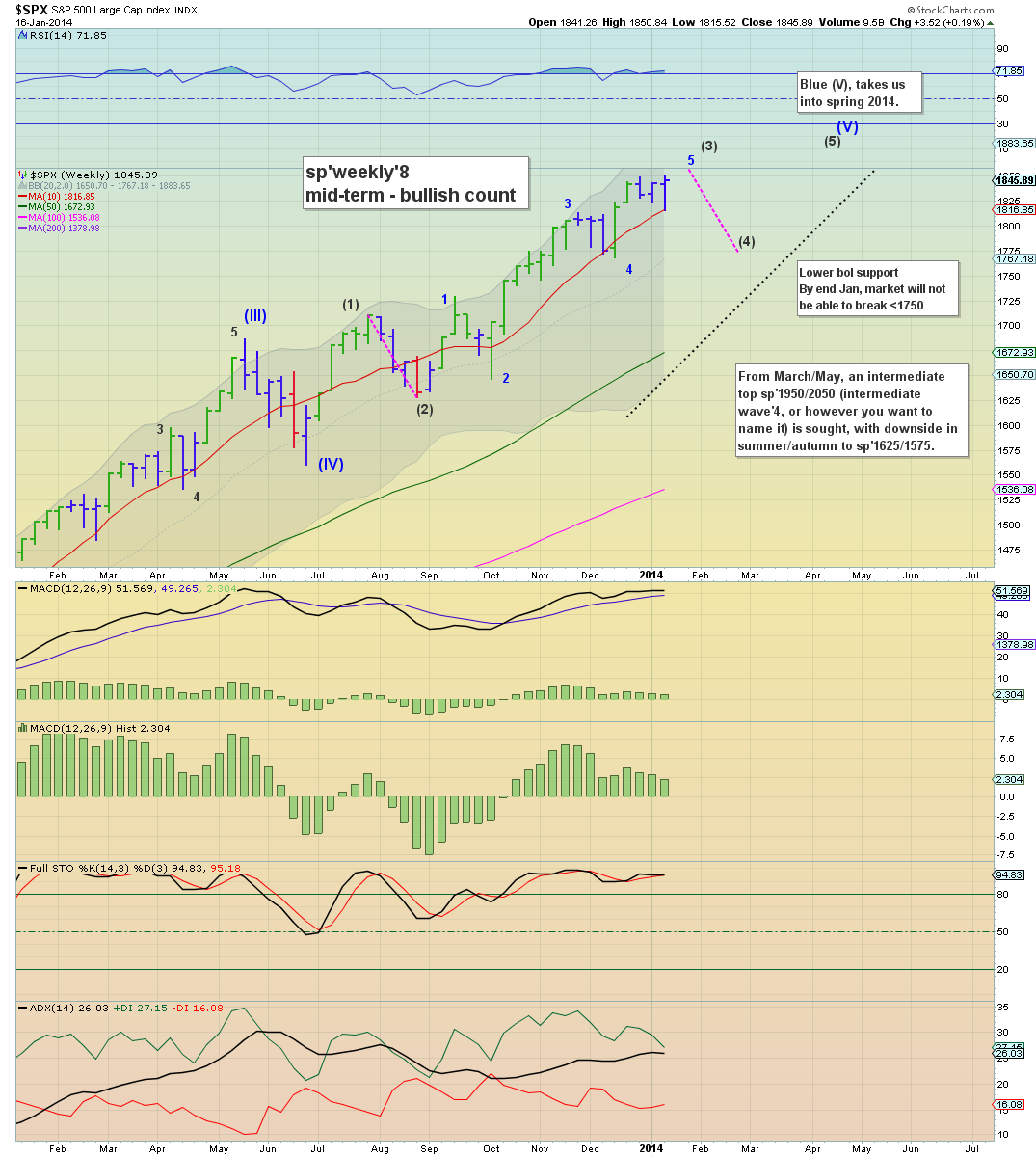 As expected, today was just minor chop..mere price consolidation before the next move upward. A weekly close in the sp'1855/65 zone looks highly probable. Even the 1830s are now looking out of range for those on the short side.

The original weekly'8 outlook remains on track. I'm guessing we are in the last week or two of sub'3 of big'3 - which looks set to conclude late Jan/early Feb. From there, I'd seek a 3% decline - analogous to the action of last Aug/Sept'. Certainly..that level of decline is nothing for the equity bears to get excited about, and I don't think its tradeable anyway.

For me, it is all about waiting for the late spring, as has been the case..since last June/July.

Friday is opex, so..expect some chop. We have a little array of econ-data, housing starts, indust' prod', and consumer sentiment. Certainly, if some of those come in 'reasonable', market will likely use it as an excuse to rally into late morning.. the sp'1860s are most certainly viable.

Equity bulls should be content with any weekly close in the 1840s..or higher. On the flip side, equity bears can understandably be dismayed that 1815 now looks like a solid short term floor.

A fair few are still clinging to the doomer outlook though. Most notable, the infamous Daneric. Mr 'I call a top just about every day' Daneric is still touting an equity collapse. Then there is Deflationland..whom has a serious case of 'Danericitus'. I'm not sure if it is curable.

So..I am in the process of shuffling/deleting links (as I periodically do anyway). Actually, I should note, if you know of a good site I don't have listed, let me know.

As for blogger 'HighRev', maybe that poster will return. I would hope so, he was one of the better..more objective chartist out there. Yet, so many have disappeared over the last five years, and most are usually never heard from again. Here is something to try...go look at the blog links for most of the chart sites out there. Those that are in time order make it easier, I've come to realise that 50% of the links are usually dead/expired.

It is very saddening, but the disappearing sites/people are very indicative of everything that has occurred since spring 2009.