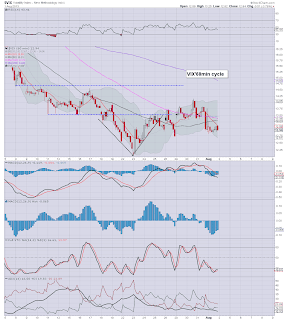 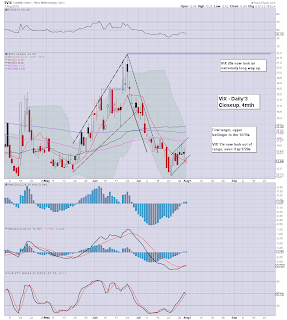 So...the VIX is back in the 12s, but it does seem likely that the 11s won't be hit in the current equity up wave.

Again, the underlying MACD (blue bar histogram) ticked higher for the eighth consecutive day, and is in a positive cycle for the second day.

For those seeking much higher volatility, it is probably important to note the still declining upper bollinger on the daily charts, currently @ 15.02, but that will be on the 14/13 border by the middle of next week.

Certainly VIX in the high teens looks unlikely in the next two weeks, but it looks very viable in the second half of August.

The real issue is whether VIX 20s can be hit in the next equity multi-week down cycle. Considering the mainstream delusion that 'everything is fine', and the ongoing QE fuel, VIX 20s will be 'difficult' to hit..even if sp <1600.
--

Another day of bullish hysteria in market land, with all the indexes seeing significant gains. The sp +21pts @ 1706.The market leaders - Trans/R2K, saw powerful gains of 3.3% and 1.4% respectively. This likely remains sub wave'5, and we're now within 1-2% of a top. 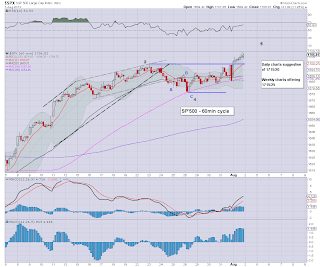 I realise, for those already short.some from days..or even weeks ago, this remains a contemptible and nasty market.

I can only say that I am holding to my original outlook, a multi-week down cycle..into early September...somewhere in the sp'1600/1550 area.

Today was merely another reminder of just how stupid this all is.
--

I remain on the sidelines, seeking a heavy index short in the sp'1715/25 zone...tomorrow...or no later than early next week.
-

the usual bits and pieces across the evening...
Posted by Permabear Doomster at 21:02:00
Email ThisBlogThis!Share to TwitterShare to FacebookShare to Pinterest

3pm update - another day for the bull maniacs 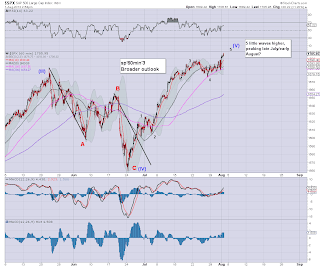 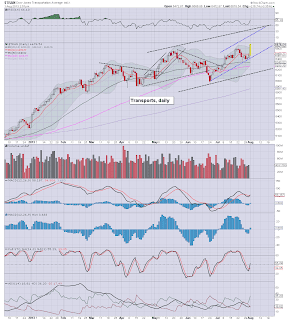 Bears will need to carefully consider how high the tranny might go in the current wave, perhaps another 1.5% ?
--

Regardless, no reason why we won't battle a bit higher into the close.

*I look forward to seeing what everyone else posts up this evening.  Are we all agreed.. 1720s...?
Posted by Permabear Doomster at 19:56:00
Email ThisBlogThis!Share to TwitterShare to FacebookShare to Pinterest

Market is still comfortably holding the sp'1700s. The 5/15min cycles will be fully reset by 3pm, offering a further mini ramp into the close. After all, more 'green shoots' jobs data loom for tomorrow. Oil remains exceedingly strong, +2.7%. Bullish US driving? 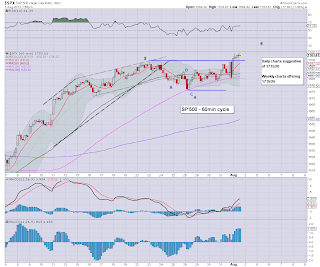 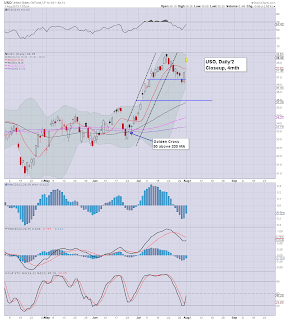 At what point will the money printing maniacs care that Oil put in a significantly powerful July close?  $120? $150? Will that force them to stop QE?

--
Quiet afternoon...but yes..I think a little ramp into the close..1706/08.., and that will open up the 1715/25 zone tomorrow..or early next week.
Posted by Permabear Doomster at 18:59:00
Email ThisBlogThis!Share to TwitterShare to FacebookShare to Pinterest

The market is very stable after the initial break into the sp'1700s. There would seem very low probability that the bears will manage to close the market <1700 by the close. Indeed, there should be some follow through to the upside tomorrow. Target remains the 1715/25 zone. 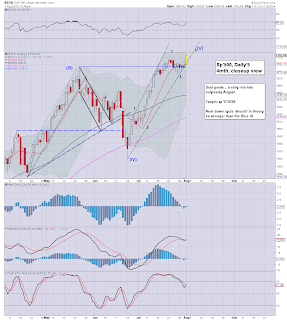 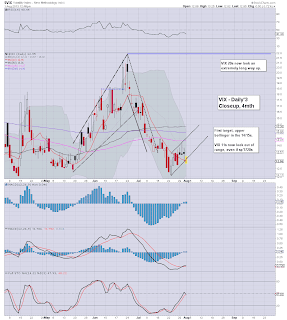 I am more than content to wait until tomorrow, and see how we open after the monthly jobs data.
I'm guessing up!

The big money is starting to build their VIX call positions for Sept/October
Posted by Permabear Doomster at 17:52:00
Email ThisBlogThis!Share to TwitterShare to FacebookShare to Pinterest

The market is comfortably holding the sp'1700s, and the bulls - not least those maniacs on clown finance TV, are probably approaching max-arrogance. After all, the economy is fixed now,  and the Fed will stop any 'problems' from ever happening again. 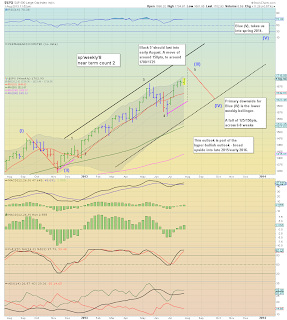 time for lunch :)
Posted by Permabear Doomster at 16:55:00
Email ThisBlogThis!Share to TwitterShare to FacebookShare to Pinterest

The issue now for the bulls is whether they can hold sp'1700s into the close. Regardless, this mornings gains are pretty significant, and we are surely in the strongest part of the final sub'5 wave. Target remains a peak somewhere in the 1715/25 area..tomorrow, or early next week. 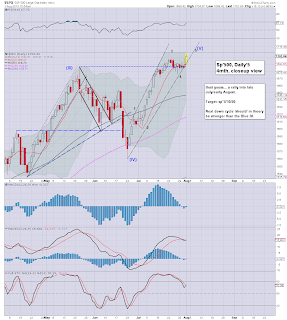 Underlying MACD (blue bar histogram) is turning upward again, and we're set to put in a smaller tower/block across the next few days.

Certainly, the rest of today is just about seeing what those bulls maniacs can manage.
Posted by Permabear Doomster at 15:56:00
Email ThisBlogThis!Share to TwitterShare to FacebookShare to Pinterest

The bulls have managed to break into the sp'1700s, and the door is now open to a very likely cycle top in the sp'1715/25 area. Oil is soaring +2%, whilst the precious metals are really the only weakness out there, Gold -$2. Market is getting rather close to maxing out ;) 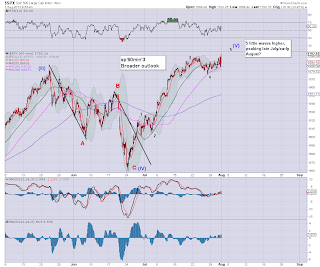 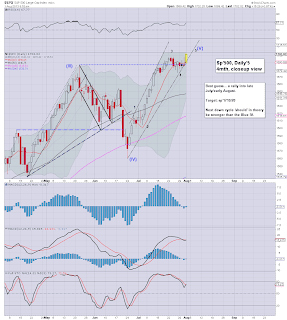 So..the bulls manage to keep things simple, and jump the market into the 1700s early on.

--
The higher we go, I think bears can fine tune a pretty good entry for this sub'5 wave.

Without question, there is NO need to be shorting today...not least with the jobs data tomorrow.

If the market spikes early tomorrow, into the 1720s...I will be hitting buttons.
--

The good bear...is the patient bear.
Posted by Permabear Doomster at 14:54:00
Email ThisBlogThis!Share to TwitterShare to FacebookShare to Pinterest

Good morning..and welcome to August. Futures are higher, sp +10pts, we're set to open at 1695. Precious metals are flat. whilst Oil is building on yesterdays gains, soaring, +1.9%. Bulls look set for yet another challenge of the sp'1700s. 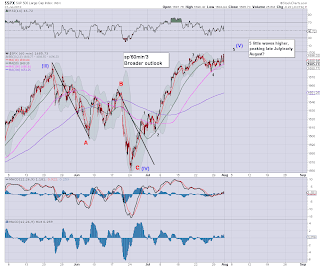 Well, you'd have to think after yesterdays post-FOMC chop, we'll put in a close in the 1700s today.

Certainly though, bulls will need to push hard in the morning, otherwise the gains could fail again.

Considering there is 3-4bn of QE-pomo this morning, I think its safe to assume we will at least close positive, and that sets up my original target of the sp'1710/20s.

--
For the bears out there looking to short...just a little more patience seems required.

Open air to the upper daily bollinger..currently @ 1715...very viable tomorrow.
Posted by Permabear Doomster at 13:24:00
Email ThisBlogThis!Share to TwitterShare to FacebookShare to Pinterest

July comes to a close, with the sp'500 gaining around 5%, which is a very significant gain on any basis. All things considered, the market still looks set for another 2% of gains, before the next multi-week down cycle across Aug/Sept. Downside target is 1600/1550. 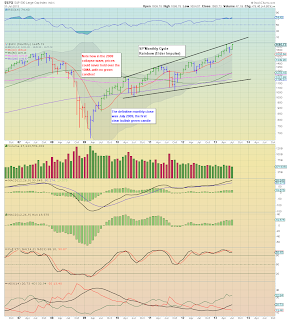 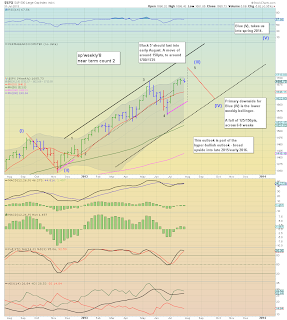 Well that's it for another month, it was certainly another one for the bulls to tout as theirs.

Despite the monthly gains, the indexes are clearly struggling, we have been stuck just under sp'1700 for around two weeks.

I am holding to my original best guess, that the market has another 2% or so of upside. With the big monthly jobs data this Friday, I still think there is a chance for the bulls to smite the bears one more time, before the next multi-week down cycle.

I will look to short the indexes somewhere in the sp'1710/20s, likely no earlier than late Friday morning, but possibly as late as early next week.

With the futures already sp +8pts (as of 10pm EST), I thought I'd throw this chart out there again. Its just an idea for later in the autumn.

Say the market drops 'swiftly' into early September, then a bounce...but one that is cut short if the Fed reduce the QE - at the FOMC of Sept'18. 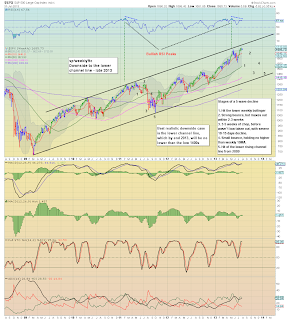 Unquestionably, we are due a multi-month down cycle, at least something in the style of summer/autumn 2011. The disturbing thing - at least from a permabear perspective, even the sp'1450s by year end would do no damage to the primary up trend.

There is a little array of econ-data tomorrow, weekly jobless, ISM manu', and construction data.

So...that's it for July...I shall hope Aug/September have at least some reasonable price volatility, if only for 'entertainment' reasons, never mind for actual trading purposes.

The market saw a rather choppy day, after the FOMC again confirmed..'nothing changes'. Whilst the sp' closed effectively flat, the market leaders - Trans/R2K, still managed moderate gains of 0.2% and 0.6% respectively. Near term trend is still somewhat to the upside. 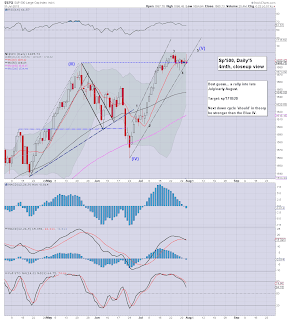 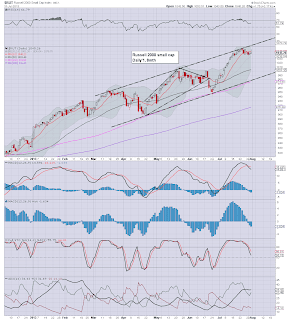 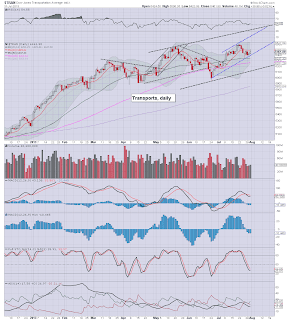 Well, no one can say today was 'boring'. The morning strength, with a spike to sp'1698..really suggested a close in the 1700s was likely..but no.

Once again the bulls failed to close above a very obvious psy' level, but I have to note, considering the strength still being seen in the Trans/R2K, I'm going to hold to the original target of sp'1710/20s within the near term.

Indeed, another 'small' up cycle will set up some perfect divergences across many indexes into next week...and that is where I believe the next super-short trade opportunity will be.

*I remain entirely on the sidelines..and seeking an index short from the sp'1710/20s, right now that seems viable by this Friday, but I'm in no hurry to take on a heavy short position across the weekend.