Volatility down yet again

With the main US indexes holding gains of some degree across the entire day, the VIX was naturally lower, closing -2.9% @ 16.37. The big question for VIX traders is whether 16.00 was the floor in this latest multi-day fall from the high 21s. 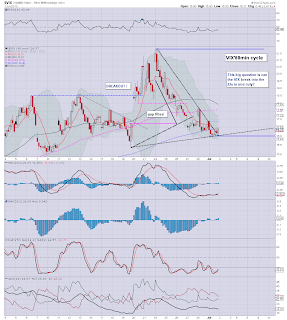 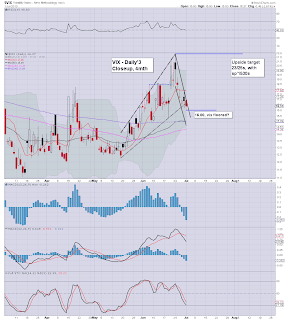 Considering the sp' broke into the mid 1620s, its almost a wonder that the VIX didn't break back into the 15/14s.

Yet, there is a lot of key jobs data in this short holiday trading week. No doubt a lot of traders are now somewhat anxious - after the recent ramp from sp'1560 to 1626, to avoid a possible Wednesday/Friday equity smack down.

Equity bears can't really have any confidence now until VIX is back above the ever-important threshold of 20.

All things considered, VIX 20 does look rather unlikely at any point this week.
Posted by Permabear Doomster at 23:00:00
Email ThisBlogThis!Share to TwitterShare to FacebookShare to Pinterest

After hitting sp'1626 by late morning, the market got stuck, and saw increasing weakness into the close. The daily charts are still bullish after what has been a significant ramp from the 1560 low. Yet so long as the bears can hold the market <1630, much lower levels are still viable. 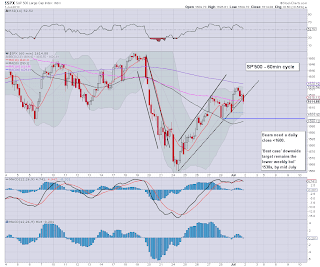 Regardless of the closing hour weakness, today made for a rough start to Q3. The break back above sp'1620 was just another reminder to the bears of the underlying strength in the US market.

*Tuesday, no sig' QE, only factory orders data in the morning. Bears need to break back under 1600. With a very large QE on Wednesday, a very hard battle is ahead.
Posted by Permabear Doomster at 21:01:00
Email ThisBlogThis!Share to TwitterShare to FacebookShare to Pinterest

3pm update - rolling over into the close

The situation is much like Friday, with the hourly index charts rolling over. The VIX looks to have floored @ 16.00, although both equity daily and VIX daily charts are in favour of the bulls. The bigger weekly index charts remain on the borderline. 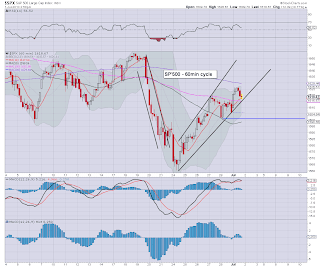 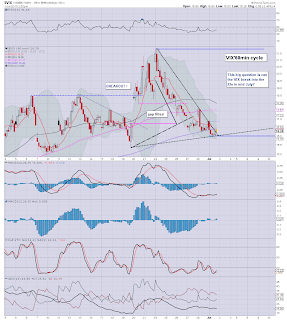 A rough day for those still resolutely on the short side.
-

Some weakness into the close looks viable, and for the bears..there is at least no significant QE tomorrow.
-

I remain short this nasty market, but any daily closes in the 1630s, and I'm likely out..regardless of price/loss.

I still won't have ANY confidence on the downside until a daily close <1600. Even then, I'm very concerned the market will ramp on all subsequent QE days.

3.41pm..bears should seek a VIX close >16.50, with sp <1615, All things considered, that would more than suffice for what has been a difficult day.
Posted by Permabear Doomster at 19:53:00
Email ThisBlogThis!Share to TwitterShare to FacebookShare to Pinterest

The market is still holding rather significant gains, and baring a break <sp'1615, the bears are in serious trouble. Precious metals are significantly higher, although it does nothing to negate the bigger weekly/monthly down trends. 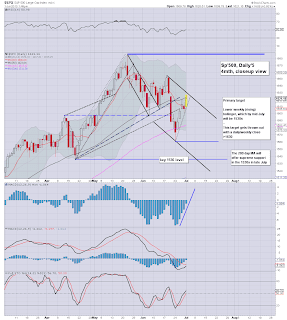 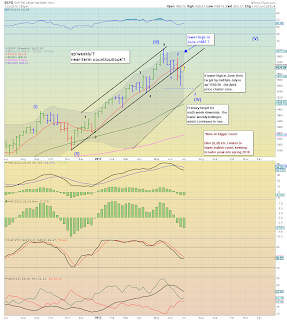 Again, I'll highlight the bigger weekly chart. Its still holding a blue/neutral candle, but ANY daily close in the 1630s, will effectively destroy what little chance there remains of a further wave lower.
--

Rather than watch the cheer leading maniacs talk about how 'Monday is the new Tuesday', how about....


Now, I'm sure you probably won't understand a word of what they're saying, but watching a revolution live..that's pretty interesting.

Still, bears really need sub 1615s, to have any moderate hope for Tuesday. Even then, what matters is a daily close back <1600..which looks a tall order on any outlook.

VIX appears to have floored @ 16.00, but its going to take one hell of a strong kick higher, just to get close to 20. Considering its holiday week, I just don't see that as viable.
Posted by Permabear Doomster at 18:51:00
Email ThisBlogThis!Share to TwitterShare to FacebookShare to Pinterest

The broad upward trend from the sp'1560 low continues. Hourly charts are again offering a rollover, but usually we will see a 'latter day melt', and besides, its a holiday week. A close in the 1620/15 zone is the best the bears can hope for today. 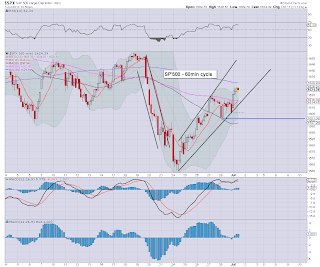 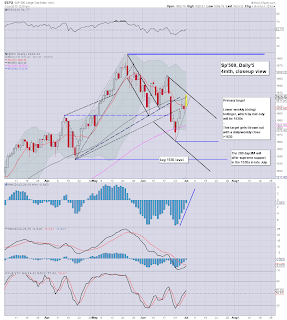 A truly lousy start to the week, with daily charts offering upside of 'some days', if not weeks.

Indeed, if 1560 was a key low, then bears should simply write off July. Ohh, QE will continue in August..and beyond..so.. how exactly is this nonsense going to fall ?

Waste of time...waste of effort.
Posted by Permabear Doomster at 17:53:00
Email ThisBlogThis!Share to TwitterShare to FacebookShare to Pinterest

The market continues to push higher, now filling the gap in the sp'1625 zone. There is empty air above 1630, and if the bulls can close well today, then its game over for those on the short side. Despite the chatter out there, QE does continue...in full. 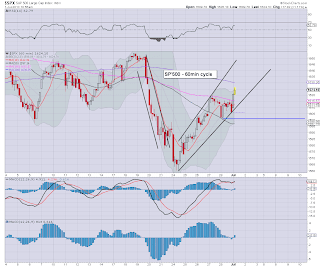 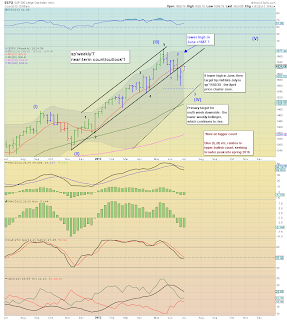 Its a pretty clear situation.

Any daily close >10MA on the weekly..1628/30..and its over. All hopes of further down moves can be thrown out, at least for some weeks, if not..months.

--
I'm way..tired of this...back later today.
Posted by Permabear Doomster at 15:58:00
Email ThisBlogThis!Share to TwitterShare to FacebookShare to Pinterest

The market begins Q3 much as it began the last 16 or so quarters. .bullish. Despite the economic reality, the 'everything is okay' mainstream delusion continues.  Bears should be frankly..terrified of today's QE..and even more so..the Wednesday one. 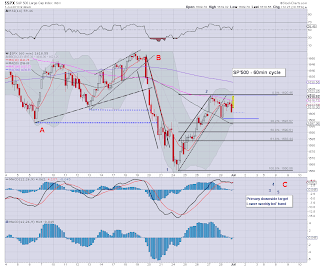 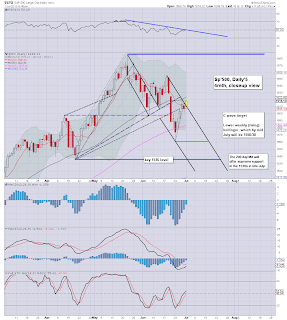 A dismally disappointing start to the week...and indeed, the second half of the year.

Any daily close in the 1630s, and it is surely a case of 'sell/cover' shorts at any price.

I can only hope there is a 'holiday reversal'..as is often the case. Weekly charts remain on 'neutral'..baring a close >1630.

Only now is whether we see a reversal..or if the bulls can manage a daily close >1630.

If the latter, then its game over for the bears...and that would include me.
Posted by Permabear Doomster at 14:52:00
Email ThisBlogThis!Share to TwitterShare to FacebookShare to Pinterest

Good morning. Futures have swung around overnight, and sp' is currently +8pts, we're set to open around 1614 . There remains a clear gap fill zone in the 1625 area, but worse for the bears, there is major QE-pomo, both today, and on the shortened Wednesday session. 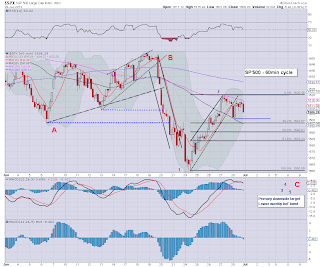 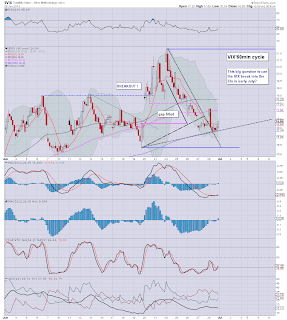 For the bears, this looks to be a pretty bad start to the week.

I suppose we could see a late morning reversal, but why would we? Everything is 'fine again', right?

Bond yields are cooling down a bit, and that will give the cheer leaders on clown finance TV all they need to get hysterical in this holiday week.
--

*I'm heavy short from sp'1601, underwater, and considering bailing for a sig' loss on the next micro-down cycle, later today..or early tomorrow.

Frankly, its all turning into a real mess again for the bears.
-

Video : Oscar is not surprisingly, now talking about a holiday reversal.

I just don't see one happening, with the two large QEs

9.34am..well, as I feared, there is little reason why this nonsense is going to fall.

..and the QE ain't even arrived yet.

Nothing less than another nightmare.
Posted by Permabear Doomster at 13:31:00
Email ThisBlogThis!Share to TwitterShare to FacebookShare to Pinterest
Newer Posts Older Posts Home
Subscribe to: Posts (Atom)