Despite the somewhat dubious drop in the closing minutes, the VIX looks like it is ready to make a jump into the mid teens. The VIX closed -5.9% @ 12.78. Near term price action looks solid in the mid 12s, first upside target are the 15/16s. 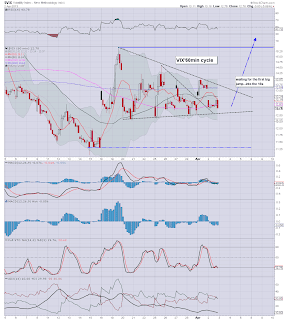 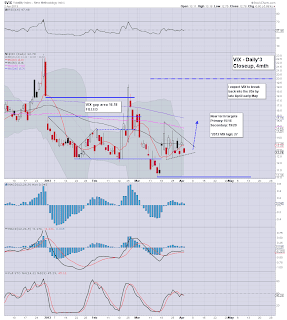 The VIX was looking very comfortable in the low 13s in the closing hour, but with a brief index spike.. the VIX was whacked back to the earlier lows.

I have to say, I'm very dismissive of the closing VIX level. On any basis, it looks like we could be trading in the mid teens within the next few trading days.
--

Certainly, VIX 20s still look a few weeks away right now, but I'm pretty confident we'll get there, not least if we can break <sp'1500.

*I'm looking to pick up a VIX call block within the next 1-3 days.

The market closed somewhat weak, although its very difficult to know if we have just maxed out on this large cycle from the November low. Trans/R2K were especially weak, closing in the red. The precious metals were again sharply lower, with Oil closing fractionally down. 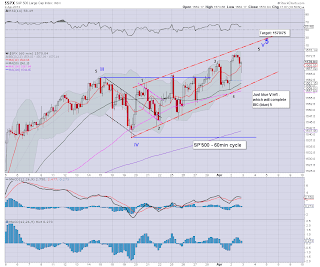 Impossible to say, and with ADP jobs data early tomorrow, we could still do a test of that 2007 high of sp'1576..not that its particularly important in my view.


*I hold an initial short position (USO) overnight..and look to add in the days ahead.

Primary target is the sp'1470s...although that is subject to much revision in the days..and weeks ahead.
--

the usual bits and pieces across the evening.
Posted by Permabear Doomster at 21:02:00
Email ThisBlogThis!Share to TwitterShare to FacebookShare to Pinterest

3pm update - slipping into the close

The market is starting to show a touch of weakness, and the VIX looks like its floored in the high 12s. Near term remains likely to remain choppy, but on any multi-week outlook, we're due to start falling from around current levels. 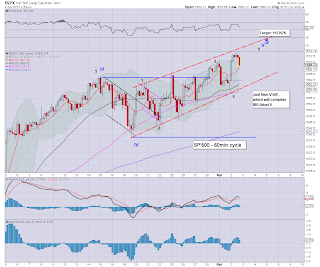 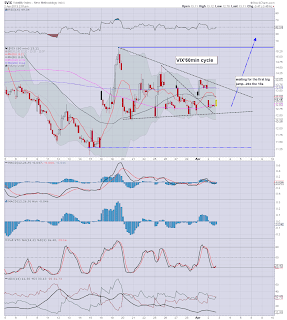 Lets be clear, we could still jump higher at the Wednesday open - not least with ADP jobs data due. Yet, we are NOW in the target zone..and I'm sure not the only one who has been patiently waiting for many weeks.

*I will hold one initial short position (USO), overnight, and will add other blocks across the next few days.

--
A little video bonus from Faber..

back after the close
Posted by Permabear Doomster at 19:52:00
Email ThisBlogThis!Share to TwitterShare to FacebookShare to Pinterest

Mr Market looks somewhat stuck at sp'1571/73. A move to test the 1576 high remains viable at any time. A swift reversal to the downside remains a very real problem to anyone 'heavy long' at these historic levels. VIX looks floored, -5% in the 12.90s. 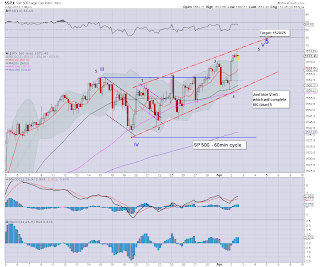 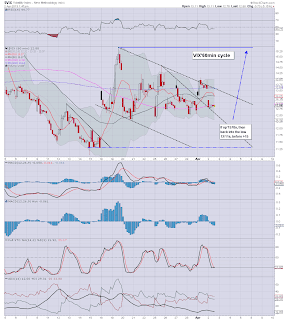 *With the market very close to a top, I am looking to build a series of short positions, with a primary target of sp'1470s by mid-May. 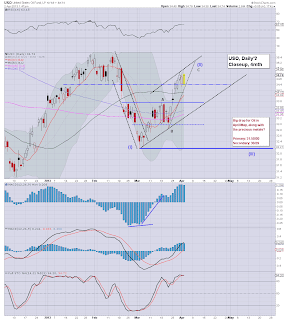 I will also look to short the indexes/long VIX across the next few days.
--

back at 3pm
Posted by Permabear Doomster at 18:50:00
Email ThisBlogThis!Share to TwitterShare to FacebookShare to Pinterest 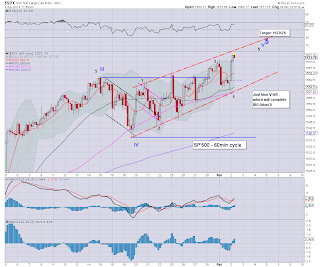 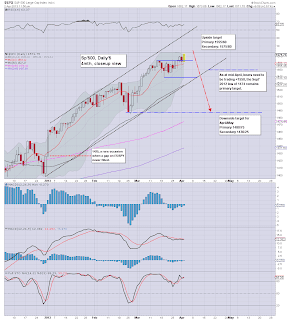 I suppose you could count a sub'3 of final 5 now complete..with just a tiny little 4 down..and then tiny'5 up Wed/Thur.

Regardless...we're about there. Might be mere hours..might be a day or two.

I'm really not going to get too fixated on exact levels...its largely pointless.
-- 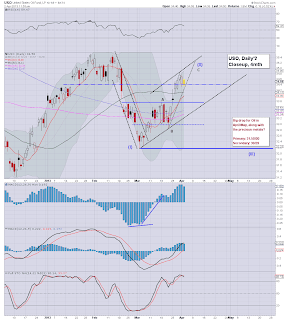 back at 2pm
Posted by Permabear Doomster at 16:55:00
Email ThisBlogThis!Share to TwitterShare to FacebookShare to Pinterest

Good morning. Mr Market opens with some gains, the only issue now is whether we make a challenge today of the Oct'2007 high of sp'1576. Equity bears should be very mindful across the next 6-10 trading hours of a possible swift reversal. USD is a touch higher, Metals are sharply lower. 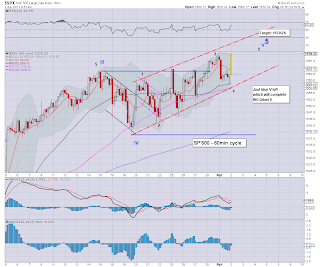 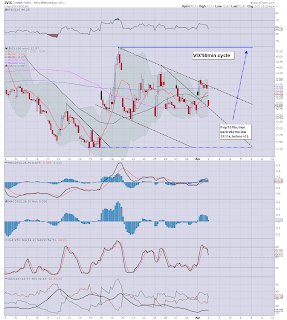 So, we open somewhat higher, and everything is fine, yes?

Cyprus is clearly back to normal, and the green shoots of spring are going to appear everywhere across the northern hemisphere in the days ahead.
--

As for the metals, I'm not sure why they have again got the smack down, but then, near term trend is downward. Whether this is beginning of a April/May collapse wave...impossible to know.
--

USO (Oil)..along with the indexes will be a valid short later today/tomorrow.

UPDATE 11.30am...we're getting there...sp' 1573s...just another few hours maybe..
Posted by Permabear Doomster at 14:53:00
Email ThisBlogThis!Share to TwitterShare to FacebookShare to Pinterest

Still waiting for a spike high

The main indexes started the week very mixed, and there are increasing signs that a mid-term cycle top is being formed. Even if a slightly higher high is hit this week, on balance, a multi-week down cycle looks set to begin. Primary target remains the sp'1470s. 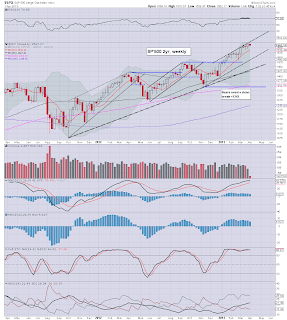 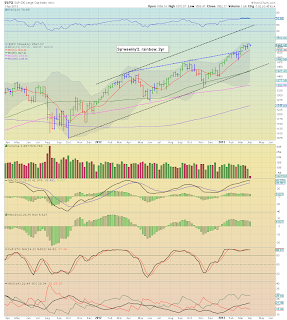 So, a somewhat weak start to the week..and month. Its certainly nothing for the bears to get excited about yet, but the signs are unquestionably starting to build.

Given another 4-7 trading days, we'll probably have seen by then, the first little wave lower..to around sp'1530.
--

Look at the lower bollinger on the weekly charts, its now rising - to be expected, and that arguably represents the 'best bear downside' viable in the weeks ahead.

It is indeed now a race. The faster we fall, the lower we can go. If this down cycle drags out sideways for another week or two, we'll be lucky just to hit the primary target - which is only the sp'1470s.

A choppy and mixed start to the week for the US markets. The Dow managed a flat close, whilst the SP' slipped almost 0.5%, yet the two leading indexes - Trans/R2K, both saw significant falls of 1.5/1.3% respectively. The market is looking increasingly..weak. 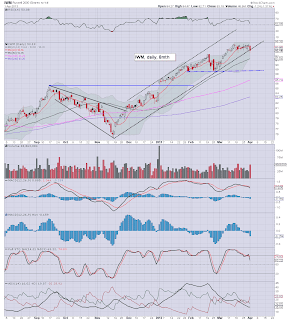 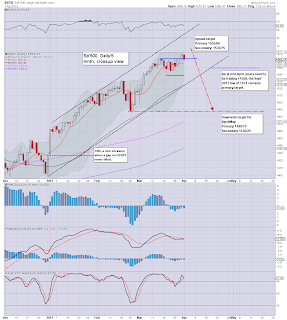 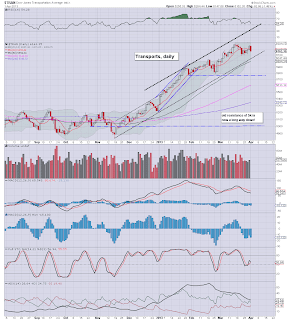 First things first....the near term trend remains UP.  Yes, there are a few signs of weakness, and we even saw the R2K break key rising support today. Yet that is just one index, and the others are far from breaking their support.

The fact the Dow managed a flat close should send some real concern to the bears still. The hourly cycles are now pretty low, and there is a very significant chance of another jump higher into the sp'1570s..perhaps even the 1580s on a spike higher.

We have employment data this week, and if the market decides it likes it, then we'll see prices keep on pushing upward.
--

As many recognise, the market IS looking vulnerable..but so far...there is simply nothing definitive on the bearish side.

As it is, I remain waiting to launch an index re-short on a spike-high, in the 1575/80 zone, which right now, seems more likely on Wednesday.
--