With the bigger weekly and monthly cycles pushing upward, it was always going to be tricky to see even a few days lower, but..the algo-bots are not even going to permit that. The break into the sp'1470s is a further devastating blow to the bears, since the New Years Eve low of sp'1398. 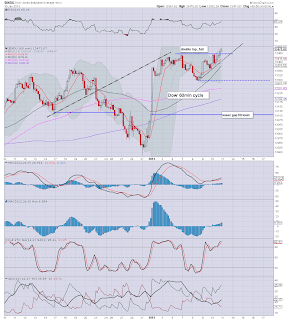 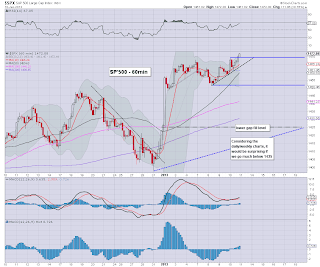 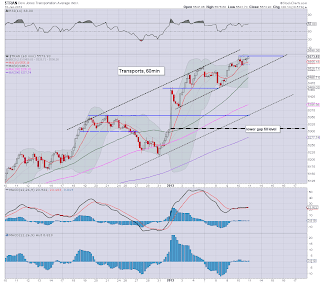 A truly lousy day. The algo-bots seem in full control, and the intra-day down moves are barely even noticeable.

The original retracement target of even sp'1440 now looks out of range, but worse..way worse, is that the daily charts are now back to outright bullish.

For the bears out there...


A daily wrap later..perhaps.
Posted by Permabear Doomster at 21:01:00
Email ThisBlogThis!Share to TwitterShare to FacebookShare to Pinterest

Market appears in classic zero volume meltup mode. No real news..and just very minor melt..to the upside. A break of rising micro-trend support, which at the close will be 1462, even looks out of range. 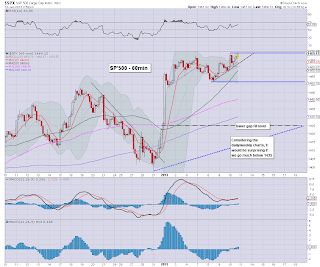 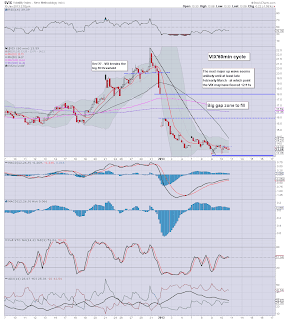 Dull..dull..dull. Friday can't be any more boring, can it?

A close in the 1450s sure doesn't seem at all possible now.  Very disappointing few days.
--

back after the close
Posted by Permabear Doomster at 19:54:00
Email ThisBlogThis!Share to TwitterShare to FacebookShare to Pinterest

The market is still holding onto moderate gains, although we appear somewhat stuck. The VIX looks floored, and upside target zone remains 16/18. An index retracement of around 2% is not exactly too bold -or bearish an outlook across the next 2-4 trading days. 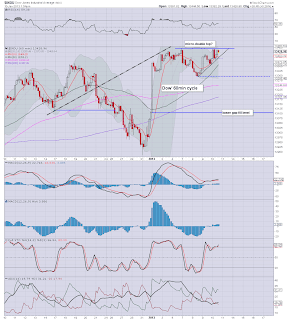 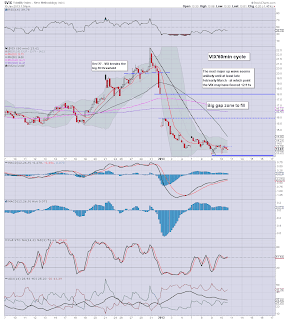 *I remain annoyingly short from 1457, still seeking an exit @ 1445/40.
Posted by Permabear Doomster at 18:57:00
Email ThisBlogThis!Share to TwitterShare to FacebookShare to Pinterest

The market is holding onto slight gains..yet again. We've come within 4-5pts of breaking the Sept' QE highs of sp'1474. Although of course, the Transports and R2K are already far beyond those levels. VIX looks floored on the daily charts in the 14/13 zone..upside remains 16/18. 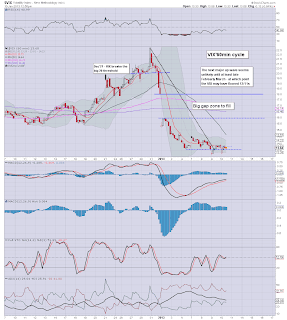 The weather is matching my mood today, and the fact we're higher..that does nothing to help.

A possible double micro-top on the Dow, but that's highly unreliable on such time scales.

The only thing the bears really have left is that the VIX is already smashed so low, it really can't go much lower (at least in this cycle). On any basis, the VIX is due a little spike higher, even if its just briefly to the low 16s.

Yet, its taking too long, and the longer we remain at these levels..consolidating sideways, the bulls can be even more confident of further gains into February
.
Posted by Permabear Doomster at 18:27:00
Email ThisBlogThis!Share to TwitterShare to FacebookShare to Pinterest

This mornings little kick higher to sp'1469 understandably rattled..and short-stopped out a lot of the bears. Yet, there are some signs it was just a fake out. We've some reversal candles, and a few opening black candles on the hourly index charts. 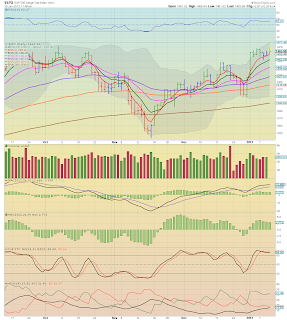 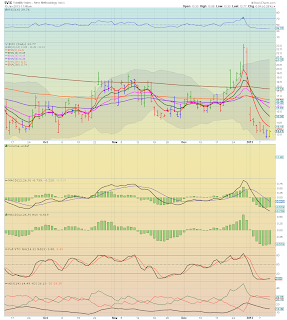 Ignoring the smaller 15/60min cycles, the daily rainbow charts for the indexes/VIX are all warning of a turn.

It has to be said, this is getting frustrating though. Baring a massive renewed push higher >sp'1474, we are still due at least some level of retracement, somewhere in the sp1440/25 zone.

Its just taking a lot longer than I had thought.

Time for lunch!
Posted by Permabear Doomster at 16:50:00
Email ThisBlogThis!Share to TwitterShare to FacebookShare to Pinterest

With a break to 1469, the market is still showing the underlying strength, as best seen on the bigger weekly/monthly charts. Even if 'somehow' a retracement occurred to the low 1420s..it makes no difference. Broad trend is UP. 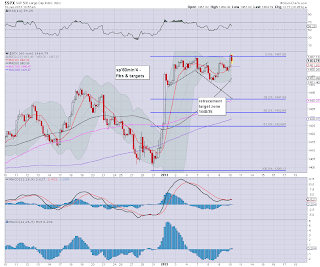 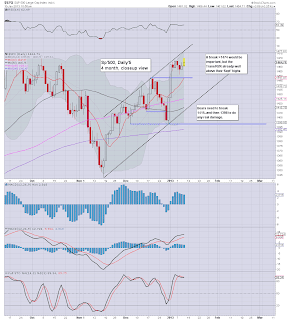 I'm getting really tired of this nonsense..and its only January'10th.

The one hope for those still seeking a retracement is the VIX. 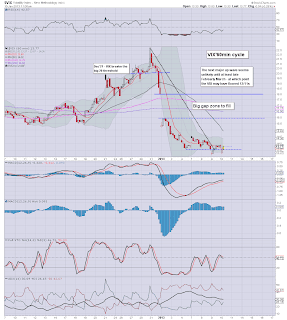 We have a reversal candle to start the day, but really, 16s are a good 15% higher from current levels, and thats asking a lot.

The daily rainbow chart is putting in a third provisional warning, 3 blue candles..in what is 'sort of' a 7 day flat top from 1451-1469 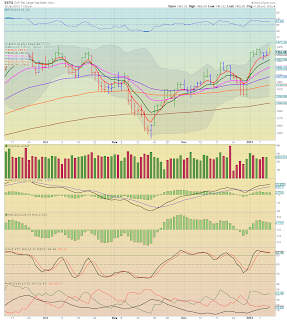 Primary trend is still UP

With the Transports and Rus'2000 climbing to new highs, the market remains significantly bullish. This can especially be seen from the bigger weekly and monthly charts, which look set for further gains into February, and possibly March. 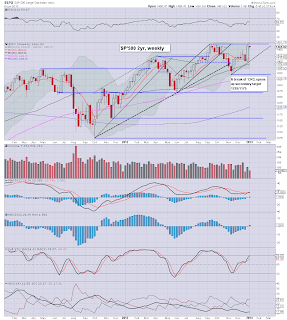 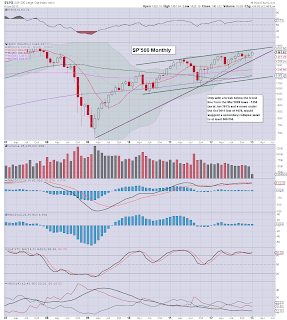 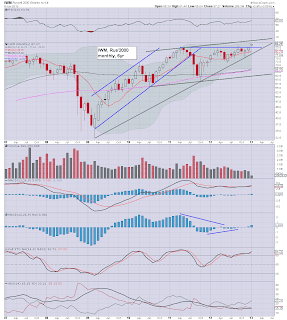 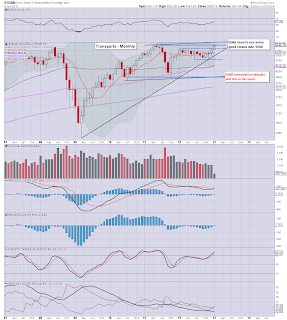 The market is comfortably holding onto almost all of last weeks gains. In fact, the Trans and Rus'2000 are already above those levels. It is the SP/Dow/Nasdaq that are lagging behind, still under the Sept' QE highs.

The weekly chart clearly shows last weeks starkly bullish candle, and so far this week, we've really not seen any form of retracement. Right now, even a move to the low sp'1440s looks somewhat difficult, but I'm guessing we'll get there one way or another.

The hugely important monthly chart is absolutely outright bullish. A very natural target would be the upper bollinger, somewhere around sp'1510/20 in February/early March.

Baring a surprise break below the key 1398 low, this market is unquestionably headed...UP.
--

The main indexes closed moderately higher, lead once again by the Transports and Rus'2000. The more widely followed indexes are still lagging behind, and the Dow/SP/Nasdaq are still to break their Sept' QE highs. 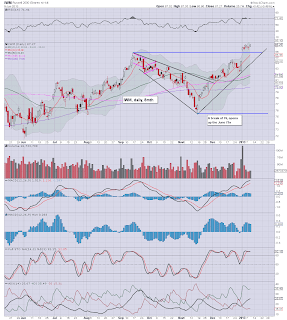 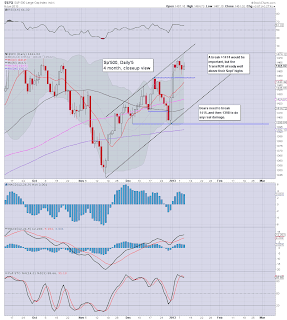 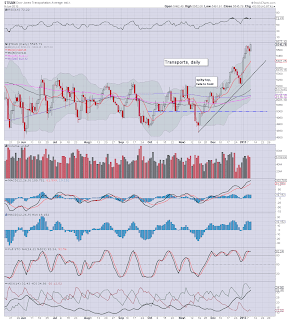 The transports are still looking extremely strong, and even a 3-4% decline down to the low 5300s would not do any damage to the current strong up trend. It has to be said...its a VERY bullish sign for the broader market.

The main indexes are indeed still lagging though, but they are only fractionally below their Sept' highs. It sure won't take much of a push higher to break sp'1474, and the big 1500 will be on everyones' mind.

Underlying momentum (see MACD, blue bar histogram) did tick lower on the SP, Dow, Nasdaq, but its very marginal, and its still very much in positive territory.

All things considered, this remains a strong market, and even a retracement down to the sp'1420s would not wreck the overall upward trend.