With the indexes closing a little higher, the VIX closed naturally..a little lower. What will be crucial tomorrow, is if the VIX can put in a higher low, whilst the indexes spike briefly to new highs, but then sharply reverse. 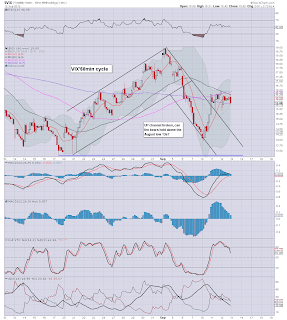 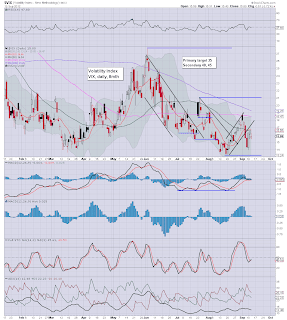 One very important thing the bears should be seeking tomorrow - on a Fed day no less, is a higher low on the VIX hourly cycle, with the indexes putting in brief higher highs..before a sharp reversal.

If that is the case, the bears have a really good chance of at least getting back to the 1400 level, a break of that opens up the first challenge to the key channel/trend line of sp'1375.

Every little dip today was being bought up, although I think the underlying cycle has been clear since Monday...UP.

With the main all closing a touch higher, tomorrow is all set for what could be a VERY major bearish reversal day..after some form of opening gap/Bernanke spike. 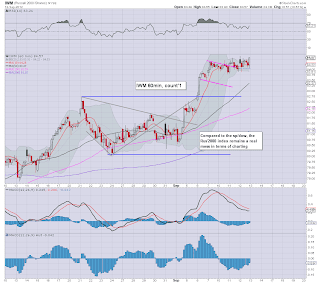 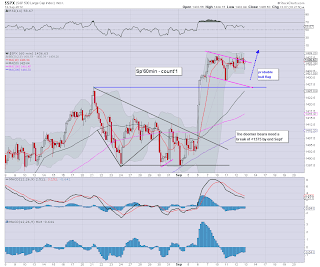 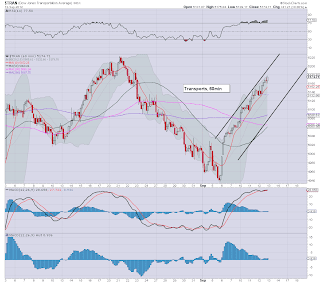 I'm somewhat tired, today seemed busy with a fair bit of 'stuff' going on. At least the German court is out of the way, along with the iphone'5, and now we can focus on what uncle Ben will do.

The media networks seem VERY confident of QE tomorrow, endless guests all day who are all looking for QE of 300bn at least, maybe more.

I'm still targeting a re-short around sp'1445/50, preferably BEFORE the Fed announcement at 12.30pm, but I am trying to keep an open mind...cause you never know.
--

*I think I'll highlight the transports hourly from now on, its a cleaner cycle than the Dow'30, and being the 'old leader', perhaps will be more use as a warning of tops/bottoms.
--

More later.
Posted by Permabear Doomster at 21:02:00
Email ThisBlogThis!Share to TwitterShare to FacebookShare to Pinterest

Now that the AAPL iphone5 launch is done, we can move away from the latest media hysteria about what is..just a mobile telephone. VIX remains weak, but is comfortably holding at 16.00, significantly above the recent low of 14.00 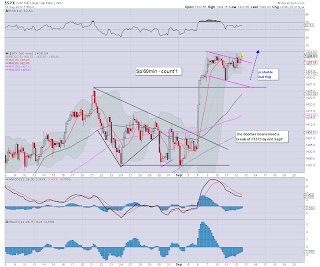 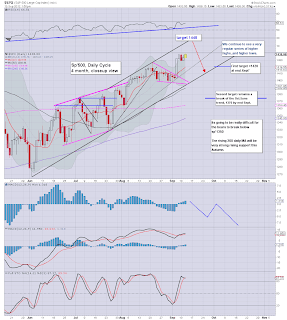 I can't possibly see 1460 under any circumstances, even if the Bernanke does some sort of QE. Watching Bloomberg earlier, the consensus seems to be that the Fed might do some sort of MBS monthly purchases of 300bn or so.

Frankly, if that's what the Fed does, its laughable negligible.

So, I'm sitting it out until tomorrow. Near term trend - see hourly MACD (blue bar histogram) cycle is still crawling higher. We could in theory get a snap higher at the Thursday open to 1445, even 1450 if Mr Market wants to cause maximum carnage.

Considering the daily cycle - which is surely close to maxing out, tomorrow could be a classic 'sell the news' day.

Posted by Permabear Doomster at 18:54:00
Email ThisBlogThis!Share to TwitterShare to FacebookShare to Pinterest

Market seeing some morning chop, but things are still broadly up in the immediate term.

There is certainly no point shorting at this time..or price. 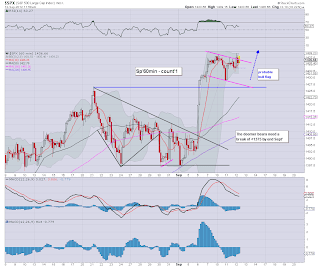 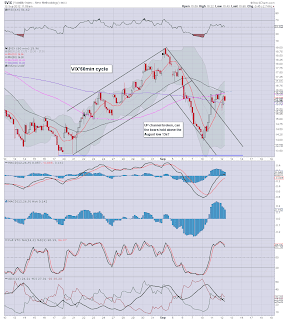 So..I'm just waiting, and considering the MACD hourly cycle is still negative, I will very likely wait until tomorrow.

There is still a very viable chance market will hit 1445..even 1450 tomorrow..BEFORE the FOMC announcement at 12.30pm.

I have no concerns about shorting at the current level, but I do think there is more upside  to come.

The most patient bear...gets the best entry price ;)

Back at 2pm
Posted by Permabear Doomster at 17:00:00
Email ThisBlogThis!Share to TwitterShare to FacebookShare to Pinterest

10am update - on schedule

Its all on schedule right now :) We have all the main indexes putting in further gains, the VIX is a little lower, with the market is looking forward to more printing to be announced tomorrow. 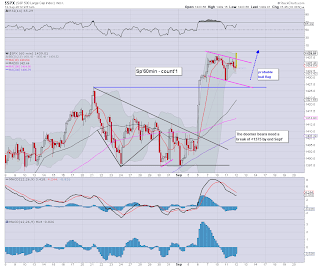 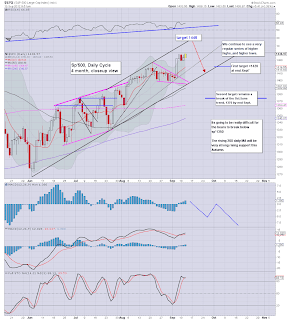 Its looking pretty good for a re-short somewhere in the 1445 range late today/early tomorrow. I'd guess worse case upside is a brief Thursday spike to 1450/60 if QE is announced.

For the moment, I am still waiting for the underlying MACD hourly cycle to crawl higher..and then level out.

We might level out by around 2pm or so. If so, I'll likely short near the close.

Back at 12pm
Posted by Permabear Doomster at 14:53:00
Email ThisBlogThis!Share to TwitterShare to FacebookShare to Pinterest

Good morning. The German court (as most expected) voted yes to the ESM bond buying, so, no market upset today. Futures are a touch higher, sp +3pts, we're set to open around 1435, just 3pts below the recent high. 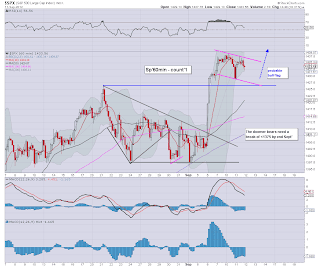 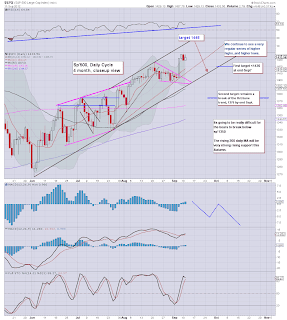 So, with the Germans voting yes, that's one major hurdle for the bulls out of the way. All the bull maniacs need now is for Benny to at least 'strongly hint' at forthcoming QE, or indeed actually announce new QE itself . I not expect the latter, and for this reason, I think the market will eventually sell off after any initial spike higher.

Considering the MACD on the hourly index cycle I'm still very reluctant to re-short, although we're pretty close to my price target level of 1440/45. I suppose its possible we'll spike briefly to 1450/60 if new QE is announce, but as noted, I'm guessing....no.

Good wishes for Wednesday trading!
Posted by Permabear Doomster at 13:17:00
Email ThisBlogThis!Share to TwitterShare to FacebookShare to Pinterest

With the German court ruling tomorrow, and the Fed decision this Thursday, the next few days will be pretty dynamic. Also important to keep in mind, we have retail sales data this Friday.

From an index point of view, its clear sp'1400 is now the first line that the bears need to break. So, even if the Germans and/or the Bernanke upset the market, the bulls have a clear 33pts buffer zone of comfort. 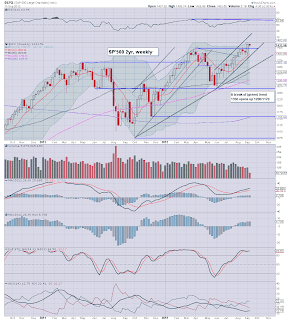 Bulls have had a great run from the June low of 1266 to 1433, that's a very significant 167pts in just over 3 months. At the current rate of increase, we'll close 2012 @ sp'1600. Now that is probably the most disturbing trend/outlook I've posted in some months.

From a MACD (blue bar histogram) cycle, we are potentially levelling out on the cycle, but really, it will take at least 2 or 3 weeks to have any confidence that a rollover is taking place. Of course, right now, prices are still very much in an up trend.

One key aspect that I think is paramount to keep in mind - whether bullish or bearish minded, is that a break of 1350, will in theory at least, open the door to a fast move to 1200/1170, as based on various monthly support/MAs. The notion that the Sp' will be at 1350 sometime in the next month or so, that's a pretty bold target, considering the present general weekly trend.

So, all eyes to the German constitutional court tomorrow, lets see if they are obedient to the ECB wishes, and vote Ja.

The main market close broadly higher, only tech' was a little laggy , largely due to mild concerns about how AAPL stock will react after the iPhone5 is launched.

Broadly speaking, the near term trend most certainly remains UP. 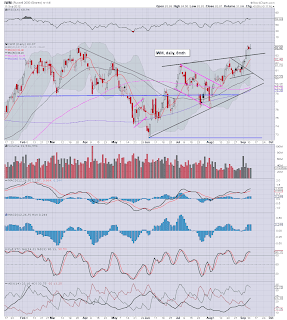 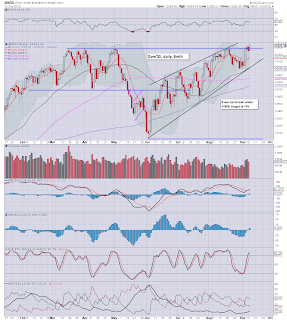 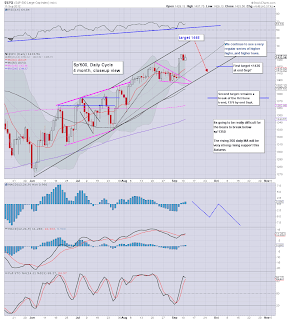 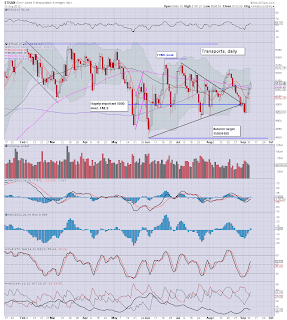 Interestingly, - as I often note, the transports showed leadership today, and closed reasonably well. There can definitely be expected further upside tomorrow, and possibly at least the earlier part of Thursday.

The Dow put in a new closing high today, bullish?


What happens Thursday with the Fed?

It is any ones guess what the Fed do, but as some have been stating lately, the Fed have NEVER pre-empted a down cycle with QE (twist does not count). They have always waited. Those expecting some kind open-ended QE to be announced this Thursday, I believe they will again be very disappointed, and sell..potentially quite hard.