The VIX did break through the 21 level today..but only briefly. The close of 20.08 was still positive, but considering the weakness in the main indexes, bears should probably be a little disappointed. However, with the break of 21, the door is now open to around 24. 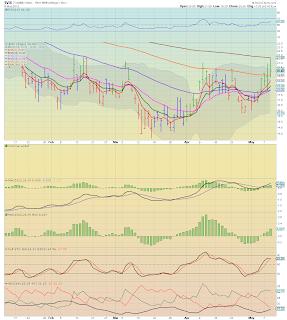 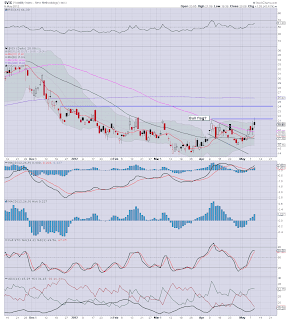 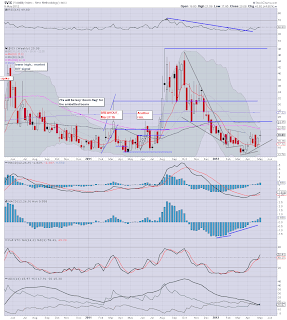 The VIX cycles are ALL bullish, although the strength of the trend is pretty weak. A VIX of 20% (VIX is actually quoted as a percentage) is still kinda low considering the equity market concerns in the near term, and also those for the long term health of the global economy.

It does not appear that the VIX can explode into the high 20s or 30s in this cycle. Todays black spinning top candle is potencially warning of a top, but VIX candles are not as reliable as index candles I've come to believe.

So, right now....market volatility IS increasing..but at a pace that is not exactly warning of any 'major market terror' any time soon. If my H/S formation theory is correct - and the indexes stay in a range of 1340-1390 into opex, then VIX can drop a little...and then the next VIX up cycle can perhaps begin as early as late next week.
Posted by Permabear Doomster at 22:30:00
Email ThisBlogThis!Share to TwitterShare to FacebookShare to Pinterest

After a somewhat scary opening for the bulls, we saw another strong recovery with a few indexes even going green in the afternoon. Despite the renewed weakness in the closing 90 minutes, the market appears like it is putting in at least a short term 5-7 trading day floor of sp'1343 - forming the RS, as part of the H/S formation I have been outlining. 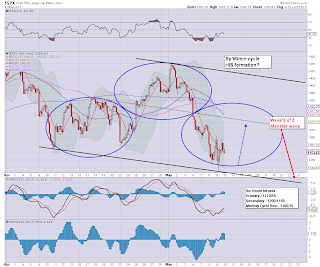 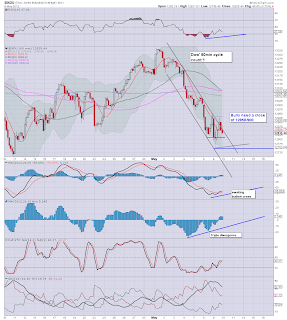 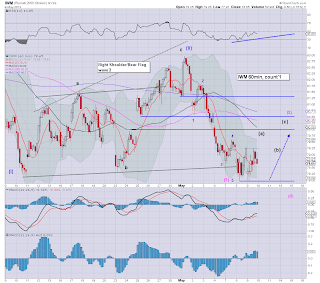 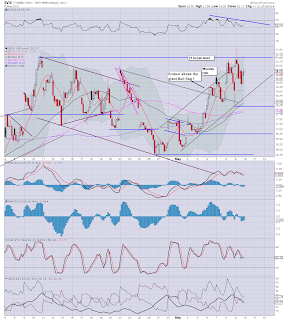 The closing 10 minutes were certainly weak, and clearly many of the 'rats' were not happy to hold overnight. That leaves us with the issue in that today was indeed a further lower low, and now we have to wonder if teh big 1340 support level can be taken out in this current down cycle.

Considering the 60min index cycles - with triple MACD divergence - that was confirmed today, I'd guess we will hold above the sp'1343 low from this morning.

More later, dealing with those daily cycles
Posted by Permabear Doomster at 21:08:00
Email ThisBlogThis!Share to TwitterShare to FacebookShare to Pinterest

3pm update - can we close now?

It feels like a long day, these early morning drops followed by the hyper ramps sure are mentally draining. I'd prefer close now..around sp'1360.There sure is a huge amount of chatter out there about Europe again. It seems we might be back to the 'rumour at 3pm' nonsense.

I actually exited earlier on the basis that the 15min cycle was looking rather toppy - and indeed its slipped back a little since my exit.

I am still looking for some moderate upside in the next few days - and the H/S theory suggest this RS will last into the end of next week. So...it could be a choppy tight trading range between sp'1355/85. 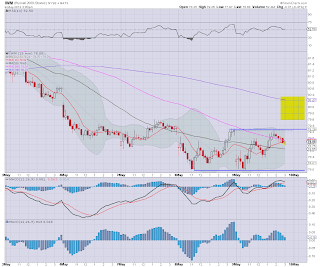 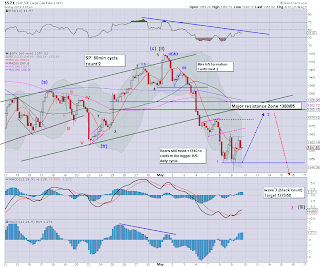 *VIX attempting to break/close above 20..a close over 21 would be a real victory for the bears.

As noted earlier, I have exited my long position, I'd rather be in cash ahead of the Bernanke. I'm taking the default 'safe' no-trade route.

More after the close
Posted by Permabear Doomster at 20:02:00
Email ThisBlogThis!Share to TwitterShare to FacebookShare to Pinterest

I intentionally got stopped out just earlier of my index long position. A minor gain, but still, considering the pretty dire open, I am pleased with such a nice turn around. I am however a little concerned about the Bernanke (9.30am EST) tomorrow, so I'm sitting it out until then. I may go long again early tomorrow, if the cycles look weak..but not too weak!

VIX remains weak, and as I type..the indexes are all going green. Those bears have got to be getting real mad now! 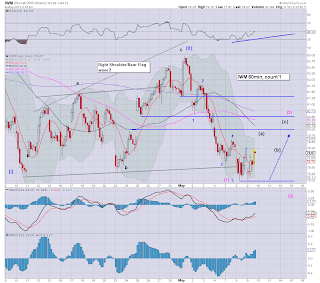 *special note, see how the IWM (Rus'2000), never did take out yesterdays low. That was one sign that the underlying minor wave'1 from yesterday WAS indeed complete. 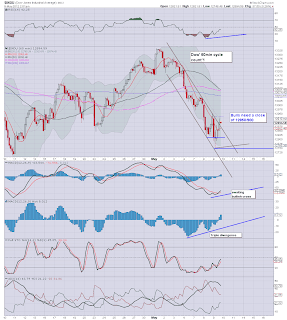 Bulls will want a close over that red 10MA !

Posted by Permabear Doomster at 19:02:00
Email ThisBlogThis!Share to TwitterShare to FacebookShare to Pinterest

1pm - it remains a chopfest

Hmm, a weak lunch hour for the market, but we are still considerably higher than the morning low of sp'1343. Again, its important to note we did make a lower low today, and that IS a bearish sigh. So..bulls need to put in a higher high above yesterdays close of 1363. Right now, that seems a little out of range. 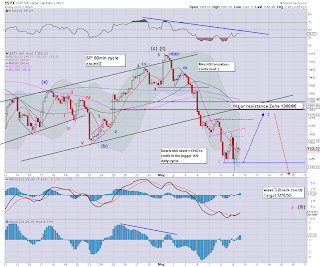 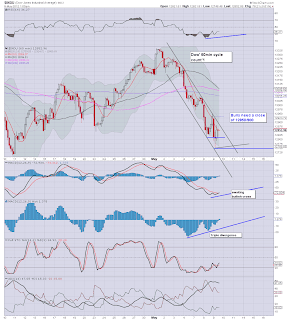 Bulls would most definately be seeking a close above the 10MA. They attained it yesterday, not that it helped for this mornings gap lower, but I'd still think its an important target.

Looking for further strength across the afternoon, and look for a weakening VIX.

yours...watching the movie 'The Hindenberg'  (yeah...kinda apt for a Permabear)
Posted by Permabear Doomster at 18:02:00
Email ThisBlogThis!Share to TwitterShare to FacebookShare to Pinterest

It sickens me to my stomach, but I am still holding long. This morning was obviously a really rough few hours for anyone long, and yet here we are again, seeing a pretty strong ramp - arguably even stronger than yesterday afternoon.

The VIX is getting smashed, we have triple divergence on the MACD cycle..and it looks like we'll soon attempt to take out yesterdays closing level. Even sp'1370/75 is not out of range today at the current rate of increase, although my best closing-level guess would be somewhere between 1360/65. 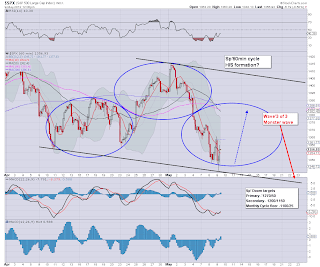 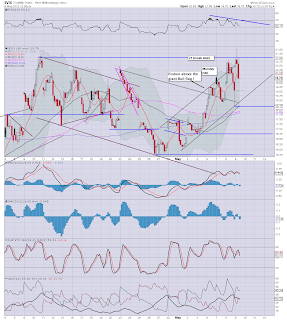 Stay tuned..more across the afternoon!
Posted by Permabear Doomster at 17:01:00
Email ThisBlogThis!Share to TwitterShare to FacebookShare to Pinterest

Yesterday probably annoyed a lot of traders, not least the late day ramp that would have kicked out a fair few of the bears. Today could be much the same, if we put in a morning low, and crawl back up across the day. The VIX breaking 21 is a warning to those currently long, but how we close today will be even more important.

As noted earlier, a key issue would be if we put in a lower low..and we have now done that across all indexes. Yet, on the MACD cycle we are putting in triple divergence..and it is still suggestive that an up cycle is due. 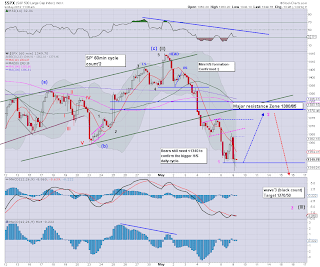 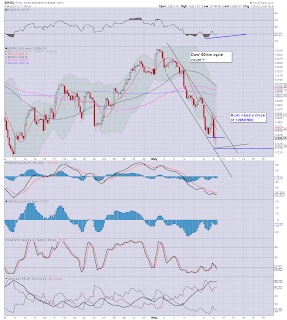 The dow is in a very tight down channel. Only a break above 12850..preferably 12900 would confirm at least a short term up cycle is underway. 12900 would also be above the important hourly 10MA. 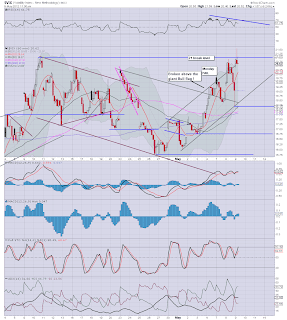 We appear to be putting in a floor, the VIX looks like its maxed out again. So, the question is..can be close relatively flat..or even green? From a pure cycle perspective....I'd still say..yes.

Time for an early lunch.
Posted by Permabear Doomster at 16:03:00
Email ThisBlogThis!Share to TwitterShare to FacebookShare to Pinterest

10am update - the thin blue line

The overnight futures weakness has held..and the open is indeed doing a full re-test of yesterdays low..which is so far holding..and we're seeing a bounce off it. The VIX put in a black doom candle earlier- a good sign of a fail (see Mondays opening too!) but the VIX is now challenging the 21 level. A break over 21 opens the door to 24. Whether we can go green by the close, very hard to say. Right now, I guess 1370/75 won't be possible until later tomorrow after the Bernanke has spoken. 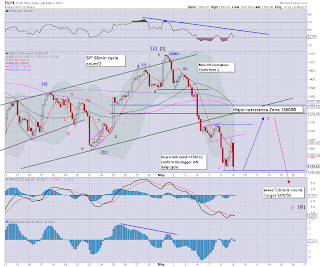 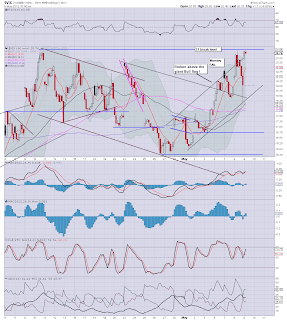 A long..and interesting day ahead.

So far the 1347 line is  holding..just. From a MACD cycle (blue bar histogram) perspective we are very low..and we should still cycle back upward.

*a reminder that the Bernanke speaks tomorrow...and we know the media might decide to attempt a hyper-ramp of this market with any hint of 'further monetary easing'.
Posted by Permabear Doomster at 15:03:00
Email ThisBlogThis!Share to TwitterShare to FacebookShare to Pinterest

Good morning. So far overnight futures have not put in a lower low...but its kinda a little too close for comfort.

Key issue today: can the market put in a higher low? So long as we don't break below yesterdays low of 1347, the market still appears likely to retrace up to around 1380/85. The Bernanke is speaking tomorrow, so maybe that will be the excuse for this market to again ramp upward after this mornings low is put in. 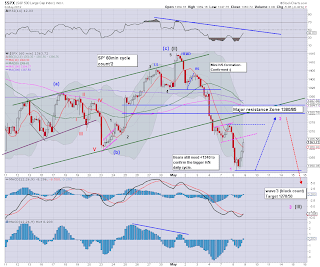 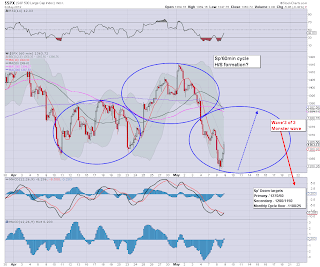 Best guess right now is that we'll put in a higher low, although it is kinda a close run issue right now.

The weekly and monthly cycles will continue to warn of a major down turn unless we break back above last weeks old support of sp'1395.

More throughout the day!
Posted by Permabear Doomster at 13:30:00
Email ThisBlogThis!Share to TwitterShare to FacebookShare to Pinterest

The Bigger Picture..and some Fib' levels

Whilst the main market looks set for at least a 1-2% bounce to around 1375/85/90...lets keep things in perspective - the BIG picture is showing the main market forming a very clear rounded top. 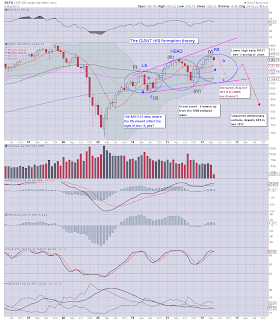 Everything is now in the early stage of rolling over. There can certainly be some chop at the top of a cycle -as we've seen in the past few weeks, but the main up trend since last October is arguably over, and we're now beginning what could be a huge move from the 1422 peak to around 1100. Yep, almost a full 30% lower.

To many, a repeat of both 2010 and 2011 looks too obvious, and thus 'it can't possible happen again'. Well, as they say in one of my favourite old shows 'All of this has happened before, and will happen again'.
--


To close the night...just a quick look at the Fib' levels on the sp'60min cycle 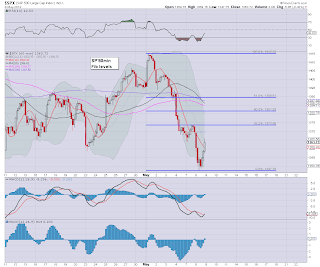 Considering the current cycle, we could easily hit 1373 early tomorrow, before the first minor pullback in this 'minor wave'2 UP'. I'd guess we do eventually move up to around the 1380/90 level in the next 3-5 days.

Posted by Permabear Doomster at 03:00:00
Email ThisBlogThis!Share to TwitterShare to FacebookShare to Pinterest

The market fell considerably today, the intra-day  low of 1347 certainly surprised many, but perhaps even more surprising was the late day ramp to close at 1363. A full 16pt turn around is pretty strong..and bodes for further upside early Wednesday and into the weekend. 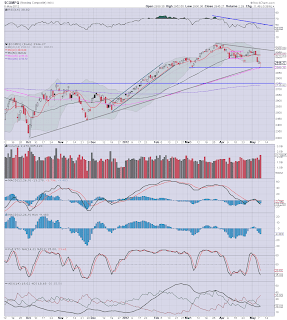 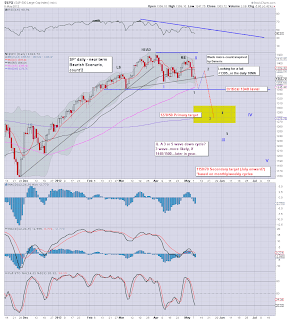 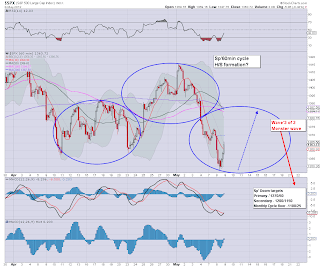 I again added the SP'60min, H/S formation chart, I think it will remain of prime importance across the next 5-7 trading days. If it is correct, I'm going to have a rather successful May and June.

From a cycle perspective, the MACD (blue bar histogram) on the daily cycles are still cruising lower of course, but if Wednesday closes green, we'll see a confirmed turn higher by the Thursday open - and that in itself would set up a 3-5 day up move. Right now, I'd guess we max out around 1385/95 around next Tuesday.

Maybe a little more..later this evening.