July - a disappointing month for the bears

With just one trading day left of the month, it has to be said, July was a very disappointing month for the bears. There were many (myself included) who were looking for a move to 1365 and then a swift fail. The target was indeed hit, and we did see a turn back lower, but we've seen subsequent further up waves, each putting in slightly higher highs.

In some ways the strength in July should not be too surprising though. After all, June closed extremely strongly, and we have indeed seen some follow though - although its only 1.7% 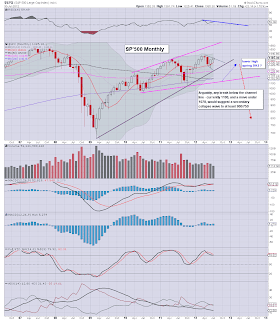 It does look like July will close at least marginally higher. I suppose if the market can close 10/15pts lower tomorrow (probably wishful thinking), that'd be something for the longer term bearish traders to help in looking forward to August.

We do have some econ-data in the morning, but the market will be firmly fixated on the FOMC meeting which begins tomorrow, with an announcement on Wednesday. I certainly don't expect QE to be announced, but they sure could overtly hint at it, and that might be enough for the market to resume the recent 2 day hyper-ramp.

One thing is for sure, Tuesday will be more dynamic than today was.

Bears need to see a break below sp'1325 (with VIX +21) to have any confidence right now, whilst the bulls merely need to consolidate sideways a little - after last weeks major turn higher.