Something for the Bulls to sleep on

To conclude today, lets just end with the SP' monthly, which remains my favourite to highlight. 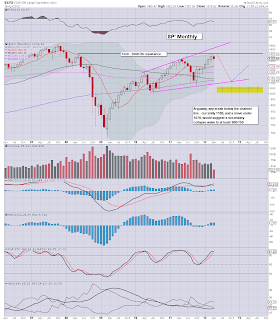 In both recent cases where we had a red candle after a 6+ month run, the market pulled back considerably. In 2010 we saw the May-July fall - which included the infamous flash-crash. Last year, we saw a very consistent decline spanning 6 months.

The best - and most obvious 'guess' right now, assuming we are starting a new multi-month down cycle, would be the lower channel, currently 1100, and which by early autumn will be around 1125. Such a target is some 20% lower, and would make for some very nice gains for those who could actively trade it from the short-side.