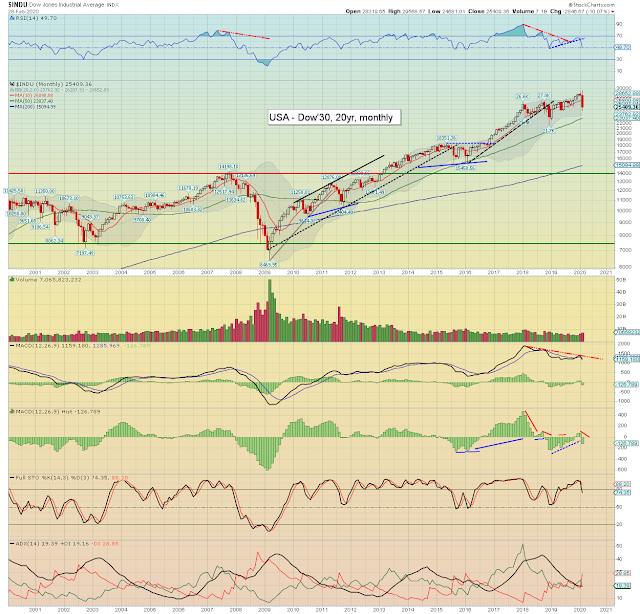 The mighty Dow broke a new historic high of 29568, but settled -2846pts (10.1%) to 25409. The February settlement was far below the 10MA, and made for a bearish monthly settlement. Whilst price saw a new historic high, the technical divergence that stretches back to early 2018 remains the case. So, a new high... but on weaker momentum, and it should be a concern to those bulls still seeking psy'30K.

The monthly candle is of the bearish engulfing type, and is higher suggestive of further downside across March. MACD (green bar histogram) cycle ticked lower, as momentum is now moderately negative. I would note the lower bollinger at 23762, 1647pts (6.5%) lower, which appears due to be hit within March. 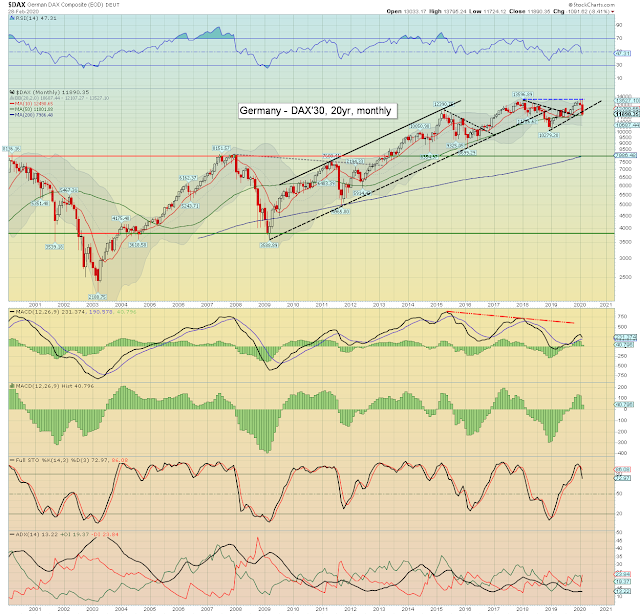 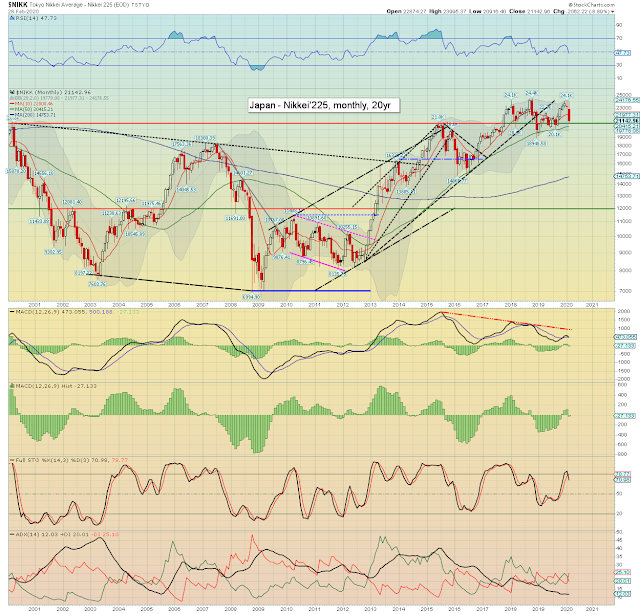 Japanese equities declined for a second consecutive month, settling -2062pts (8.9%) to 21142, notably under the 10MA. Momentum has turned negative. The February candle threatens some cooling to at least the lower bollinger in the 19700s. With all schools to be closed for March, there is increasing chatter that the Olympics will be cancelled. 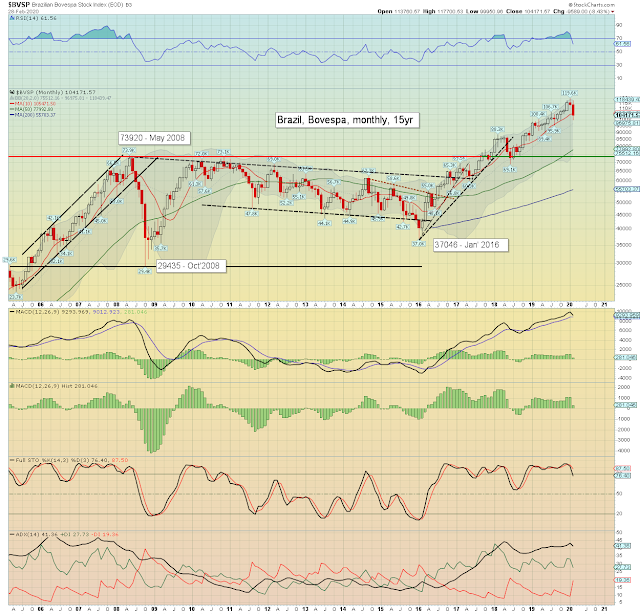 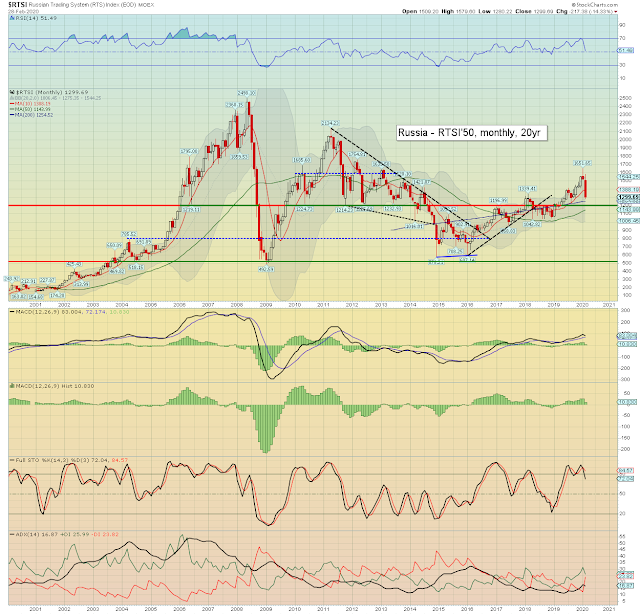 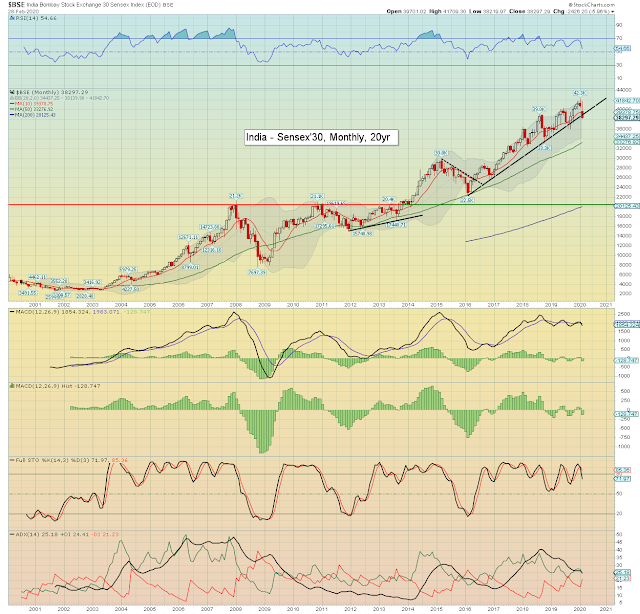 A second consecutive net monthly decline, settling -2426pts (6.0%) to 38297. We have a break of l/t rising trend from early 2016. Momentum has turned negative. Next support is in the 34000s... some 10% lower. I will just add that India remains my primary concern for the Corona virus. A significant outbreak would be devastating for a country whose populace (largely) lack basic sanitation and clean water. 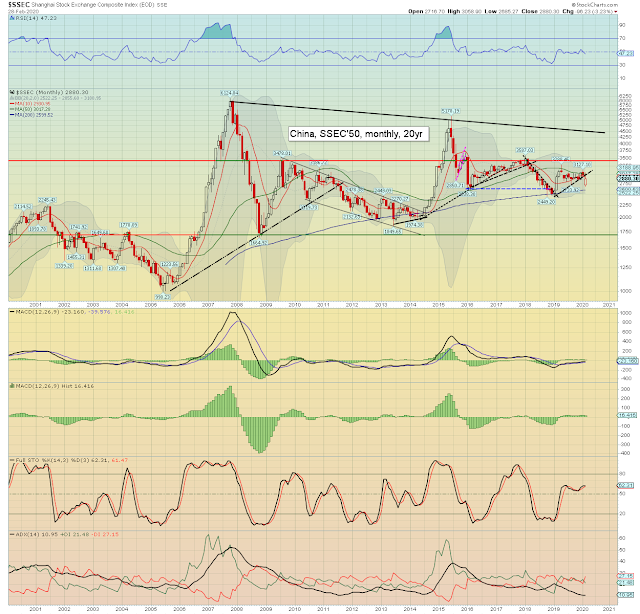 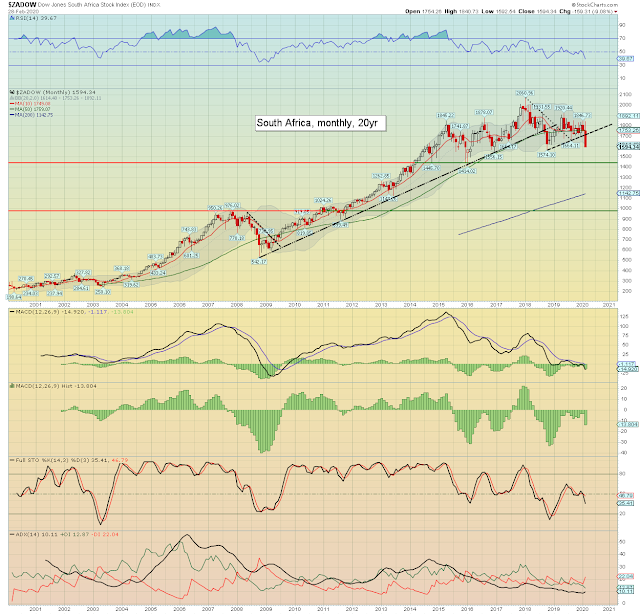 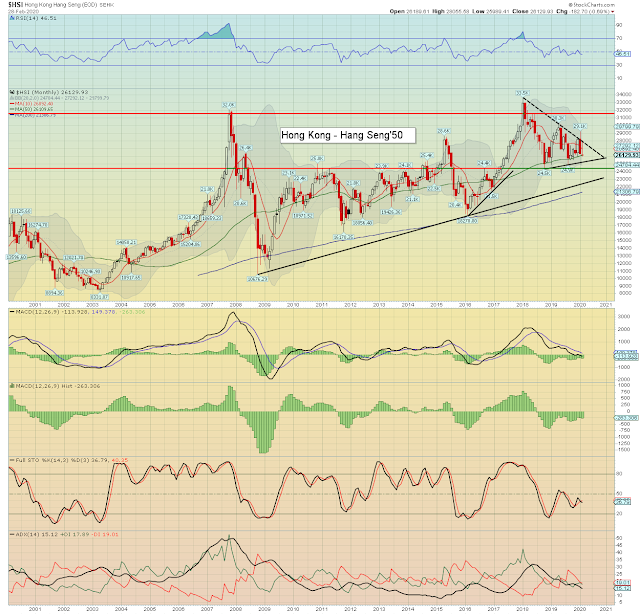 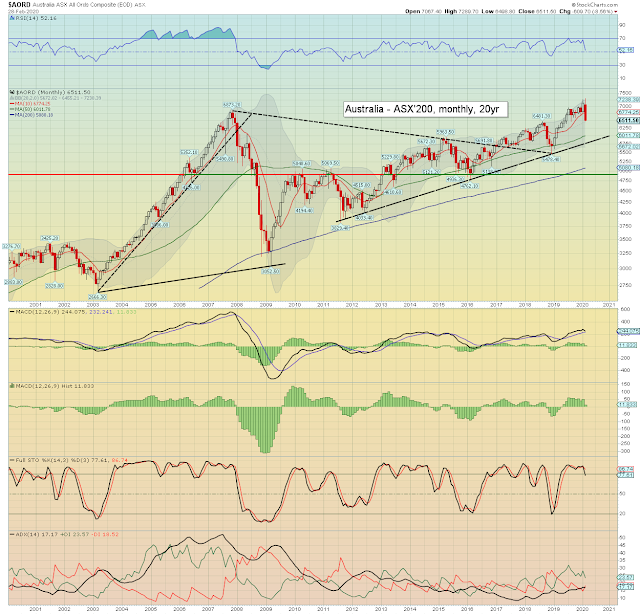 Australian equities broke a new historic high of 7289, but settled -609pts (8.6%) to 6511. I would note rising trend, which will offer first support of the 5800s in March. Much like the USA and Australian, the February candle is one hell of a powerful bearish engulfing candle, and is not to be dismissed lightly!
–

Russia and the USA lead the way lower, whilst Hong Kong was very resilient.

All ten world equity markets settled the month under their respective 10MA, and it leans bearish, at least for part of March.
-

I expect Sanders to do very well, and that won't please many within the financial world.

February was one of the wildest months we've ever seen for US equities. The monstrous reversal from new historic highs to severe declines, bodes very bearish for March.

To be clear, whilst we'll be cyclically inclined to start next week on a positive note, I'd still see Monday as day'8 of a collapse wave, one that can be expected to last 10/12 trading days.

The Fed and other central banks will take action in the coming days/weeks, but such measures will do nothing to re-open the Chinese factories, or cure Corona. Whilst it is impossible to ascertain how big a problem the virus might be, there will clearly be some degree of supply side problems. Further, consumer demand will be hit... at least for a quarter or two.

There is the matter of the bearish engulfing candle, where the February candle traded above the January high, but settling far... far below the January low.

The February candle is one of the most bearish, if not the most bearish ceiling/turn candles I've ever seen in three decades. The Feb' low of 24681 is below the key Oct' and Aug'2019 lows, and just 1pt above the June 2019 low.


Further, note the upper spike on the February candle, mirroring the January candle, which was also (overlooked by many) a month that actually settled red!

So, I'd dare suggest you go stare at the above chart for a good few minutes, and ask yourself... if February counts as month one down, when considering the magnitude of the February reversal, just how far down might we go?

Have a good weekend
--
*the next post on this page will likely appear 5pm EDT on Monday
Posted by Permabear Doomster at 16:39:00
Email ThisBlogThis!Share to TwitterShare to FacebookShare to Pinterest
Newer Posts Older Posts Home
Subscribe to: Posts (Atom)