The US equity market remains broadly strong, with indexes regularly breaking new historic highs. Near term outlook offers renewed upside to the sp'2450/60s, with the 2500s viable as early as late July. The year end target of 2683 remains on track. 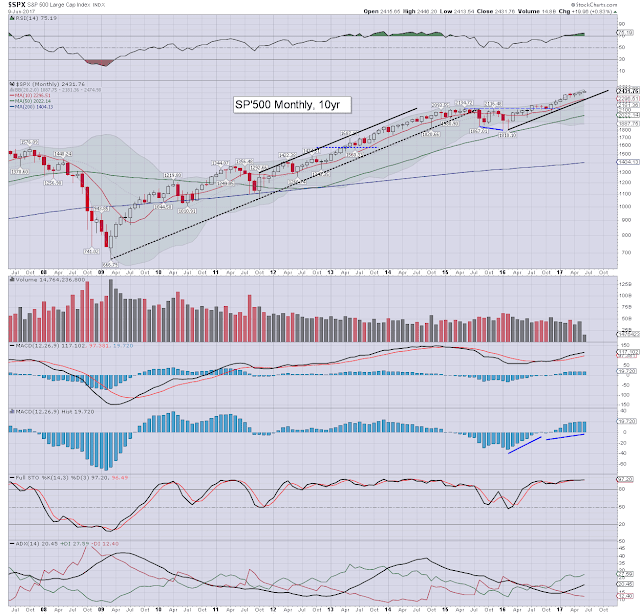 Friday saw the sp' print a new historic high of 2446. Underlying MACD (blue bar histogram) is on the high side, but there is zero sign of a turn. The key 10MA (and it is a massively important moving average) is currently at 2296, and is rising by around 25pts a month. By year end it will be around 2450. The upper monthly bollinger is in the 2470s, and will indeed be offering the 2500s in July.

Best guess: a touch of weakness ahead of the FOMC, but broadly, the sp'500 should be trading in the 2460/70s in July. The 2500s seem a given this summer. Sept/Oct' offers the only realistic opportunity for a retrace of 5-7%, before renewed upside all the way into spring 2018.

Equity bears have nothing to tout unless a break and monthly close under the key 10MA. Once the mid term rising trend from Feb'2016 is broken, the '5 wave' counters would have a valid reason to suggest the monstrous ramp from 2009 is complete. The grander target when the current rally is complete will be a back test of the double top of 2000/2007 in the sp'1500s.
-- 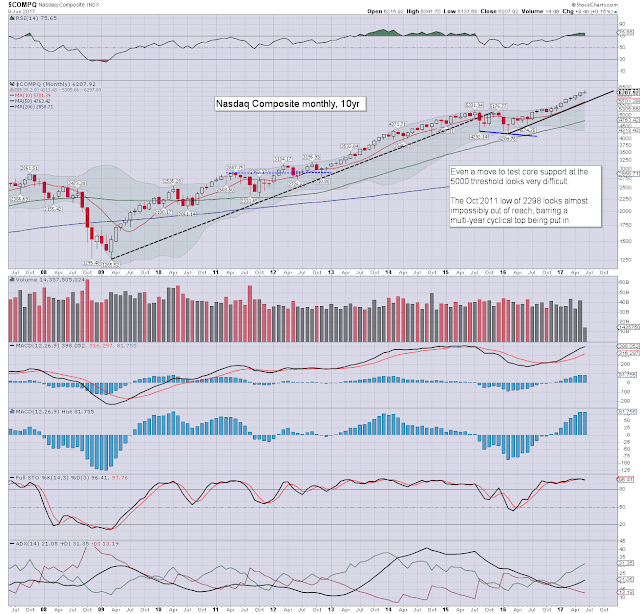 The Nasdaq printed a new historic high on Friday of 6341, which is a massive gain of 50.6% since the Feb'2016 low of 4209. Truly... incredible. Its notable that the Nasdaq is currently net higher for an eighth consecutive month, which is the best run in at least twenty years. The 7000s seem a given. Price structure in some individual stocks (CSCO and INTC for instance) are threatening basic Nasdaq upside to at least the 8250/8500 range.

How long until some people start to wonder that as 5K is core support, if you believe the next bear market will (again) be on the order of around 50%, the Nasdaq comp' has to climb to at least 10k, before it could fall 50%, without breaking below core support of 5K ? Dwell on that for a few minutes.

The key 10MA is in the 5700s, and unless that is broken, equity bears need to stay mute. 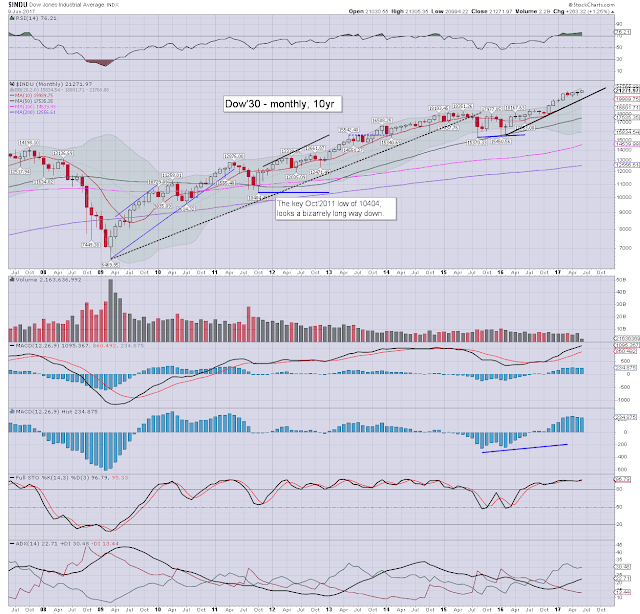 The mighty Dow saw a new historic high on Friday of 21305. Underlying MACD is a little below the momentum peak seen in April. For now though, zero sign of a turn, as the Dow is still generating new highs. First big support is the psy' level of 20k, and that looks secure this summer. 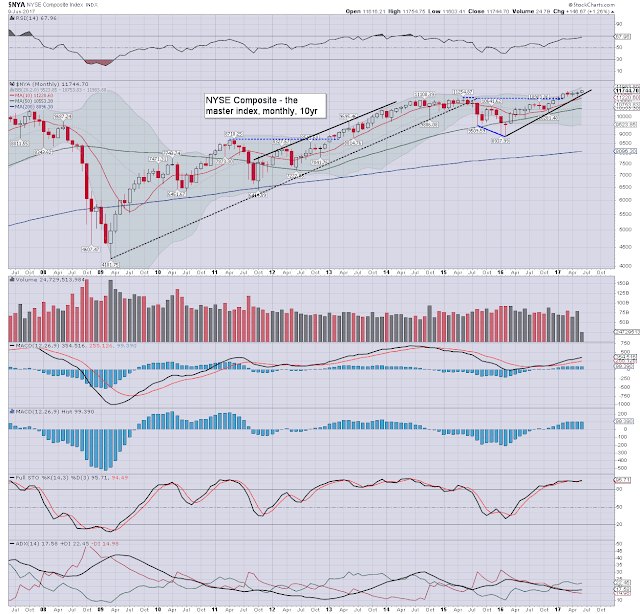 The master index saw a new historic high on Friday of 11754. Upper bollinger is effectively offering the 12k threshold in the near term. First big support is the 11200/10900 zone, which should hold across the summer. A year end close around 13k is a very realistic target. 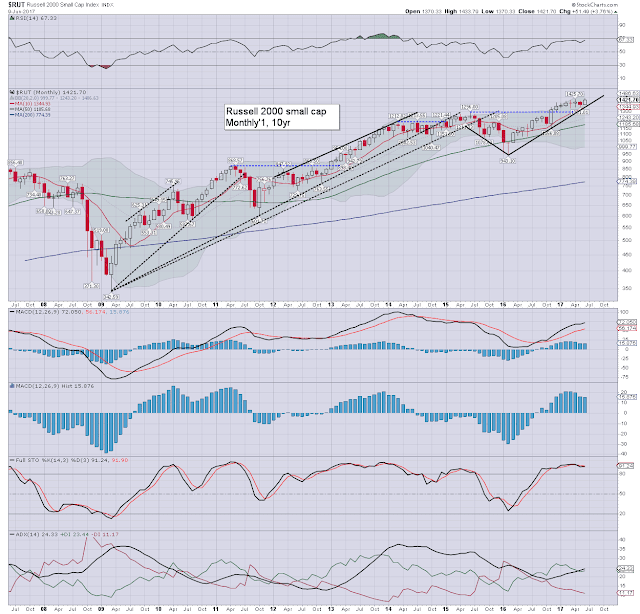 The R2K broke a new historic high on Friday of 1433. Upper bollinger will be offering the 1500s in July. I will again be provocative and suggest that perhaps some should consider the notion of 'R2K @ 2K' as not so crazy, before this has 'all played out'. 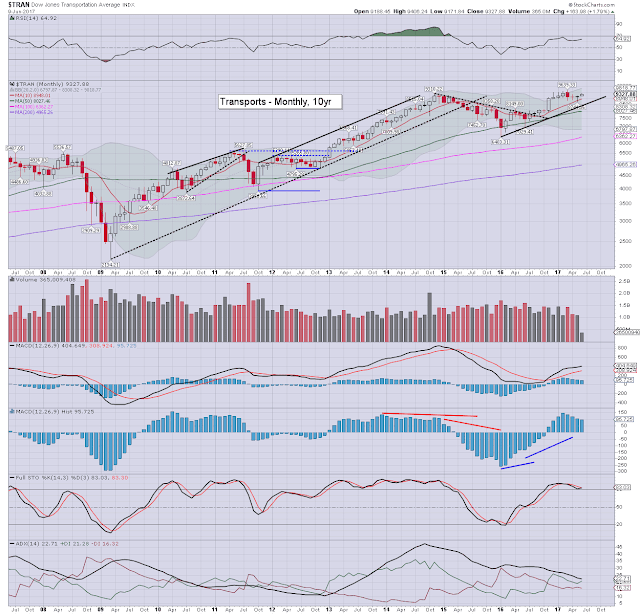 The 'old leader' remains the market laggard, which should be seen as somewhat odd, as energy/fuel prices remain historically low (at least relative to 2011-14). The key 10MA was violated in April, but not closed under. The March historic high of 9639 can be expected to be broken above this summer. The 'tranny @ 10k' is a valid target for the autumn. A year end close near 11k will be tough, but it would sync up with sp'2650/700 and Dow 23k.
--

The US market is regularly breaking new historic highs, with the Transports lagging.

There is simply zero sign of the mid term bullish trend - that began in early 2016, ending. Most indexes have around 5% of downside buffer before core rising trend is tested.
--

The week will likely centre on the FOMC.

The FOMC will issued a press release at 2pm. Most expect the second rate hike of the year, of 25bps to a new target range of 1.00-1.25%. There should also be some talk about (later this year) reducing the balance sheet. Yellen will host a press conf' at 2.30pm, and that will likely last an hour.