It was an exceptionally bearish start to the year for world equity markets, with net January declines ranging from -22.6% (China), -5.5% (USA - Dow), to -2.0% (Russia). Near term outlook offers threat of further upside into mid February, but with high probability of a crash wave in March. 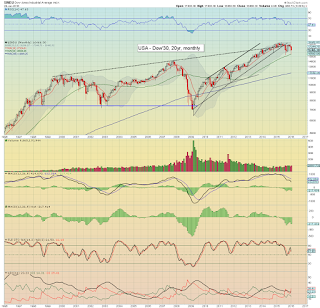 Underlying MACD (green bar histogram) cycle is now ticking lower again. At the current rate of decline, the MACD (black line) will cross below the zero threshold at the start of March. The last time the Dow saw that technical setup... Sept'2008.

Upside resistance of the monthly 10MA stands at 17324, but that will drop to around 17000 at the Feb' 1st open. On no reasonable basis can equity bulls expect the Dow to see sustained trading >17K until Aug/Sept' at the earliest. 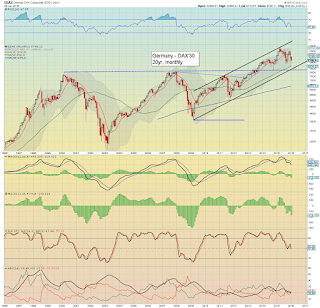 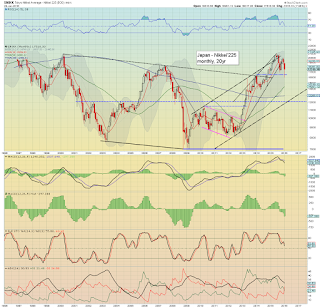 The BoJ fuelled Nikkei saw a January decline of -8.0% @ 17518, having seen a powerful bounce from the 16K threshold. Broadly, further weakness to at least 14K looks due. 12K is likely the 'best bear case' by April/May. 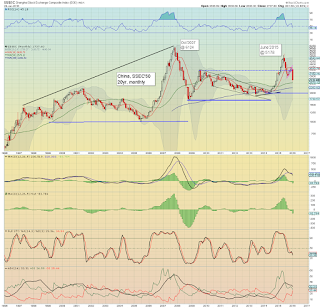 Despite various efforts by the communistic leadership, the Shanghai comp' saw a net monthly decline of -22.6%. Price structure across Aug-Dec'2015 was a very clear bear flag, and the January downside fully confirms it. Next support is around 2500, then 2K. 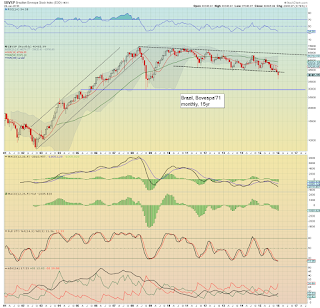 With commodities remaining broadly weak, the Bovespa declined for the third consecutive month, settling -6.8% @ 40405. Most notable, there was a clear break of support that stretches back to 2009. It would seem 30K will be hit, and right now that is a full 25% lower. 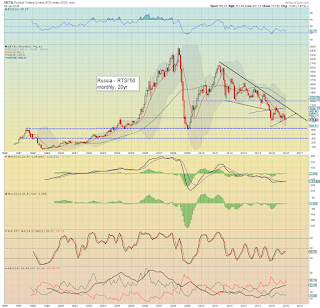 Despite weak energy prices, the Russian market was the most resilient market in January, net lower by just -2.0% @ 741. However, the broader trend remains dire, with next downside target of the Dec' 2014 low of 578. That looks likely to be broken, and then its a case of whether the RTSI floors this spring/early summer around 500, or more likely, the 400/300 zone.

It is a rarely mentioned issue, but what are the implications for Putin? Is the Russian President not under great pressure from some of the 'big money' in Russia? The Russian market is lower by a nightmarish -65% since April 2011. Had the sp'500 declined in a similar fashion, we'd now be trading at 478. 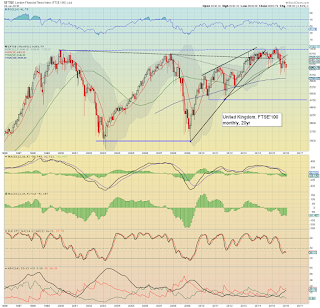 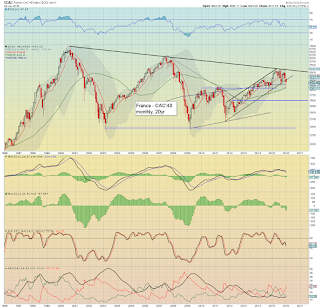 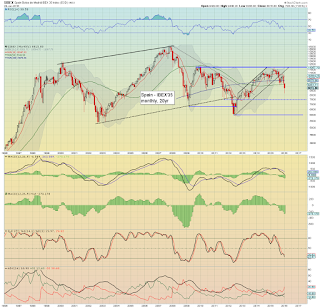 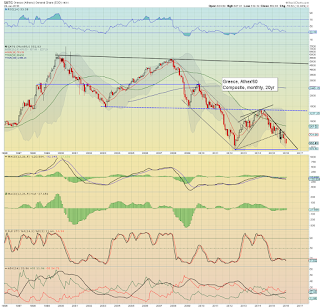 It was indeed an exceptionally bearish start to the year.

The December 2015 close was a bearish one - with even the US indexes closing under their respective monthly 10MAs. January has given FULL confirmation that the market is in at least a mid term downward trend.

Price structure on many of the monthly charts is highly suggestive that we're now headed much lower into the spring.

No doubt the central banks will try to stall/halt the declines - as the BoJ tried on Friday via NIRP. Yet... it won't likely be enough.

It would seem that once the current bounce maxes out by mid February, most indexes are set to fall around 20/25% in the next multi-week down wave.

It would seem prime time for the equity bears will be March.

*there are 3 fed officials on the loose, notably Fischer, 12pm Monday.