Chinese equities saw a relatively moderate Tuesday decline of -1.2% @ 3924, having briefly broken back above the 4K threshold. Near term outlook offers a further 5% retrace to the 3700s, before battling upward to the 4300/500 zone. From there, renewed powerful downside to the 3200/000 zone. 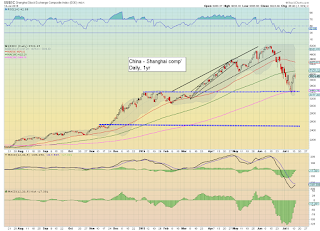 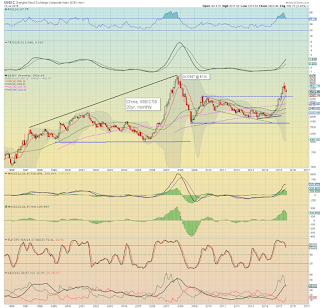 More than anything, it will be fascinating to see how the Chinese leadership react to another wave lower in August/September.

If the Shanghai comp' breaks the recent low of 3373, will they simply shut the entire market for a week or two? One thing is for sure... it remains one of the more dynamic markets to watch for 'entertainment purposes'.

Wednesday will be busy... not least with Fed chair Yellen set to address the US House Financial Services Committee. That will begin at 10am.. and probably last until around 1pm. There will be the usual blanket coverage across clown finance TV.

I am a major fan of the company, but from a pure technical perspective, INTC is in real trouble. 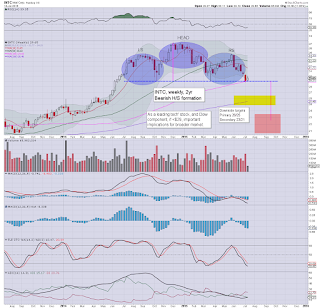 A move to the 26/25s appears due between now and early October. Ideally, the H/S formation is suggestive of $22.50... but I realise that is an extremely long way down.

*I exited INTC-long this morning from $29.90. Price action is increasingly bearish.. and if there is sustained action <29.30 tomorrow, it would be suggestive of a gap down to the $26/25s at the Thursday open - post earnings.

As it is... considering the broader market... if I had to take a trade.. I would still go long.... but I consider that overly risky. Instead, I will probably sit on the sidelines, and merely seek to short INTC in the $31.75/32.00 zone in early August.. if it gets there.

In any case... it does look like it will be possible to pick up INTC in the mid... or low 20s by early October.