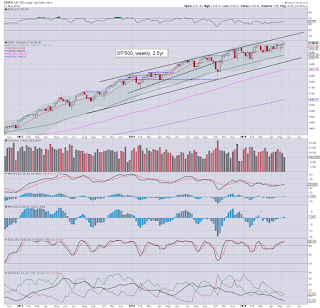 A net weekly gain for the sp'500 - and most other indexes, looks due. It would make for the third consecutive positive week, and it remains probable that we'll be trading in the 2170s by the next FOMC of June 17th.

--
Doomer rant on the banks currency rigging from Hunter

(I've no idea why anyone would not look at the core, rather than take out food/energy).

... now its a case of what the Yellen has to say this afternoon.

re: BBRY... it'd seem the gains is because of an announced 12 million share buy back.

No doubt, Denniger will be jumping up and down with that news.

*hey, deflationland, if you're out there... HELLO, and I hope you're not short BBRY.

Many of these share buy backs are set to last into 2017 (GE is a prime example)... and it remains a primary reason why equity bears should broadly just stay away for another two years.


8.55am. USD has seen a major swing, now +0.5% in the DXY 95.70s. If we can see the 96s... metals and Oil will be weak into the weekly close.
Posted by Permabear Doomster at 13:01:00
Email ThisBlogThis!Share to TwitterShare to FacebookShare to Pinterest
Newer Post Older Post Home