Volatility battles into the teens

With US equities continuing to slip across the day, the VIX built rather significant gains, settling +13.0% @ 13.69. However, with the broader equity upward trend still intact, the VIX is set to remain within the 14/10 zone for some weeks to come. 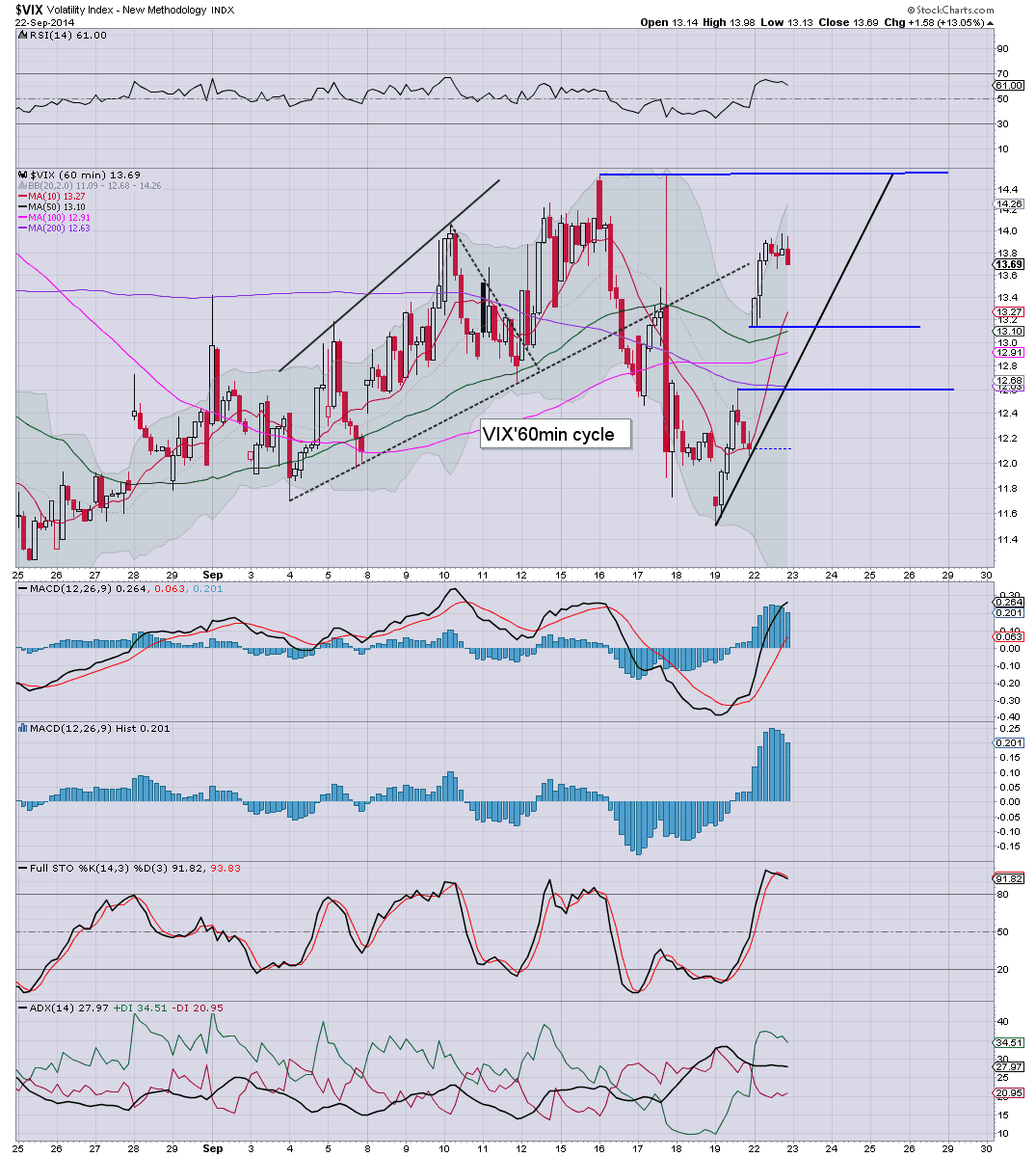 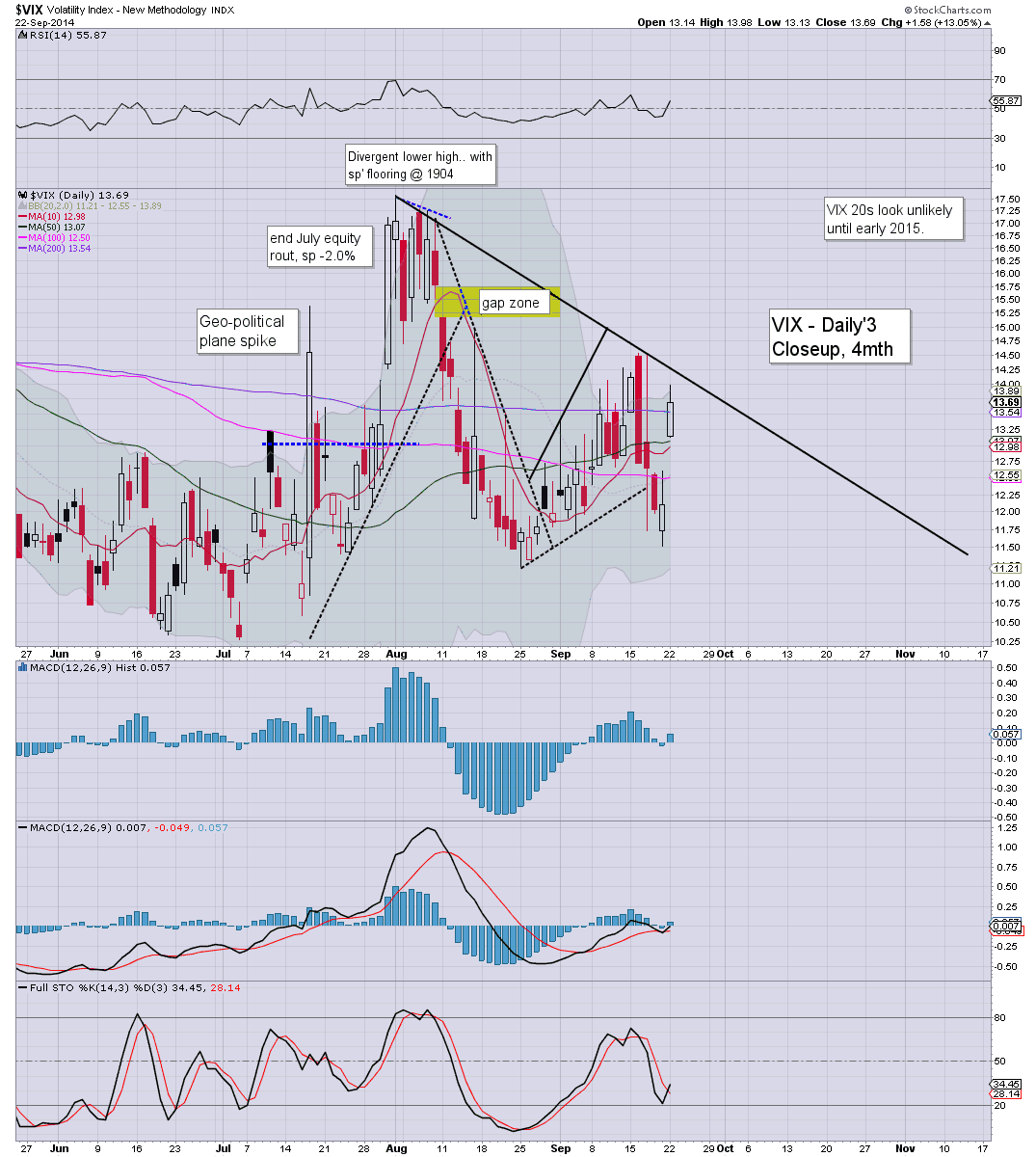 So... the VIX climbed.. but we're not even in the mid teens.

Equity bears need to be especially mindful to keep today's jump in volatility in perspective. The broader trend in the VIX continues to be a series of lower spike-highs.
- 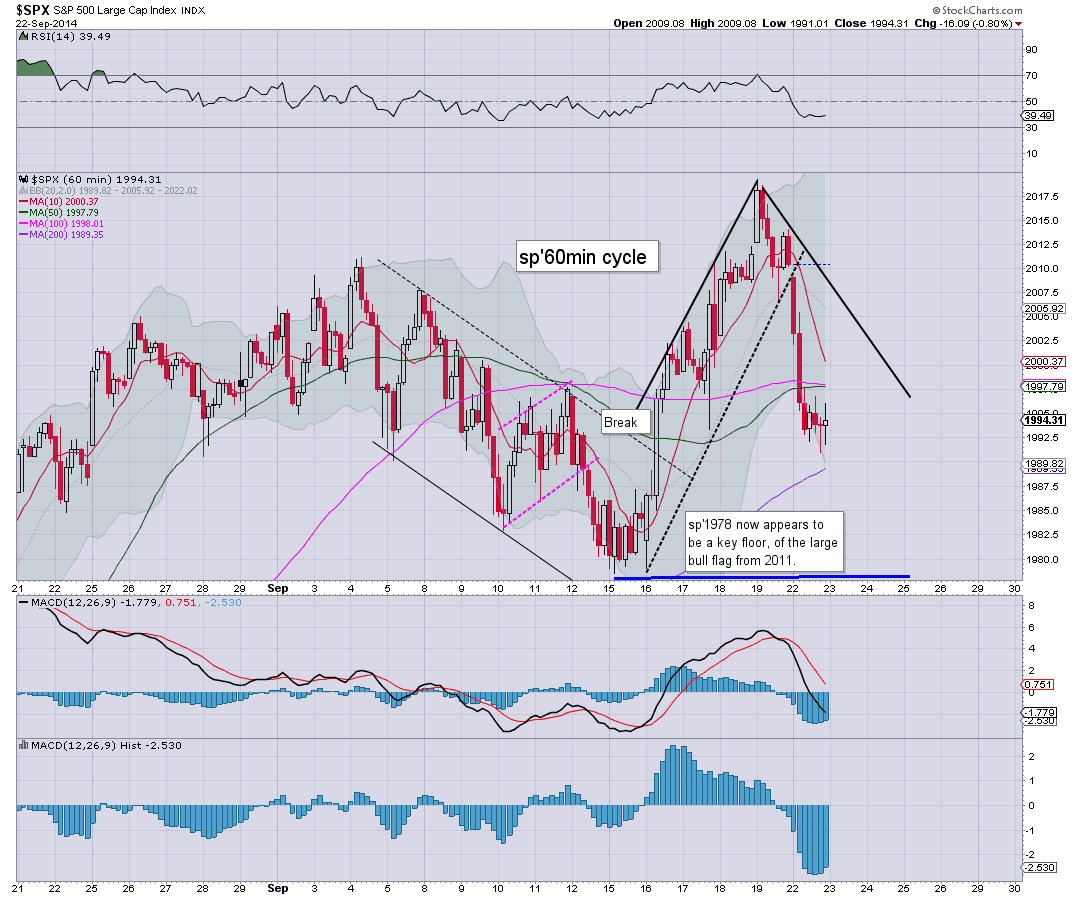 A somewhat tiresome start to the week, not least for those who were holding long across the weekend.

Certainly, paired with the Friday drop, this is the biggest 2 day decline since early August. Yet.. in the scheme of things... since we were breaking new historic highs a mere one trading day ago, equity bears really need to keep things in perspective.

The broader trend remains to the upside.
--

For the Volcano doomers out there, just found a new live stream...


--
Posted by Permabear Doomster at 21:03:00
Email ThisBlogThis!Share to TwitterShare to FacebookShare to Pinterest

3pm update - another attempt to floor

US equities remain very weak, with significant declines of -1.2% and -1.4% for the Trans/R2K respectively. VIX is holding gains of around 14%, but is so far unable to attract interest into the 14s. 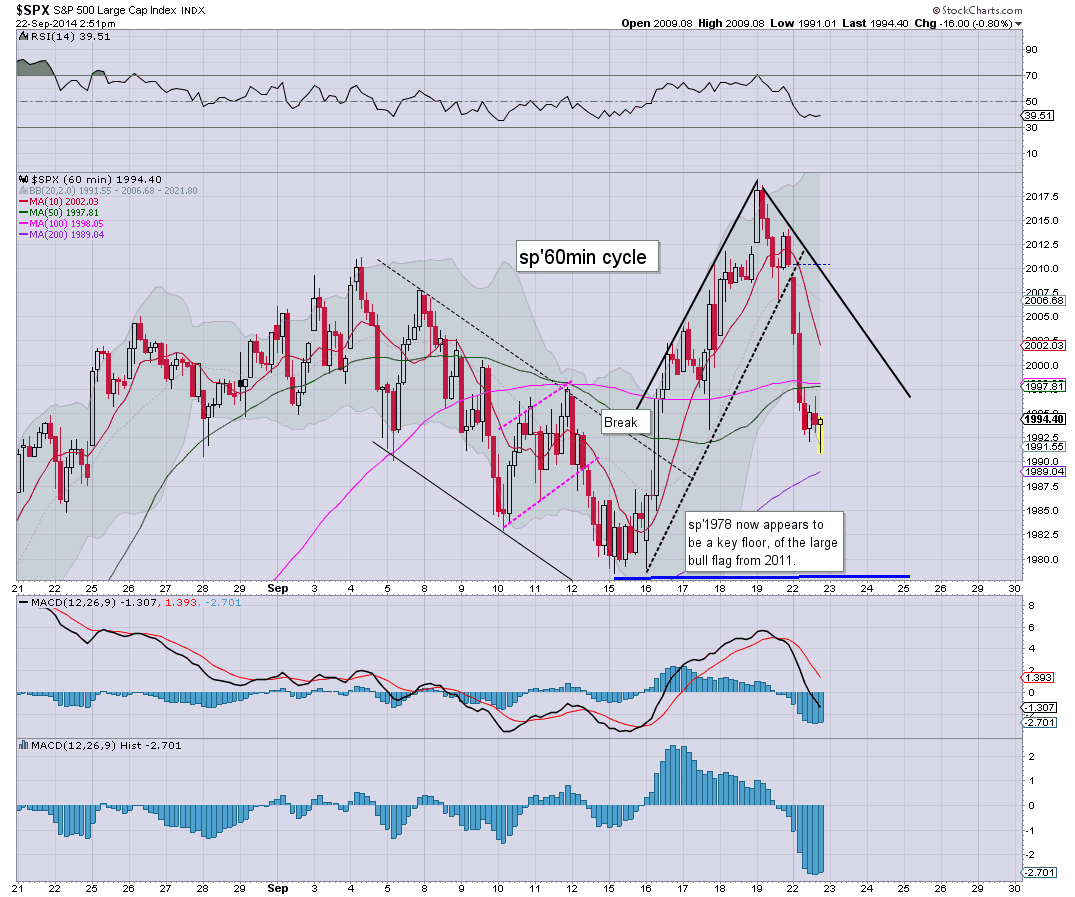 Clearly, another attempt at a floor is underway, with a somewhat spiky candle on the hourly chart.

--
Unquestionably though, today has been a day for the equity bears, especially in terms of the two market leaders - Trans/R2K, the latter of which has seen a death cross, and is getting some mainstream attention.

Overall, I can't take the declines that seriously.

updates into the close...


3.10pm.. Despite the metals largely flat.. .there is notable weakness in the miners. GDX -2.6%... absolutely dire on every cycle.

Coal miners are equally dire, with ACI, ANR, and WLT all now in the $2s... incredible.

Interesting to see how rattled the cheer leaders are on clown finance TV are today. One day down day after Friday's new highs.... they sure do get upset easily.

With $1.7bn of QE tomorrow... bears face the usual problem.

back at the close
Posted by Permabear Doomster at 19:51:00
Email ThisBlogThis!Share to TwitterShare to FacebookShare to Pinterest

US equities remain weak, and are significantly below the Friday morning high of sp'2019. No doubt, many of the weaker bulls got washed out today, and Mr Market has likely drawn in a few bear chasers on the downside. Regardless... primary trend remains UP. 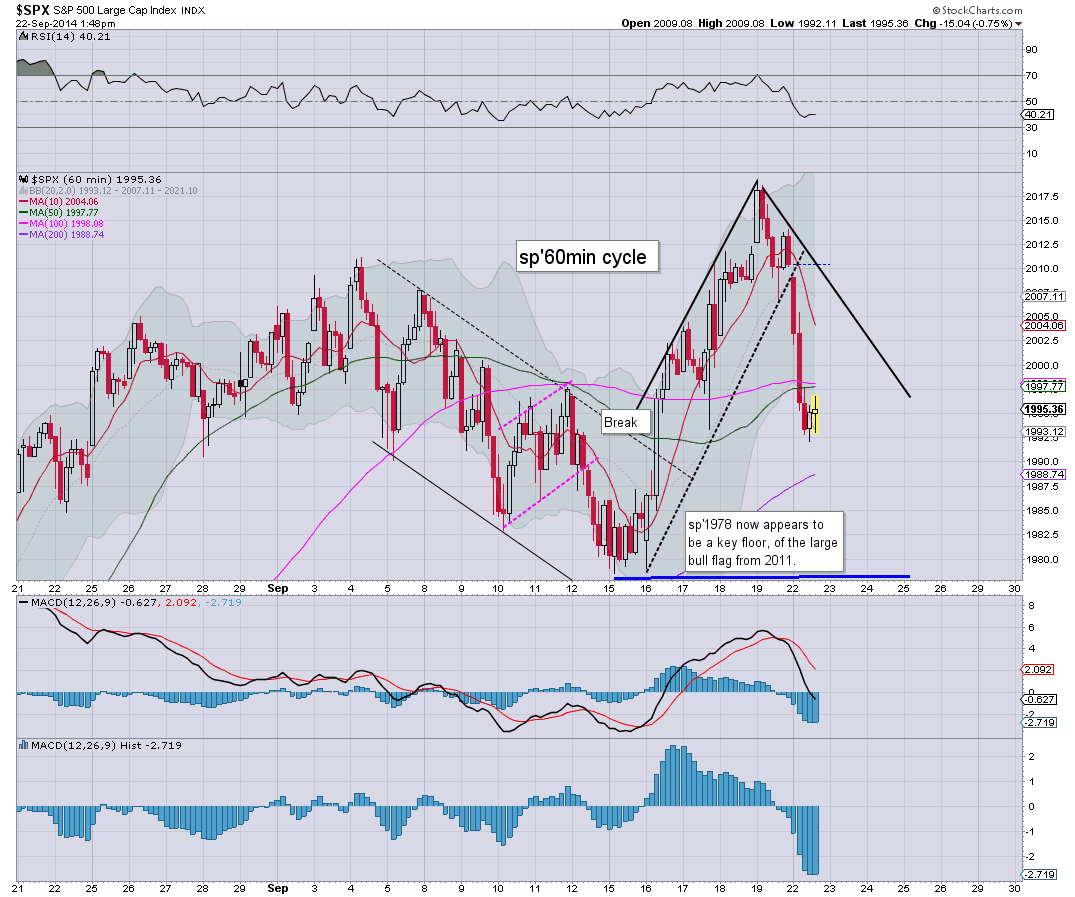 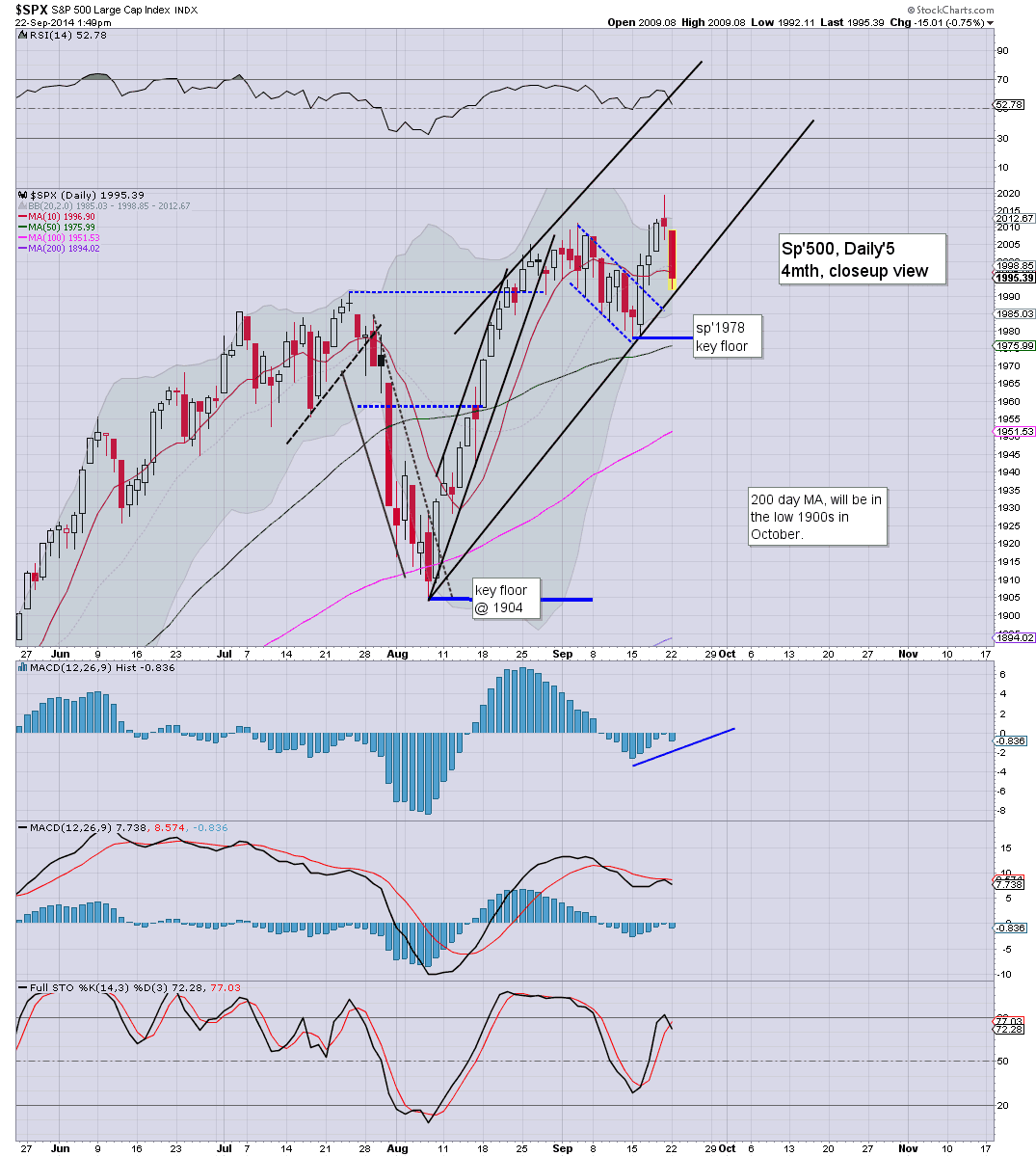 *another day closer to winter..and frankly its starting to get somewhat depressing. I remain trying to grab every hour of the remaining summer sun I can get...

All things considered, nothing has changed in the bigger picture, but I'm sure many (not least the maniacs on zerohedge) will be proclaiming the Alibaba IPO marked a key multi-year top.
-

I suppose some will be calling this a micro 5th lower, but whatever you want to call it, its not a great start to the week for those broadly long.
-
VIX +15%..making a push for the 14s
Posted by Permabear Doomster at 18:51:00
Email ThisBlogThis!Share to TwitterShare to FacebookShare to Pinterest

Equity bears have managed a surprisingly sharp down wave, the best since early August. VIX is reflecting this Monday mini-washout, +14%, but still only in the 13s. Even the mid teens look difficult to hit right now. 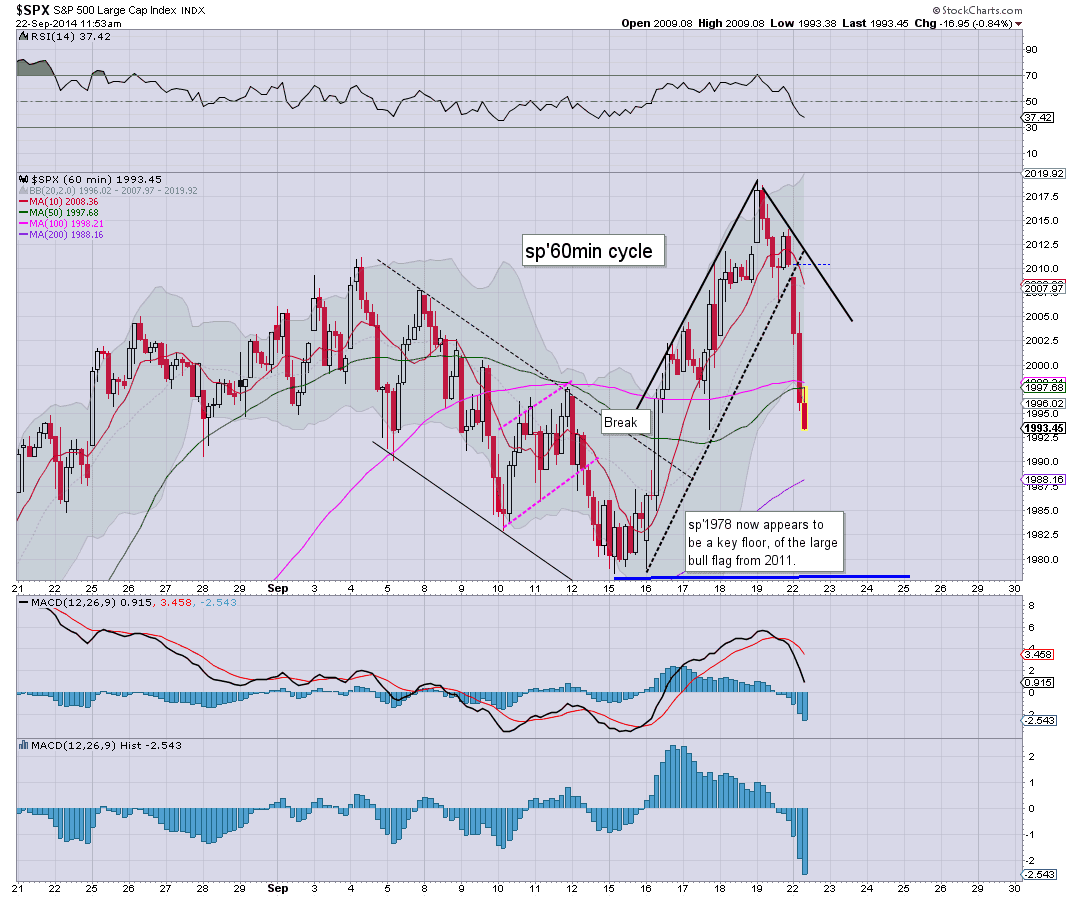 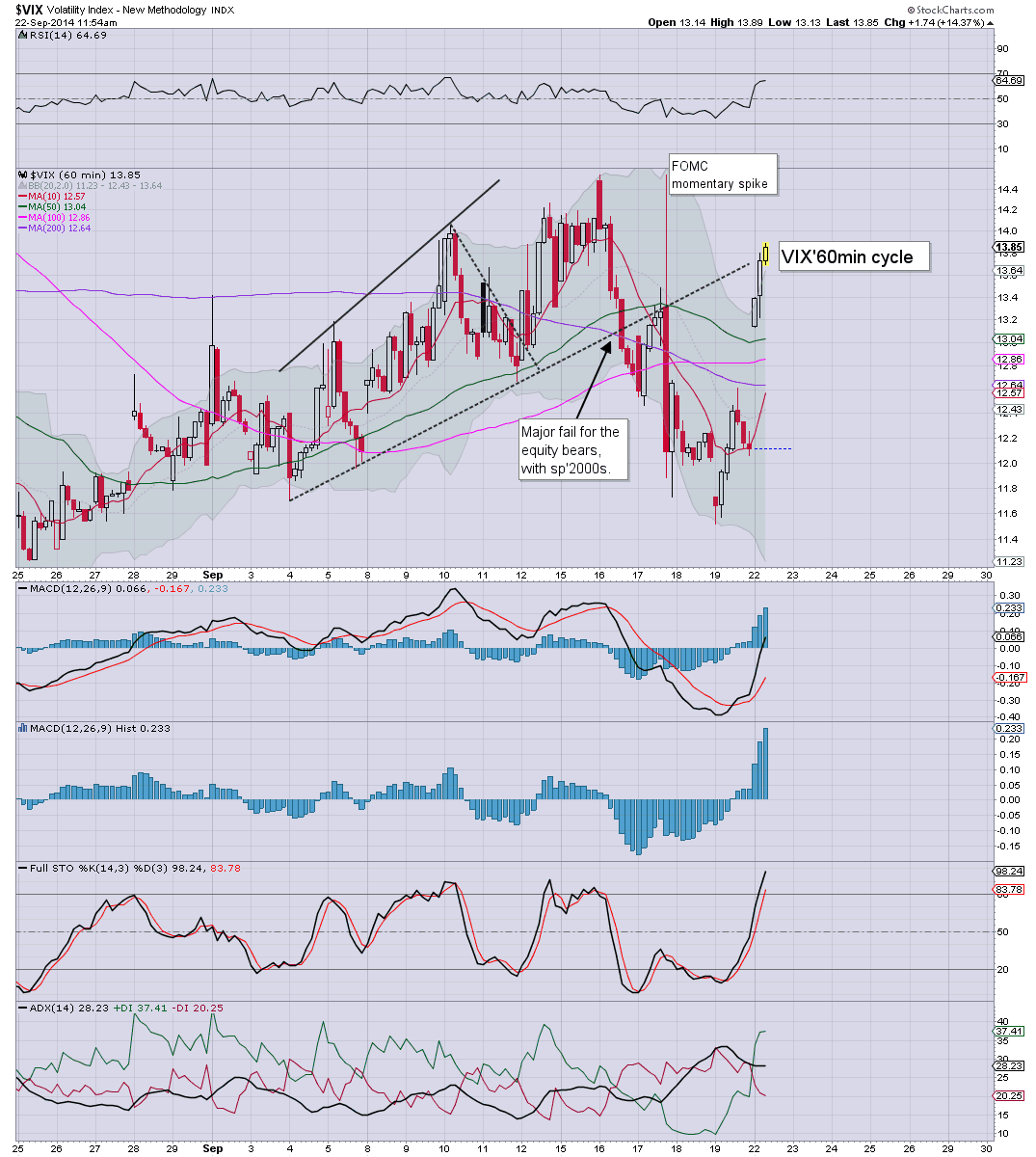 *clearly not enough weekend rest, I fell asleep in the past hour..hence the gap...
--

Those currently short, should at least be tightening stops to some degree.... after all... most could at least agree that the primary trend remains to the upside.

I hope those short across the weekend enjoyed today.. it is very likely the highlight of the week.
Posted by Permabear Doomster at 16:56:00
Email ThisBlogThis!Share to TwitterShare to FacebookShare to Pinterest

10am update - VIX jumps back into the teens 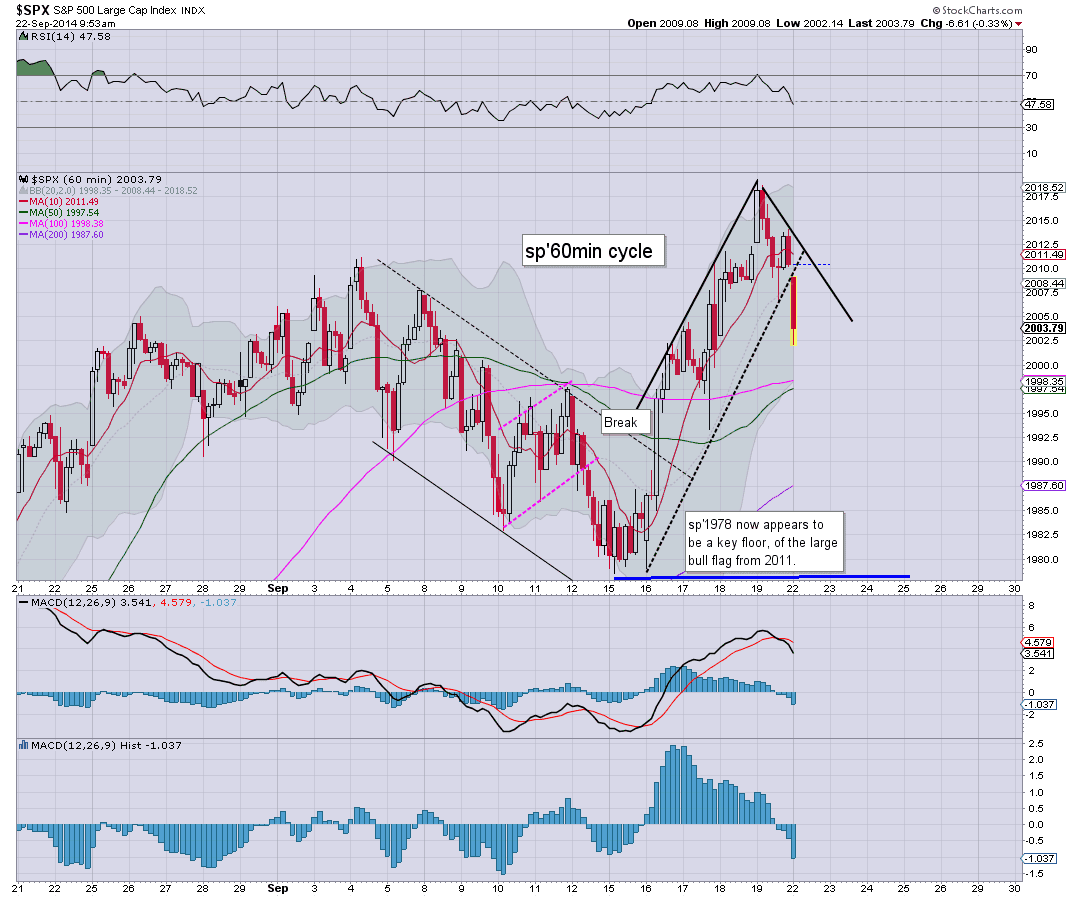 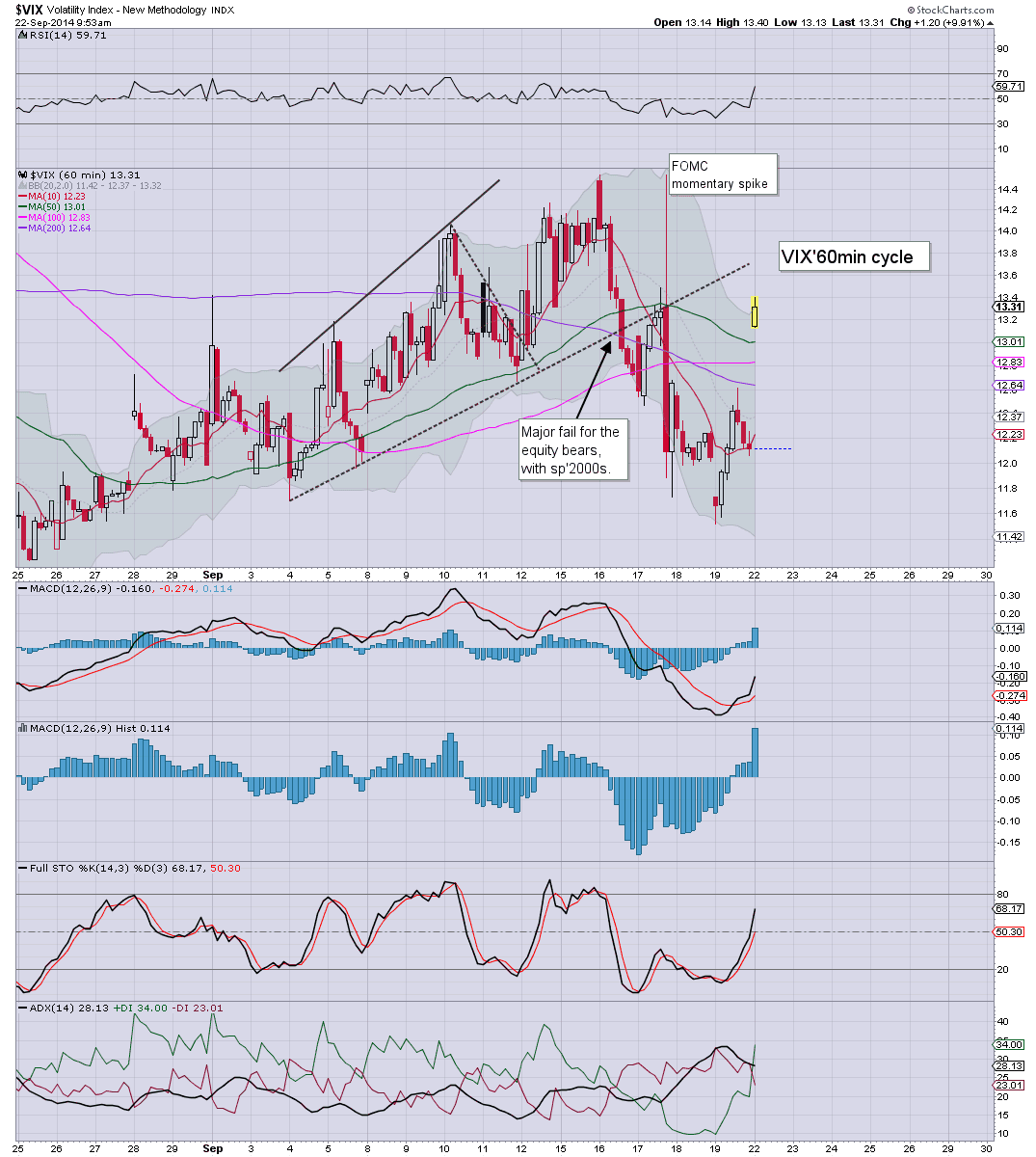 So...moderate declines to start the week.. but hey.. its a long day ahead..and there is little reason why we won't see at least some degree of latter day recovery.

-
*I remain long, (naturally underwater, urghh)... but seeking the sp'2030s as a primary target by end month.
Posted by Permabear Doomster at 14:55:00
Email ThisBlogThis!Share to TwitterShare to FacebookShare to Pinterest 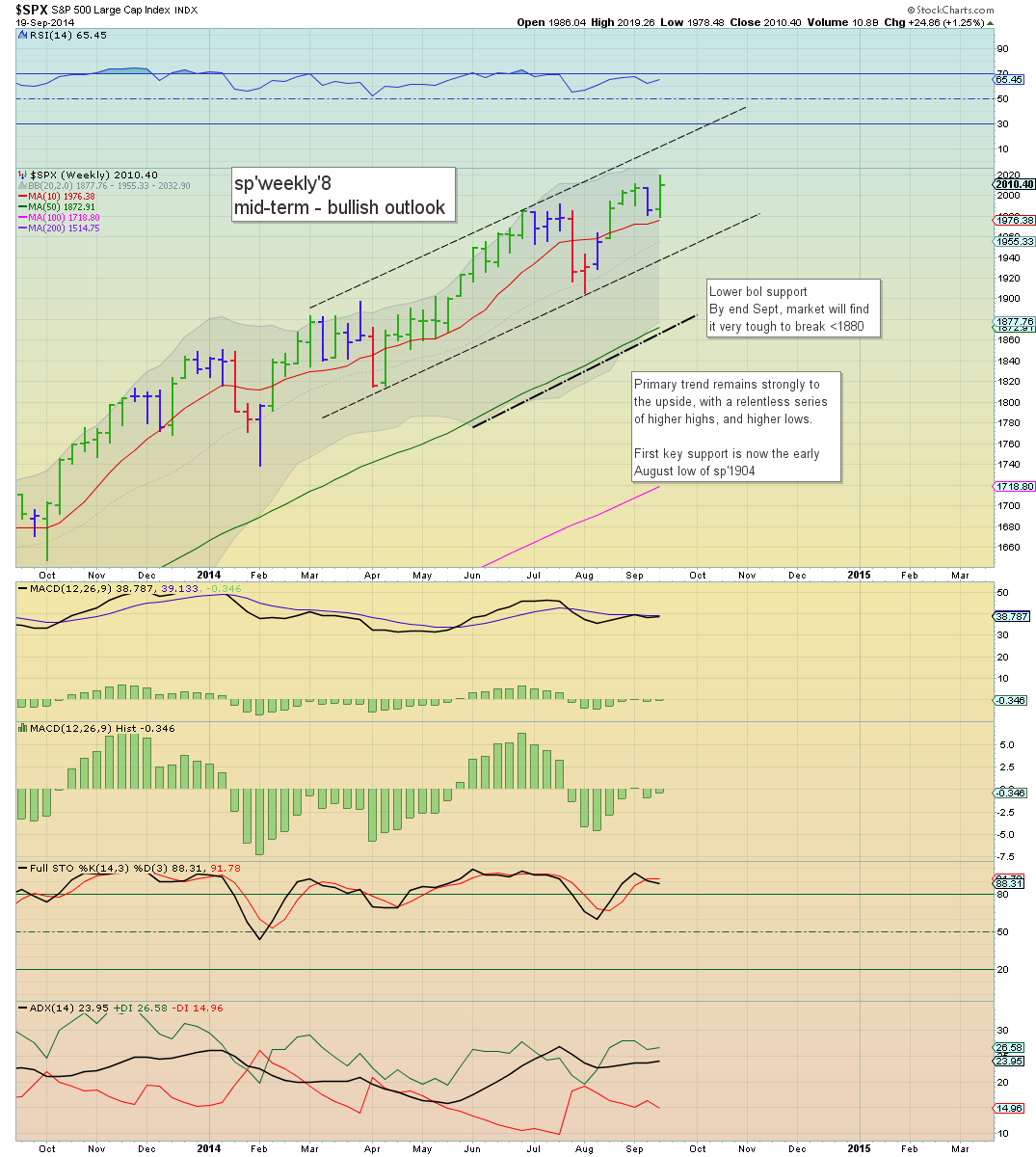 So, we're set to open lower, but well above the earlier overnight lows.

For some doomer chat to start the week...

Frankly, Morgan is almost as crazy as Organ (the latter of which was touting $200 silver by year end)... make of the above...what you will.
Posted by Permabear Doomster at 13:33:00
Email ThisBlogThis!Share to TwitterShare to FacebookShare to Pinterest
Newer Posts Older Posts Home
Subscribe to: Posts (Atom)