Having closed last Friday with moderate gains, the VIX started the week back on the slide.. settling -6.3% @ 12.32. Near term outlook is for the 11/10s... the only remaining issue is whether single digit VIX if sp'2000s. 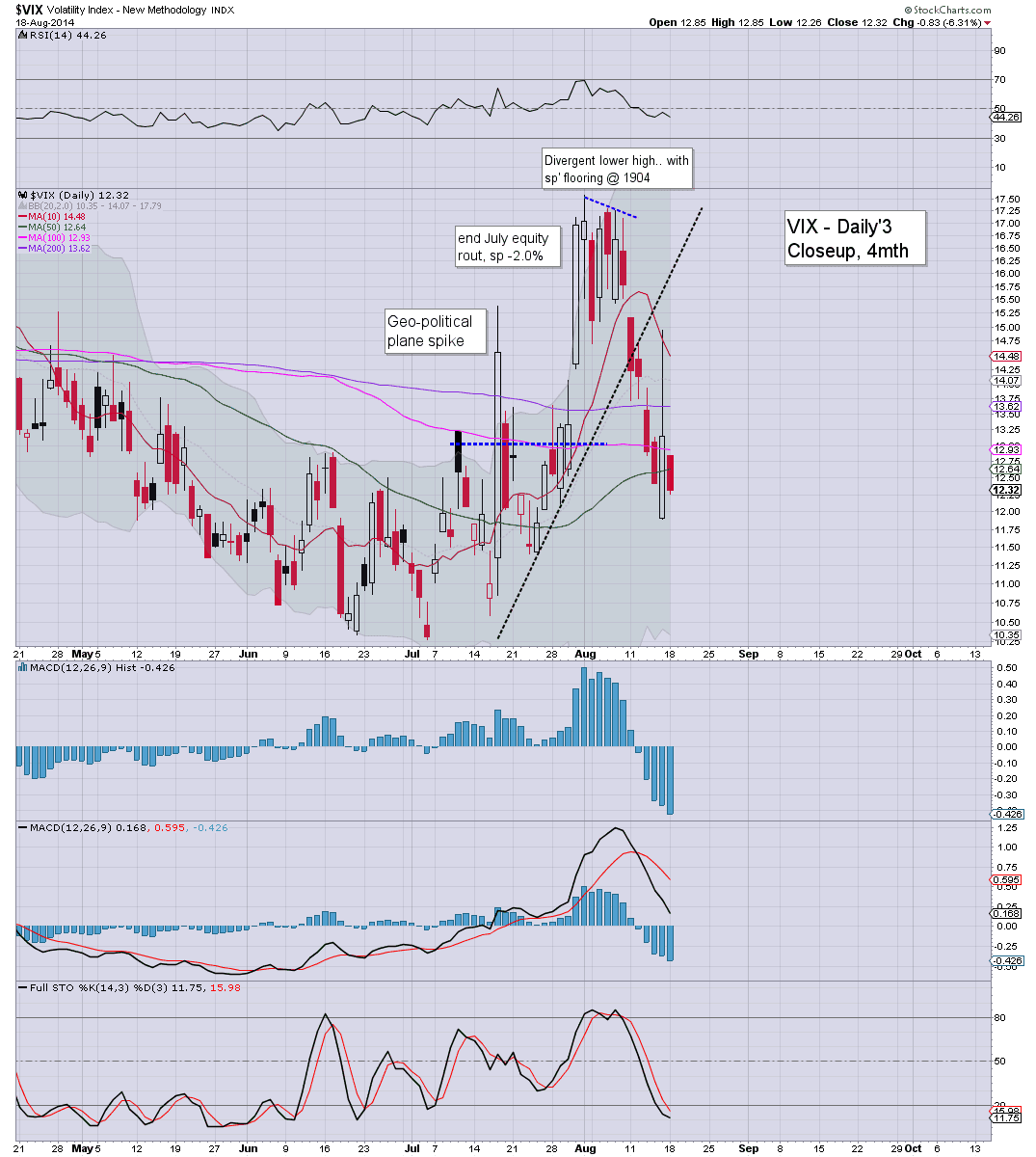 VIX looks set to remain subdued for some weeks, the big 20 threshold looks unlikely to be surpassed no earlier than October.

Daily MACD (blue bar histogram) cycle has not been this low since mid February... but it can easily remain at these low levels for some weeks.

Best case for equity bears this week, a gap fill in the VIX 15s, but that probably only equates to sp' in the mid 1950s... where the 50 day MA is lurking.
--
more later... on the indexes
Posted by Permabear Doomster at 23:00:00
Email ThisBlogThis!Share to TwitterShare to FacebookShare to Pinterest 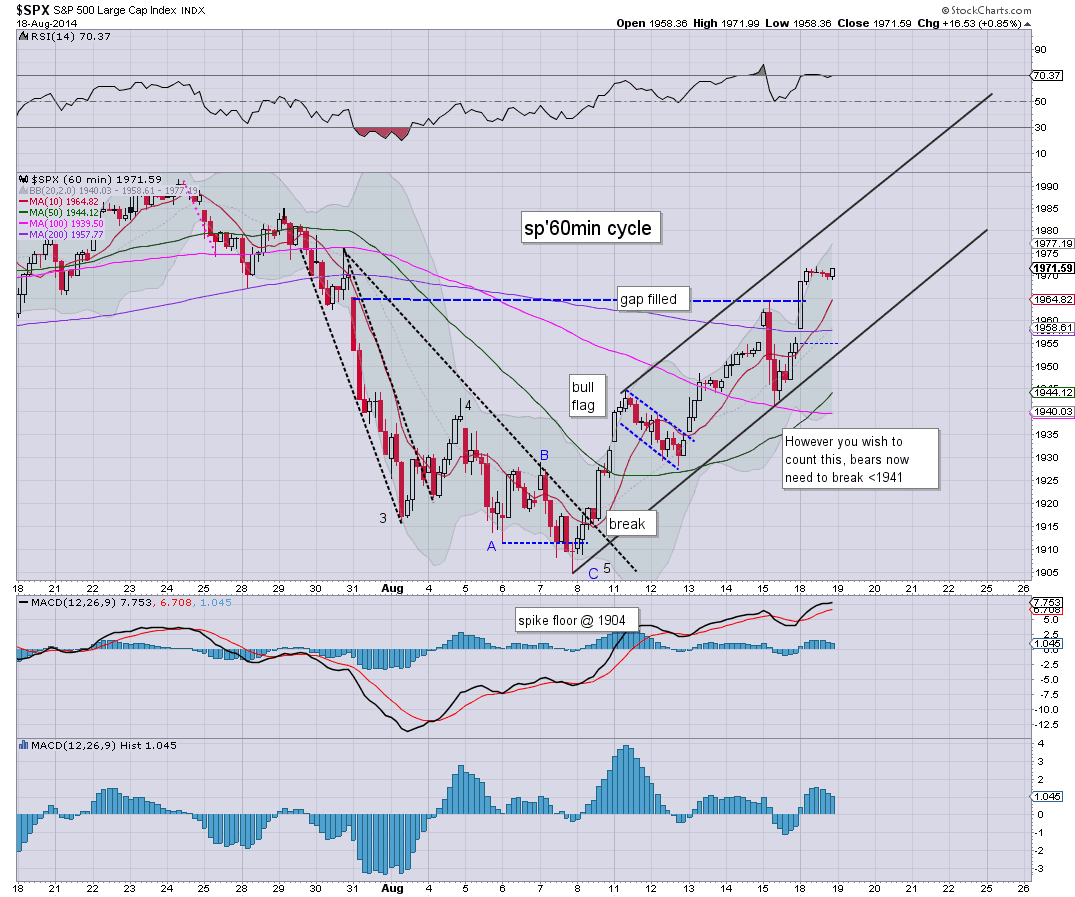 *I've largely 'cleansed' the hourly chart, right now, all I'm going to leave on there is a simple channel.
--

So...day'1 of the week was strongly in favour of the bull maniacs. The weekly cycles are confirming the turn from Aug'7th... and we're headed higher.

The brief drama from Friday morning is now a faded memory, and there is increasing consensus that we're headed into the sp'2000s.
--

*despite missing on some further gains, I'm more than content on the sidelines.. and have ZERO interest in any short side trades until at least mid/late September.

--
more later.. on the VIX
Posted by Permabear Doomster at 21:01:00
Email ThisBlogThis!Share to TwitterShare to FacebookShare to Pinterest

3pm update - another day for the bull maniacs

US indexes are set to close the day with significant gains for all the main indexes. The market continues a rather strong surge since the sp'1904 of Aug'7th. Metals remain weak, Gold -$5, whilst Oil is -1.4% 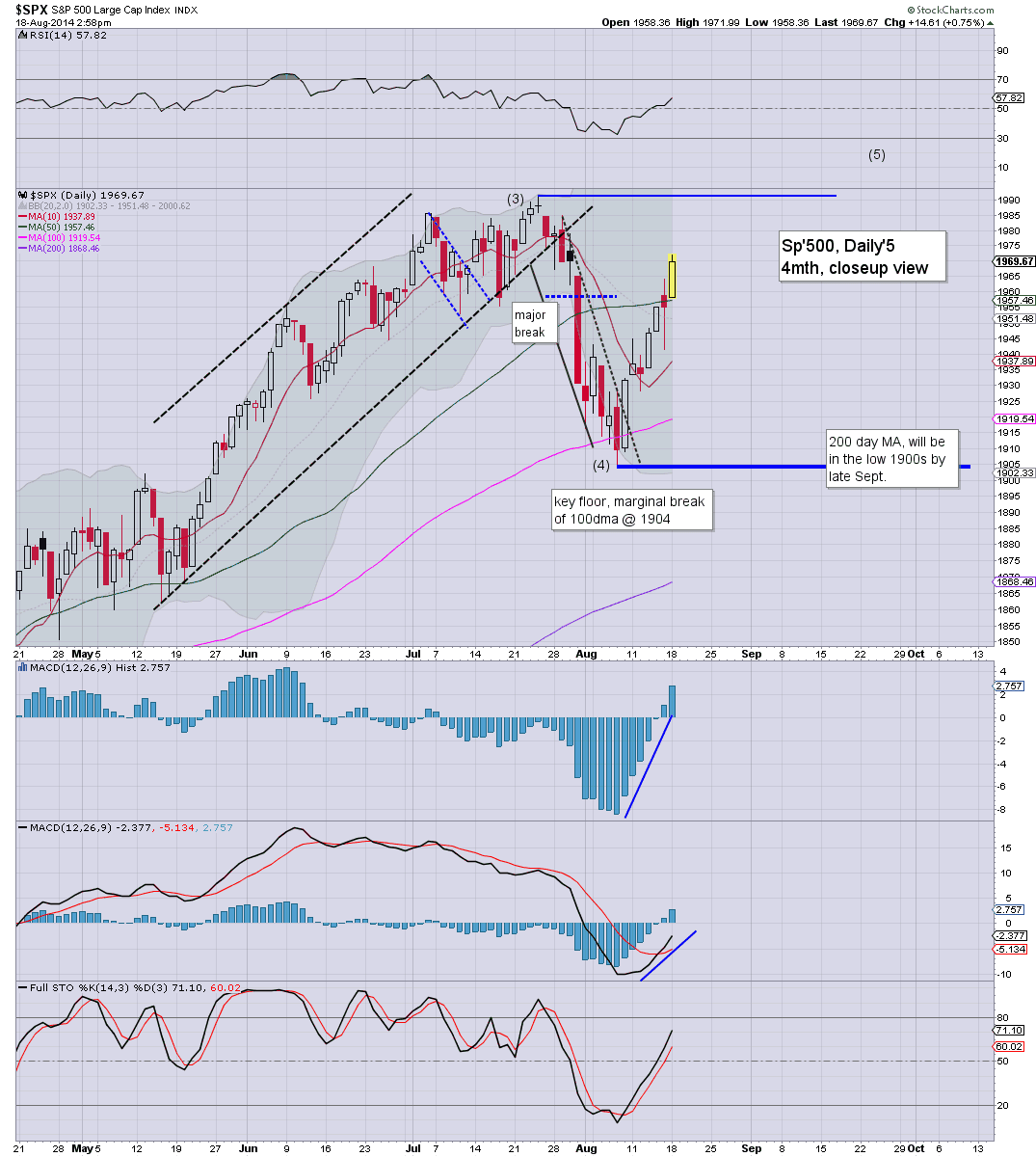 A somewhat tiresome day.. even though I didn't hit any buttons.

*last Friday's target of sp'1930s with 15s was a viable target for today, but hell, it is overly risky to be on the short side..and as noted at the time, I sure wasn't going to attempt any such trade.
--

Meanwhile...outside..its rainbows in London city.... as the sunset is near. 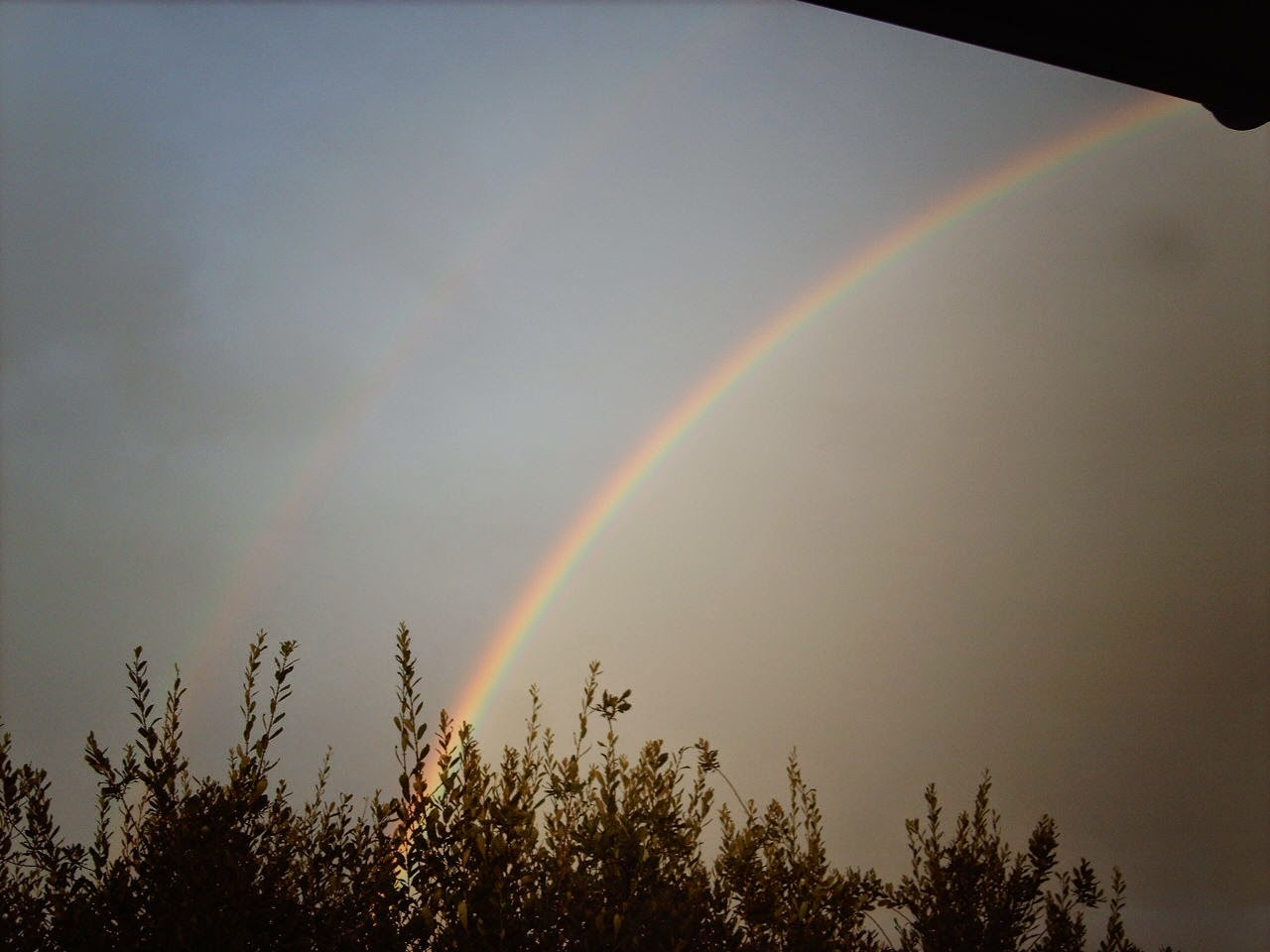 It remains amusing to see so many get overly wrapped up in the minor noise. All that time and effort....completely wasted on such minor moves.

As is almost always the case... overly risky to attempt to trade the smaller down waves.


3.47pm.. VIX in melt mode.. 11/10s likely... but more on that after the close.
Posted by Permabear Doomster at 19:59:00
Email ThisBlogThis!Share to TwitterShare to FacebookShare to Pinterest 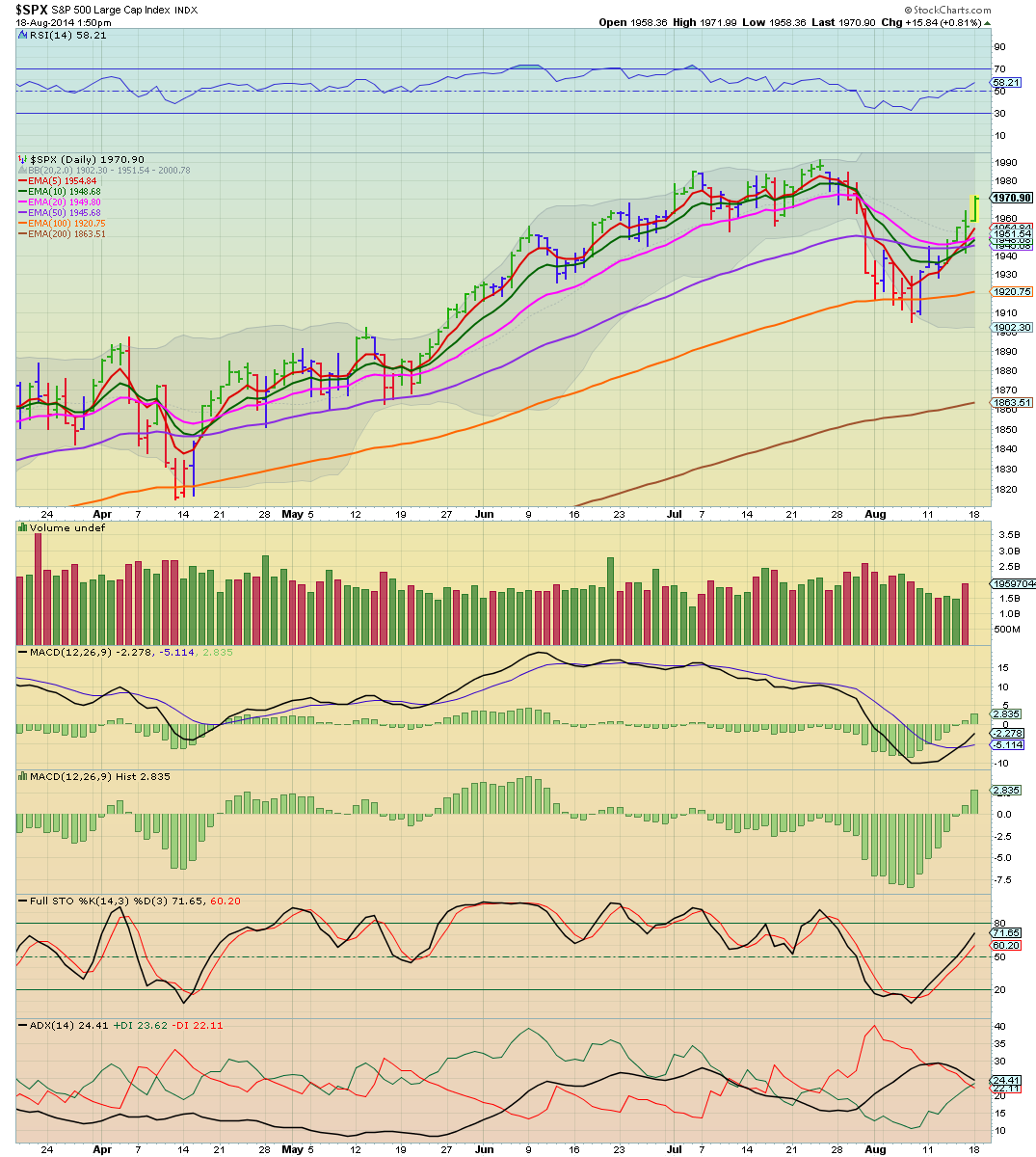 Strip away all the chart counts, support/resistance etc, ... the clear turn (aug'8) was with a rather clear blue candle.

Market is outright bullish... with ZERO sign of this levelling out any time soon...2000s are viable in the immediate term.. but will more likely be hit on the a secondary attempt in late August/early Sept.
--

*I remain content on the sidelines... at least I'm not short.

Posted by Permabear Doomster at 18:55:00
Email ThisBlogThis!Share to TwitterShare to FacebookShare to Pinterest

US indexes continues to climb, with significant gains for all indexes. The Dow is making a play for a daily close above the 50 day MA of 16847. Daily, weekly, monthly cycles all offer 17200s in the immediate term. 17300/500 zone is viable in September. 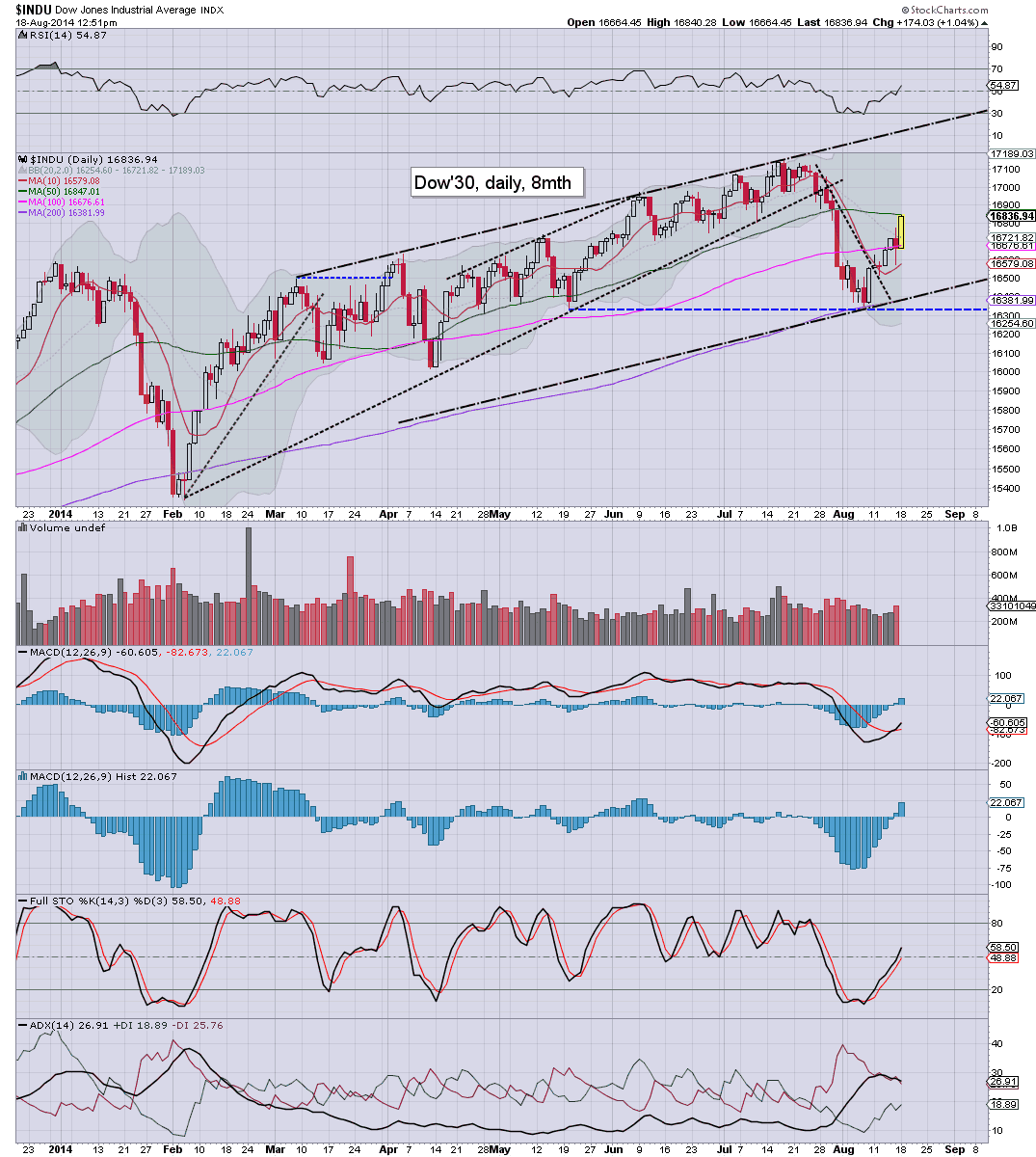 Daily charts offer a straight up run to test the historic highs.. and with the Nasdaq already breaking new post 2009 highs, there is little reason why the rest of the market won't follow.
-

Shippers looking fine.. DRYS +2% @ $3.27...seemingly headed for $4 in September.
Posted by Permabear Doomster at 17:53:00
Email ThisBlogThis!Share to TwitterShare to FacebookShare to Pinterest

...it won't take long to break the giant sp'2000 threshold. Whether this week, later in August.. or September, there seems zero point in attempting any shorts. Indeed, the only weakness is in the precious metals, Gold -$5, with Oil -1.4%. 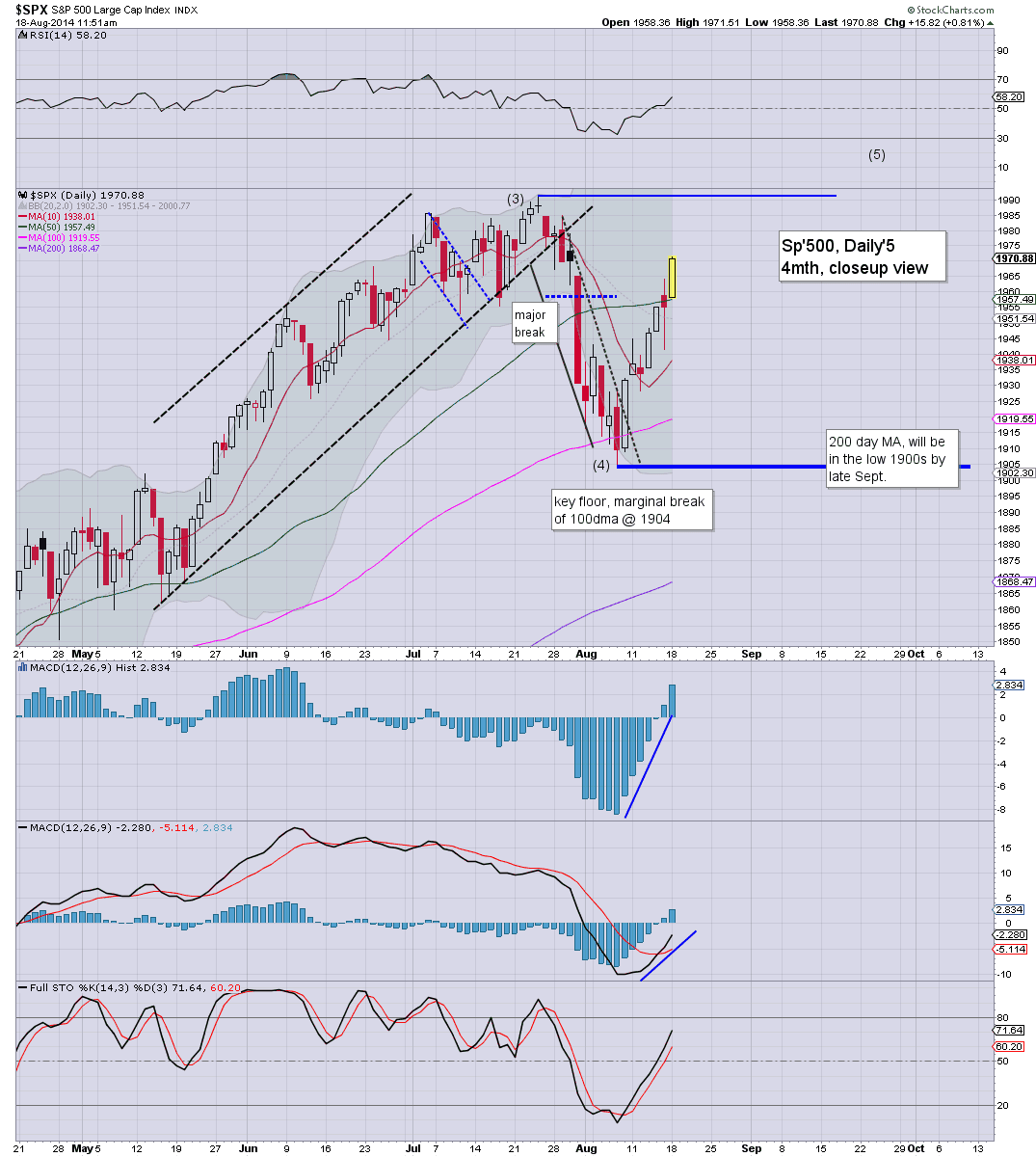 Whether you want to label everything since the sp'1904 low as a wave'1...or whatever... the trend is clearly UP.

No doubt some will be getting overly excited on the next minor retrace..but then...what else is new? 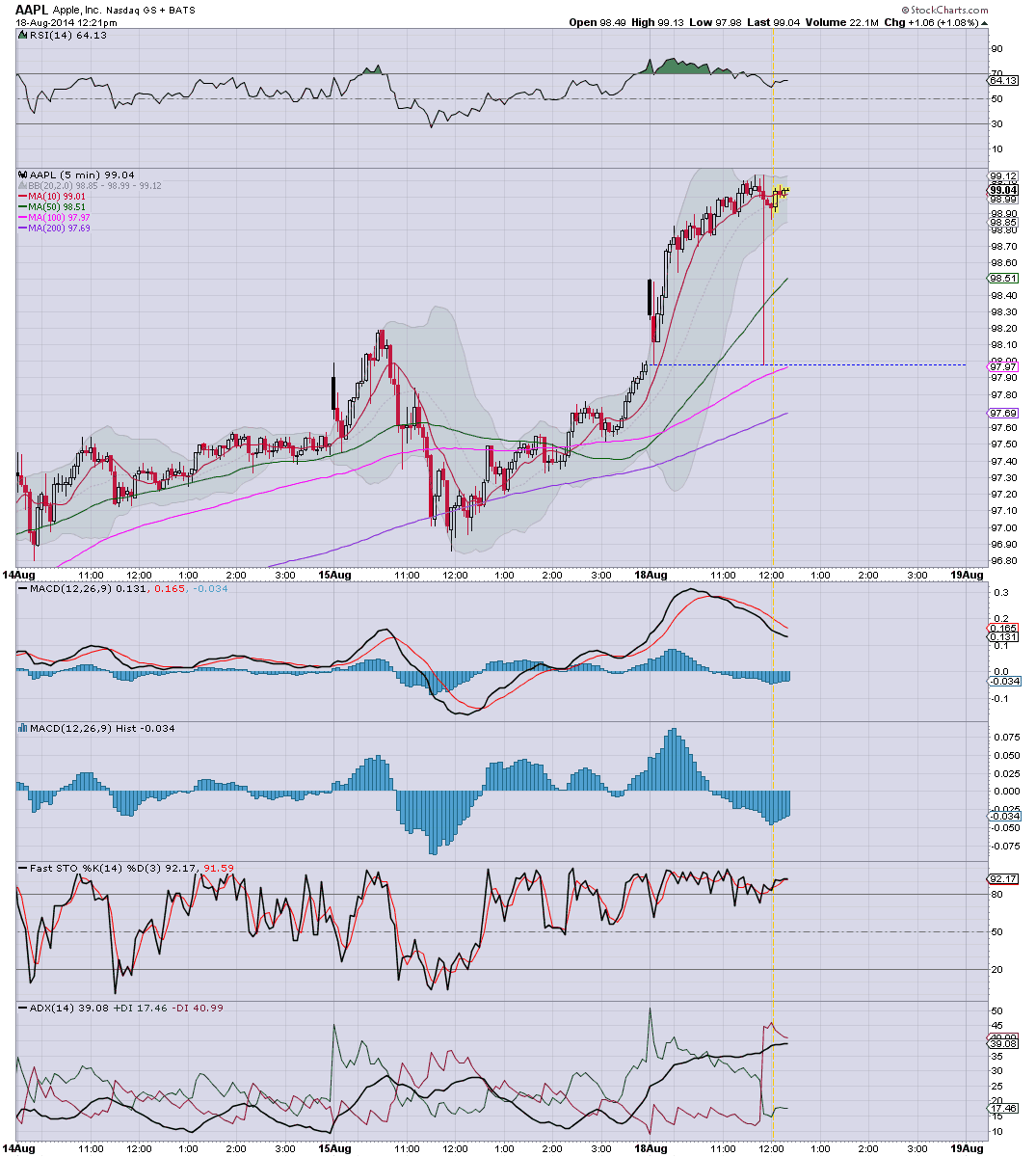 Increasing chatter on Oil...but from a 'bullish economy' perspective.
Posted by Permabear Doomster at 16:52:00
Email ThisBlogThis!Share to TwitterShare to FacebookShare to Pinterest

Equity bears should have already come to realise that sp'1904 was a key low. Price structure was rather clear at the time, and this mornings move into the 1970s is just another  step forward. Metals are weak, Gold -$5. Oil is significantly lower, -1.3% 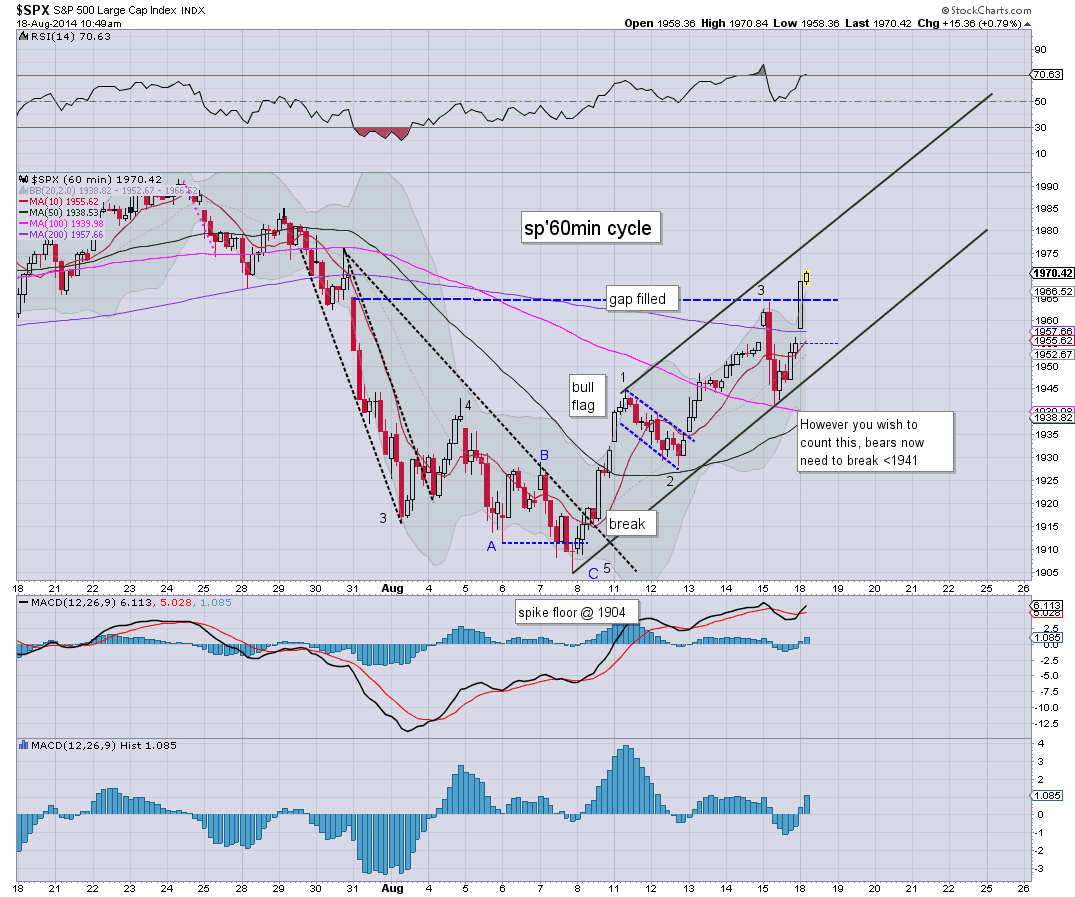 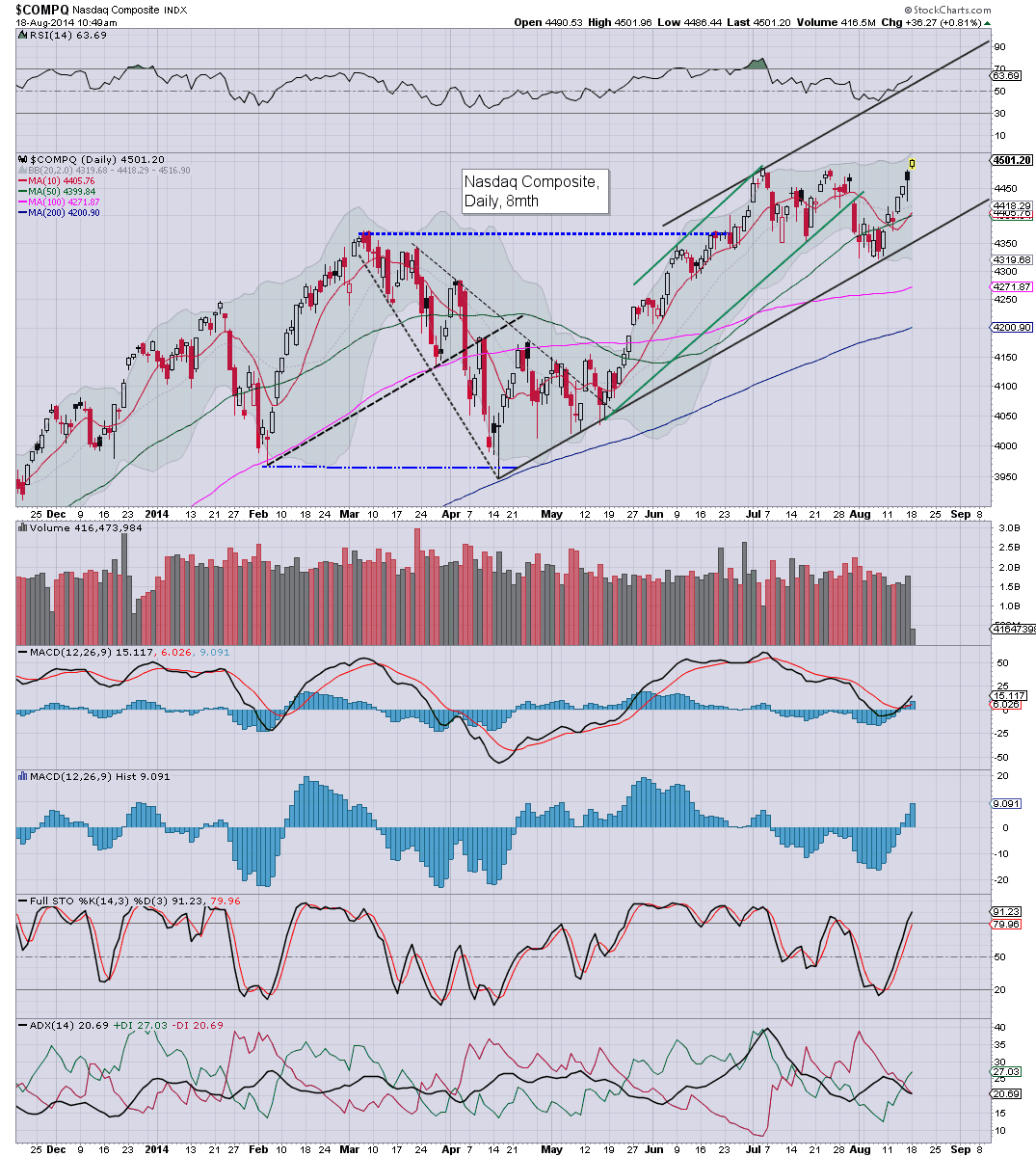 However you might wish to count this nonsense, the trend in the short..mid, and long term remains to the upside.

I certainly continue to think we might see a key top in the 2030/50 zone..but that is likely another month away.
-

Clearly, this is no market for the bears....

*I am not in the mood to chase this higher.. and am content on the sidelines.
Posted by Permabear Doomster at 15:51:00
Email ThisBlogThis!Share to TwitterShare to FacebookShare to Pinterest

US equities are building upon opening moderate gains, with a clear break of the Friday high of sp'1964. There is viable upside to sp'2000 in the immediate term. Metals are weak, Gold -$7. Oil is significantly lower, -1.1%. 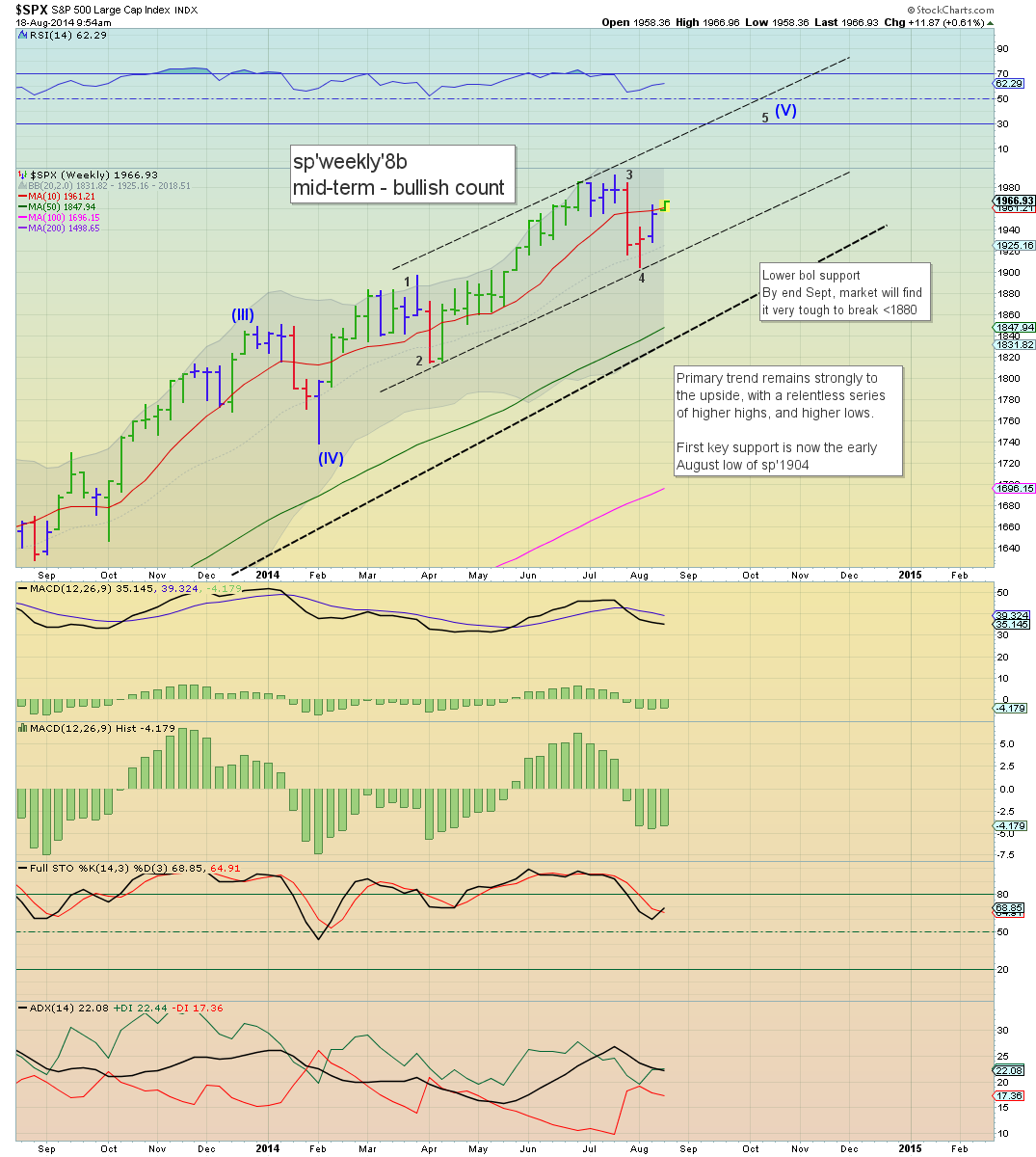 For the equity bears..this is just another typical lousy start to the week.

Good morning. Futures are moderately higher, sp +11pts, we're set to start the week at 1966 - breaking the Friday high. Metals are weak, Gold -$3, whilst Oil is -0.4%. Equity bears face daily/weekly cycles that are both back to outright bullish. 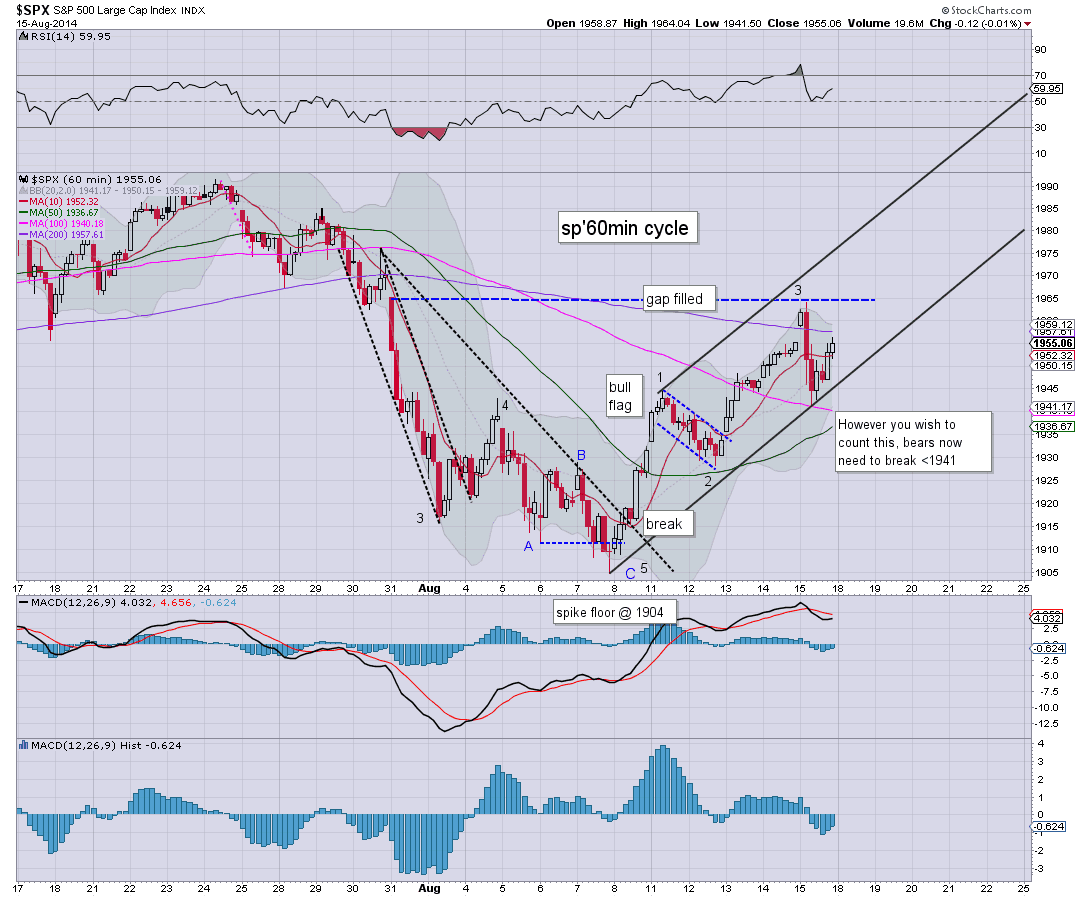 *with the break above the Friday morning high of 1964, I've already updated the hourly chart. What is clear...bears now need 1941..some 1.2% lower, and that does not look likely today.
--

I was looking for a Monday decline to the 1930s - with VIX 15s, but that now looks out of range. I have little interest in chasing this market higher, and will be content to sit on the sidelines.

For me, the only decent short side trade would be from the sp'2030/50 zone... and that would likely not be until mid/late September.
-


Hunter with the infamous TF..aka Hemke

I should note, I've little more than mild contempt for TF. He is still locked in the same mindset from 2010. 'Dollar doom'.. and 'metals to the moon'. Ironically, having called a floor in Silver from $49 all the way down to the teens, he then took his site private. That takes some guile, I'll give him that much.

I'm not sure what I'd call him now. Perhaps 'still wrong' would suffice.

Anyway, Hemke is great example of someone who is stuck in a mindset of denial...utterly unable to consider other alternatives. So much for the 'alternative financial media'.
--

Good wishes for the week ahead.
-


8.53am.. reading around this morning... I still see everyone getting overly wrapped up in tiny moves.

What about the broader trend? Many were getting overly hystrical last Friday morning, and now we're facing the 1970s as soon as today.. a mere 1% from historic highs. Sp'2000s sure will help to 'cleanse' the blogosphere of another wave of doomers.
Posted by Permabear Doomster at 13:22:00
Email ThisBlogThis!Share to TwitterShare to FacebookShare to Pinterest
Newer Posts Older Posts Home
Subscribe to: Posts (Atom)