Volatility soars into the 20s

The VIX has broken the key 20 threshold for the first time since last December. It is a great victory for the bears, and bodes very badly for the equity bulls in the days, and next few weeks. Equities could easily bounce, but that won't negate the importance of today's break through. 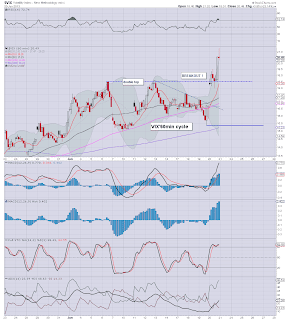 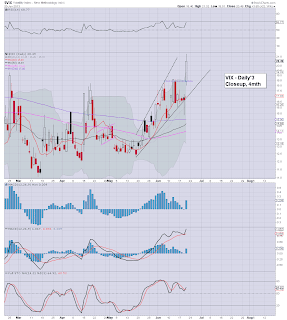 Well, I sure didn't expect VIX 20s today, and I don't know of anyone else out there who did.

Today's VIX close showed a touch of weakness, but still, this is first VIX 20 close since December, and equity bears should be delighted with it.

The only now is what level will the VIX spike to, when the sp' is hitting the lower weekly bollinger band - somewhere in the low sp'1500s.

Are the VIX 30s viable in this down cycle into early July? Considering today's action, there is the slight possibility of it.
--

more later, on the indexes
Posted by Permabear Doomster at 23:14:00
Email ThisBlogThis!Share to TwitterShare to FacebookShare to Pinterest

With the market opening under the important sp'1620 support, the bulls were in trouble, and for the first time since last November, the bears took absolute control. Near term looks weak, and despite a very likely bounce, a move down to sp'1550/30 looks very possible next week. 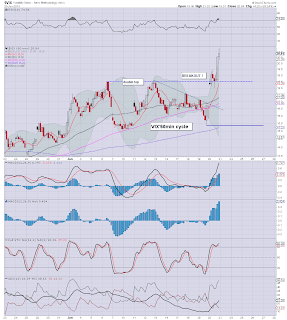 Congrats to all those good bears who were shorting since the 1650s earlier this week. Its been a long time coming, but today is certainly one to revel in.
--

*Ironically, yours truly remains on the sidelines, but that's okay. I will merely look to short the next bounce, whenever...that might occur.
-

bits and pieces across the evening!
Posted by Permabear Doomster at 21:02:00
Email ThisBlogThis!Share to TwitterShare to FacebookShare to Pinterest

Well, sp'1598 failing to hold, we've seen another significant move lower to 1590. Perhaps even more importantly, the VIX has just broken the 20 threshold, for the first time since last December. Today is a massive victory for the bears. 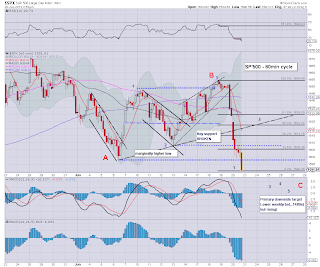 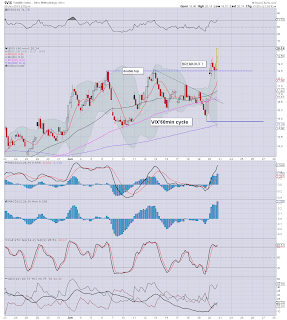 So much is going on, hard to keep up, not least in the precious metals.

Some very exciting..and busy trading days ahead, where the VIX is likely to be well into the 20s, possibly even 30s if the next big wave is severe.


3.12pm..watching Santelli on clown network, talking about Gold..and the four witches for tomorrow :) 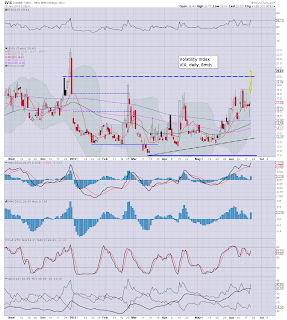 The obvious thought is, what about Friday morning? Another gap down, or stabilising, and then a 1-2 day bounce?

Considering everything, I have to still believe a significant bounce is due..but even the 1620s now look a long way up.

Been such a long time since we seen this sort of trading action.

One thing that can be taken away from today...'short the bounces', at least until the lower weekly bol...currently in the 1480s

VIX in the 21s...are we looking at 30s by sp'1500 ?
Posted by Permabear Doomster at 19:54:00
Email ThisBlogThis!Share to TwitterShare to FacebookShare to Pinterest

The market is indeed weak, and pulled back to 1599..but it held. It is very likely a good floor test, and now the market can battle higher. Primary target zone remains 1625/27, that seems more likely Friday, than late today. Precious metals remain...obliterated. 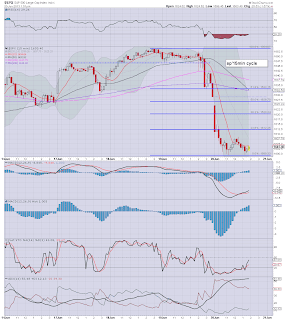 So...a floor test..and I have to say, its looking rather good.

I will NOT be going long, despite my immediate outlook.

I am resigned to now looking for much lower levels in the days ahead..perhaps as low as 1510..if the market really gets upset. 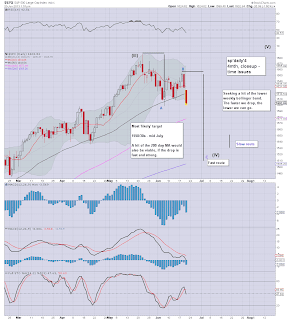 2.32pm...truly lousy day for those long. Dip buyers getting  whacked.

I'm sure tempted to go long here...but no.

Bounce target..short-entry..remains 1625 or so..which now is no viable until tomorrow.
--
Posted by Permabear Doomster at 18:52:00
Email ThisBlogThis!Share to TwitterShare to FacebookShare to Pinterest

The market has seemingly floored @ sp'1599, and is now in the process of some degree of bounce. Primary target zone is 1625/27, although that might take until Friday to hit. It remains a bit tricky out there, but what is clear...we ain't going up. 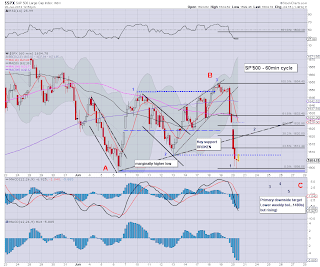 Suffice to say, I think the bounce will continue across most of the afternoon.

VIX has cooled down significantly, and is again supportive of am equity bounce.
--
I remain on standby to launch a major short in the mid 1620s, with a downside target of 1480s - but that target is rising each day.

It'll probably hold...hourly cycle would suggest it
Posted by Permabear Doomster at 17:53:00
Email ThisBlogThis!Share to TwitterShare to FacebookShare to Pinterest

12pm update - bulls should be scared

The market has broken many key levels, and already effectively tested the 1598 low  Even though it held on this down cycle, I've near zero doubt it will fail in the next down wave. Primary downside target is the lower weekly bol'..currently @ 1488, and will be 1550/30 by mid-July 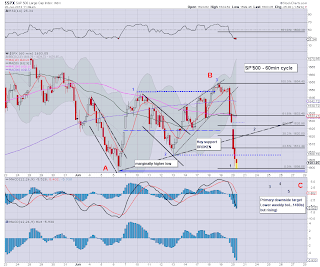 sp'weekly7 - this is the count I am now going with 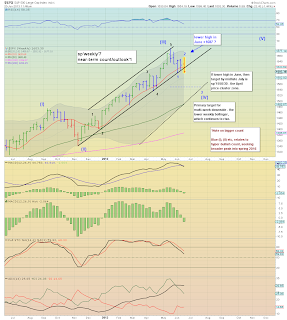 So...lets see what kind of bounce the bulls can muster. I certainly think the 1620s will be hit later today.

--
*sadly apt for the market bulls out there, this was just posted a little earlier

Even a mobster needs a cuddly bear at night. Farewell Mr G.
--

Target..slightly refined..to 1625/27
Posted by Permabear Doomster at 16:50:00
Email ThisBlogThis!Share to TwitterShare to FacebookShare to Pinterest

11am update - waiting to short a bounce

With multiple supports having failed, the market is without question..broken, at least in the immediate term. A small bounce to around sp'1625/30 looks viable, and that should make for a very reasonable short entry. Downside target is sp'1480s..but that target is rising...each day. 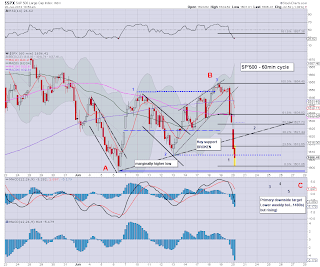 *I remain on standby to launch a major short..later today...although perhaps it might take until tomorrow. I'm in no hurry.

Bears should be bailing...and day-trader bulls can move in now..with stop @1599.

Personally, I'll just wait for the bounce to play out. 1620s look VERY viable later today.
Posted by Permabear Doomster at 15:55:00
Email ThisBlogThis!Share to TwitterShare to FacebookShare to Pinterest

A great many support levels and thresholds have been broken with today's opening fall. It would seem a particularly bearish scenario is now playing out. Primary downside target is the lower weekly bollinger.. currently in the sp'1480s, this is viable within...days. 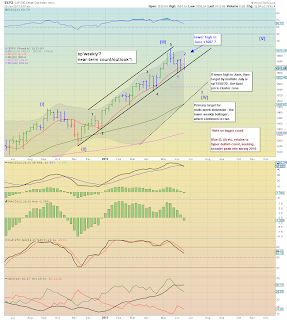 The above is the scenario I will now be running with.

The bulls have tried VERY hard in the past few weeks, but weekly charts are tired..and are now ALL very bearish.

*I will look to launch a full re-short, later today..on the next bounce.

What does seem clear...with trend support broken...going long is now OUT of the question.

All that's missing is a break in the VIX into the 20s. 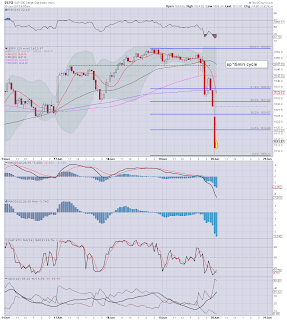 10.01am...data comes in relatively good...we should start to ramp from here for a few hours.

..and thats WHY I won't be taking any long positions now.
--

Still seeking a bounce..and will launch a short later today. 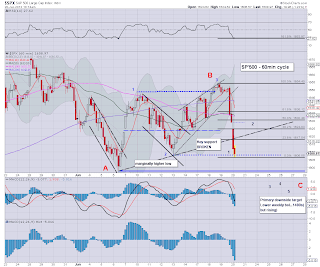 It would seem those looking for a giant ABC wave lower - from 1687 were correct.

Seeking a short on the wave'2 bounce.

That should make for a rather good short-level. I suppose it might take until late Friday, but lets just see what the market does.


10.39am...looks like VIX 20s (whether today or tomorrow...not important) will be hit..and that is yet another clear warning of trouble for the days ahead.
Posted by Permabear Doomster at 14:53:00
Email ThisBlogThis!Share to TwitterShare to FacebookShare to Pinterest 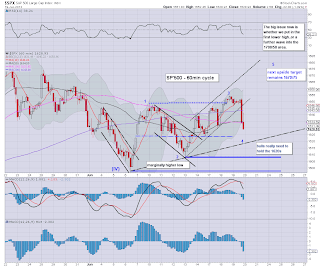 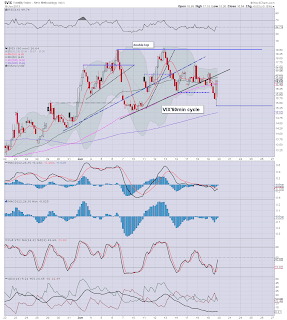 The bulls look in real trouble, and the door has now opened to the lower weekly bollinger - currently in the sp'1480s.
-

Chasing the open..on the short side doesn't seem like the best of ideas.

With break of support, default trade is to launch a major re-short, on the next 15min cycle bounce.

*lots of econ-data between now and 10am, and it should be kept in mind, today is a $3bn QE-pomo day.

Within the next 2-4 weeks...but possibly 'days'

*looking to launch an all out SHORT of the market..later today..on the next micro-bounce.
--
Posted by Permabear Doomster at 13:23:00
Email ThisBlogThis!Share to TwitterShare to FacebookShare to Pinterest

Printing to the moon

Despite the Fed upgrading their outlook for inflation and employment, the monthly QE of $85bn will continue in full. The 'taper touters' are already looking to the next FOMCs of late July and mid Sept, but then, why would the fed ever end QE, which has unquestionably pushed equities higher? 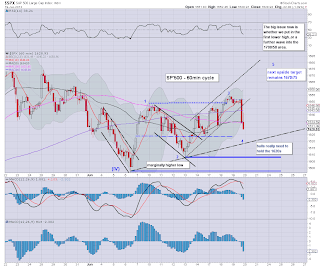 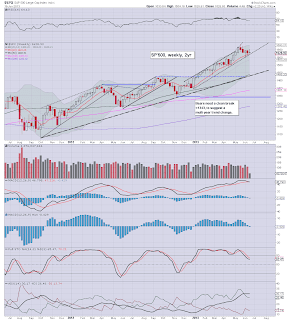 Well, that was a particularly fun afternoon. Certainly the 2pm hour was a real mess of small scale price chop, but the downside really solidified in the closing hour. Yet...the VIX only closed flat, and that is one primary reason why I think this is probably a one day anomaly.

Primary trend remains to the upside - not least on the monthly charts.

Perhaps the biggest story of the day was the daily close in the 10yr bonds, which closed with a yield of 2.33%, the highest since August 2011.

I've not posted this chart/outlook before, but here is a very broad monthly look back, and forward. 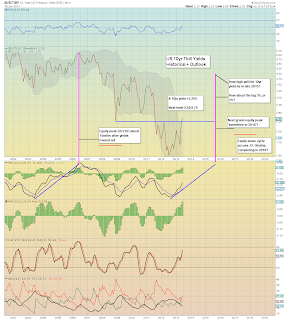 I've added a very simple extrapolation of the 2003-2006 MACD cycle to the recent low from summer 2012. No doubt some will roll their eyes at that, but regardless, the point is clear, stocks rallied from 2003>2007..whilst yields went broadly UP.

Rising bond yields do NOT equate to collapsing equities. Indeed, as many have recognised, the housing market will probably pick up as mortgage rates increase, as those still looking to buy, will start to realise that rates won't stay this low forever.

From a grand cycle perspective, bond yields maxing out in late 2015 would be rather appropriate, before the next major equity down cycle. Of course, that is a very long way out, and despite having a deep interest in the bigger picture...I will still trade things...one day...at a time.

There is an array of econ-data tomorrow. We have the usual weekly jobless data in pre-market. At 10am, there are leading indicators, housing data, and Phil' fed survey.

I'm guessing the market will take some of that data as 'green shoots', and will rally on it.

*I will look to go heavy LONG in the early morning, but will probably exit for a day-trade - if significant gains after a few hours. Until we take out the 1687 high, I am somewhat cautious about the mid-term outlook.
--

Futures are sp -10pts, which would be a clear break of trend/channel rising support of sp'1620. 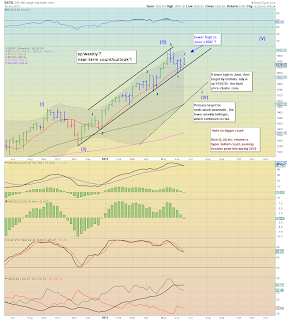 Natural downside target would be the lower weekly bollinger, currently @ 1488 (but rising). Without question, the last line in the sand is 1598, if not the more recent 1608. By mid-July, we'd be looking for 1550/30 - which interestingly, is where we floored in mid April.

So, lets see where we open, and what sort of bounce we get..as no doubt we will get one, probably starting no later than 11am.

Despite the Fed deciding not to taper the $85bn of monthly QE, the market sold significantly lower, with the sp' -22pts @ 1628. There is rather important rising support @ 1620, and the bulls must at least hold 1608. With QE-pomo continuing, I believe the general up trend will resume. 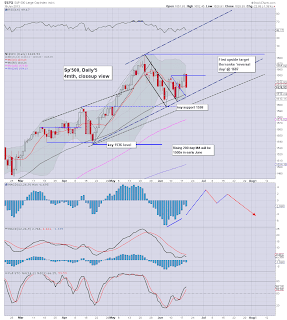 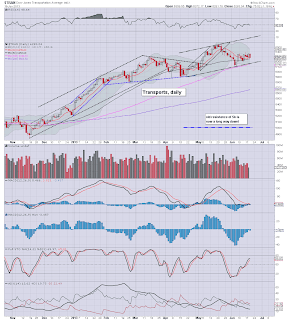 Today was even more dynamic and exciting than I was looking for. The closing hour price action was especially weak, but still, it was only a little more than a 1% decline for the indexes.

Lets be clear, the primary trend remains to the upside.

Bulls just need to hold the rising support in the low 1620s, or at least the recent key low of 1608.

Of course, if 1598 is broken at ANY point in the next few days, then things will have changed. However, my best guess is that...won't happen.

--
*baring a break in the opening 30mins <1620, I will look to go HEAVY long the market early tomorrow, which happens to be a mid-sized QE-pomo day of $3bn