The US equity market climbed for another week, with most indexes managing gains of around 2%. Strongest was the Nasdaq, with gains of 2.8%, Transports was weak, but still rose 1.7%. Despite the gains, bulls are somewhat losing some of their earlier momentum.

--
Lets take a broad look at six of the main US indexes. Also covered today are the commodities of Copper and Oil, and a consideration of how deep an equity retracement might be. 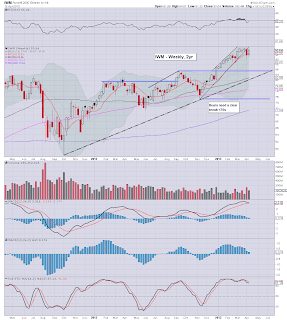 The second leading market index saw gains of 2.1%, but the R2K did not break the March highs, and has been somewhat stuck for the past five weeks. Underlying MACD (blue bar histogram) cycle ticked lower, and is set to go negative cycle within two weeks. 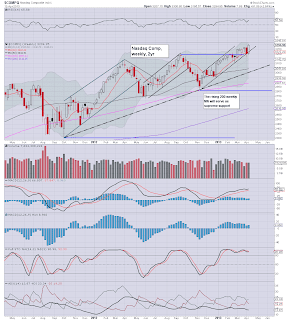 Tech was the leader this week, and indeed we saw the Nasdaq break very clear new highs. Underlying MACD cycle ticked back upward, but the price momentum is still 'generally' starting to weaken...if only a little. 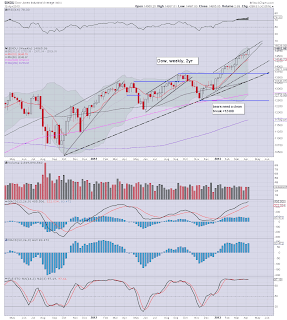 The mighty Dow clawed almost another 300pts higher, and actually broke above what was a pretty good narrowing wedge. Upper bollinger on the weekly chart offers 15050 or so next week, that's another 1% or so. 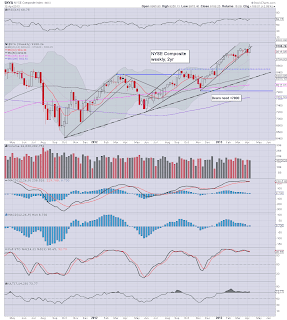 The master index broke out of a 4-5 week range, with gains of 2%. MACD cycle is very marginal though, and could flip to negative cycle at any point. Its arguably looking...tired. 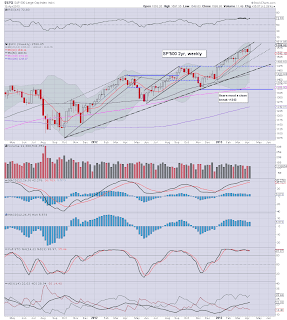 With the break above 1576, the bulls did have something very significant to get excited about this week. The sp' hit a high of 1597.35 on Thursday, and its possible that was the high of this multi month up cycle.

However, until we take out the March'19 low of 1538, bears should have no confidence that 1597 was a high - even an intermediate one.

Best downside case for bears is arguably the old Sept'2012 resistance/high in the 1470s. Right now, I just can't envision the market trading <sp'1400 for many months. 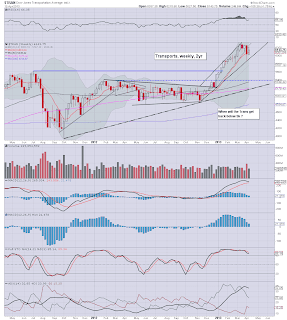 The old leader was the weakest index of the week, but still clawed 1.7% higher, but it certainly failed to break recent highs. From a MACD perspective, it is the weakest index, and looks set to go negative cycle within the next week or two. The obvious downside target is the old breakout level of 5400, which is around 12% lower than current levels.

More than anything, what is clear is that the headline/media focused indexes of the Dow, SP, and Nasdaq are far stronger than the Transports, R2K, and the NYSE Comp. I could think of a few reasons why that might be, but whatever the cause, we do have something of a split market right now. Although of course, ALL indexes are generally still managing to climb.

Near term trend is clearly UP, but underlying momentum is still somewhat weaker than it was in March.


Copper and Oil warning of deflation

The issue of inflation or deflation will always be a key macro-economic issue, and one I will keep bringing up. I remain somewhat on the deflationary side - although with the continuing QE madness that most of the central banks are doing, it is certainly less of an issue than it might have been.

Lets take a mid-term overview of the two big commodities...Copper and Oil. 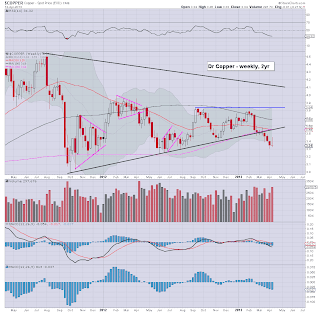 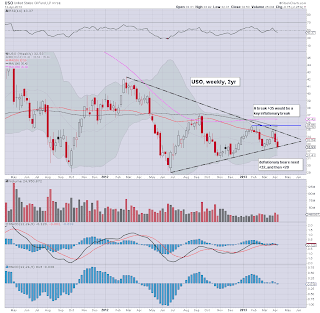 Copper clearly broke down a few weeks ago, and Oil is now somewhat borderline..and it will only take a break <$90 on WTIC Oil, and we should see $85 hit within days..if not hours.

There are plenty of VERY diverse outlooks out there still. I see a fair few analysts touting Oil @ $50, which sounds crazy, but then, we do have a global economy that is weak. Then there are the Oil $150/200 people, although most of them are assuming its due to an Israel/Iran conflict.

With Copper already broken - and the precious metals now having followed, I have to believe Oil will fall into May. The only issue then is whether we are merely in the $80s..or making a play to take out last summers low of $77.

Near term market trend is still higher, but the daily, weekly, and even the monthly charts are looking over-extended. On any basis, we're due a multi-week down cycle.

The following is one of my particular favoured near term scenarios.. 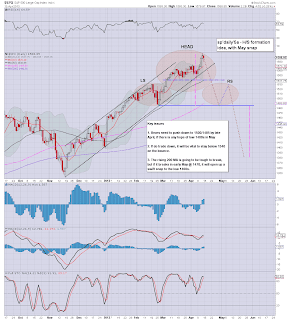 Clearly, this assumes 1597 was a key high, and that we'll be breaking under what has been strong support @ 1538. If the bears can just break that level, it should open up a rather straight forward drop to sp'1500, with a primary target zone of 1485/75.

The following chart is something I am really starting to like. For the fibonacci fans out there, take a good look at this... 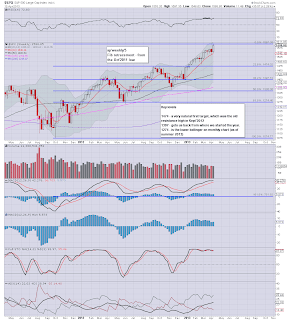 Look how the retracement levels are all at key market points. The more I look at this chart, the more I have to believe we'll at least get a down cycle to the sp'1470s this May. As I like to highlight though, note the rising lower bollinger on the weekly, now @ 1385..that is likely to be in the mid 1400s by late May, which is largely why I believe its increasingly not feasible to expect any initial wave lower than the sp'1470s.

There is a moderate sprinkling of econ-data next week. Perhaps the latest Fed beige book - to be issued Wednesday afternoon (or Tuesday if you're on their email list), will be the most notable data point of the week.

Yet, its a big earnings week ahead, so we'll probably see everyone focused on individual companies for a clue as to how Q1 GDP (due Apr'26) will turn out. I think there is a real threat of GDP coming in -0.5 to -1.0%. If that is the case, this market needs to greatly re-price.

As ever, all comments are appreciated.....I will return on Monday!
Posted by Permabear Doomster at 19:06:00
Email ThisBlogThis!Share to TwitterShare to FacebookShare to Pinterest

The main indexes were moderately weak across the day, and there was something of a latter day recovery - especially in the Dow which closed flat. Most indexes closed -0.3% or so, which was surprisingly strong after recent gains. VIX again confirmed the markets complacency. 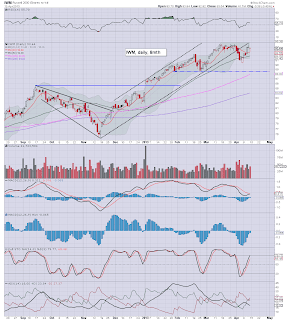 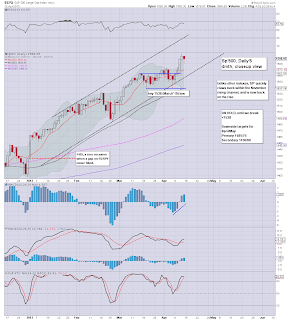 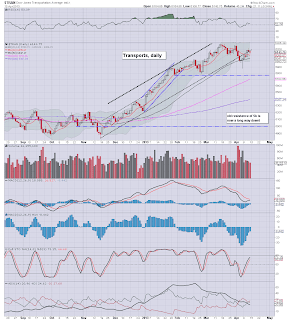 Suffice to say, the US indexes held up very well today, this was despite some rather lousy retail and other economic data.

My best guess is that the market has maxed out at sp'1597, but we'll need to see a few daily closes back under the old resistance/high of 1576. Even then, bears can't be confident until we take out the key March'19 low of sp'1538.

Until we're trading under 1538, the bulls are still broadly in control, as supported by the bigger weekly and monthly charts.
--

That is all for today..and the week.

*next main post, late Saturday, on the US weekly indexes
Posted by Permabear Doomster at 01:00:00
Email ThisBlogThis!Share to TwitterShare to FacebookShare to Pinterest
Newer Posts Older Posts Home
Subscribe to: Posts (Atom)