A very strong week for the US markets, and despite the claims of those in abject denial - the largely 'burnt' doomers out there, with the Bernanke bux now flooding the equity market, aided by the algo-bots, a major rally is underway...and accelerating. 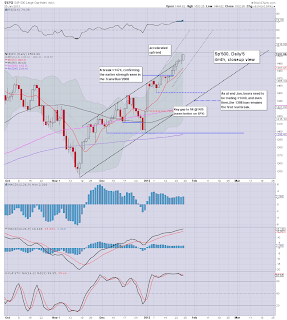 Another fine victory for those on the smart side of this relentlessly powerful market.

We've seen further good gains, for what remains one of the strongest equity markets in the world. In particular, we've now seen the SP and Dow' join the Transports in what is a new accelerated stage of this up wave.

A large wave that is likely to continue for many months to come.

With the careful orchestrations of the US Federal Reserve, the new POMO $ will help to fuel a very strong rally across this year. There will doubtless be little waves lower along the way, but they will likely be even more limited than the ones seen in 2012.

An incredible spring is ahead, and I think we can look forward to some superb index gains to come, lead by the old leader of course.


Highlight of the week?

Well, that would have to be seeing people post about how APPL is overvalued. I can only assume those are the same ones who think AMZN is 'cheap'.

Its a bizarre twisted world out there, its hard not to get lost.

Have a great weekend!
Posted by Permabear Doomster at 21:02:00
Email ThisBlogThis!Share to TwitterShare to FacebookShare to Pinterest

The equity indexes keep on pushing to new highs..and once again the POMO money is kicking in, and the algo-bots are loving it. Oh the bullish hilarity of this market. Metals/miners remain weak, yet the Mr $ is also weak. 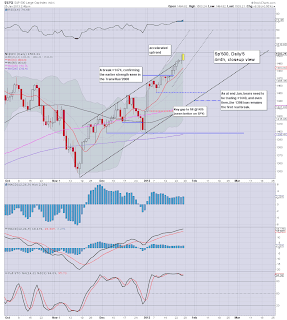 What else to say?

Video of the year so far...

part'2 - the interesting part..ackman and Icahn


back after the close
Posted by Permabear Doomster at 19:50:00
Email ThisBlogThis!Share to TwitterShare to FacebookShare to Pinterest

The indexes are making another play to claw to new highs, and yet the doomer talk continues. The relentless 'ohh, the wedge is playing out'. It won't stop..ever. Even if we're trading in the sp'1700s later this year, we'll no doubt see the same nonsense talk. Its not worked out since 2009, and it won't likely work now. 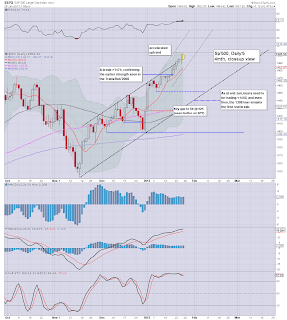 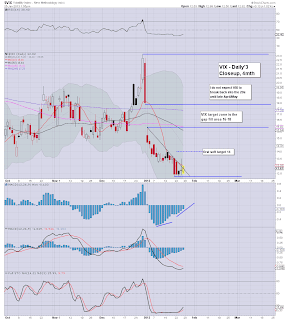 The indexes showing no sign of turning yet, although yet again the VIX is holding the recent lows, and seems likely to close a little higher.

Metals and miners remain weak..a nice little wash-out move in both seems likely into mid February.
Posted by Permabear Doomster at 18:57:00
Email ThisBlogThis!Share to TwitterShare to FacebookShare to Pinterest

12pm update - nothing much

Another day of 'nothing much'. The indexes are somewhat mixed. The trans is a touch lower, whilst the other leader - the Rus'2000, is putting in yet another new high. The sp' is trying to break a new high..but looks somewhat stuck. The only notable mover today are the miners, -2.5%. Gold being lower sure doesn't help. 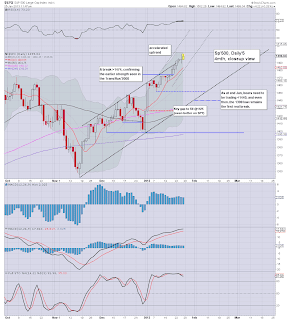 Underlying MACD cycle on the VIX daily continues to crawl higher, but we're still a few days away from going positive cycle. Even then, maybe we'll get stuck in the 14/15 range, without even testing the 16s.

World markets are extremely strong, only a few of the EU PIIGS are still lagging.

Ohh..and AAPL..is now stupidly under-priced, not that its floored... yet. 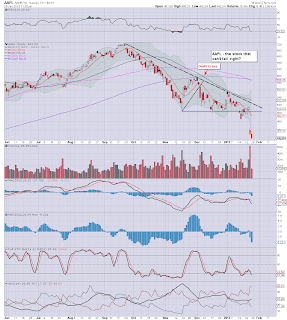 It remains a..stupid market. The notion of fair value completely gone..right now, on both sides of the spectrum. 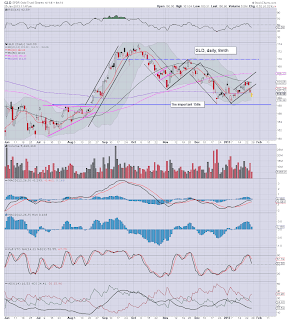 With the break of the bear flag..we'll surely come down to test the 158 level. If Mr Market wants to wash-out the gold bulls with stops..then a brief move to 155 seems likely by mid-February.


back later
Posted by Permabear Doomster at 16:49:00
Email ThisBlogThis!Share to TwitterShare to FacebookShare to Pinterest

10am update - another day of the same

Good morning. Futures flipped from sp -5pts to open +5pts..and we're back to the sp'1500s again. For the second consecutive day, the metals are especially weak, and both could break the key low from mid-December. 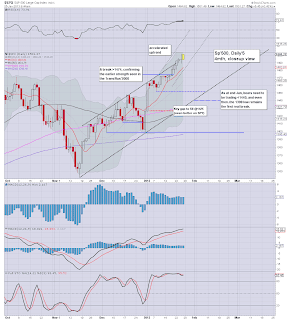 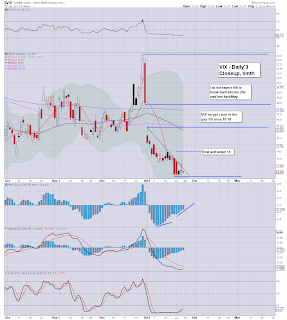 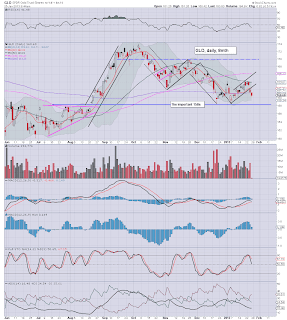 Why would today be any different?

Its time to embrace the Fed. They won, and are to be congratulated. The reflation IS here, and its happening all across the world. Go look at the world indexes.

What would be truly laughable is if we get a retracement of a few percent, only for most of the doomer bears to get hysterical that 'omg, the wedge is playing out...short..short it all!'

Idiots. Its nothing less than denial of the past 4.9 years of abject failure of 'fighting the fed', but even more embarrassing is the memory lapse of what happened in the POMO fuelled rally of autumn 2010/spring 2011.

---
back later
Posted by Permabear Doomster at 14:47:00
Email ThisBlogThis!Share to TwitterShare to FacebookShare to Pinterest

Ohh, so its a bearish wedge, right?

With the sp'500 breaking through the big psychological threshold of 1500 this morning, the bulls are clearly still in control. Any minor intra-day declines are still relentlessly recovered almost entirely each and every afternoon. This market is currently headed...for the proverbial 'moon'. 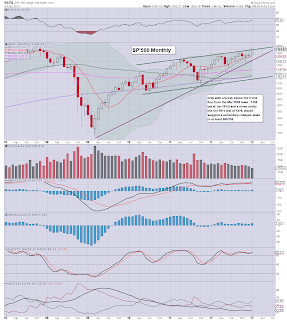 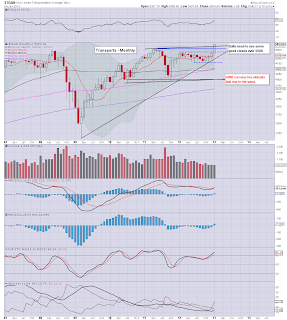 Which is the leader?

Without question, the Transports IS..and always has been the leader, literally usually referred to as the 'old leader'.

Yet, what does a brief perusal of the usual chart websites all suggests? They are still clinging to the notion of a giant bearish wedge..as seen on the SP'500. But that is the WRONG chart to be focusing on.

It is time for the doomer bears who are still staring at the SP' charts..to maybe spend a few hours instead staring at a chart of the Transportation index which was the LEADING warning of massive upside from mid-December onward.


Be mindful of the Bernanke POMO

I am really surprised at the lack of due respect the new QE - via POMO, is being given by the majority of posters out there. After all, just look what happened last time we had this stream of 'free money' thrown at the primary dealers..who are (probably) then having it funnel its way into the equity market.

The relentless algo-bot ramp of autumn 2010 - and continuing into spring 2011, was something I thought most would never forget. Yet they have.

So far, we've see 3 weeks of POMO..and 3 weeks of relentless melt. How about another year  of this? Or 5... or 10?  After all, just which part of 'endless QE' do traders not understand?

As for tomorrow,  again, what should we expect? Maybe minor declines..and then the algo-bots will likely kick in during the afternoon.

What IS absolutely clear, even a retracement down to the sp'1450/40s - were it to occur, would do nothing to damage the now extremely bullish equity market.

*ohh, and go look at the world indexes, the majority of which are now busting well above old resistance, and there is open air of 15/20% higher -and that's not even a particularly bullish outlook.
--

Its time for the remaining bears to go stare at that Transports monthly chart for a few hours, and then spend a little time on the New York Fed website.

Another day higher for the broader market, lead once again with further historic highs for the Transports and the Rus'2000. The Nasdaq was weighed down by the 12% decline in AAPL. With the sp'500 breaking the psy' level of 1500, the bulls continue to show their mighty strength. 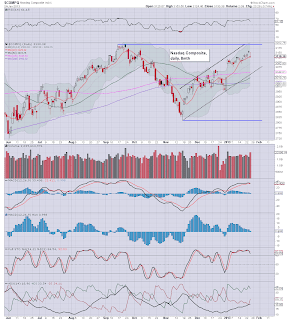 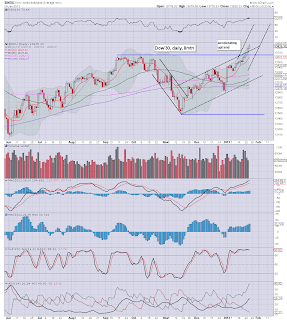 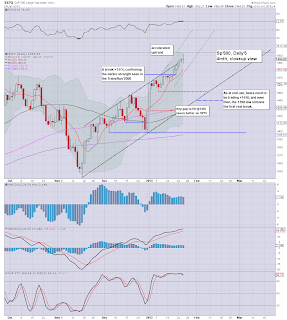 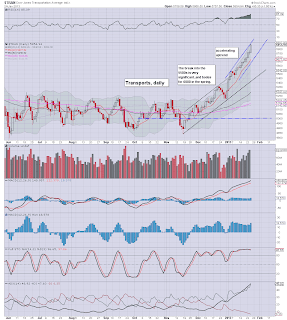 So, yet another day where the Transports ramped 'to da moon', with the Rus'2000 closely following. With the sp' hitting the big 1500 level, it has to be said, this is one hell of a bullish way to start the year.

With this kind of opening, how can anyone now be bearish about the rest of 2013?

Sure, moderate, even a single major pull back (to the 1300/1250s) is still viable, but the primary trend is now extremely bullish.

Anyone with doubts should merely stare at the monthly charts of the Transports and Rus'2000 indexes for an hour or two.


What about the earlier weakness?

A fair few (myself included) were getting somewhat curious about the weakness seen in the early afternoon, but really, it was minor, and the main indexes still closed largely higher. Even the VIX showed a failed breakout, losing 6% of its earlier 8% gains.

Without question, today was just another day of failure for the bears. There really is no reason to expect tomorrow to be any different.