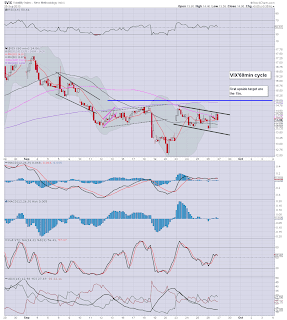 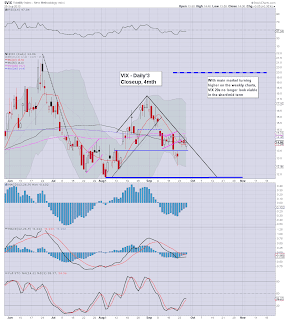 Another day where the VIX slipped into the 13s, even though the market was generally weak.

It remains a fearless market, and that is pretty surprising considering the recent 5 day equity down wave (the first since Dec'2012).

Best guess, equities look set for a new wave higher, with a target of sp'1750/75 by late Oct/early Nov, and that should be enough to kick the VIX into the 12s, if not even the 11s.

This is simply not bear weather.
--
more later..on the indexes
Posted by Permabear Doomster at 23:00:00
Email ThisBlogThis!Share to TwitterShare to FacebookShare to Pinterest
Newer Post Older Post Home