With the main market closing broadly flat, the VIX closed just a little lower, -0.6% @ 12.94. This is the lowest daily close in six days. Equity bears need to see VIX 15s to have any hope of filling the giant gap zone of 16-18. 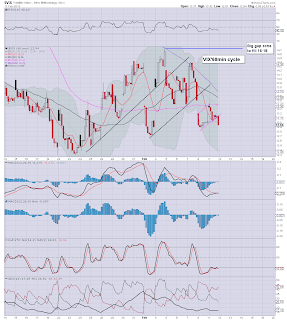 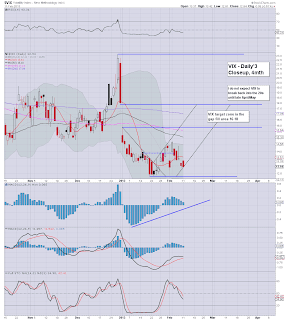 The hourly chart is an absolute mess. The VIX has been stuck in the 12-14s since the smack down from the 23/22s in late December.

There really is only a small moderate upside pressure, but its there on the daily MACD cycle. Bears should look for VIX 15s later this week, but really, that is again probably going to need sp' <1490, which presently looks a very tough task.

As noted earlier, someone was picking up cheap March 18, 19, and 20 VIX calls, but those are  all highly speculative, and I just can't see anything >18 for many months.