With the main indexes continuing to melt higher, the VIX is back on the slide again, closing -1.9% @ 13.31. Even the VIX 14 seems a difficult barrier to break. There remains potential for a brief spike to 15/16, but 18s now seem out of range..for some months. 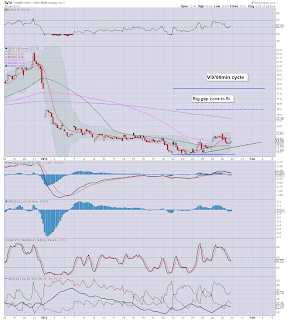 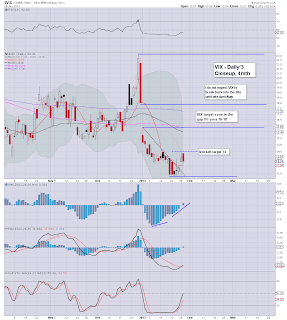 Another day of painful - and utterly mind numbing, algo-bot melt.

It was no surprise to see the VIX slip lower, and its almost a wonder that we're not already trading in the 11s..or even 10s.

The upper bollinger band - see daily chart, is still collapsing, and is now down to 15.98. By the end of this week, it'll probably be around 14.

So..those hopes of VIX in the 16-18 gap fill zone are going to be nigh impossible after this week.

I suppose its possible we could yet hit 14/15..pull back..then battle higher next week..but still..why would next week be any different than this week?