This past week was further confirmation for the bears that a down trend is indeed underway. We saw a further major down move on Tuesday, with three subsequent days where the bulls tried to rally each morning...but failed. With Oil looking weak, and the VIX trying to break back above 20, the coming week should offer some much more dynamic trading action.


Lets take a look at the six main indexes... 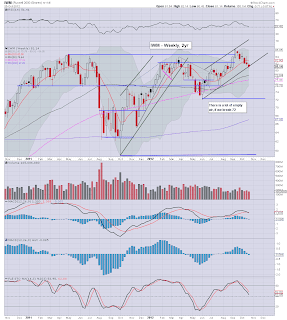 The R2K is down for the sixth week running, and yet the bull maniacs are still surprisingly confident of new index highs into 2013. All indicators are negative, with the MACD (blue bar histogram) turning negative for the first time since early August.

There is nothing bullish here, next target is 80, with a swift move to 76 - which I believe would be a near term floor. 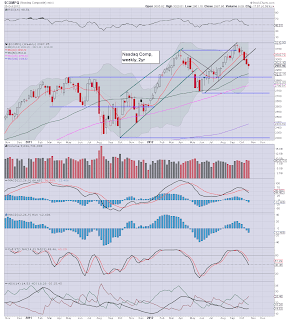 Again, its important to note that what was once the strongest index is now looking one of the worst. The tech' is also now down for the sixth week. With a few daily closes under the big 3000 level, we now have good likelihood of lower levels. 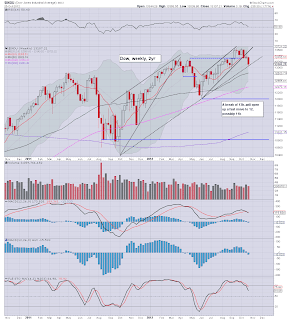 The big Dow'30 came close to breaching the big 13k level, it held, but I'd certainly look for a major move lower in the coming week. All indicators are negative, and have great potential for much lower price levels. 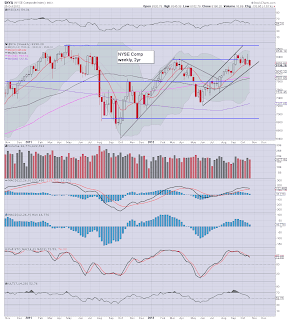 The master index closed the week 1.8% lower, but is still above the important 8k level. A weekly close under 8k would suggest a possible further multi-week drop to around 7600/7500. The underlying MACD cycle is still positive, but is set to go negative cycle within the next 1-2 trading weeks. 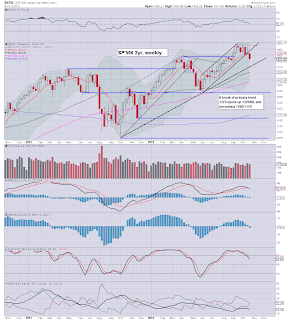 The Sp' just managed to hold over the 1400 level, but the trend is certainly downward. All indicators are negative, first down side target is the secondary rising support (from the Oct'2011 lows) @1375.

If we see a daily close <1370, the door is open to a swift fall to the lower bollinger of 1325. This move could even be done on an intra-day basis if we gap lower by 2% or more.

If the Sp' somehow manages to slide into the lower 1300s, we will very likely see a strong bounce back to the 1400 level. It is at that point (possibly mid/late November), that things will become critical. 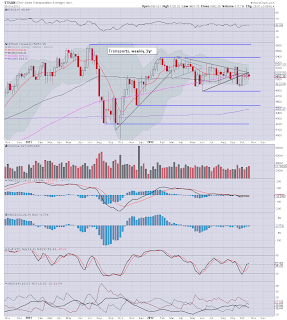 The transports remain the Willy Wonka of indexes, almost entirely trading within its own little world.

With just 3 trading days left of October, the bears would do well to keep in mind that a further monthly close <5000 is an important result to achieve. If that is the case, then a Nov/early Dec' target of 4500/4400 is fully back in play, and would make for a perfect late 2012 low, before Santa appears.

So, lets get this clear..we are generally week'6 down on most of the major indexes. That is a pretty impressive run, although if I dare say, it sure doesn't feel like we've been falling for six weeks. The sad irony is that we're still only 4% (at least on the Sp) from the QE spike highs of mid September.

Four percent in no way can be considered as anything other than 'very minor'. Hell, we've seen a fair few days in the past few years of intra-day swings of 4%.

All those bull maniacs who are calling this 'correction' done, I just have to roll my eyes at those types of comments. We haven't corrected, we're still hovering near the very top of a 4.5 year paper bubble ramp.

Its always hard to guess how we'll open Monday. The last 3 opens have been moderately higher, only to see such gains quickly fade and turn to red. One of these days we're going to see a massive collapse during the Sunday night futures session, but that seems unlikely right now.

However, the weekly charts do all suggest further weakness, and there is ample potential for a major move lower this week.

I would think the dream of any permabear this Autumn is indeed a swift move to the lower 1300s, then a 2-4 week bounce, before the more 'significant' down move in late Nov/early December.

--
I am holding short across the weekend, and seeking my next exit around 1390/75. If the market is real moody next week (with VIX >20), I will merely re-short on any intra-day bounces.

Good wishes for the trading week ahead!
Posted by Permabear Doomster at 19:27:00
Email ThisBlogThis!Share to TwitterShare to FacebookShare to Pinterest

A moderately choppy end to the week for the main indexes. The main indexes closed largely flat, although the Rus'2000 showed further moderate weakness, whilst the transports again does its own thing, closing a little higher. 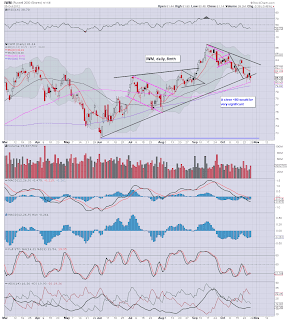 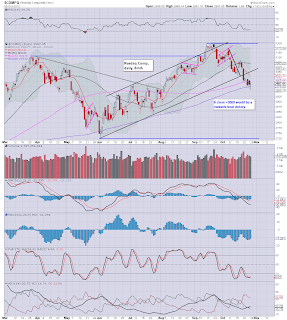 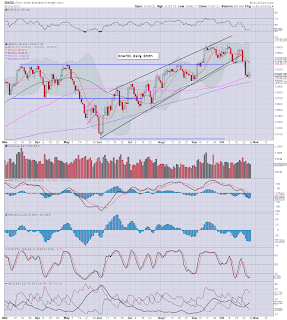 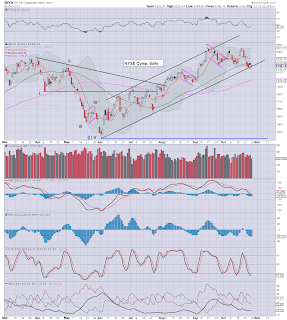 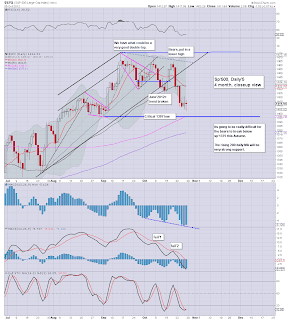 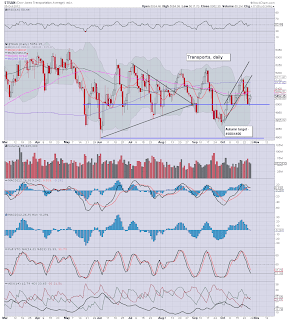 Its been a long day and week, so I'll keep this one short.

Suffice to say, the bears can at least claim a moderate victory this week, although the net weekly decline was only 1.5% (21pts) on the sp'500. It is a small step, but at least the direction is downward.

As for next week, well, I'll post something on the weekly charts over the weekend.