The broader indexes - such as the SP'500, Dow, NYSE Comp, and the NASDAQ all remain outright bullish, sporting green candles on the rainbow charts. For the moment, only the transports remains weak, and is presently set to put in a second red candle on the monthly chart. 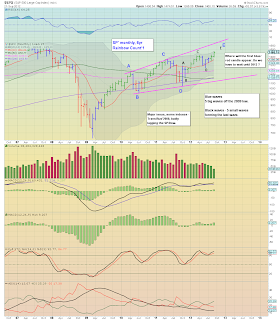 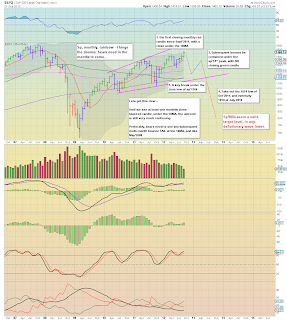 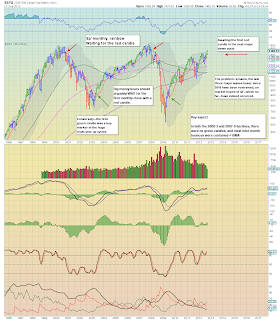 The bears face a real problem. The primary trend on the main indexes is unquestionably still bullish. There is just no sign of this latest rally from the June sp'1266 low ending.

As I've noted before recently, two things need to be reflected upon. At the current rate of trend, we'll close the year around sp'1600, and comfortably hit sp'1800 by end'2013. That assumes no major upsets, black swans, or 'end of the world' events as such. ;)

Anyone currently shorting for more than a few days at a time, is arguably standing in front of what remains a freight train, driven by none other than the Ben Bernanke. A disturbing image, to be sure.

Yet, there remains one major warning of trouble out there....


A reminder on the transports... 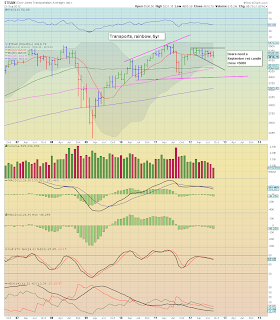 The transports - aka, 'old leader' sure doesn't look as bullish as the more broader sp'500 - or the dow, or even the NYSE Comp'. It is badly lagging, and has been stuck in a tight range since January of this year.


Awaiting a few red flags at the end of September

I suppose its somewhat arbitrary to define a given close at the end of a month as more vital than any other day, but still, what else can we do?

So, at the end of next week..and the trading month I want to see....

1. Transports, red candle for the month, with a close under the 5000 level.
2. Oil...back under $90
3. Dollar, weekly MACD (blue bar histogram) cycle, levelling out
4. VIX, back over 16, preferably 18, and without question, until the VIX breaks back into the 20s, any VIX moves (with corresponding index declines) are very unreliable.

It has to be said, even the transports closing <5k seems a lot to hope for. It really won't take much for the market to have another kick higher, and break into the sp'1500s. As ever, we'll just have to see what happens.

One thing is for sure, an 'October surprise'..is possible, but it may merely be yet another leg to the upside.

Back on Monday....good wishes from London city.