Well, its the weekend, and September has begun. Autumn is really only weeks away, will it be a time for the doomsters to party, or will the zero volume algo-bot melt upward continue to sp'1450/1500? Lets take a look at the hugely important monthly cycle index charts. 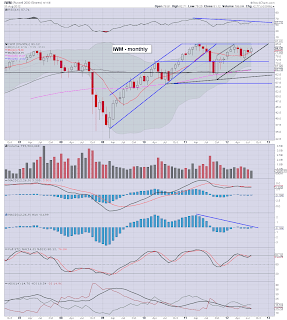 After slight weakness in July, the R2K climbed 3.5%, a pretty impressive amount considering it was a quiet month. Its clear, all those 'doomer bears' out there need IWM <75 to have any real hope of greater things. 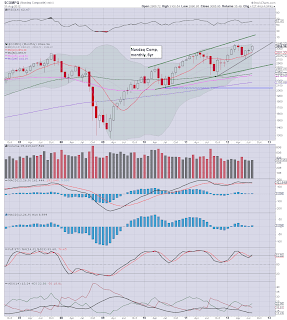 Tech remains the strongest sector, no doubt lead by AAPL, which itself remains undervalued by around 40% relative to the broader market. No sign of weakness here. 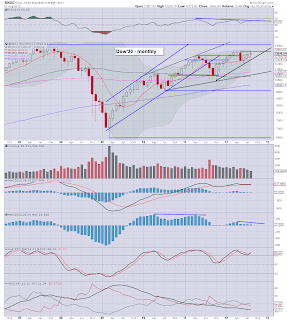 Like most other indexes, the dow is back around key resistance. Only with a break under 12600 can the bears start to claim something might be changing in the bigger cycles.

As things are, if there is no decent sell side volume this September/October, then the bots will remain in control, and we'll see dow 14k..if not higher - since QE3 is coming. 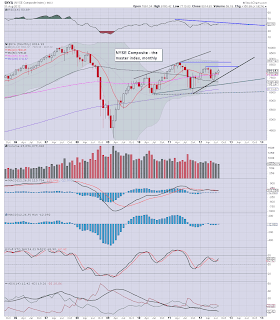 The master index certainly looks tired. Near term trend IS still certainly up, but until we can break the March high of 8327 - some 4% higher, we could be getting stuck.

The NYSE looks like many of the world index charts (see VEU, GDOW), the whole formation could easily be a giant H/S formation. For the moment though, general trend is indeed...UP. 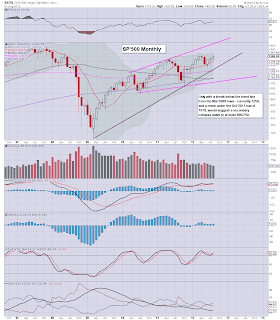 The Sp' remains a leader, and we've seen a new high of 1426 put in. A very natural next target would be the upper bollinger band on the monthly of 1451. That looks easily within reach if there are no market scares this September. 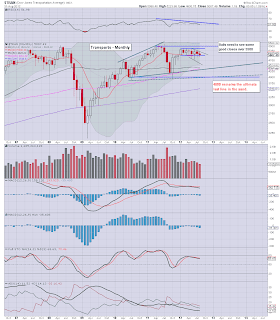 August provided pretty reasonable gains on all indexes (except transports), and we're close to taking out new (post 2009) highs. The broader market most certainly remains on an upward trend.

The Transports, aka, 'old leader' continues to show moderate weakness, although it failed yet again to close outside of the narrow range that its been stuck in since January. It remains pretty remarkable, and I will note once again, the direction in which the transports eventually decides to take, will be a pivotal signal for the broader market.

We can be clear about this much, so far the transports is utterly failing to confirm the dow, and the strength seen in other sectors/indexes. Its certainly a somewhat bearish indicator, but unless we see a monthly close <5000, bears really should not be confident.

So, it can be said that the immediate equity market trend is still broadly upward, but we are at key resistance, if there are any upsets (especially in the EU), then this market will be vulnerable to breaking the ascending trend line - equivalent to sp'1350, and then the door would be open for a swift move to the low 1200s.

To all those who say the market can't..or won't be 'allowed' to fall because there is an election coming, I can only say...

Goodnight from London (catch me at 1.04 in the following ISS footage compilation)

Posted by Permabear Doomster at 20:09:00
Email ThisBlogThis!Share to TwitterShare to FacebookShare to Pinterest

With Jackson Hole out of the way, we can now look forward to what should be the more dynamic trading period of September-November. Regardless of what the US election result is, it seems December is very likely to be something of a 'Santa rally' period. This would especially be the case if the Bernanke (or his successor) does some form of major QE at the FOMC of December'12. 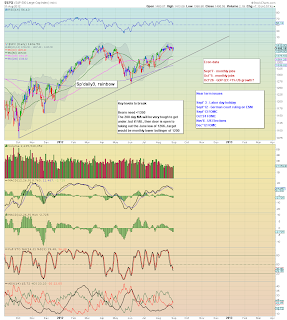 Without question, the doomer bears - those few remaining, need a clear break under the 1350 trend line, that links the recent June low, all the way back to the Oct'2011 low of sp'1074.

Until we see a few daily closes <1350' the broad uptrend can be said to be continuing, and the bears should remain very cautious.

As we've again seen lately, unless there is some significant sell side volume, the algo-bots will be able to melt up the market on near zero volume.

A real choppy day, but then, it was the day of 'benny @ the hole'. I'm sure a few day traders enjoyed the repeated intra-day swings of nearly 1%, I'm just glad its over with. 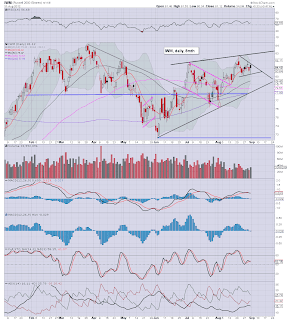 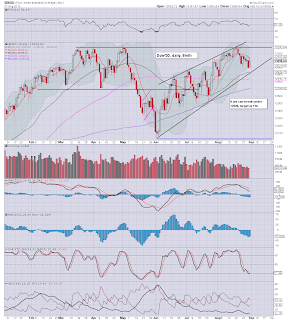 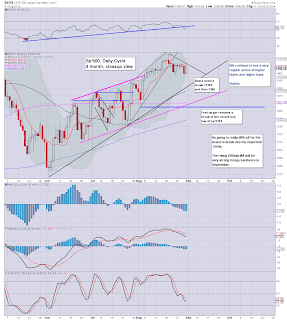 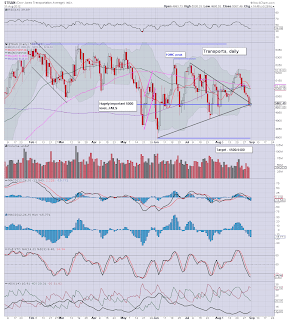 First, the tranny failed by a mere 7pts to close the month under the key 5k level. This has to be a disappointment for the bears who have been waiting since the spring. Oh well, we'll just have to wait another month.

Both the dow/Sp' closed higher, but the gains were well short of the morning surge, and we do close with something of a warning/bearish spiky top. Its not the most bearish daily closes, but it sure is not bullish.

As ever, the Rus'2000 small cap was the most volatile index today, and also the weakest. The daily black candle is a minor warning for next week, so thats something to keep in mind for Tuesday.


Farewell to the hole

With Jackson Hole now out of the way, I think we can start to look forward to the Sept-November trading period. It should be a lot more active, and we sure have some major events coming. There are still many expecting the fed to do QE at the next FOMC (although we've been hearing that for over a year), I still don't expect QE3 until the Dec'12 FOMC.

So, I will hold short across the long weekend, near term target is sp'1385/80, thats a mere 1.5% lower. We could easily gap down to that level on Tuesday, not that I've particularly high confidence in that scenario. As noted for some weeks now, until we break the cycle low of 1354, and see a few daily closes in the 1340s, the bears can not be confident about the autumn ahead.

Right now, sp'1200 seems an impossibility to many, but a long Autumn is ahead, there is plenty of time for one major down cycle before the Bernanke hits the QE button.