Seven weeks at 1400rpm inside a washing machine

With the indexes having another plainly stupid opening ramp on Friday, the bears are again beaten, confused, and wondering if a giant new rally phase is underway.

For many traders, the last seven weeks have indeed felt like being inside a washing machine on max spin cycle. 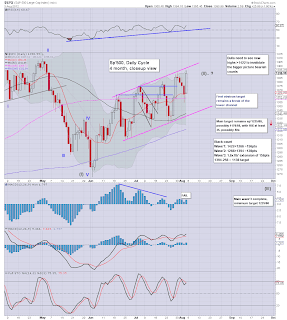 I called the floor at 1266, my target was 1365. As a permabear, I merely sat it out. After all, going long is even more stomach churning than losing money on the short side. So...I patiently waited for a few weeks.

Since early July, we've been regularly putting in higher highs..and higher lows. Until this pattern stops, it is clearly pointless for the big/serious money bears to attempt to short.
-- 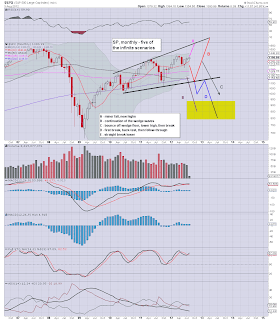 After all, according to the algo-bots and the deluded mainstream, if the central banks print more money, that will solve the underlying macro-economic problems...right?

There really isn't that much important US econ-data this coming week. Mr Market way well end up focused on the Eurobond yields of Spain and Italy. I suppose that offers a little downside via the usual concerns, but it sure doesn't inspire me much for a break of 1350.

For the bulls, a break above 1400 would probably lead to a test of the April high of 1422. At which point I'd guess just about all the doomers out there will have capitulated. Hmm.

So for the moment, the bears are all stuck in the washing machine, and after last Fridays action, its showing no sign of completing its turbulent spin cycle.

...from the city of Gold.
Posted by Permabear Doomster at 19:00:00
Email ThisBlogThis!Share to TwitterShare to FacebookShare to Pinterest
Newer Posts Older Posts Home
Subscribe to: Posts (Atom)