Which Story is the Right One?

Okay...lets take a look at two different scenarios. As a Permabear, it is always a battle to be open to both sides of the story, but I continue to challenge myself in that regard. 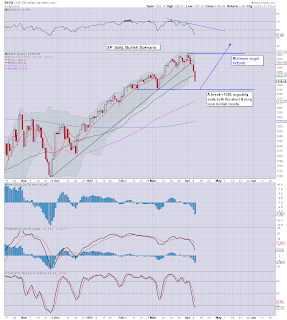 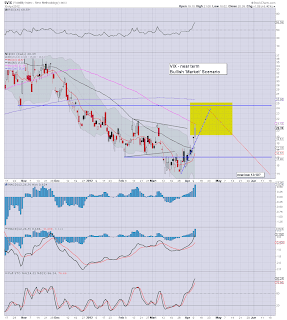 The simple bullish outlook is that we are very close to a floor - if not already. So long as the market does not break 1340 - a very major level, market should be fine to resume another major multi-month up cycle. First target would be 1435/40, with an ultimate upside target of 1550 (see monthly chart)

We have two major issues though to note. There is the constant threat of the Bernanke doing more QE - along with other ECB QE initiatives also. Second, there is the Facebook IPO. They sure won't be listing that wretchedly over hyped nonsense if the market is in freefall. I guess they could pull the IPO, but...its just something I think is worth keeping in mind. I think a lot of bears will be a lot more comfortable, once the ultimate hysteria social-media IPOs is listed. 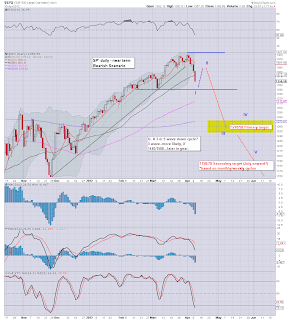 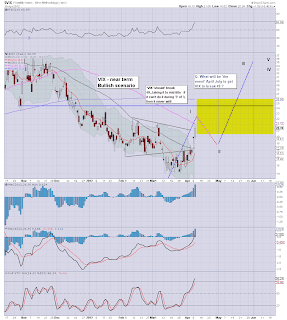 First, we have the very real possibility of a large H/S formation developing in the SP. The floor would be around 1340, and then a bounce back up to 1380/90, before a severe wave lower to at least 1270/50. A 'doomer' wave'3 would arguably target the monthly wedge/channel low of 1150... sometime between May and October - as the following monthly chart again highlights... 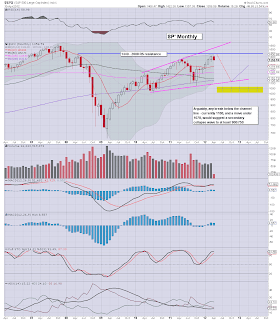 In terms of the VIX, and bearish count..we may have just completed a wave'1 higher..and now need to pull back for a few days, maybe even a week or two. What matters is we put in a higher VIX low, and then proceed to bust above the critical 24/25 level.


So, which story will it be?

As someone who is inclined to a more doomster outlook, I'd naturally say the latter. I could write a lot about how dire the fundamentals are, but plenty enough people are already doing that, just go see Zerohedge, Mish, or any of the other good sites. However, for now, I would just want to emphasise the following....

I've been thinking it over for the last few hours, and I have to come to this conclusion...

"What matters most of all, is how the monthly cycles close in April, if we see April monthly cycle close net-red, then it'll be flashing the first sell signal (even if its a moderate one) for over 7 months. Short positions, with 'serious money', can be taken with a stop at the April peak of Sp'1422."
-

My overnight posting (probably dealing with the Euro indexes) will be due around 9pm EST.

Posted by Permabear Doomster at 23:30:00
Email ThisBlogThis!Share to TwitterShare to FacebookShare to Pinterest

A quick update on where the hourly cycles closed.

*much more later this evening, including the VERY important moves in the Euro-indexes earlier today. 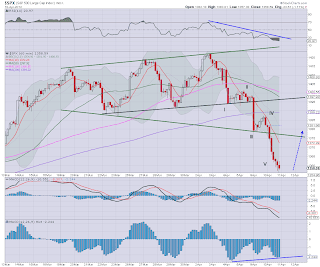 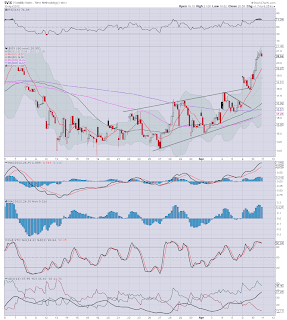 VIX putting in a few spiky tops, certainly starting to look like that's the max' for a few days at least, maybe even as long as 2-3 weeks.
-
More later.

Good wishes
Posted by Permabear Doomster at 21:08:00
Email ThisBlogThis!Share to TwitterShare to FacebookShare to Pinterest 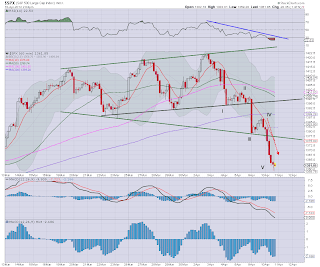 Looks like low 1360s is the very near term low.

*there is some serious technical damage being done on the weekly cycles though, and the monthly cycles are now starting to rollover.

Most bearish of all right now - the European markets, which got smashed up today.

More after the close.
Posted by Permabear Doomster at 19:06:00
Email ThisBlogThis!Share to TwitterShare to FacebookShare to Pinterest

Well, we're at the level the consensus of the regular chartists I follow had suggested.

Certainly, a fair few will be rattled by this mornings action. 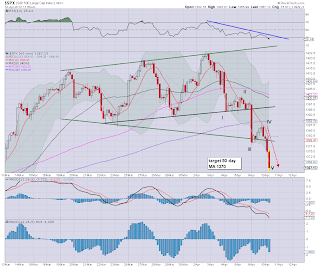 *yes, the 50 day MA failed to hold.
From a daily/weekly cycle perspective, the next main level is 1350
Posted by Permabear Doomster at 16:59:00
Email ThisBlogThis!Share to TwitterShare to FacebookShare to Pinterest 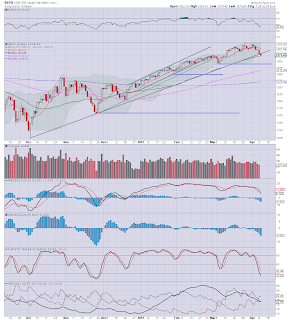 The 60min cycle remains massively oversold, but it can stay that way of course.

So...lets see if we bounce off the 50MA.
Posted by Permabear Doomster at 16:01:00
Email ThisBlogThis!Share to TwitterShare to FacebookShare to Pinterest

Just a quick look at the 15 and 60min cycles 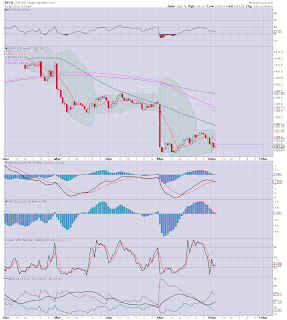 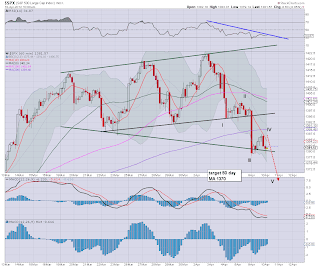 Hmm, I am still very suspicious that we'll still get down to 1370/65 within the next day or two.

I am not expecting much today, probably just sideways. The problem for the bulls is that sideways would just make for a very wide bear flag.

*We do have Alcoa earnings at the close, that will help motivate trade..one way or the other..into tomorrow.

Bear flag confirmed on the hourly chart.
If the count is correct, then we'll floor today before a proper multi-day cycle upward. Anything under 1365/60..and the larger doomer counts come back into play.
Posted by Permabear Doomster at 15:04:00
Email ThisBlogThis!Share to TwitterShare to FacebookShare to Pinterest

The two main precious metals are still on the slide. 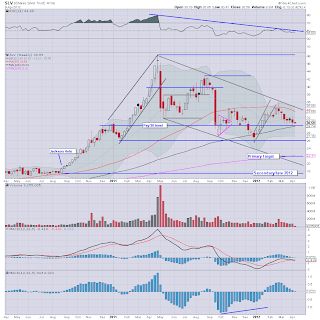 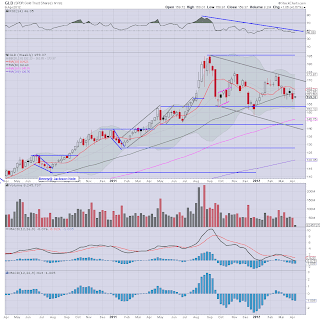 Neither of these two charts are good. Both are negative on all indicators. Silver especially is close to a snap-break if $30 fails to hold. Gold is only $40 away from triggering at least a moderate cascade to test $1500 again.
-

I can only guess the big metal bulls are very much waiting for the Bernanke to do QE3 this summer. Whether its some kind of MBS purchase scheme, or old-school POMO nonsense...we'll just have to see.

Good wishes for Tuesday trading
Posted by Permabear Doomster at 12:00:00
Email ThisBlogThis!Share to TwitterShare to FacebookShare to Pinterest

The Most Bearish Chart right now 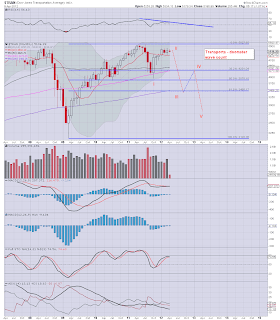 Now, this is indeed one of my old 'doomster' count charts. The transports is the last 'doom' count that I still have. All the rest have been violated in the last few months, and subsequently deleted.

Transports monthly cycle shows a VERY bearish 4 month flat top. The indicators are WEAK, and suggesting that there is real potential for a very significant move lower. Look across to 2008, I'm not saying we're at April'2008 (as I was some months ago), but we sure aren't cruising higher anymore. We're absolutely stuck. Doubtless, this is due in part to rising oil prices, but also...due to what is I believe some underlying weakness in both the US, and wider world economy.

The fact that official GDP is still positive, and still seeing net job gains, I'd certainly say that's something to largely dismiss.

If this was the only market index you followed, you'd be 100% short right now, with a stop at the 5350 level. This chart is something to think about tonight, now lets see how Tuesday goes.

Posted by Permabear Doomster at 03:00:00
Email ThisBlogThis!Share to TwitterShare to FacebookShare to Pinterest 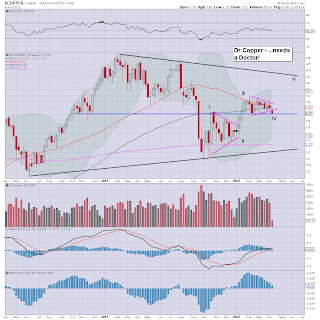 Looks like the 5' wave count is now invalid..and a major support level is about to be broken.