What level does the bullish case fail?

With the Friday jobs data failing to meet estimates, how low can the market go, before the bulls have to throw in the towel?

I've already highlighted the 60min cycle in the earlier post, so lets skip right to the daily... 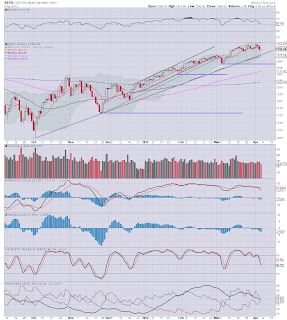 A very simple chart, but there are two points to note. First, the trend since October - linked to the November low, is STILL intact. It currently allows SP' 1380 without breaking. Second, the 50day MA at 1370 is a primary moving average from which the market could bounce.

So, the daily offers two very clear levels of 1380 and 1370. In the scheme of things, that is a mere 2% leeway for the bulls. Arguably a break into the 1360s would significantly threaten the overall bullish case for Sp'1440>. 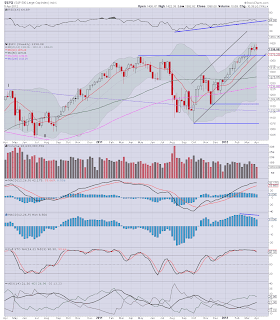 The weekly allows a drop to around 1370 - last summers peak, with the 10MA around 1375/70.
Arguably, even a drop to 1350 this coming week would not violate the primary trend on the weekly cycle. 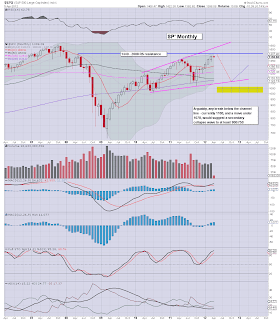 The monthly is not much use for very small near term moves, but again, its important to keep things in perspective. The primary cycle is still UP, only a red close end April would suggest something is perhaps changing.
-

Right now, my best guess would indeed be the 1380s at the immediate open, a few more trading hours could easily trend the market down to 1375/70. If market can rapidly break into the 1360s...and if the subsequent bounce fails at the 10MA on the 60min cycle, then....bulls have real problems.

One thing is for sure, Monday morning will be....dynamic.
Posted by Permabear Doomster at 19:00:00
Email ThisBlogThis!Share to TwitterShare to FacebookShare to Pinterest

The monthly job numbers are out, and they were a big miss. Not an apocalyptic miss, but still, it was almost 100k lower than the mainstream consensus were expecting.

March showed an official net gain of 120,000, vs expected 205,000. The underlying jobless rate fell from 8.3 to 8.2% - although once again, that appears largely due to people simply giving up/exiting the 'active' labour force.

How did futures react?  The following chart I've highlighted roughly where futures suggests we'll be Monday open - all else being unchanged. 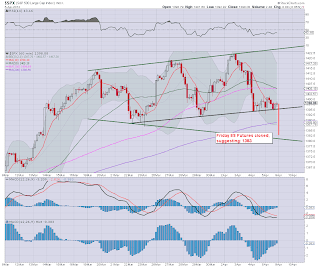 So, the bear flag played out (rather than it being a floor), and bulls look set to get whacked at the Monday open. All those Long the market (myself included), will need to don a heavy grade Flak jacket. Right now, futures wheel suggest the low 1380s.

A move into the 1370s would get me concerned, and if IWM breaks 80.00, then bears will be in control..for the first time since last October.

More across the weekend.
Posted by Permabear Doomster at 14:24:00
Email ThisBlogThis!Share to TwitterShare to FacebookShare to Pinterest

This is something every doomer out there should stare at for at least an hour sometime this 3 day weekend. 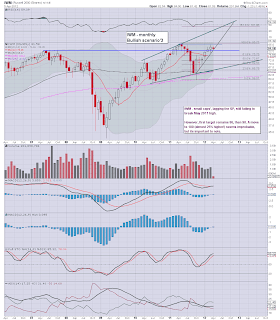 The Rus'2000 index is still lagging the Sp'500, and especially the dow, but the trend remains up.

From a MACD cycle perspective, I am looking for a smaller tower/block to form in the coming 2-3 months, and then rollover. From a price perspective, I'm still looking for a break over the key level of 86...and then peak somewhere in the region of 90/92..within a few months - this would equate to sp'1550 by June/July.

Such words will not be pleasing to any of the doomers out there, but for the moment, the trend is indisputably STILL up.

Unless the jobs data - or other weekend news event/story upsets the main market, the IWM 81/80 level will hold, and we'll soon snap up to 86..and a significant break through to even higher levels.