This is arguably the more exciting part of this weekends meandering thoughts from the doomster-bunker. The bearish outlook!

Okay, lets start with the near term...

Again, I will focus mostly on IWM, but the same pattern can be applied - to a large extent, to other indexes. 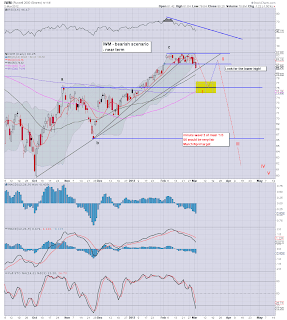 It would seem - not least supported from Fridays' action, that IWM should fall to around the 76 level. Considering the depth of the MACD cycle, a bounce - to re-test 80/81 seems very likely.
As noted, what then matters is critical....

Bears MUST see a lower high put in. If we break above 84 for any reason, ALL the bear outlooks should get thrown out (again!). 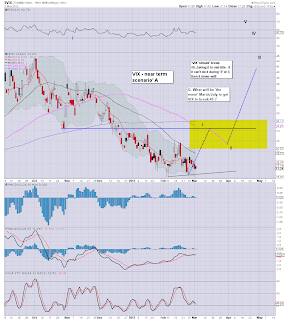 Bears will likely see VIX break into the mid 20s soon, but then..- as is usual, a typical retrace to 20, maybe even 19/18 again. What matters is that any retrace is brief and limited. By end March the doomers will want to see VIX breaking into the 30s..and beyond. Anything else, and the theory is likely cancelled out.

IWM - weekly, the 'high was put in last summer' theory 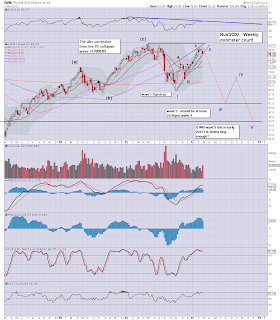 This assumes everything since October was indeed a wave'2 'abc' correction. Yes, some other indexes did break the summer 2011 highs, but NYSE, IWM, and Transports did not. Its highly debatable, and we will find out soon enough who is right.

Clearly if IWM breaks under 60, that would confirm the doomster outlook, and would set up the rest of the year for some extraordinary falls. 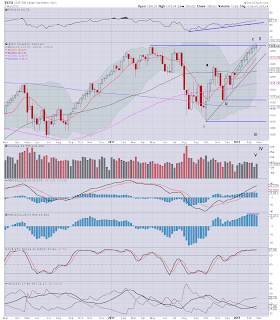 The SP'500 remains very strong. Yes, we broke the May 2011 high, but so far, its by mere points. Bears clearly need to see SP' break into the 1240s to conclusively confirm the abc wave'2 formation, and to open up a challenge to break last October's 1074 low. 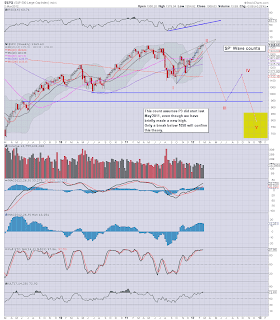 Again, critical key levels are around 1250, it would also be below any 'widening channel' theory that the bulls might attempt to see form. 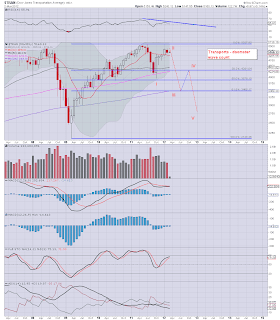 Transports remain the most bearish index out there. Of course, rising Oil prices will be seriously damaging profit margins in this sector - along with any general weakening in the economy. We do have a possible top now, but bears can only get excited if we see the Transports first break back below the massive psy' level of 5000, and then 4000. A move below 4000 would be a massive victory to the bears this summer. With Oil prices continuing to show upward movement, that will certainly help to pressure this index lower in the coming months.

Are the Bears ready?

The doomer bears will need to see March be their month. Anything other than a dominating and consistant fall in the main indexes - arguably to at least sp'1240 (at some point) is probably just a minor retracement, which would then see the bulls re-take control and whack the SP' to 1400+ very quickly.

The key levels to break are clear. That is a good thing of course, since stops can be set very tighly, and risk exposure can be limited.
-

In Part'3, I will outline a brief summary of where I believe we might be.
Posted by Permabear Doomster at 23:53:00
Email ThisBlogThis!Share to TwitterShare to FacebookShare to Pinterest

This weekend I've decided to separate things into 3 main postings

First, I wish to note that I remain fundamentally bearish in the longer term. There are simply too many huge ticking economic time-bombs that will detonate at some point. Whether its the money printing madness policy of the various central banks, systemic unemployment of the western economies, or simple resource problems (Oil, metals, agricultural land). There are so many massive issues, most of which remain largely being glazed over by the mainstream media.

However, what IS clear is that the infamous 'can', can be kicked down the road for some considerable time. Whether this can-kicking can be kept going for another year, 3 years, or even longer...lets set that question aside for now, but acknowledge that it is a very valid possibility the bears need to keep in mind.

I would argue that most indexes broadly track the same, so I'll generally stick to just one. I will note also that the Transports (the historic 'leader') has indeed lead lately, lower. The Rus'2000 is the second leader in my view, and is much more volatile than anything else right now.

So, lets look at the R2K. I will focus – and use charts, via the ETF equivalent of IWM, since that’s what I trade, via options, and for other traders via TZA/TNA. 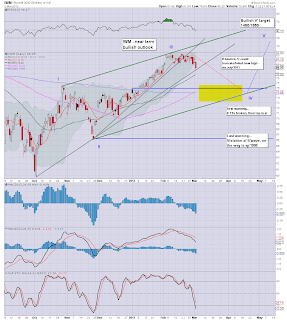 Near term, it looks like a retracement is underway. This coming week we seem likely to break the secondary - and more steep trend line, and then break lower to around the 76/74 level. Bulls will only need to be concerned if we see IWM in the 72s or lower. There is a LOT of strong support at many different levels. 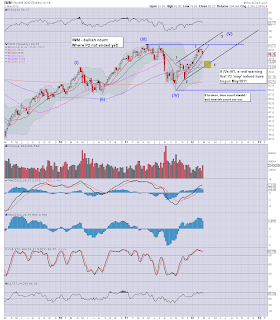 This count assumes that last May was NOT the start of the much touted P3 wave of destruction. Indeed, the fact that both Dow, SP, and Nasdaq indexes all broke the summer 2011 highs, would strongly suggest this 'final wave 5 UP' theory is correct. The most bullish outlook right now would maybe call for IWM hitting triple digits. Lets note that if we do pull back to around 75, such a move would mean the subsequent up cycle being a huge gain of 35% within just 6-9 months. 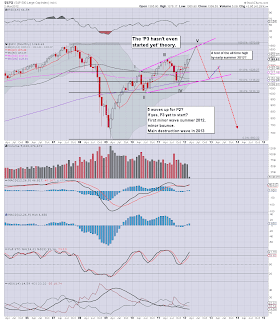 This outlook suggest a test of the all time index-high around 1550 sometime between early summer and late Autumn.


VIX - near term Bullish market across the summer 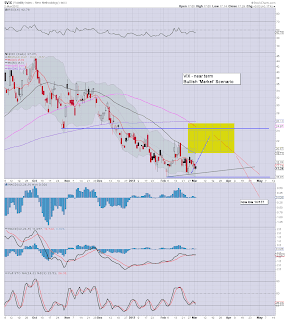 Are the bears about to see a cruel tease? The VIX does look set for some kind of surge upwards, but 24/26 may be as far as it gets. If so, then VIX will quite likely make new lows across the summer in the 13s..maybe even single digits -if the main indexes make an attempt to make new historic highs.

Can you imagine the hysteria of clown channel hosts touting '...isn't it great, VIX is under ten for the first time in many years, with the market set to break all time highs, EVERYTHING is fixed!'. Yeah, that sickening news item I can well imagine has already been scripted by some producer, just in case.

So, that's my brief summary on where we might be from the more bullish perspective.