Bears have an awful lot to do

To close another trading day where the volume was again 35% or so lower than normal (whatever normal is these days), lets reflect on what remains a new bullish up trend. 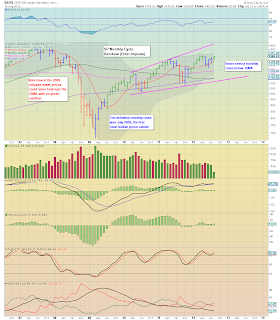 The task for the bears right now is really mountainous.

First, bears need a monthly closing under the 10MA of 1344. Does anyone really think we're going to be able to close August under the key 1350 level ? Sure, its only 3.5% lower from current levels, but the current trading atmosphere is that of a graveyard.

There seems nothing that is going to knock this market below 1350 before the labour day holiday of Monday Sept'3rd. So, at the current rate, we'll close August, and put in another green candle on the Elder Impulse 'rainbow' style charts. That has to be a VERY serious concern for any bear out there.

Personally, I am kinda desperate to see an August close under sp'1350, but it just does not look very likely right now. The daily charts on the big sp'500 and dow'30 indexes are suggestive of a top, but what matters is how we close the month of August, not the day to day action.