With the main indexes seeing some moderate swings after the FOMC announcement, the VIX similarly saw some chop, and only managed to close +0.45% @ 13.45. Near term trend remains to the upside, but even VIX 15s look difficult to close above any time soon. 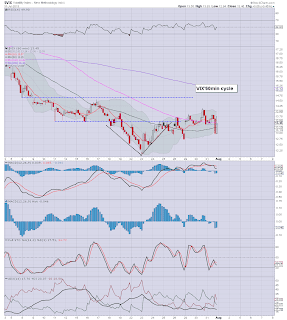 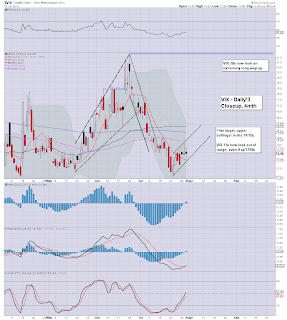 Certainly, this afternoon was pretty interesting for a mere market spectator.

Yet, the swings are still relatively minor, and the VIX remains at what is historically a bizarrely low level.

Underlying MACD (blue bar histogram) cycle is now positive cycle for the first time in over four weeks. The cycle is still turning back toward the equity bears, even if the indexes are still within 1% of their recent historic highs.
-

I've no doubt the VIX will at least get into the upper teens in late August, but consecutive weekly closes >20 - which is when things would start to get interesting, still look unlikely.
--