With the indexes closing lower for the second consecutive day, the VIX was battling to hold minor gains..but still closed moderately lower, -1.2% @ 13.62. However, the daily charts are highly suggestive a VIX floor is being put in. 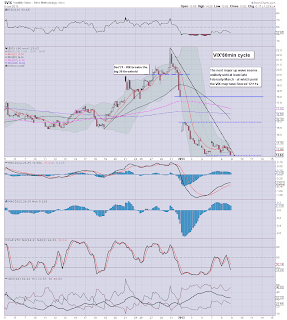 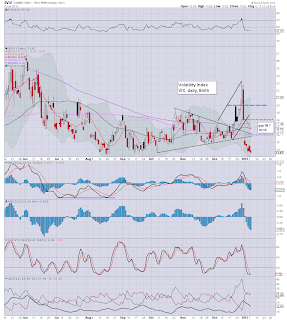 The sixth consecutive daily decline for the VIX, but despite the fall, the daily trading range is narrowing, and we're surely getting close to flooring.

A brief spike to at least the low 16s seems very likely, and that might well equate to the sp'1435/25 zone.

It would seem after a minor retracement - somewhere between sp'1440/25, the market will continue to rally into February, primary target would be 1510/20. If that is the case, then VIX in the 12s, if not 11/10, seems the likely mid-term outcome.